The reliance on herbicidal weed control in northern region fallows has led to widespread herbicide resistance evolution in major weed species. As glyphosate is the most widely used herbicide for fallow weed control resistance to this herbicide is increasing at an alarming rate. There is also increasing frequency of resistance to selective herbicides that are being introduced to try and manage glyphosate resistant populations. Alternate non-chemical weed control techniques are desperately needed that are suited to routine use in northern region cropping systems.

A rapid response tyne system has been developed with the operational specifications of being able to cultivate target weeds in a field when present at densities of up to 1.0 plant/10m2 at a travelling speed of 10km/h. To permit timely development, the rapid response tyne concept was based on the retrofit of a Shearer Trashworker tyne with a hydraulic breakout system. The Shearer Trashworker was chosen due to its robust build, reputation and prevalence across Australian cropping systems. Its hydraulic breakout system is typical of many other manufacturers’, thus permitting a design approach which could be adapted to accommodate other configurations. Although hydraulic systems are not traditionally used in such dynamic environments, to aid timely adoption and acceptance by farmers it was decided to not deviate too far from currently accepted and widely adopted agricultural machinery.

The traditional cultivator bars on currently accepted and widely adopted agricultural machinery are designed for continuous tillage and full-time tool-soil interaction. However the new application required detailed engineering to modify the hydraulic system and mechanism functionality and optimise performance while being highly constrained by the existing geometry. Therefore, developing an efficient and elegant rapid response tyne around a conventional cultivator was not straightforward.

The initial proof-of-concept design focussed on minimising the number of additional components and keeping the design simple whilst achieving the chipping action similar to a conventional hoe in approximately a third of a second. A modular approach to the design was taken so as to permit the system to be scaled readily as confidence in system performance was achieved. The Shenton Park rig provided the initial proof-of-concept and other rigs were used for weed kill testing (Figures 1A to C).

Field testing using the two prototype rigs at the two northern region locations (QDAF and Narrabri) was conducted on a range of fallow weed species. The rapid response tyne system was evaluated in a series of field trials for efficacy on weeds of winter fallows (annual ryegrass, wild oats, sowthistle and wild turnip) and summer fallows (barnyard grass, feathertop Rhodes grass, fleabane and sowthistle). At Narrabri summer and winter field trials the efficacy of the response tyne on the targeted weeds species established at eight growth stages (Table 1) was investigated.

As the initial mandate for the project was to develop the mechanical response tyne and not the sensor system, the evaluation experiments used a simple photo detector arrangement to trigger the response tyne. A reflector was aligned next to each plant in the plot trial and together with the known travel speed, the system was calibrated to trigger the rapid response tyne when the light beam aligned with the reflector and hence weed.

Significant engineering research, development and testing were conducted predominantly around the Shenton Park test rig at UWA (Figure 1A). As with any engineering design, the process involved iterative improvements to the design layout. Once the system was able to achieve a chipping cycle time of less than 400ms from actuation to return to standby position, and the design had been simplified and deemed reliable, the pre-commercial rig was designed and built. Detailed explanation of the engineering process and results will be presented in forthcoming publications. 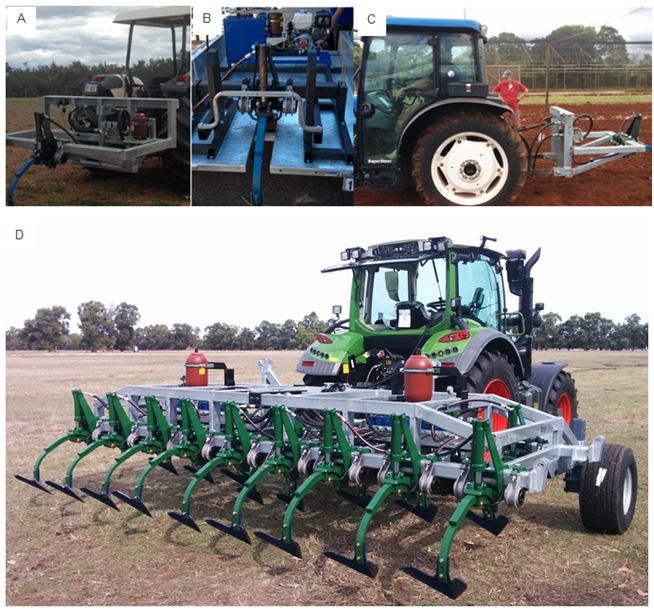 Weed kill field testing demonstrated very high efficacy on all targeted summer and winter annual weeds regardless of growth stage (Tables 1, 2 and 3). The survival of any weeds during testing was due to the design of the current cultivator sweeps not being suitable for the targeted tillage being carried out by the Weed Chipper. Weed control was 100% effective when the weed was targeted by the point of the sweep, however there was high weed survival when the weed was hit by the side of the sweep. There was also reduced efficacy when weeds were excessively large. When Feathertop Rhodes grass was >70cm diameter there was only poor control (Table 3).  The system is highly effective on both broadleaf and grass weeds with the resultant soil disturbance potentially being low (Figure 2).

The dash (-) indicates no treatments where there was partial contact of the tyne with the weed.

The dash (-) indicates that established weeds were either missed by the tyne (alignment issue) or the tyne did not activate.

The dash (-) indicates that established weeds were either missed by the tyne (alignment issue) or the tyne did not activate.

The efficacy of targeted tillage for weed control is firstly reliant on accurate weed detection. Given that the initial use of targeted tillage will be in fallow then it is appropriate that current available real-time detection technologies be incorporated in preparation for commercial use. Current boom spray mounted optical detection systems (Weed Seeker and WeedIt) are coupled to spray nozzles that can be rapidly triggered. Preliminary tests using the WeedIt sensing system to trigger the hydraulics on the Shenton Park rig demonstrated its high suitability to the fallow application. The WeedIt system was chosen as being the more suitable technology for the Weed Chipper and has now been incorporated into the pre-commercial Weed Chipper rig. Trials using the system coupled the 6m pre-commercial Weed Chipper, Figure 1D, are currently underway.

The response tyne’s mechanical nature enables it to control weeds with greater flexibility around environmental conditions such as surface temperature inversions, wind, humidity and heat. Its ability to handle a vast range of weeds at varying growth stages will likely reduce the number of passes required to manage fallow weeds compared to current herbicide practice and help mitigate the current slower travel speed and narrower coverage. The periodic tilling action required for low-density weed populations will also permit the Weed Chipper to be coupled to low horsepower tractors. With no direct need for chemical use the Weed Chipper system is an efficient tactic suitable for integration in an Integrated Weed Management system.

The research undertaken as part of this project is made possible by the significant contributions of growers throughout the trials, and the support of the GRDC. The authors would like to thank them for their continued support. The authors are grateful to Allan Spurling and Karl Teune from David Nowland Hydraulics (Bunbury, Western Australia) for developing the physical hydraulic circuit. The willing advice from Ray Harrington, Geoff Glenn and Mic Fels is also gratefully acknowledged.