Mungbean and soybean experimental data from NSW and Queensland (2013-2018) was pooled to allow the application of the ‘combined trial analysis’ technique. This approach is different to the analysis that is usually applied to data from regional crop trials. Combined trial analysis can be used to identify critical crop management and environmental drivers of yield across seasons and regions. This was the first time that this technique was applied to Australian mungbean and soybean data.

NSW DPI trial data from project DAN00171 2013-2018 was pooled with the Queensland summer pulse agronomy project (QDAF and QAFFI, UQ00067 2014-2018) to enable combined trial analysis by Kerry Bell, a specialist biometrician at the Statistics for the Australian Grains Industry (SAGI) group in Toowoomba. This kind of analysis has not previously been attempted for summer pulses in Australia. This paper summarises some of the key findings from the SAGI analysis and presents a new way to view and interrogate long term trial data for grain crops.

It should be noted that combined trial analysis is different to multi-environment trial (MET) analysis, which is used mainly by plant breeding programs to assess genotype x environment interactions. Combined trial analysis is appropriate for partitioning and contrasting data from long term and multi-locational studies with multiple fixed effects such as trials investigating agronomy and crop management. The broad objectives of the experiments conducted in the NSW DPI project were to:

Row spacing was categorised into narrow (25, 33, 35 or 40 cm), medium (50, 60 or 66 cm) and wide (100 cm) for consistency as the row spacing of planters and farming systems varied across sites. All yield data is expressed for the farming system used (i.e. yield for trials on a raised bed system are expressed for the whole hectare including unplanted furrows, and not for the bed top only). This allows more equitable comparison of yield across different farming systems and accounts for the benefits that are afforded by raised beds (e.g. improved drainage in irrigated systems). Actual established plant populations, not target, were used in all analyses. Findings from combined trial analysis for mungbean variety Jade-AU.

In total, there were 93 statistical ‘environments’ formed for this study from the 18 mungbean trials harvested in central and northern New South Wales and southern and central Queensland between 2015-16 and 2017-18. The field experiment sites were located from Emerald in central Queensland to Trangie in central west New South Wales. In some analyses not all the environments could be used as they did not meet the criteria for the particular analysis or there was missing data.

Analysis indicated that in changing from wide to narrow row spacing the predicted yield increase ranged from 150 to >600 kg/ha, or the equivalent of $105 to >$420 per hectare based on a grain price of $700/t.

The size of the predicted yield advantage of narrow row spacing decreased as the mean maximum temperature experienced by the crop for its duration increased above 35.6oC, with a predicted drop of 30 kg/ha for each increase in degree Celsius above 35.6oC.

When changing from wide to narrow row spacing there was a consistent increase in mean yield. The yield advantage of narrower row spacing (25 – 40 cm) compared to medium row spacing (50 – 66 cm) was not as clear.

The regression tree analysis of clustered trial data, shown in Figure 1, allowed further investigation of the effects that time of sowing, total in-crop water (total rainfall+ irrigation) and mean maximum temperature for the crop duration have on mungbean grain yield. This is a new way to look at long term multi-site trial data and to identify drivers of yield. 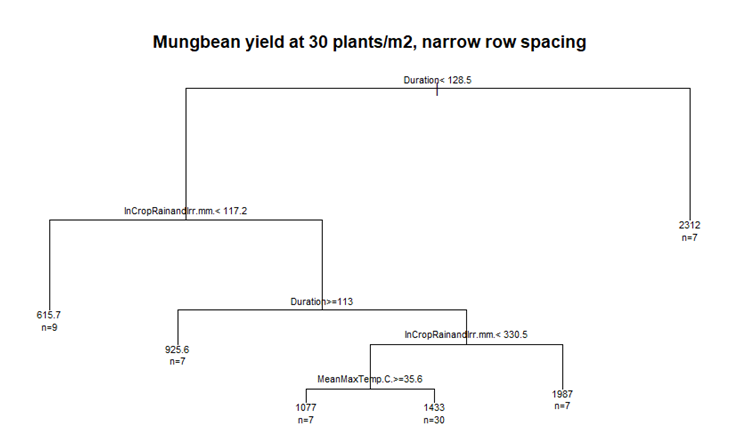 Figure 1: Results of a regression tree analysis of y=predicted yield of mungbean variety Jade-AU at 30 plants/m2 for narrow (25 – 40 cm) row spacing and x=environmental descriptors. The figure at the terminal node of each branch of the regression tree is the average predicted yield in kg/ha and the number of environments in this category. The critical environmental descriptor is shown at each branching of the regression tree. The first terminal node to be separated by the analysis (node number 6 on the far right when counting node 1 from the left) is crop duration (over 128.5 days) and shows the highest average yield (2312 kg/ha) for a group of 7 environments. The next most significant environmental factor is total in-crop rainfall and irrigation below 117.2 mm, which differentiates a group of nine environments with average yield of only 615.7 kg and so forth until the final, and notably largest, group of 30 environments is differentiated with mean maximum temperatures for the crop duration of over 35.6oC with an average predicted yield of 1433 kg/ha.
Source: Kerry Bell (SAGI) report to NSW DPI and QDAF, October 2018.

Particular focus was placed on time of sowing and irrigation regimes as commonly altered management decisions. However, the regression analysis identified other environmental descriptors such as total in-crop water (total rainfall + irrigation) and mean minimum temperature for the crop duration in addition to sowing date as contributing the most to describing predicted grain yield.

An estimated yield decline of 2.5 kg/ha/day was found for every day sowing was delayed after 1st October (the statistical date marker used for analysis). This should be interpreted by growers and agronomists as planting in the early part of the early sowing window recommended for their region to achieve yield potential.

After crop duration (the number of days from sowing to harvest), the total amount of in-crop water (rainfall events >5mm + irrigation) was found to be the next most significant environmental factor influencing yield, with total in-crop water of less than 117 mm resulting in significantly lower grain yields with an average of only 617 kg/ha.

Commercial soybean varieties are not broadly adapted across a wide range of production zones of northern Australia. Thus, each variety was analysed individually to avoid misinterpretations being made from the pooled data for multiple soybean varieties.

Thirty six soybean trials were conducted from 2012-13 to 2017-18 in nine locations including Trangie, Breeza, Narrabri, and Grafton in NSW and the Darling Downs in Queensland. This generated 58 statistically acceptable ‘environments’ for combined trial analysis. In some analyses not all environments were used as they did not meet the criteria for the particular analysis or there was missing data (e.g. yield data from inland NSW trials were lost due to flooding in 2016-17). Key findings and practical applications from the SAGI analyses are summarised as follows for the soybean varieties Moonbi and Richmond.

In some cases, the optimum yield for variety Moonbi was achieved at populations over 450,000 plants/ha, however, this is not recommended due to increasing known risk factors such as lodging and fungal diseases like Sclerotinia and soybean leaf rust. Growers and agronomists must, as always, balance these research findings with their understanding of the known risk factors in their individual paddocks and seasons.

For the variety Moonbi, there was an increased predicted yield potential of approximately 95 kg/ha or $66/ha based on a grain price of $700/t at optimal plant populations when the mean maximum temperature was below 30oC. This finding does not translate into a changed recommendation for soybean variety Moonbi per se, but it gives more insight into the factors driving yield in this variety.

Row spacing effects on variety Moonbi in inland trials, (central and northern NSW), showed that row spacing was not as critical a factor as plant population in driving the yield of this variety.

Time of sowing was consistently identified to be a critical driver of yield of variety Moonbi, which must be sown in the early window to achieve yield potential.

Soybean variety Richmond contrasted to variety Moonbi in many ways in this study including in its relationship to row spacing, which was found to have a significant effect on the yield of variety Richmond. Ten trials across inland NSW (Trangie, Breeza and Narrabri) and southern QLD included narrow (25 – 40 cm), medium (50 – 66 cm) and wide (100 cm) row spacing treatments and the variety Richmond. Analysis of these combined trial data at 300,000 plants/ha showed predicted yield increases of 292 – 592 kg/ha (or $204 to $414/ha based on a grain price of $700/t) in changing from medium to narrow row spacing. In changing from wide to narrow row spacing, yield increases of 301 – 474 kg/ha (or $210/ha to $332/ha) were indicated.

Optimum yield for variety Richmond decreased with later time of sowing across the six seasons of this study, but less markedly than for variety Moonbi. The recommended sowing windows for both varieties in NSW will not change as a result of this study. For inland central and northern NSW it is recommended to sow soybean in the early part of the sowing window to achieve yield potential.

The findings of this study strongly suggest that agronomic recommendations for soybean must be adapted to the variety and the farming system because the varieties in this study did not respond similarly to the experimental treatments imposed. Current ‘blanket’ recommendations for soybean in NSW (e.g. plant population) do not differentiate between varieties and must be adjusted to enable growers to achieve optimum performance and yield from newly released soybean varieties.

Key findings from the application of combined trial analysis

The combined trial analysis technique of regression trees cannot be applied to data from trials conducted in a single season, irrespective of the number of replicates included in the trials. The technique becomes more powerful with long-term (minimum of 5 seasons), multi-environment trials that provide a range of responses, preferably with overlapping ranges. Trial designs must contain the same core treatment parameters within each trial to allow statistical comparison of crop performance across seasons and production environments. Biometricians need to be involved in trial design before trials are planted especially where combined trial analysis is intended.

The necessity for large and long-term repeated data sets with no missing data is an important learning for future studies that intend to use combined trial analysis. In some cases a missing value, such as starting soil moisture, can prevent an entire data set from one environment being able to be included in the analysis.

Agreement between crop researchers is needed on a standard set of environmental measures to collect for all crop research trials (e.g. growing degree days, daily rainfall and temperature and irrigation). This will enable better interrogation of combined data sets, particularly for the identification and management of environmental factors on the yield of grain crops in Australia.

Grateful acknowledgement is made to Kerry Bell, Senior Biometrician at the Statistics for the Grains Industry (SAGI) group in Toowoomba for her expertise in achieving the first at combined trial data analysis for mungbean and soybean in Australia.

Technical support teams at all the NSW DPI and QDAF trial sites are gratefully acknowledged for their efforts in managing field trials to produce meaningful yield data from 2013-2018.