In rainfed environments typical of the eastern and southern wheatbelts, crops are typically sown on the first breaking rains but sometimes moisture accumulated through summer is too deep for sowing with conventional variety × drilling systems. Key to good leaf area development for tillering, growth and weed competitiveness is good crop establishment. An ability to establish wheat crops from seed placed 80mm or deeper in the soil would be useful in situations where the subsoil is moist but the surface dry. Seeding onto moisture at depth can assist to extend the opportunities for a greater portion of the cropping program to be sown in the traditional sowing months of May and June or earlier in April following summer rain. A separate but concerning issue is the influence of increasingly warmer soil temperatures on reductions in coleoptile (the shoot that grows from the seed and allows seedling emergence through the soil) length. Earlier sowing into warmer soils will reduce coleoptile length by as much as 60% so that a variety such as Mace with a 75mm coleoptile at 15°C will likely have a 40mm coleoptile at 25°C soil temperature. Some seed dressings and pre-emergent herbicides can further reduce this coleoptile length and affect establishment.

The green revolution Rht-B1b (syn. Rht1) and Rht-D1b (syn. Rht2) dwarfing genes reduced plant heights to reduce lodging and increase grain yields and so are present in most wheat varieties worldwide. Their presence also reduces the length of the coleoptile by as much as 40%. This reduces crop emergence when sown at depths greater than 50mm, tiller number and leaf size to reduce water-use efficiency and weed competitiveness.

A range of alternative dwarfing genes have been identified in overseas wheats with potential to reduce plant height and increase yields, while maintaining longer coleoptiles and greater early vigour. Some of these genes (e.g. Rht8 and Rht18) have been used commercially overseas but have not been assessed for use here in Australia. We reduced the larger global set of alternative dwarfing genes to Rht4, Rht5, Rht8, Rht12, Rht13 and Rht18, and then developed linked DNA-markers to assist with breeding of these genes in a commercial breeding program. Separately, we then bred these genes using conventional and DNA-based methods into the old, tall wheat variety Halberd for testing and disseminating to Australian wheat breeders.

While switching to new dwarfing genes will remove the growth inhibition on early growth, there is a need to promote coleoptile growth, particularly in the presence of conventional dwarfing genes. A gene with major effect on coleoptile length was identified in current wheat cultivars. Through a GRDC funded project, we demonstrated that the gene not only increased coleoptile length but also emergence with deep sowing in field trials conducted over three years at Yanco NSW (Figure 1). The gene was tagged with molecular markers and tested in a wide range of Australian wheat germplasm. We estimated that only 10% of recently released cultivars carry the coleoptile growth promoting gene. The markers were distributed to Australian breeding companies to assist with the selection and the expected increase of gene frequency in future cultivars. Additional genetic variation for coleoptile length and early growth exists in elite germplasm. For breeders to take full advantage of this variation, additional genes controlling this trait need to be identified and tagged with markers for efficient selection and combining growth promoting genes for even better performance. Figure 1. Emergence of wheat commercial cultivars carrying conventional dwarfing genes and tall isolines in Young background in the NSW MEF at Yanco in 2016. Sowing depth treatments were 25 mm and 70 mm depth. 12 cultivars and 12 isolines were grouped according to the presence of the coleoptile length promoting gene (BB, long coleoptiles) and the lack of the gene (AA short coleoptiles). 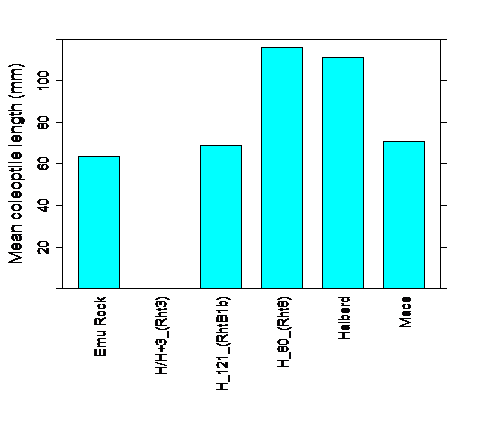 Figure 2. Coleoptile lengths of a tall wheat genotype (Halberd) and genotypes with dwarfing genes Rht-B1b (syn. Rht1) and Rht8 emerging in the field in a Halberd background. Emu Rock and Mace are current commercial cultivars with Rht-B1b and Rht-D1b, respectively.

The most likely useful new dwarfing genes, Rht13 and Rht18, have been bred into a range of current commercial wheats (Figures 4 and 5). Long coleoptile wheat breeding lines in Mace, Scout, Espada, EGA Gregory and Magenta have been delivered to Australian breeders for testing and use in breeding. If there are no problems with these new dwarfing genes, we may see the first of the long coleoptile wheat varieties in 3-4 years in NVT testing!

Although there is real promise in the new genetics, there is significant opportunity in coupling new genetics with new existing seeding technologies. Deep sowing is an issue overseas and in the eastern Australian states. The availability of moisture-seeking points commonly used elsewhere should allow the reliable placement of seed at depths of 100mm or greater. These points produce a slot deep into the soil at the base of which a seed is sown at 10-50mm depth. That said, further research is required aimed at tools and methods assessing across different moisture-seeking points to optimise seed placement at depth across a wide range of soil types. Weeds cost Australian grain growers an estimated $4B annually through lost production, reductions in crop quality, and herbicide use. These costs are unlikely to reduce with pressure on new actives in the widespread development of herbicide resistance in multiple weed species. Observed differences across cereal species and wheat varietal differences in crop competitiveness with weeds, provides impetus to use breeding and genetic improvement to aid in-crop weed control. In wheat, comparisons across a historic 100-year set of varieties highlighted that older varieties were more competitive with weeds.  Presumably, this reflects selection for improved performance in the absence of in-crop herbicides. Overseas studies have demonstrated a reduction in herbicide use of up to 50% when using weed-competitive wheats, while a broader benefit is in integrating competitive varieties with cultural management (e.g. weed seed harvest and tillage) to slow herbicide resistance and reduce herbicide use.

Competitiveness can be thought of as the partial to complete suppression of competing weeds to increase crop yield, or the ability of a variety to tolerate a competitor to maintain higher yields. Selection for greater tolerance is a breeding strategy for many crop insects and diseases but is of less value in weed management as low numbers of weed survivors replenish the seed bank for the next season. In turn, breeding of competitive crops has focussed on selection of genotypes that can better access light, water and nutrients to suppress the growth of weeds. Greater early vigour, as rapid leaf area development and biomass at stem elongation and altered root architecture are mechanisms that contribute to the ability to out compete weeds.   Root exudates used in plant defence (allelopathy) may also slow the growth of neighbouring competitors.

Breeding companies are limited in their ability to develop and deliver new traits. The identification of new opportunities that will deliver greater grower profitability together with development of a clear value proposition will allow for pre-breeders to identify those traits and their underlying genetics and methods in selection for uptake by commercial breeders. In the case of weed competitiveness, the genes for weed suppression have come from outside existing breeding programs and include old Australian varieties and overseas landraces. Parental germplasm has been developed over many years and intercrossed into modern Australian varieties. Together with high-throughput selection methods, these populations have been delivered to Australian breeders for use in their commercial breeding efforts toward new weed competitive wheat varieties. 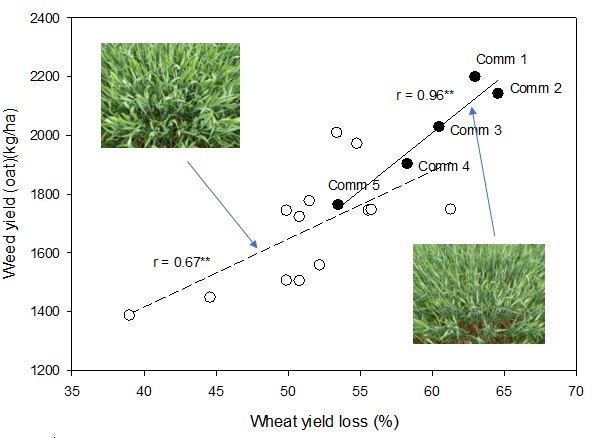 Figure 4. Relationship for yield loss in wheat and growth (as yield) of a weed mimic (oats) for breeding lines (○) and commercial wheat varieties (●) in field plots.

Wheat breeders now have the new dwarfing genes to breed longer coleoptile wheat varieties. Genes that increase coleoptile length have also been identified and tagged with markers. These genes are expected to play an important role in improving emergence from depth in the presence of conventional dwarfing genes. Matching new genetics with appropriate agronomy and technologies should ensure the emergence and establishment of deep-sown wheats, particularly when sown early to make use of summer rains sitting deep in the soil profile or to increase sowing opportunities in the traditional months of May and June. 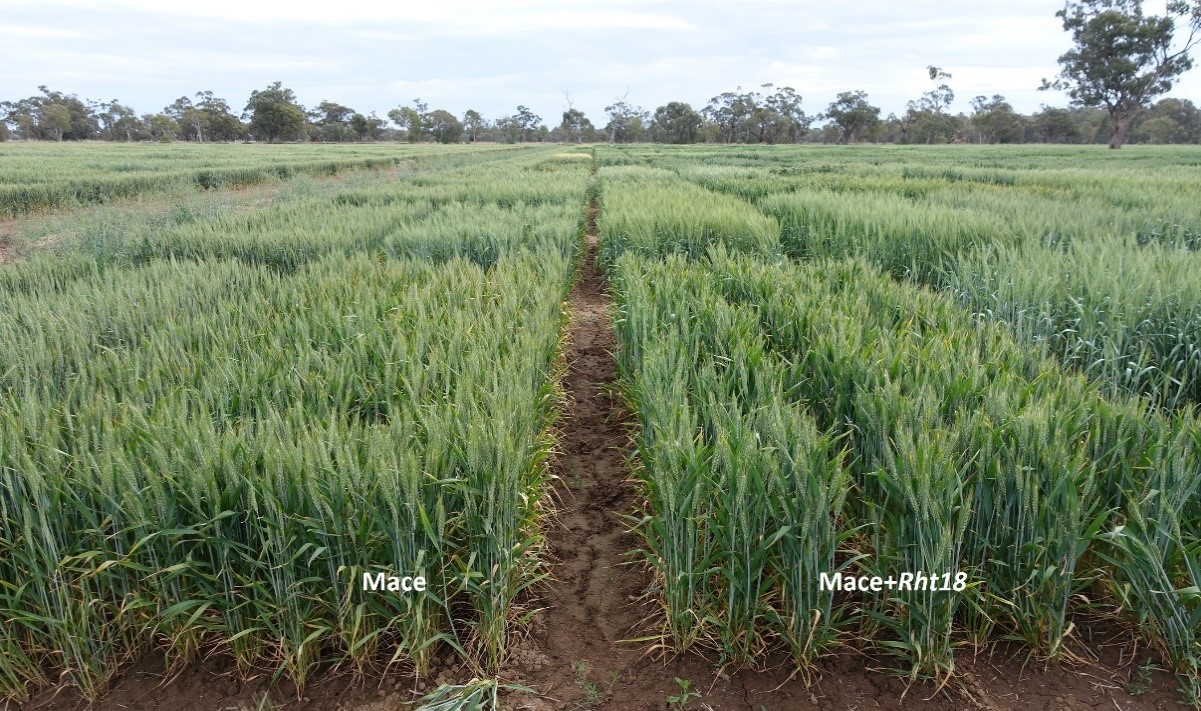 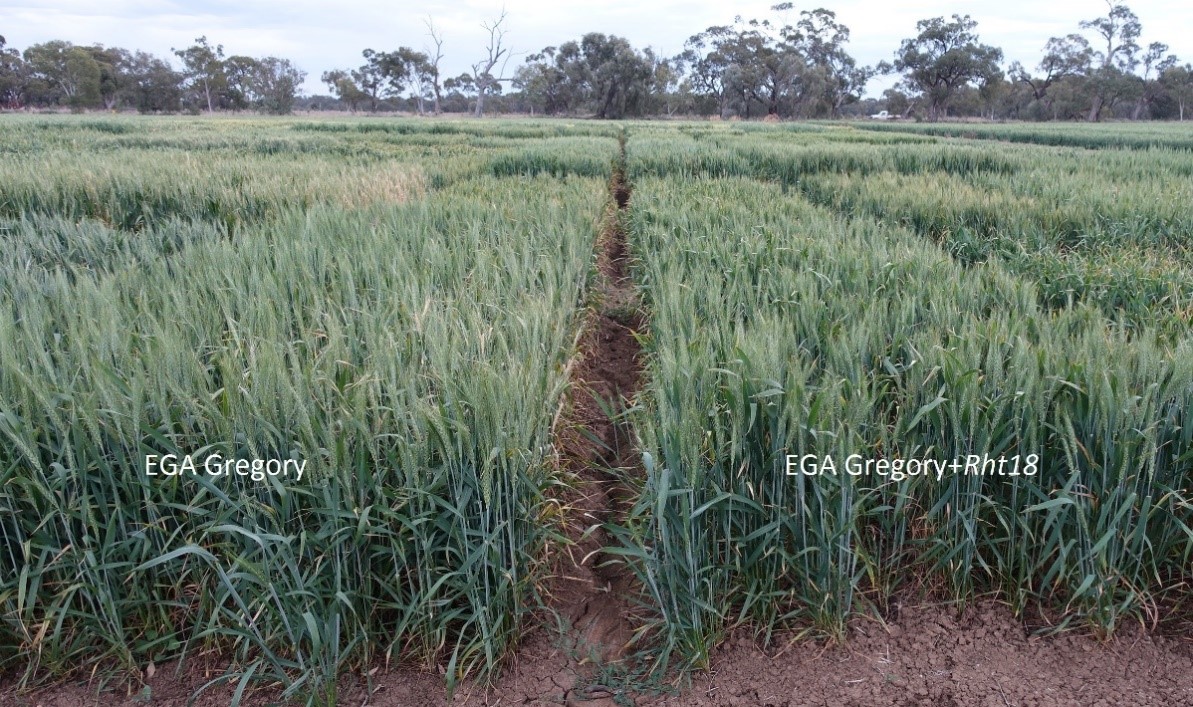