The three most common species of fleabane in the northern grain region of Australia are flaxleaf fleabane (Conyza bonariensis), Canadian fleabane (Conyza canadensis) and tall fleabane (Conyza sumatrensis). In some cases, all three species grow together in the same area.  This can be morphologically confusing, especially at early growth stages. Correct identification is important when selecting effective management options. 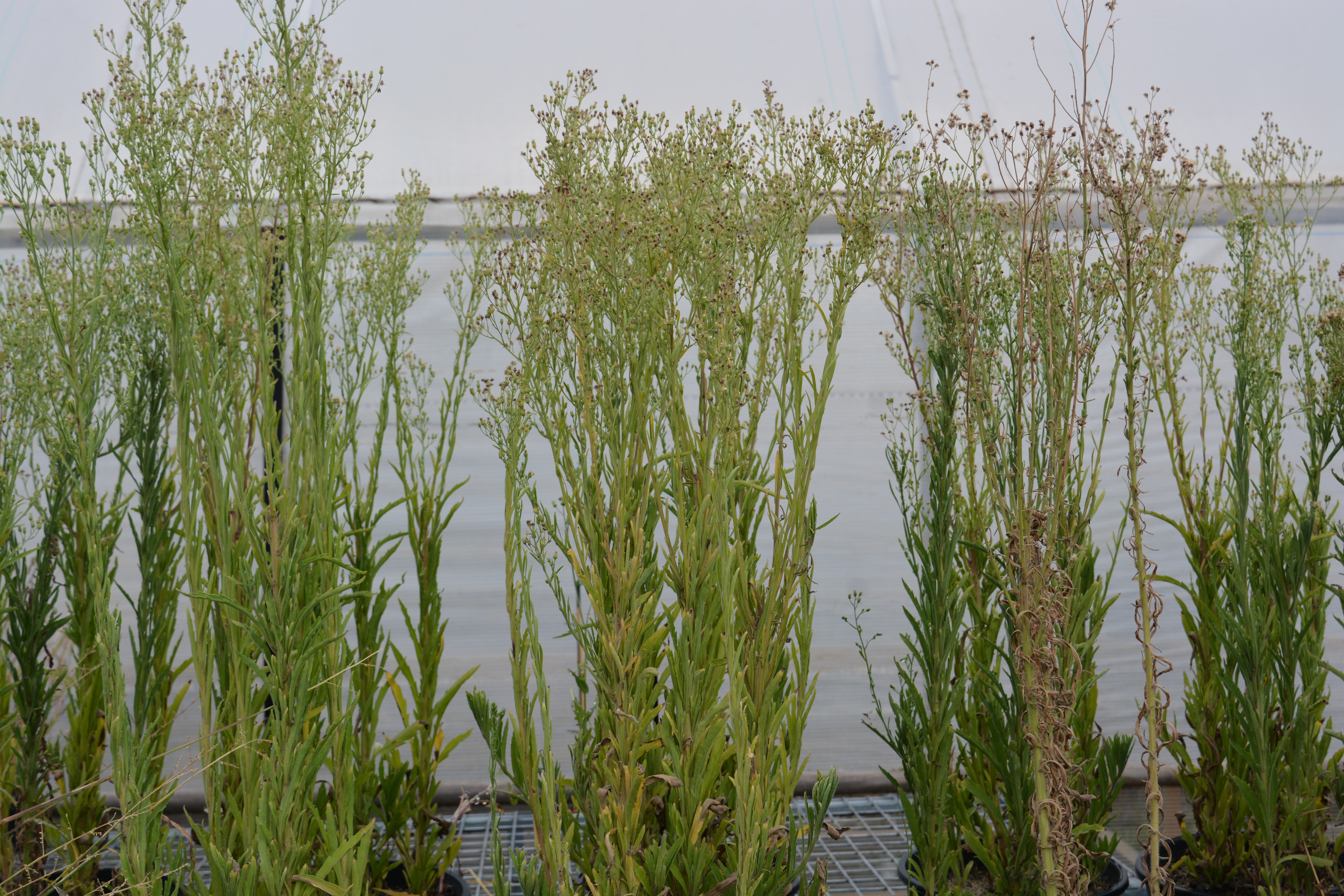 Tall fleabane reproduces by seeds, which are easily dispersed by the wind. Our initial trials suggest that its seeds have very low or no dormancy, suggesting that seeds can germinate immediately after dispersal provided that moisture conditions are favourable. Tall fleabane seeds can germinate throughout the year, but growth remains slow during winter.

Tall fleabane has the potential to produce high seed numbers. Similar to flaxleaf fleabane, tall fleabane seeds carry their own pappus, enabling them to be easily lifted and dispersed by wind over a long distance. Such traits make tall fleabane a problematic weed, especially if its biotypes have evolved resistance to non-selective herbicides. These seed traits also highlight the importance of controlling weeds on irrigation channels, embankments, and along fence lines and roadsides.

Flaxleaf fleabane seeds may lose their viability within two years when present in the surface layer. Although there is no such information available for tall fleabane, the lack of dormancy in tall fleabane seeds suggests that the prevention of seed set over two years should be effective in running down its seed bank.

Recently, tall fleabane biotypes resistant to paraquat and glyphosate have been identified. We collected one resistant biotype from Dalby (Dalby biotype, hereafter) and one susceptible biotype from Gatton (Gatton biotype, hereafter). The rate response analysis showed that the Dalby biotype was 6 times more resistance to paraquat than the Gatton biotype, requiring 3.5 L/ha paraquat (250 g ai/L) to kill 50% of the plants (6-leaf stage) of the resistant (Dalby) biotype compared to 0.6 L/ha paraquat (250 g ai/L) to achieve the same result for the susceptible (Gatton) biotype (Figure 2). Note: the maximum label rate for use of paraquat as a broadacre fallow application (Gramoxone 250 g ai/L label) is 2.4 L/ha. 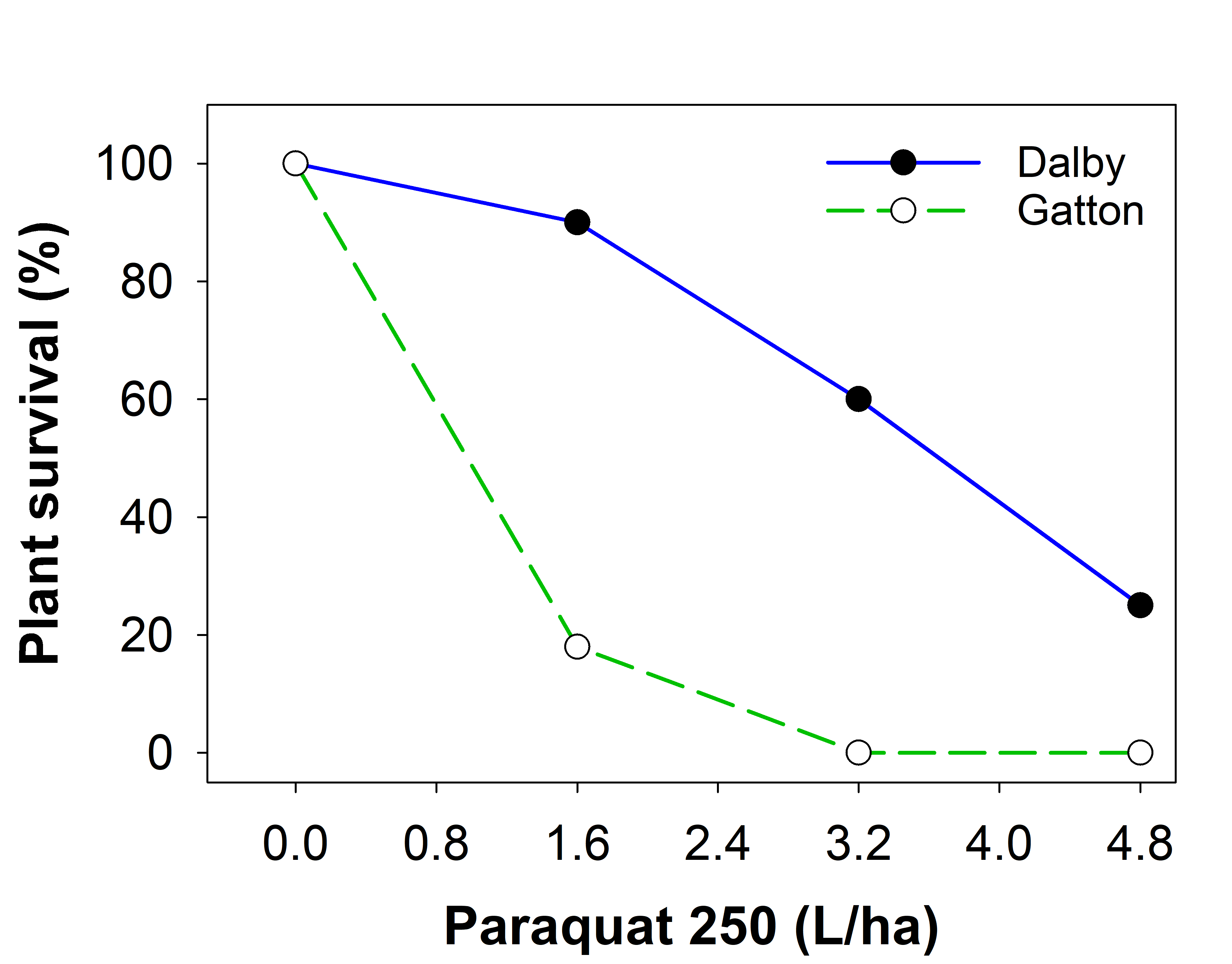 Figure 2. Effect of paraquat (250 g ai/L) (L/ha) dose on plant survival (as a % of the untreated control treatment) of the
Dalby and Gatton populations of tall fleabane

While glyphosate 450 g ai/L used alone is not effective and is not a recommended treatment for any fleabane species in fallow, the Dalby biotype was 3.5 times more resistant to glyphosate than the Gatton biotype. Under near ideal conditions, the susceptible biotype required 1.2 L/ha glyphosate (450 g ai/L) to kill 50% of the plants (4-leaf stage), compared to 4.3 L/ha glyphosate (450 g ai/L) to achieve the same result for the resistant biotype (Figure 3). Note: the maximum label rate for use of 450 g ai/L glyphosate as a broadacre fallow application is 2.4 L/ha. Figure 3. Effect of glyphosate (450 g ai/L) (L/ha) dose on plant survival (% of the non-treated control treatment) of the
Dalby and Gatton populations of tall fleabane

In another pot trial at the University of Queensland, Gatton, tall fleabane plants were sprayed at 4-leaf (3-cm in diameter) and 14-leaf (12-14 cm in diameter) stages with different herbicide treatments: glyphosate (450 g ai/L) (1.5 L/ha), paraquat (250 g ai/L) (2 L/ha), 2,4-D (700 g ai/L) (1.5 L/ha), 2,4-D (300 g ai/L) plus picloram (75 g ai/L) (1 L/ha), and saflufenacil (700 g ai/L) (17 g/ha+ 1% Hasten). There was an untreated control for both leaf stages. More than 95% of the Dalby biotype plants survived following the application of glyphosate at the 4-leaf stage, whereas no plants survived for the Gatton biotype (Figure 4a), again suggesting a high level of glyphosate resistance in the Dalby biotype. Regardless of biotype, other herbicides applied at the 4-leaf stage had no surviving plants. Note: the maximum label rate for use of 700 gai/L 2,4-D (Amicide Advance 700) as a broadacre fallow application is 2L/ha and is not recommended as a stand-alone treatment for fleabane in the fallow.

Under ideal conditions in the laboratory, only saflufenacil provided 100% kill of the plants of both biotypes when applied at the 14-leaf stage (Figure 4b). Such an outcome would not be expected at this rate on weeds of this size in the field and there is no label recommendation for this weed stage at this rate.  Regardless of biotype, more than 75% plants survived following the application of glyphosate, 2,4-D and 2,4-D plus picloram. Except for saflufenacil, all other herbicide-treated pots had 100% survival of the Dalby biotype. Paraquat application at this stage was still effective on the Gatton biotype (only 8% plant survival). 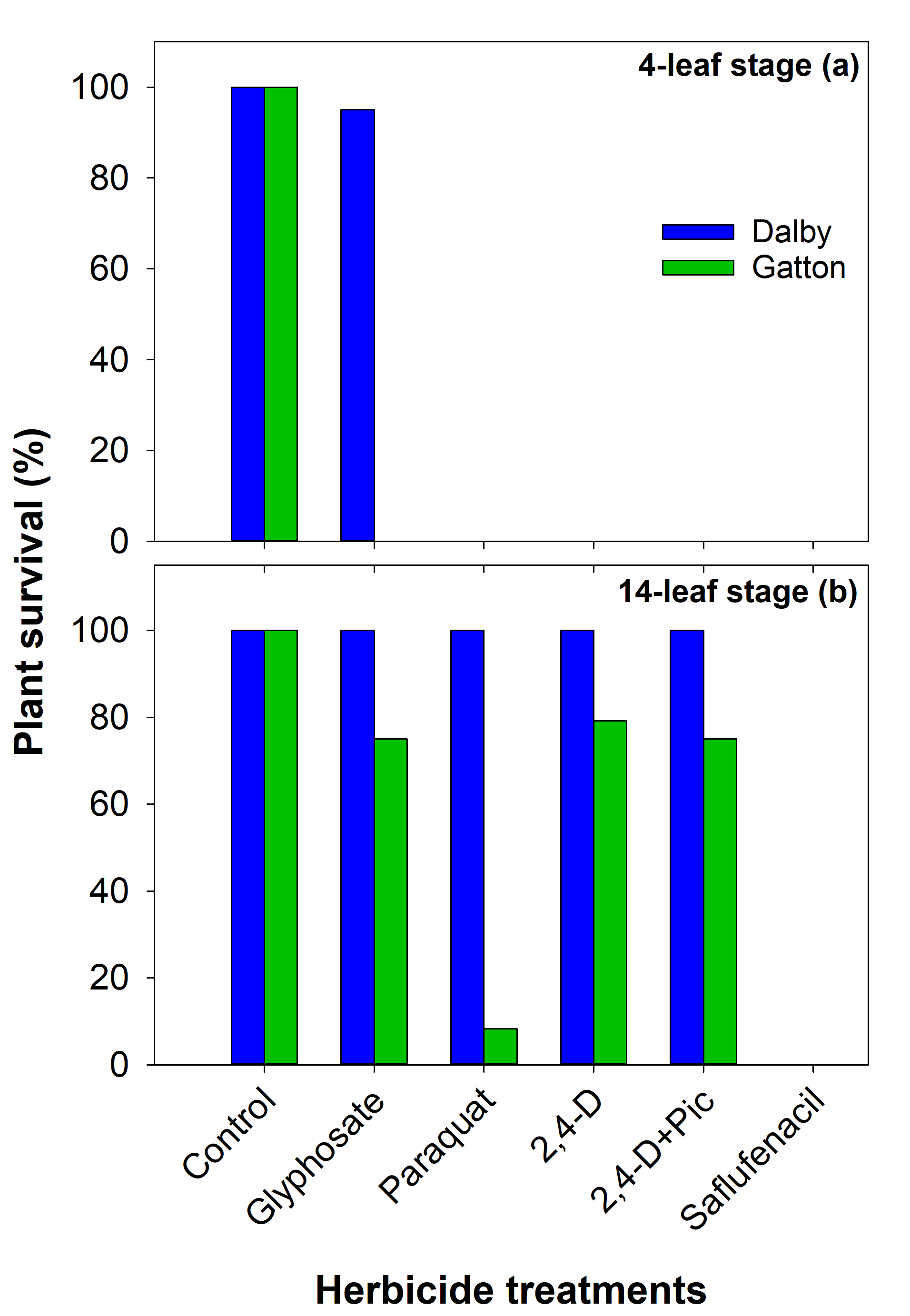 Figure 4. Effect of different herbicide treatments on survival (% of the non-treated control treatment) of the
Dalby and Gatton populations of tall fleabane when applied at 4-leaf (a) and 14-leaf stage (b).

The results clearly highlight the importance of growth stage, regardless of biotype, when applying herbicides. Leaf stage or plant growth stage becomes very important when the target plant is herbicide resistant. Tolerance to herbicides in large plants is very common due to their ability to rapidly metabolise the herbicides. In general, it can be difficult to consistently time spraying operations on very small plants. Growers may wait for more weeds to emerge so that they can target a larger number of weed plants, or spraying could be delayed due to unsuitable weather patterns. Also, all weeds are not found at the same stage in field conditions. Therefore, there is a need to evaluate the effect of herbicide mixtures and double-knock herbicides. As the Dalby biotype was resistant to both glyphosate and paraquat, the standard double-knock herbicide components may not work on this and similar biotypes. Saflufenacil could be included as a potential second-knock option for the control of tall fleabane biotypes.