The aim of this study was to determine the loss in wheat yield due to competition from five new emerging winter weed species in Western Australia. The extent of yield losses due to weeds depends on their density, time of emergence and species.

Weeds compete with crops for resources including nutrients, water and light (Neito et al 2009). Competition from weeds is the most important of all biological factors that reduce agricultural crop yield (Gallandt and Weiner 2015). In Western Australia (WA), some minor weeds are now emerging as major weeds with greater infestation and frequency (Hashem et al 2017). Crop–weed competition studies can provide valuable information to growers and land managers on whether weed control is warranted (Swanton et al 2015). The extent of crop loss from five emerging weed species (barley grass, great brome, doublegee, sowthistle and wireweed) has not been investigated in intensive no-tillage cropping systems in WA. These weed species were identified as a research priority by GRDC’s Regional Cropping Solutions Network (RCSN) groups.

Table 1. Agronomic details of the trial. 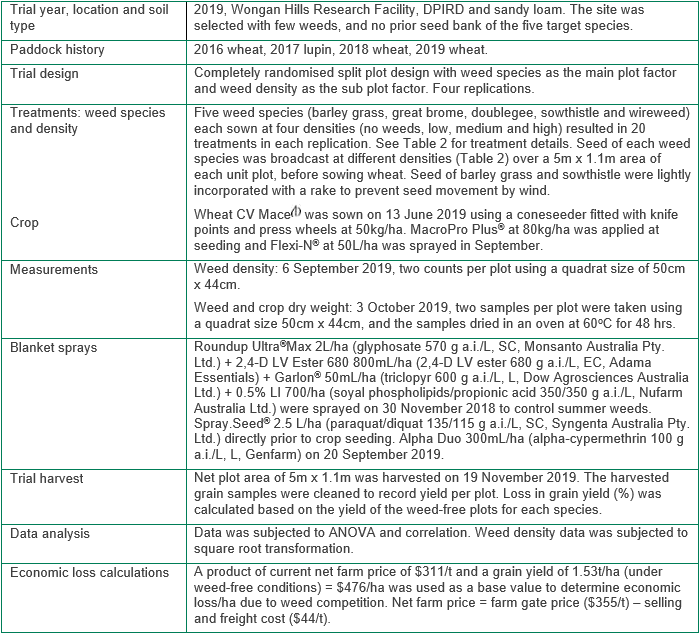 Emergence of weed species was low compared to the sown densities (Table 2). Barley grass recorded the highest plant establishment of 144 plants/m2 (averaged across densities), while wireweed had the lowest density of six plants/m2. Averaged over all species, density increased with increasing sowing rate (Table 2). The density of great brome and sowthistle increased significantly from zero to ‘high’ seeding density. For barley grass and doublegee, plant numbers increased significantly from a seeding density of zero to ‘medium’ density, but the increase was not statistically significant from ‘medium’ to ‘high’ seeding density (Table 2).

Table 2. The number of weed seeds sown per m2 in each treatment and the observed weed densities (‘weed free’ – ‘high’) per m2 in 2019 at Wongan Hills. Figures are back-transformed means from the ANOVA and figures in parenthesis are square root transformed values of weed densities. P-value for the weed species and density interaction was <0.001. LSD (0.05) was 1.86 to compare densities within a species and 2.17 for the species by density interaction.

Great brome grass recorded the highest dry weight of 0.6t/ha (averaged across densities), followed by barley grass (0.3t/ha), doublegee (0.096t/ha), sowthistle (0.038t/ha) and wireweed (0) (Figure 1). Even though barley grass had 47% more plant numbers/m2 than great brome, it had 48% less dry weight than great brome. However, ecotypes of barley grass are often smaller than great brome in WA. When these weeds were grown in controlled conditions at Northam, the seed-head height of barley grass ranged from 9 to 31cm, compared to 14 to 84cm for great brome plants (Borger and Hashem 2019). At the time of weed dry-weight sampling in October, wireweed was at the 3-8 leaf stage and its dry weight was less than 0.01t/ha across all densities. The correlation co-efficient between weed number and weed dry weight across species and densities was 0.74.

Great brome competition reduced wheat grain yield by 32% compared to the weed-free treatment. Yield reduction was 24% for barley grass, 9% for wireweed, 5% for doublegee and 4% for sowthistle (Figure 1). 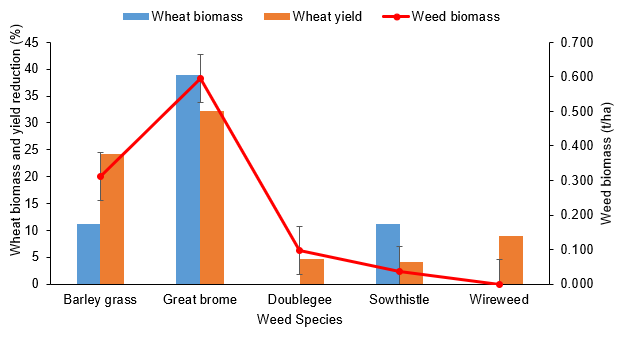 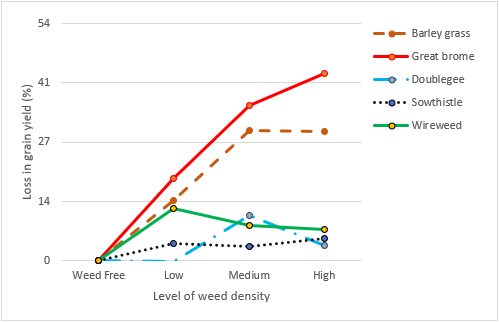 Figure 2. Reduction in wheat grain yield due to different densities of weed species during 2019 at Wongan Hills Research Facility. The grid lines are one LSD (5%) apart. For the level of densities (sown and observed) of each species, refer to Table 2.

The results of this trial show that uncontrolled weeds in a wheat crop can cause substantial economic loss. Great brome at the highest density of 140 plants/m2 with 0.7t/ha dry weight, reduced wheat grain yield by 43% resulting in an economic loss of $205/ha. Barley grass at 197 plants/m2 with 0.45t/ha dry weight caused 29% reduction in grain yield and $138/ha economic returns. Other weed species resulted in a maximum of 5-12% reduction in grain yield and $24-57/ha economic returns. The research highlights the competitive impact of great brome and barley grass on wheat crops and confirms the results of the 2018 season trial carried out at Wongan Hills (Hashem et al 2019). Brome grass and barley grass are ranked as the fourth and ninth most detrimental weeds in Australia, with an annual revenue loss of $22.5 and $1.7 million respectively (Llewellyn et al 2016).

Competitive ability of weed species can vary between different ecotypes. For example, some great brome and barley grass populations have developed late emergence in South Australia to avoid control by pre-emergent herbicides, but this late emergence is likely to reduce their competitiveness against crops (Gill 2007). Growers need to understand the characteristics of their own populations. The research presented here highlights the importance of controlling these weeds early in the season to minimise grain yield losses in wheat.

The research results that form this paper was undertaken by Glen Riethmuller and Abul Hashem as part of ‘Emerging weed-seedbank biology’ project (UA00156).It was made possible by the significant contributions of growers through both trial cooperation and the support of the GRDC; the authors would like to thank them for their continued support. We are thankful to Shari Dougall and Bruce Thorpe at the DPIRD Wongan Hills Research Facility for running the trial, and Dave Nicholson, DPIRD for his assistance. Thanks also to Dr Gurjeet Gill, University of Adelaide for research collaboration. The paper was reviewed by Alex Douglas, DPIRD Katanning.