Deep ripping - where it will work (and where it won’t)

There has been recent interest in the potential benefits of deep ripping in the Australian grain industry. In Western Australia (WA), a range of GRDC investment projects (DAW00242; DAW00243; DAW00244) led by Steve Davies and colleagues have conclusively demonstrated the benefits of ameliorating sandy duplex soils using a range of soil inversion, mixing or loosening techniques such as ploughing, spading and deep ripping. On heavier textured soils however, these approaches have been much less successful and often create issues such as bringing large clods to the surface, which are then difficult to manage (Davies et al. 2019).

The Sandy Soils project (CSP00203) focuses on constraints to root growth and water uptake on sandy soils predominantly in the low rainfall zone (LRZ) but also includes some medium rainfall sites across the Southern Region. Results indicate physical compaction is a common constraint on sandy soils and average yield responses to deep ripping of about 0.5t/ha have been widely measured (refer to paper by Moodie et al. 2020 within this publication). Although these yield gains may be short lived (e.g. 2-3 years), further increases are believed to be possible via optimising crop nutrition where seasonal rainfall is favourable.

A deep ripping field day was held in March 2019 at Ouyen Victoria as part of the Sandy Soils project with a machinery and soil focus. This attracted over 200 participants indicating the large interest in deep ripping in the Southern Region. The findings from this project has led to the impression amongst some growers that deep ripping shows great promise and is certainly worth trying on other soil types; but is this so? We argue that it is wise to consider a significant body of soil research conducted over the past two to three decades. This and recent experience indicate that crop responses to deep ripping is highly contingent on several factors, principally soil type (texture) and the presence of physicochemical constraints, but also soil water and machinery type.

Table 1, which was compiled by John Kirkegaard in 2009, is based on research and expert opinions of a range of scientists and advisers working on soil constraints in the Australian grains industry at the time and summarises the likely effectiveness of deep ripping. The major conclusions arising from this summary are:

(i) the effectiveness of ripping decreases as the clay content of the soil increases,

(ii) ripping effectiveness depends on the presence of physicochemical constraints (e.g. acidity or other constraints may restrict root growth even if compaction is overcome).

(iii) in duplex type soils, depth to the clay layer is important.

The benefits of deep ripping on sandy soils appears to be a function of both the removal of tillage induced compaction as well as overcoming natural ‘cementing’ (alluviation) processes (L McDonald, pers comm.). At the other end of the soil texture spectrum, many high clay soils (e.g. black Vertosols and Kandosols) rarely respond to ripping as they are naturally ‘self-repairing’ over one or two wetting and drying cycles.

More than 85% of soils used for cropping in Victoria have sodic subsoils (Ford et al. 1993), with a naturally poor structure as a result of excess sodium, in addition to other chemically induced constraints. These soils are also prone to temporary water logging. Deep ripping of these soils often results in little yield response (or possibly a yield depression), especially if the highly sodic subsoil is lifted to the surface which subsequently reduces crop establishment. Duplex soils with a deep sandy topsoil (>30cm) can respond to ripping, but care should be taken to avoid hostile subsoils, especially is the top soil is shallow. A thorough soil sampling and analysis program to depth is recommended to diagnose these constraints before undertaking any amelioration practices.

On hostile soils, constraints other than compaction should generally be ameliorated to ensure yield benefits from ripping, and for this benefit to last more than one cropping cycle. For example, research conducted within GRDC investment project DAV00149, which focuses on soil amelioration in poorly structured clay soils in the medium and high rainfall zones of south-east Australia, found that deep ripping has consistently produced negative yield responses compared to the non-ripped control in the first one to two years following ripping. These negative yield responses are partly explained by the difficulties in establishing a uniform plant stand in poor seedbed conditions. Critically, yield responses to ripping were only achieved when a suitable ameliorant was also applied to the subsoil. For example, at Rand in southern NSW, deep ripping alone resulted in no benefit, but the application of gypsum in deep ripping slots produced a 0.55t/ha yield increase and deep ripping + organic matter + nutrients produced a yield benefit of 0.86 t/ha (Figure 1). 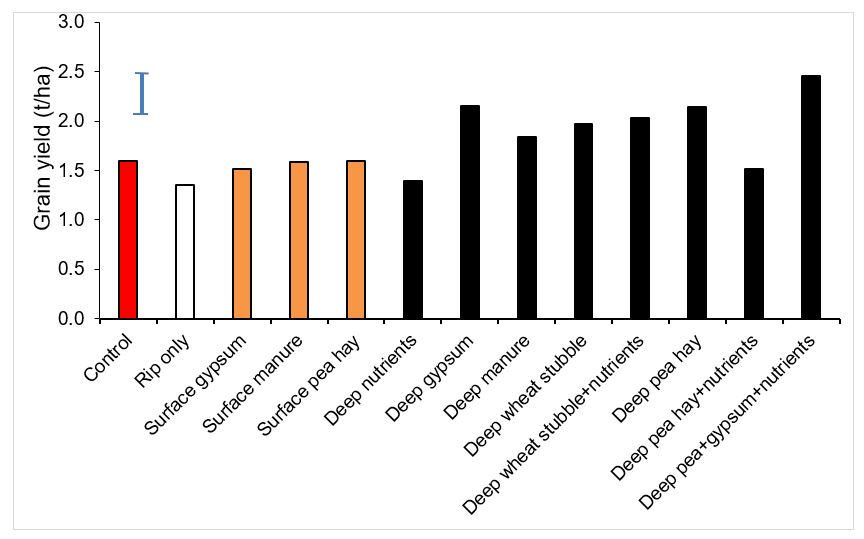 For a given soil type, the effectiveness of ripping depends on several key factors. Critically, ripping will provide little long-term benefit to subsequent crops if the soil is recompacted by machinery traffic. Ideally ripping should be used in conjunction within a controlled traffic farming (CTF) system. Not only will CTF help maintain the improvements in soil structure, but it can also provide a range of other agronomic (e.g. improved trafficability), economic (e.g. reduced fuel costs) and environmental (e.g. reduced soil erosion) benefits to the cropping system (Mitchell et al. 2019). In some cases, it may pay to delay ripping until a plan to implement CTF has been developed. Importantly, ‘prevention is better than cure’, especially in terms of avoiding compaction.

The effectiveness of the ripping operation itself is also highly influenced by soil moisture, depth and machinery (implement) design and operation. Most ripping is conducted in late summer or autumn after rain. If soil moisture is greater than the ‘plastic limit’ of the soil, mechanical disturbance, including deep ripping and machinery traffic, must be avoided. The plastic limit is the soil moisture content at which soil begins to behave as a plastic material, above which mechanical forces can smear the soil and markedly reduce its physical structure. Conversely, if the soil is too dry, machinery drafting requirements and fuel usage will be high and the soil loosening outcome will be suboptimal (Ucgul et al. 2019). It is important to know the depth of compacted layers and then to rip to just below this layer (e.g. 10cm deeper).

If compaction is the only constraint, then the use of appropriate ‘loosening shanks’ and points is important i.e. avoid shallow forward leaning, wide shanks which are designed to delve lower soil layers and bring them to the soil surface. This will help maintain the structure of the soil above the compacted layer and also minimise bringing the subsoil, potentially with its severe physicochemical constraints, to the surface. The use of shallow leading tines can reduce draft significantly depending on tine arrangement and soil type (Davies et al. 2019).

Inclusion plates fitted behind ripper tines were initially developed in WA to keep the rip line open for longer, and encourage some of the top soil to fall into the bottom of the rip before it closes. This can benefit root growth especially if a recently limed topsoil, rich in organic matter, occurs over an acid layer in the subsurface. The optimisation of the inclusion process and other tillage operations is currently being investigated in the southern region (Ucgul et al. 2019). The speed of operation is also important, particularly for the effectiveness of inclusion plates, with less back fill at faster speeds.

Beware when ripping sandy soils that these may be very soft, creating problems for sowing and crop establishment. Make sure the seeder is set up appropriately for ripped areas and depth of seeding is not excessive. Also note that ripped sandy soils are highly prone to wind erosion, especially if small amounts of crop stubble are left between the rip lines.

The time requirements and costs of deep ripping paddocks can be prohibitive, so it is important to avoid deep ripping parts of the paddock where compaction is not a problem. Soil types can vary markedly within a paddock (Figure 2), and even within paddock with a uniform soil type, the depth at which subsoil constraints can begin to limit crop performance may vary. These constraint variations are strongly linked to crop productivity and NDVI maps. Agriculture Victoria is currently examining the potential of NDVI maps and different soil sensing procedures such as EM38, Ground Penetrating Radar and Gamma Radiometric analysis to rapidly identify where soil constraints occur within a paddock at a 3D scale  and then correlating this with the production response after imposing appropriate soil management treatments (e.g. deep ripping or the application of gypsum for sodicity). 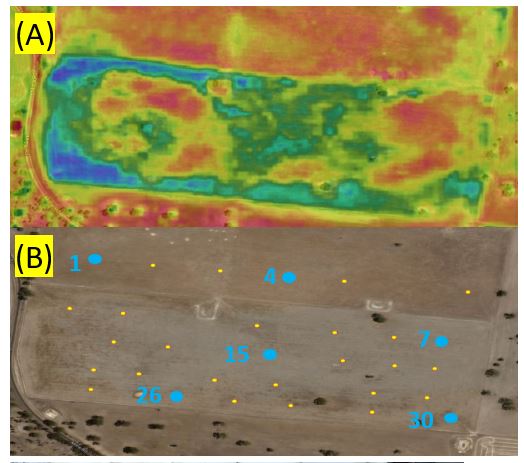 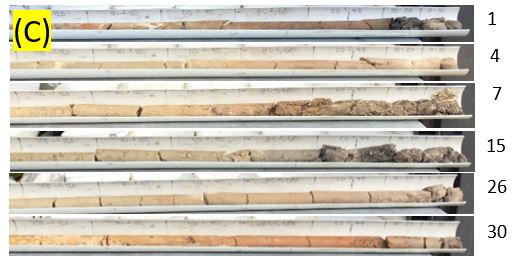 Figure 2. Variation in crop productivity across a paddock near Warracknabeal as indicated by normalised difference vegetation index (NDVI) satellite imagery (A); Soil type using colour imagery (B); and Variation in soil properties such as texture down the profile at six sampling points within this paddock (C). Potential yield benefits arising from deep ripping are strongly soil type specific and the longevity of benefits is influenced by post-ripping management. Although major yield responses to deep ripping have been recorded on sandy soils in the Southern Region, few benefits or yield depressions are likely on clay soils or shallow duplex soils with physicochemical constraints in the subsoil. A thorough soil sampling and analysis program is recommended to diagnose these constraints. If deep ripping is undertaken, a range of logistical factors need to be considered including soil moisture, depth of ripping, implement design and speed of operations to maximise yield benefits and reduce costs.

Information in the paper is derived from a range of GRDC co-investment research projects from the past 20 years including the SPI09 Initiative (2003-2007) and recent investments including DAV00149, CSP00203 and DAW00244. We are particularly indebted to colleagues including Lynne MacDonald, Michael Moodie and Steve Davies for various discussions, comments and suggestions.