Brome grass and barley grass are ranked as the fourth and ninth most detrimental weeds nationally, with an annual revenue loss of $22.5 and $1.7 million respectively (Llewellyn et al, 2016). The results of a five-year GRDC project to determine the ecology of great brome and barley grass in Western Australia and South Australia (‘Seed bank ecology of emerging weeds’ UA00156) were used to update a decision support tool; the Weed Seed Wizard (WSW). Data used in the model included plant density, seed production, competitive ability with the crop and time of seed shedding. The proportion of seed shed prior to harvest varies widely between ecotype and season for both these weed species (Borger & Hashem, 2019). The updated model was used to investigate harvest weed seed control (HWSC) as a potential management technique for great brome and barley grass. We tested the hypothesis that HWSC is a valuable weed management technique even if you can only capture a low proportion of seed at harvest.

Changes to the Weed Seed Wizard

Trials were run at Department of Primary Industries and Regional Development Wongan Hills Research Station WA (-30.8463, 116.7442) and Roseworthy Agricultural College South Australia (-34.5195, 138.6929). Trials were established as a split-plot design, with weed species including great brome and barley grass as the main-plot factor and weed density as the sub-plot factor, with four replications (Table 1). In all sites, non-selective herbicide was applied where necessary at the start of the year, but no other herbicides were applied. Hand weeding was used to clear additional weeds. In each trial, data included plant density, weed seed production and crop yield. Full details of the trials can be found in Hashem et al (2019) and in the 2019 annual report for GRDC project UA00156.

It was not the intent of the current paper to present all details and results from these six field trials, but rather to take mean data on great brome and barley grass plant density and seed production, and crop yield, to compare to predicted values from the model. The agronomic details of the field trials used to parametrise the model are listed in Table 1. A scenario for each field trial was constructed in the model. Under ‘Scenario Setup’ the ‘Scenario Timeframe’, ‘Soil Type’ and ‘Weather’ were specified (Table 1). ‘Initial Seed Bank’ values were selected to ensure that plant density in the model matched the values of actual plant density in the field, on the specified date of weed assessment in the field (Table 3 and 4). Under ‘Event Management’ a ‘Spray event’ was used to add the non-selective herbicide, a ‘Sow event’ was specified using sowing date, crop species, seeding rate in kg/ha and ‘Till type’, and a ‘Harvest event’ was specified using ‘Date’, ‘Crop’, ‘Yield based on average season’ and ‘Harvest type’ of ‘All chaff spread/normal harvest’. After selecting ‘Scenario’ and ‘Simulate’, results were examined in ‘Simulation’. ‘Export’ was selected to download results on weed density, weed seed production and crop yield. Each field trial scenario was run in the Weed Seed Wizard model using both the original species parameters for great bromeand barley grass and the altered species parameters detailed in Changes to the Weed Seed Wizard.

After modelling each field trial scenario, the values for weed seed production and crop yield measured in the field trials were compared to the predicted values from both the initial model (original parameters for barley grass and great brome) and the updated model. The mean absolute error (MAE) was used to compare observed (field trial) values with predicted means from the initial and updated model. 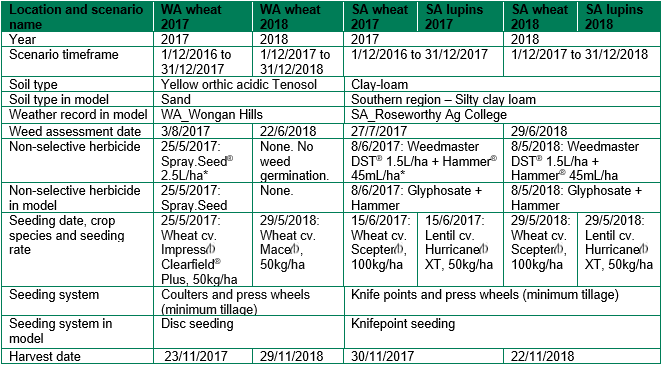 The long-term impact of HWSC (destroying 1, 20, 40, 60, 80 and 100% of great brome or barley grass seed) was modelled in the Weed Seed Wizard. The model used the altered weed species parameters detailed in Changes to the Weed Seed Wizard. A scenario was established with a ‘Scenario Timeframe’ of 11/12/2010 to 31/12/2016, and 100 seeds of either species in the ‘Initial Seed Bank’. The ‘Soil Type’ was sand and the ‘Weather’ was WA_Wongan Hills. The six-year scenario was a rotation of wheat-wheat-lentil-wheat-wheat-lentil. All agronomic events in year one to three of the rotation were repeated in year four to six (i.e. a chemical sprayed in year one was sprayed on the same day of the year in year four, detailed in Table 2). Harvest was changed from ‘All Chaff Spread/Normal Harvest’ with 1% of seeds caught in the grain to ‘Seed Destructor’, and a specified 0%, 20%, 40%, 60% and 80% of seed dropped to consider varying levels of HWSC.

Both species in the model finish dropping seeds and die prior to harvest. To explore the option of HWSC, we selected ‘Model’, ‘Edit Species’, ‘Yield’ and changed ‘DD finish dropping seeds and die’ (degree days required for the plant to finish shedding seed and die) to zero. This disables the parameter and causes all seed to be retained until a ‘Harvest Event’ in ‘Event Management’ kills all plants and drops or destroys the specified proportion of weed seed. The total number of great brome and barley grass seeds in the seed bank on 1 December in each year were recorded, to determine the value of varying levels of seed destruction at harvest. 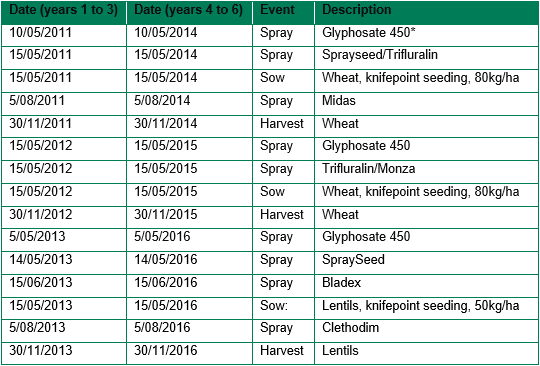 Note that the herbicides listed here do not refer to specific products; they are options selected from the list of available ‘herbicides’ in the model.

By comparison, barley grass was not highly competitive. The seed bank reached less than 1 seed/m2 by 2014 with herbicide use alone. Increasing levels of HWSC still reduced the weed seed bank faster than the scenario with 1% HWSC.

Table 5. The total number of great brome or barley grass seeds/m2 in the soil seed bank on 1 December of each year (i.e. the day after crop harvest in each year of the six year scenario), following harvest weed seed control of 1%, 20%, 40%, 60%, 80% and 100% of the seed. Note that the starting density of the weed seed bank for each species was 100 seeds/m2.

Even if most great brome seed has shed at harvest, HWSC is still worthwhile. An annual seed destruction of just 20% of great brome grass made a large difference to the long-term seed bank of this species (i.e. reducing the weed seed bank from 10954 seeds to 5925 seeds at the end of the six-year rotation). As Borger and Hashem (2019) demonstrated, great brome seed retention by the end of November ranges from 0% to 47%, but seed retention may be as high as 72% when the crop first reaches maturity. In the current simulation, a HWSC of 60% or more was necessary to drive the seed bank down over six years to lower levels than the starting seed bank of 100 seeds. However, in the field, the actual percentage of HWSC required to eradicate this weed will depend on the agronomic rotation and efficiency of the herbicides used. HWSC alone will not eradicate great brome but it is still a vital part of the IWM system.

The research undertaken as part of this project is made possible by the significant contributions of growers through both trial cooperation and GRDC investment, the authors would like to thank them for their continued support. We would also like to thank Nerys Wilkins, Peter Gray, Shari Dougall and Bruce Thorpe at the Wongan Hills Research station. Thanks are due to Alex Douglas for reviewing this paper.