Periods of extreme high-temperature, particularly short periods of heat shock are a major threat to wheat yield and grain quality throughout much of the Australian wheat belt. Current projections of Australian climate change indicate that heat waves and temperature variability will become more frequent and more intense in the coming decades (CSIRO 2011, Climate Change in Australia. http://climatechangeinaustralia.com.au). It is vital that new wheat germplasm with improved high-temperature tolerance and molecular tags linked to this tolerance are developed and introduced into commercial breeding programs.

Genomic selection is a breeding method that requires a reference population of wheat lines that are phenotyped for the trait of interest and genotyped using many DNA markers distributed across the whole genome. Statistical methods are then used to estimate the effect of each DNA marker on the phenotype; the collection of all these DNA marker effects provides a prediction of genomic breeding value. This information can then be used to predict the phenotype of new plants that have known genotypes but not phenotypes. This allows early selection of plants/lines without phenotyping which decreases the breeding cycle leading to increased genetic gain.

A highly diverse set of agronomically adapted materials were assembled for phenotyping. These included thousands of new lines developed by the University of Sydney, including crosses with synthetic wheat, emmer wheat collected in warm areas, landraces, adapted germplasm with putative tolerance identified in hot wheat growing areas globally, Australian wheat cultivars and other sources of heat tolerance developed by others.

These materials were phenotyped for various traits; including yield, using a three-tiered strategy. Firstly, thousands of lines were evaluated in the field in replicated yield plots at Narrabri in northwestern NSW at different times of sowing. Later, sown materials were exposed to greater heat stress. Subsets of materials, based on performance in the previous year and estimated genetic values, were sown at sites in Western Australia (WA) and Victoria (Vic) to assess the transferability of traits. Each year, high performing lines were retained from the previous year, intolerant materials removed, and new materials added. Materials identified as heat tolerant in the times of sowing experiments were subsequently evaluated in the field during reproductive development using heat chambers to induce heat shock to confirm heat tolerance. Finally, those lines that maintained heat tolerance in the heat chambers were screened in temperature-controlled greenhouses to assess pollen viability under heat stress. Materials surviving all three stages of testing were considered highly heat tolerant.

All materials (>2000 lines) phenotyped in times of sowing experiments were genotyped using a 90K Single Nucleotide Polymorphism (SNP) platform and these formed the reference population for genomic selection from which all DNA marker effects were estimated. A prediction equation was developed and used to calculate genomic estimated breeding values (GEBVs) on selection candidates which were genotyped but not phenotyped. A genomic selection model that incorporated environmental covariates (for example; temperature, radiation and rainfall) directly was developed. This allowed the prediction of line performance under high temperature conditions. Environmental covariates were defined for each plot and growth development phase (vegetative, flowering and grain fill). An in-field validation of GEBV selected lines was then conducted by correlating GEBVs with field trial phenotypes. Various cycles of crosses were made among diverse lines with high GEBVs and progeny subsequently selected for high GEBV. These form the basis of our new elite heat tolerant materials.

Extensive field-based phenotyping over a six-year period identified lines with superior adaptation to terminal heat stress (Figure 1). The tolerance of these materials was then confirmed in field-based heat chambers. The heat chambers were calibrated over a three-year period in replicated, triplicate plots (Table 1). Heat shock at anthesis significantly reduced yield compared to an ambient chamber and the uncovered plot. The ambient and uncovered plot were not significantly different from each other, and therefore, all future screening was conducted as paired plots (with and without heat chambers). The developed genotype-by-environment interaction genomic selection model increased genomic prediction accuracy for yield by up to 19%. 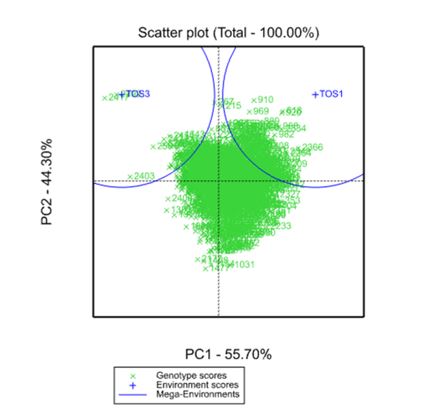 Table 1. The impact of heat chambers on yield, kernel weight, kernel number and other traits, 2013 to 2015.

n.b. Means in the same row followed by different letters are significantly different.

The most heat tolerant Australian cultivars evaluated between 2013 to 2018 were the older varieties; Sunco, Annuello, Scout, Sunstate and Lang. These cultivars showed little difference in yield between times of sowing over years (Figure 2) but tended to have relatively low yield potential. However, the higher yielding, more recent varieties; EGA Gregory, Suntop and Spitfire tended to have reduced heat tolerance. Several recently derived pre-breeding lines (PBI09C034-BC-DH38, PBI09C028-BC-DH56, PBI09C026-BC-DH5) have combined both high yield and heat tolerance.

Figure 2. Yield at Narrabri (2013 to 2018) for heat tolerant lines and Australian cultivars for two different times of sowing (TOS1 and TOS2 are optimal and late sowing, respectively).

A wider range of Australia cultivars, including many recent releases, was included in 2019 (Figure 3). Mustang, Scepter, Mace, Sunmate and Borlaug all showed relatively high levels of heat tolerance. Mustang and Scepter combined this with high yield. The pre-breeding lines PBIC15020-0C-60N-010N and PBIC15022-0C-6N-010N, developed using genomic selection, also combined high yield with heat tolerance. Unlike Mustang, these materials flowered later and did not escape the high temperatures during grain fill.

An important aspect of this work was the transferability of the Narrabri results to other regions of Australia. Subsets of 200 lines, selected for high GEBV, were evaluated at Merredin and Horsham to validate the strategy. A training population was necessary to allow genomic prediction models to calculate GEBVs without the need for phenotyping at other sites. The accuracy of genomic prediction for yield, trained at Narrabri, was evaluated in 2017 and again in 2018 (Figure 4). When the 2018 data were included in the estimations of GEBVs, the predictability exceeded 0.5 for both early and late times of sowing. 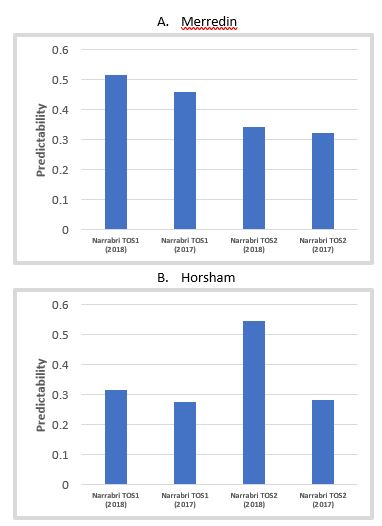 Figure 4. Accuracy of genomic prediction for yield trained at Narrabri (GEBVs calculated from five and six years of data) and validated at Merredin and Horsham in 2017 and 2018. TOS1 and TOS2 are optimal and late sowing, respectively.

Some recently released Australian cultivars have both the genetics of high yield and the genetics for heat tolerance. However, new pre-breeding materials developed using genomic selection offer commercial wheat breeders’ new sources of diversity for both yield and heat tolerance that can be used to mitigate the effects of a warming environment. The strategy of selecting for heat tolerance at Narrabri for other regions of Australia was validated by the relatively high correlations between GEBVs and yield under heat stress at Merredin and Horsham.

The authors would also like to acknowledge the funding support of Agriculture Victoria, and the in-kind contributions of Intergrain and AGT.