Yield stability across sowing dates: how to pick a winner in variable seasons?

Across the Northern grains region (NGR), wheat is sown across a window from early to late autumn (April–May). There are a range of commercial cultivars which vary in their phenology from slow developing winter types to fast developing spring types, providing growers with flexibility in their sowing window. Field experiments were sown at ten locations in the NGR to determine phenology and yield responses across different environments. The experiments were conducted from 2017 to 2019, and annual rainfall at the ten locations ranged from 184mm to 620mm. The aim of these experiments is to provide growers with regional information about variety adaptation and recommended sowing times.

Across the environments of the NGR, one of the primary drivers of yield and grain quality is flowering time. When considering variety options at sowing, growers should aim to synchronise crop development with seasonal patterns so that flowering occurs at an optimal time. This period is a trade-off between increasing drought and heat threat, and declining frost risk. Across the NGR, the optimal flowering period (OFP) varies from late July in central Queensland to mid-late October in southern NSW. There is no ‘perfect’ time to flower when there is no risk, rather there is an optimal period based on minimising risks, and maximising grain yield based on probabilities from previous seasons.

Previously, we proposed OFPs from simulations using the APSIM cropping systems for locations across the NGR, based on historical climatic records (1961–2018) according to the parameters outlined by Flohr et al. (2017) for a fast spring genotype (Harris et al. 2019). These OFPs have now been validated using recorded flowering dates and grain yield from field experiments conducted across the NGR from 2017 to 2019. It was determined that the OFP varies significantly in timing and duration, as well as for different yield levels across environments (Figure 1). As flowering time is a function of the interaction between variety, management and environment; the variety x sowing time combinations capable of achieving OFP and maximum grain yield also varied across environments of the NGR (Figure 1).

In very dry seasons, such as 2019, yields are often higher when the crops flower earlier than the OFP; while in wetter seasons, such as 2016, flowering later does not induce the same yield penalties. Despite this, our field data supports the idea that growers should target the OFP for their growing environment to achieve maximum grain yield potential. Figure 1. The optimal flowering period (OFP) for a fast spring variety (Scepter) and a slow spring variety (Lancer) determined by combining field data from experiments (2017-2019) and APSIM simulation using methods of Flohr et al. (2017) for Condobolin, Wagga Wagga and Emerald. The lines represent frost and heat limited yield (kg/ha), while the boxes on the x-axis represent the predicted OFP defined as ≥ 95% of the maximum mean yield.

Timing of flowering is influenced by phenology (genotype (G)), location and season (environment (E)) and sowing time (management (M)). Significant G × E × M interactions influencing grain yield responses across environments have been identified. The implication of these findings is that there are no commercially available varieties that are broadly adapted across a wide range of sowing times or growing environments. Differences in seasonal rainfall and temperature extremes imposed during the critical flowering period, which could have been influenced by sowing time, indicated that variety performance is also highly dependent on season. Despite this, there is evidence to suggest that variety choice can be exploited by growers to achieve OFPs and relatively stable yields across a wide sowing window. For example, in Wagga Wagga, southern NSW, winter wheat (for example; LongReach, Kittyhawk and Longsword) require earlier sowing to flower within the optimal period, due to their extended phase duration and slower development pattern. Slower developing spring types (for example; Lancer) are suited to late-April, early-May sowing dates, while mid to fast spring types (for example; Beckom, Condo) are sown mid-late May to synchronise development and target the OFP (Figure 2). 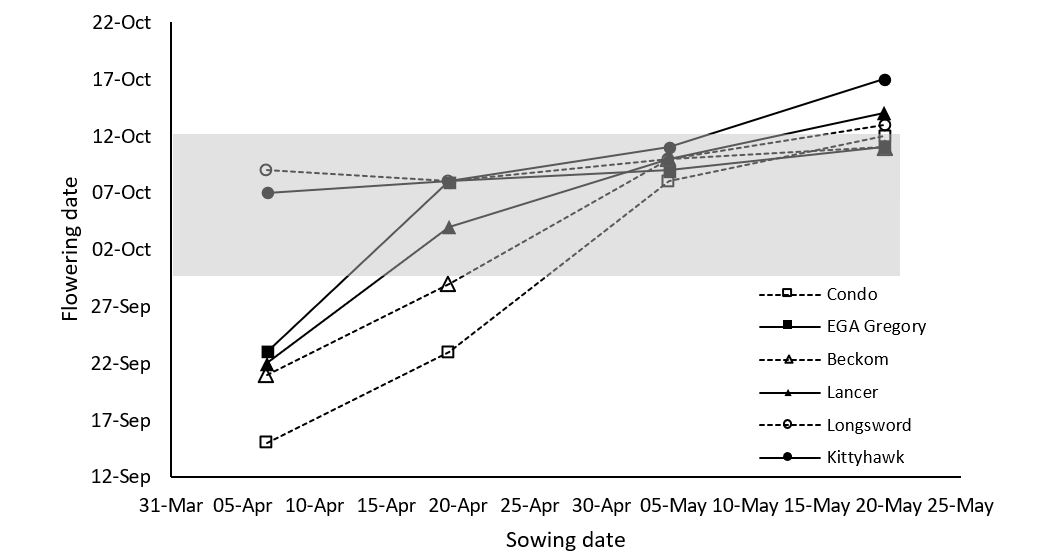 In southern NSW, when slower developing varieties (for example; winter type EGA WedgetailA) are sown early and achieve OFP, they are capable of higher water-limited yields compared with faster developing spring varieties sown later. However, faster developing varieties (for example; ScepterA) are better adapted to regions with shorter growing seasons, and in environments or later sowing scenarios where frost and heat stresses occur in close proximity to each other (Figure 3). Relevant sowing date and variety recommendations will be presented regionally at GRDC Grains Research Updates in February and March. 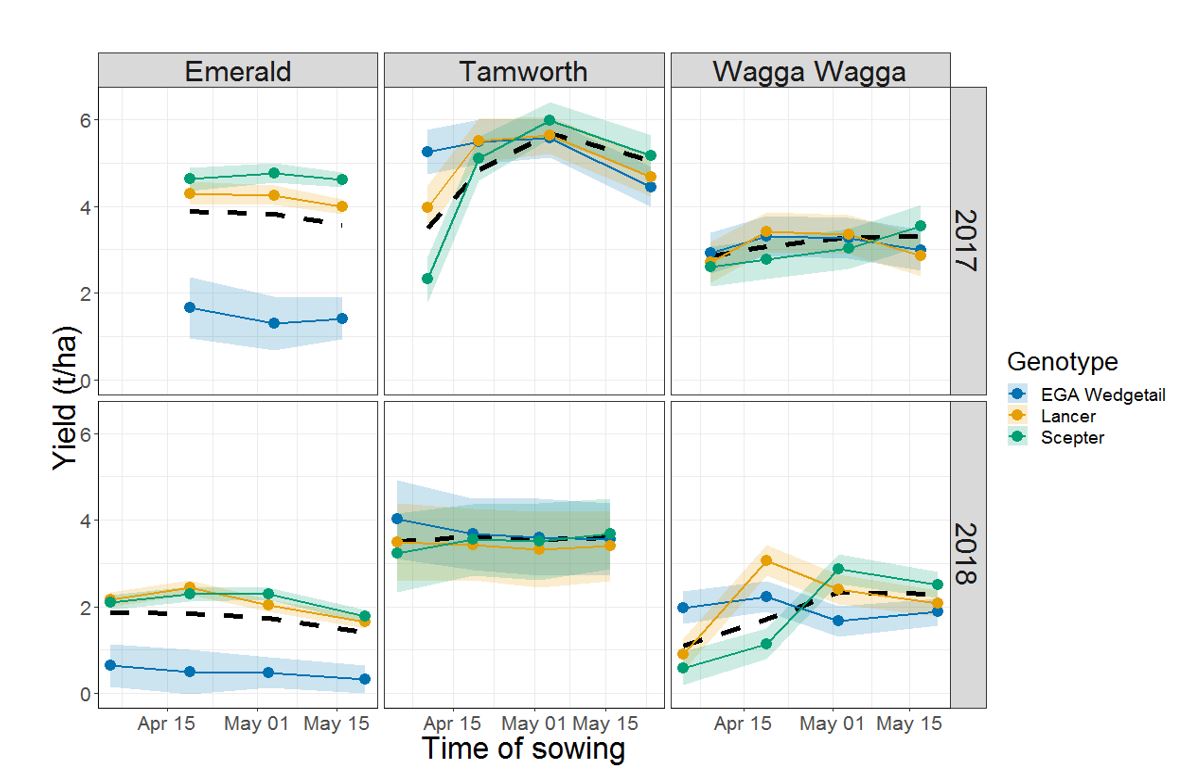 Likelihood and timing of sowing opportunities varies across growing environments

Matching flowering date to a growing environment can be a challenge, as the timing of the seasonal break is highly variable. A simulation was conducted to determine the probability of a sowing opportunity occurring across locations of the NGR using methods described in Unkovich (2010). According to this sowing rule, the timing of a sowing opportunity whereby there is sufficient seedbed moisture to establish a wheat crop, differs across environments. Therefore, sowing opportunities will influence variety choice and sowing time decisions also. For example, the probability of a sowing opportunity prior to 25 April was 38% at Condobolin, compared to 65% of years at Yarrawonga (Figure 4). As such, there are limited opportunities to sow a winter wheat at Condobolin, however probability increases to approximately 70% by early-May and the opportunities increase for mid-fast developing varieties. In contrast, growers in Yarrawonga have more flexibility in their sowing window and could consider incorporating slower developing or winter types for earlier sowing in their program. 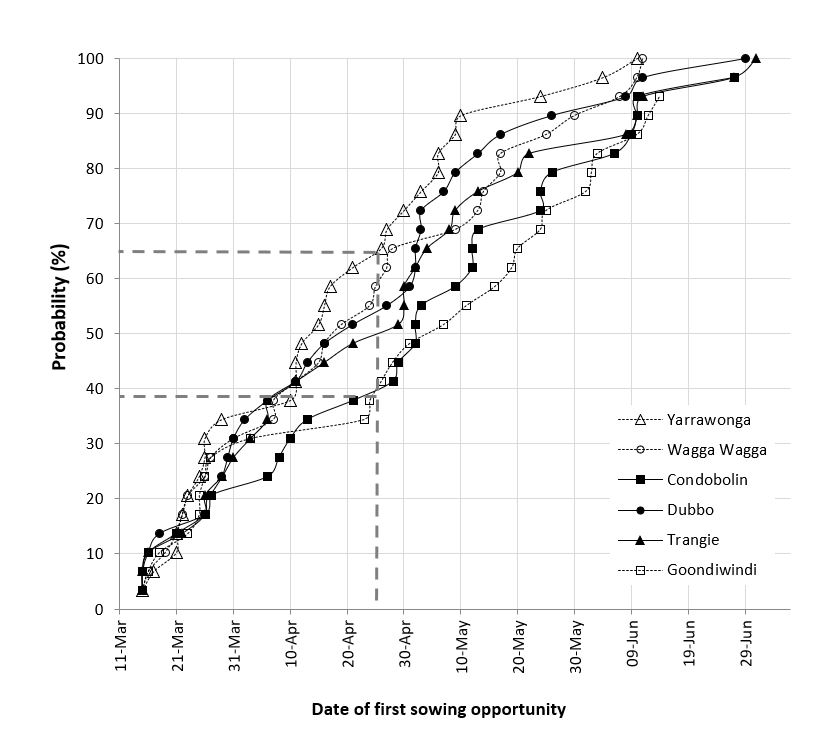 Figure 4. Probability distribution of first sowing opportunity for sites across the Northern grains region from 2000-2018 using the methods of Unkovich (2010). The dashed grey line pinpoints the probability of the sowing opportunity prior to 25 April for Condobolin and Yarrawonga.

There were significant interactions between G × E × M, whereby genotypic responses to sowing date varied across sites in the NGR, and within seasons for varieties with varied phenology patterns. These findings indicate that the varieties tested are not broadly adapted to environment or management, and as such there is scope for growers to optimise grain yield through variety selection and management of sowing date by considering phenology responses and target OFPs.

This research was a co-investment by GRDC and NSW DPI under the Grains Agronomy and Pathology Partnership (GAPP) project in collaboration with Department of Agriculture and Fisheries, Queensland. The research presented in this paper was made possible by the significant contributions of growers through both trial cooperation and the support of the GRDC, the author would like to thank them for their continued support.