From the favourable genetic markers identified in the new germplasm, only a proportion was present in a database of 502 Australian varieties, suggesting that there is room for improving lodging tolerance in high yielding wheats.

Lodging due to the permanent displacement of shoots from their upright position, is a common phenomenon in high yielding wheat crops. Lodging counteracts yield gains achieved by breeding and reduces the effectiveness of investment in inputs such as fertilisation and irrigation by reducing yield and quality. Yield is further reduced because fallen plants cannot intercept radiation fully to produce biomass. Direct losses can also occur due to shattering or at harvest, as low-lying spikes are not picked up by the header. The humid environment in a lodged crop can also affect bread-making quality due to higher incidence of pre-harvest sprouting and mycotoxin contamination (fungal infection) if ripening coincides with rainy, humid conditions. Finally, slow harvesting and the need for grain drying also represent additional costs for growers.

Lodging is a complex phenomenon, that depends not only on plant attributes but also soil type, how wet the soil is, wind and crop husbandry. Some of the popular management options, such as delaying N application, managing planting density and the use of plant growth regulators to lower plant height, have variable rates of success and substantial genotype x environment x management interaction (Peake et al., 2016).

Studying the impact of different management practices on lodging, researchers in the UK concluded that the best practice associated with high yields could not avert the damage of moderate to high wind speeds during grain filling, and new wheat genotypes were needed with increased lodging tolerance (Berry et al., 2000).

Two types of lodging have been documented, root or stem lodging. Hence any search for reliable plant traits has to phenotype attributes of the root plate (also known as crown root), the stem and the whole plant, such as height.

The north-eastern part of the Australian cropping belt, ranges from a subtropical climate with summer-dominant rainfall in the north towards a more uniform rainfall distribution in the temperate south. Typically, soils in this area have high clay content and high water-holding capacity. In this region, growers may have access to tactical irrigation around flowering to enhance grain yield. In good seasons or with supplementary water, if crops such as cotton precede wheat in the rotation, a high level of residual nitrogen in the soil is expected, adding to the environmental factors increasing lodging likelihood in crops expected to be high yielding. Occurrence of substantial yield losses due to lodging have been documented in this region for bread wheat and other crops. Hence the need to find better genetic backgrounds for the varieties available for growers.

The overall aim of this project was to provide Australian breeding companies with access to regionally adapted germplasm with stable yields higher than 7 t/ha, with low lodging and deliver information on how to select for low lodging, high yielding wheats, in the form of knowledge about the key traits, phenotypic selection tools and DNA markers.

The first step was to assemble a highly diverse set of materials, such as local varieties, advanced breeding lines and imported germplasm and identify those that consistently delivered low lodging and high yield across the northern region. Nineteen multi-environment experiments were run over four years in Emerald and Gatton (QLD), Narrabri and Spring Ridge (NSW). The experiments were fertilised with high N doses before sowing (300-350 kgN/ha) and tactical irrigation was used after flowering to induce lodging. Each plot was assessed for yield, height, flowering and percentage of the crop lodged at which angle, border rows were excluded. With the combination of angle and percentage lodged, we built a ‘lodging score’. A lodging score of 0=not lodged and 100=completely lodged (flat on the ground). The benchmark lodging score for the project was 80% of the crop leaning 20° from the vertical and the rest standing, equivalent to ‘17.8’ in terms of lodging score.

A selection of 50 lines was further characterised in detailed phenotyping field experiments for 20-plus traits, mainly attributes related to either root or stem lodging, i.e. root plate spread (RPS), and structural rooting depth, stem strength, diameter and thickness, and components of shoot leverage, such as plant height and height at the centre of gravity.

From the phenotypic characterisation, four donors were selected and were crossed to three recurrent parents chosen by the Australian Plant Breeders Reference Committee – these being EGA Gregory , Suntop and LRPB Spitfire . Flowering, height and lodging were scored for two consecutive years in the twelve populations; yield data are available for one year only. 288 EGA Gregory derived and 63 Suntop derived lines were genotyped using a 90K Single Nucleotide Polymorphism (SNP) platform. This genetic information was associated with lodging scores from the field to detect relevant DNA markers.

Extensive field phenotyping using high N fertility and tactical irrigation led to a range of yield and lodging outcomes in multi-environment experiments (Table 1) and highly reproducible rankings for lodging (Figure 1). This means breeders can treat the region as a single target.

Table 1. Mean and range of yield and lodging observed in multi-environment experiments A selection of fifty lines underwent a detailed field phenotypic characterisation over two years. Field grown plants were ‘pulled-up’, root plates washed and measured as shown in Figure 2. Root plate spread emerged consistently as a trait able to discriminate low lodging, high yielding germplasm in a classification analysis with a regression tree (Figure 3). If the root plate spread was greater than or equal to 5.5 cm, the lodging scores were small, and yield was high. Stem breaking strength (far right in Figure 2) emerged as an important trait for genotypes with narrower root plates (less than 5.5 cm). Figure 3 shows the regression tree illustrating how trait levels separate groups or nodes of data. 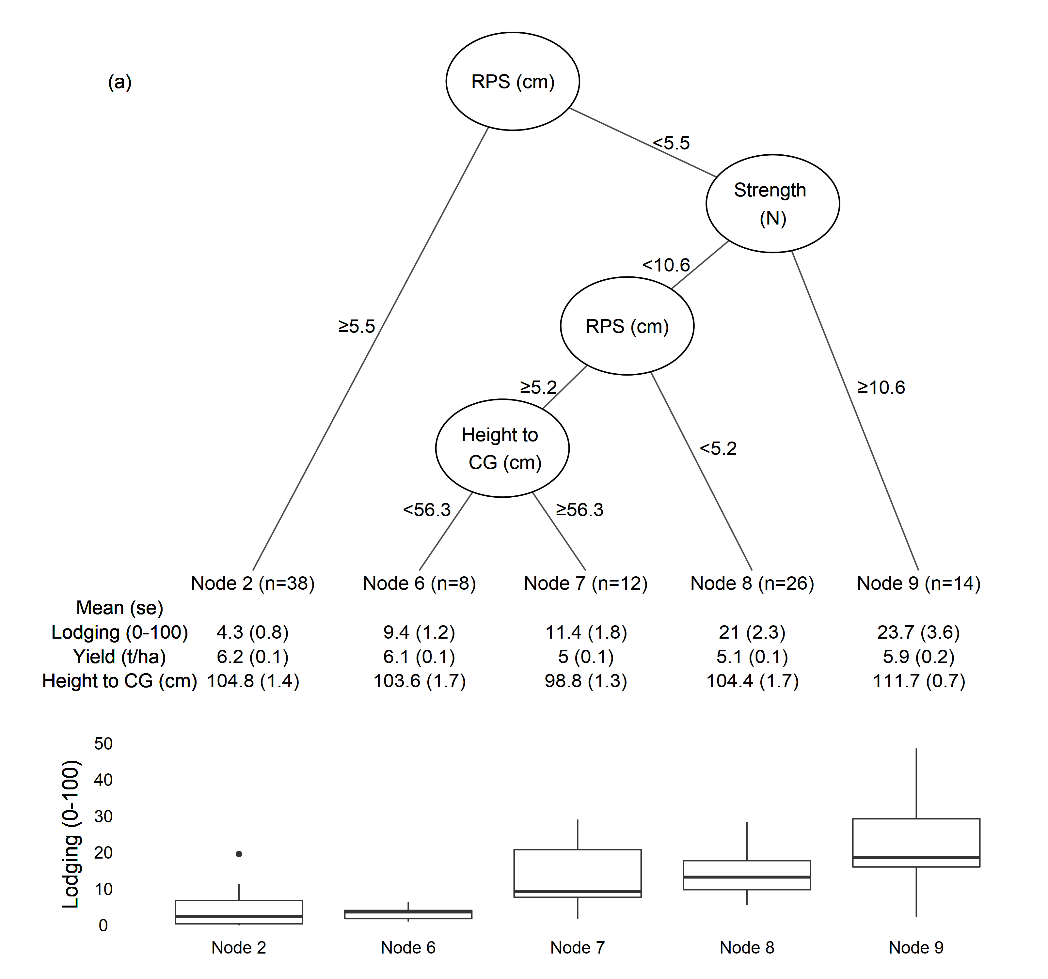 From this phenotypic characterisation, four donors were selected, one an Australian cultivar (LRPB Cobra), the other three exotic lines from CIMMYT (RTHiY40, RTHi32, RTHiY57). Donors were low lodging, high yielding, contrasting in height and generally showing wider root plate spread (belonging to Node 2 in Figure 3) than the Australian cultivars parents of the new populations. It is possible that the importance of anchorage characteristics for our conditions is related to the high clay content of the soils in the northern region, typically above 35% clay from the surface (CSIRO Soil and Landscape Grid of Australia) that, when wet, create a very unstable environment for crops to anchor.

Lodging was first evaluated for the new populations in single rows, bordered by the same cultivar to avoid bias. EGA Gregory derived lines lodged in a higher proportion and with a higher deviation from the vertical. More than 50% of the EGA Gregory derived lines lodged less than EGA Gregory , with the tallest donor, RTHiY40 (ca. 107 cm), producing lines as effective as those derived from the shortest donor, LRPB Cobra (80 cm), in both years. In our experiments, lodging and height were not associated.

Yield was measured in 2018 only in the lodging nursery after heavy rain and ranged from 570 g/m2 (5700 kg/ha) to 761 g/m2. Among the EGA Gregory populations, 100 lines had a lodging score significantly below the 17.8 benchmark in that year, 12 of which yielded as much as or more than EGA Gregory. When LRPB Spitfire was the recurrent parent, the lines derived from crosses to LRPB Cobra and RTHiY57 were best at reducing lodging.

DNA markers for lodging were detected both in a biparental population from CIMMYT (Seri x Babax) and the lines from the new populations that were genotyped. These genetic markers do not coincide with known flowering or height genes. Interestingly, the DNA markers that come up in a year of low lodging are dissimilar to those observed in a high lodging year, suggesting that the plant attributes that are important vary with the level of lodging. In 2017, a high lodging year, 4 significant DNA markers were detected for lodging scores. If present in their favourable form, they can reduce the lodging score by approx. 8 points each.

A search for the favourable DNA markers found in the new populations in 502 Australian varieties with known genetic profiles, indicated that no single Australian variety has all the favourable genetic markers. Lodging predictions were generated for the 502 varieties based on the DNA markers detected based on their genetic profile in a high and low lodging year. Amery and Stockade were the only two varieties consistently among the top 25 with lowest predicted lodging score (Figure 4). Further analyses will be carried out in this area to pass the information of the best candidate markers to breeders.

Figure 4. Varieties which have a mean rank of predicted lodging score which falls in the top 25 or the bottom 25 in at least two analyses

This project succeeded at finding genetic diversity for lodging in high yielding wheats and transferring it to new germplasm with known varieties as background. Many of these lines lodge less than their parents and some yield more. The process of selection and investigation of relevant plant attributes succeeded at detecting the traits that were more important to choose donors for our target region, firstly root anchorage, then stem strength.

The findings of this project may not only be beneficial for the northern region but could spill over to wheat varieties designed for the high rainfall zone in the South and high yielding environments of Tasmania or Northern Australia. In addition, the general approach to selection and characterisation of plant attributes is a framework that could be extended to other crops.

Furthermore, as not all favourable genetic markers found in the new populations were present in Australian varieties, there is room to improve lodging tolerance in Australian breeding.

The research undertaken as part of this project was made possible by the significant contributions of growers through both trial cooperation and the support of the GRDC and the cooperation of Australian Plant Breeders. The authors would like to thank them for their continued support.