The area of the Northern grain cropping region from Central Queensland to Dubbo in New South Wales (north to south) has a diverse cropping system, often with both winter and summer cropping, or summer fallow for moisture storage. Effective weed control in crop and fallow is heavily reliant on herbicides such as glyphosate. For the past 30 years, heavy reliance on glyphosate has seen more and more weed species become resistant to this herbicide. This includes annual ryegrass, awnless barnyard grass, liverseed grass, windmill grass, fleabane and sowthistle (Cook 2014,  Widderick et al. , 2014, Cook et al. 2004).

Despite the increasing number of herbicide resistance cases, the full extent of herbicide resistance in this part of the Northern region is unknown. The first whole of region survey of key winter and summer weed species started in winter 2016 and was completed in summer 2017/2018. Weed seeds collected from the survey were screened for resistance against various herbicides. This report primarily covers the herbicide resistance screening carried out by the Department of Agriculture and Fisheries, Queensland.

The Department of Agriculture and Fisheries, Queensland (DAF) was responsible for herbicide resistance screening of sowthistle, fleabane, barnyard grass, feathertop Rhodes grass, windmill grass and liverseed grass. Populations of the species listed above that were collected in New South Wales by Dr John Broster of Charles Sturt University were also screened by DAF.

Sowthistle and summer grass seeds were germinated on 0.6% agar for 4 to 7 days in the glasshouse and transplanted into trays (50 seedlings/population/tray) of potting mix. The trays were then placed onto drip trays filled with enough water to keep the soil moist without causing any water logging for the first few days. After 7 days, the plants were watered from above. A similar approach was used for fleabane, with the exception that fleabane seeds were sown directly into trays of potting mix. After 7 days, fleabane seedlings were thinned to the required density (10 seedlings per column, up to 5 columns).

Plants were grown until they reached the three to five leaf growth stage. They were then treated at the recommended label rate for each herbicide (Table 1) with the appropriate adjuvant (if required). For weeds that are not on label for a particular herbicide, the recommended rate for the closest relative weed was used. Assessment of survivors was carried out at 21 days after treatment (DAT). Plants were considered surviving if there were actively growing tillers (grass weeds) or regrowth from the growing point (broadleaf weeds).

†Not registered for control of this weed species
*Glyphosate used as stand-alone and not in tank-mix with 2,4-D amine as per label requirement.
** Used alone as post-emergence . Note that imazapic is only registered for stand-alone use against these weeds as a pre-emergent application.
***As per APVMA permit PER89322 (but without the double knock) 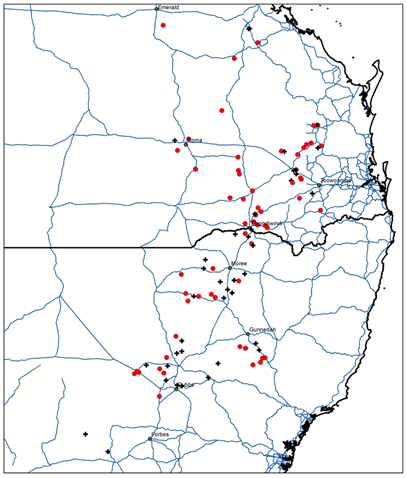 Screening of 62 viable populations revealed 68% survived the glyphosate target rate (noting that glyphosate is not registered for FTR control) (Figure 3, Table 3). One population survived treatment with haloxyfop, while all populations were controlled with clethodim and paraquat. 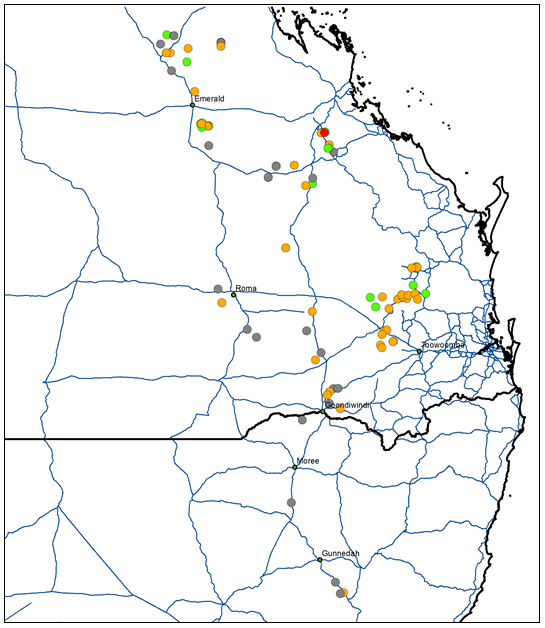 Screening of 42 viable populations revealed 36% were resistant to glyphosate (Figure 4, Table 4), while all of the populations were susceptible to propaquizafop, clethodim and imazapic (noting imazapic was applied as a foliar application and not a soil residual treatment). * Imazapic was applied as a foliar application, and not a soil residual treatment

Screening of 12 viable populations revealed that more than half of them (58%) survived the target glyphosate rate (Table 4). All of the populations were controlled by clethodim.

There were only 14 liverseed grass populations collected across the Northern region. Almost none of them were viable. Herbicide resistance screening of the viable populations (3) showed no evolved resistance to any of the herbicides tested (Table 4).

For years, there have been anecdotal reports of certain weed species becoming more difficult to control. This project provides, for the first time, proof of widespread occurrence of herbicide resistance in key weed species in the Northern region.

Glyphosate resistance is the most pressing issue, as all of the weed species tested have populations that were able to survive robust glyphosate application rates, except for liverseed grass (noting only three liverseed grass populations were tested). Especially worrying is fleabane, where total glyphosate failure was recorded. Frequency of glyphosate survival for the other weed species ranges from low (14%, sowthistle) to moderate/severe (68%, feathertop Rhodes grass).

Despite the number of weed species and populations that have evolved glyphosate resistance, it should be noted that other herbicides tested were still effective. 2,4-D amine controlled all of the fleabane and sowthistle populations tested, including the ones that survived glyphosate.

Group A herbicides such as haloxyfop, propaquizafop and clethodim gave good control of the summer grass weeds, with only one feathertop Rhodes grass sample surviving haloxyfop treatment.

Imazapic, a group B herbicide that was used post-emergence in our screening, provided good control of awnless barnyard grass and liverseed grass populations. It should be noted imazapic is only registered for pre-emergent control of both awnless barnyard grass and liverseed grass. For post-emergent application  the label requires it to be tank-mixed with paraquat. As such, these results should be interpreted with caution.

Viability of the weed seeds was one of the issues in our herbicide resistance screening. All of the weed species tested had populations with non-viable seeds, ranging from 10% (sowthistle, glyphosate and 2, 4-D amine) and up to nearly 80% of populations (liverseed grass). Some of these non-viable seeds were immature, and we believe some of the weed seeds were exposed to herbicide treatment shortly before collection, which could contribute to non-viability of seeds.

The presence of evolved herbicide resistant weeds in the Northern region is expected, given the reports of resistant weeds in the past. However, the extent of the some of the resistance, e.g. fleabane to glyphosate, is truly worrying. This survey offers, for the first time, an overview of the widespread nature of herbicide resistant weeds in the Northern region in key weed species. Continued heavy reliance on herbicides for weed control is likely to exacerbate the resistance challenge for growers and agronomists. Other weed management tactics that incorporate non-chemical weed control such as crop competition, targeted tillage, and harvest weed seed control (Widderick, Ruttledge, McKiernan, personal communication) should be seriously considered to ensure the herbicides that we have now continue to be effective in the future.

The research undertaken as part of this project is made possible by the significant contributions of growers through both trial cooperation and the support of the GRDC, DAF and Charles Sturt University. The authors would like to thank them for their continued support.