Although the business of grain-farming will largely stay the same towards 2030, some things are changing to challenge grain-farming and deliver further market opportunities. The sources of change and challenge include:

(i) Technological change
The ability in real-time to affordably track grain quality at harvest will improve, enabling farmers to more cost-effectively segregate grain at harvest and better match end-user preferences. Improved logistics and multi-mode hubs will facilitate greater use of containerisation. Lower cost grain storage combined with low interest rate will allow more grain to be stored, and stored for longer.

(ii) New crops and changing crop mixes
The wheat-sheep belt, the mainstay of Australian agriculture, will more flexibly switch its land use to favour greater crop diversity. Canola, chickpeas, lentils and lupins, once little known crops, will remain as important crop options in different regions. The swing into reliance on crop revenues is evidenced by Australia’s sheep population now being as small as it was almost 120 years ago and in the early 1900s Australia only produced 1.5mmt of wheat from 2.5mha whereas this year Australia is on track to produce over 27mmt of wheat from 13mha. Moreover, 17.8mmt of other grains is also likely to be produced this year.

(iv) A changing climate
Grain production in Australia is based on rain-fed farming systems. Hence, temporal and spatial changes in rainfall and temperatures are crucially affecting national crop production. Extreme heat during grain filling is an increasing problem in some regions with farmers observing occasional ‘heat frosts’ that worsen grain yield and quality.

(v) An altered role of government
Traditionally, government played a major role in Australia’s grain industry. Rail systems were owned and operated by State governments. Statutory grain marketing was ubiquitous. Research and advisory services were funded and supplied principally by State governments, with the Commonwealth government playing an important collaborative role in research funding. Provision of new plant varieties was almost solely the province of State government agencies, universities and the CSIRO. Governments were important employers in many rural towns. Yet now, the march of privatisation, the lesser relative economic contribution of agriculture and the emergence of other claims on the public purse (natural disaster relief, COVID relief, health and social welfare) have altered the role of government in the farm sector. Increasingly grain farmers pay fully or in large part for advice, grain marketing, research services and grain transport.

Privatisation has not only affected government services. Even farmers’ ownership of the key services of grain handling and storage has passed into private ownership (GrainCorp, Viterra).

(vi) Maturing low-cost overseas competitors
Over the last few decades, a seismic shift in grain export prowess and rankings has occurred. In previous decades North America, Europe and Australia were main grain exporters. However, first South America (i.e. Brazil and Argentina) and then the Black Sea region (Russia, Ukraine and Kazakhstan) have greatly increased their grain production and grain exports. Russia has replaced the USA as the world’s main exporter of wheat. Argentina and Brazil are main export suppliers of feed grains (soybean and corn).

(viii) An increasing emphasis on the sustainability credentials of grain production
The costliness of grain and its quality matter to most consumers, especially overseas customers. Yet within agriculture and the urban consumers and voters that influence Australian agriculture, the sustainability credentials of farm production also increasingly matter. For example, major agricultural organisations like the MLA and NFF have signalled the need for Australian agricultural industries to plan to be carbon-neutral.

All these changes, in combination, are affecting the current and future potential of grain production in Australia.

(i) Feed grain demand will increase by around 2.3 mmt

(ii) An additional 0.6 mmt of grain will be required for flour and malt production

(iii) An additional 5.6 mmt of grain will likely be produced

(iv) The additional surplus of grain available for export could be around 2.7 mmt

(vi) The main sources of additional exportable surpluses of grain will be WA and SA; and bumper years in eastern Australia

A key implication of above projections is that towards 2030, with grain production being climate-constrained, Australia’s domestic requirements for grain will become increasingly important in eastern Australia where most of the population increase and greater demand for feed grains, flour, oil for human consumption and malt will occur. By contrast, most of the exportable surpluses of grain will increasingly come from the less populous states of WA and SA.

The task of finding export markets for the additional ~2.7 mmt of export grain available by 2030 may not be overly challenging, given the projected increase in grain imports envisaged for many of Australia’s current overseas grain customers. Nonetheless, it needs to be noted that this task of selling more Australian grain will occur against the backdrop of burgeoning exports from low-cost international competitors who may not have the same commitment to carbon-neutrality.

Assuming crop production in Australia towards 2030 remains seasonally volatile (whilst the stable east coast domestic demand for grain increases in relative importance), then grain farmers and grain users in eastern Australia are likely to react by:

(i) Investing in more grain storage; especially whilst interest rates are low, making the cost of carrying grain affordable

Although the increased demand for feed grains in eastern Australia may encourage its grain producers to alter their crop mix towards more feed grain production, it is unlikely that most farmers will additionally allocate more land to cropping rather than sheep production. Despite the sizeable reduction in the national sheep population since the early 1990s, most NSW and Vic farmers have maintained their investment in sheep since the early 2010s (Figure 1), despite the period of serious drought in 2018 and 2019. Figure 1. Sheep population in Australia, NSW and Vic since 1990

In order to retain sheep numbers, either pasture areas need to be allocated for sheep production or affordable feed grains always need to be readily available. Given the strong upward movement in sheep meat and wool prices up until the impact of COVID-19, on a gross margins basis, farmers have been less likely to switch land and other resources away from sheep production. Moreover, as the domestic and overseas demand for sheep meat continues to increase, then retention of sheep in farming systems is increasingly likely. In addition, retaining sheep provides a means to add value to feed or downgraded grain produced on a farm. Currently, sheep enterprises form a profitable, risk-diversifying role for many farm businesses. As a result, crop production growth over the next decade is more likely to be based largely on yield increases rather than crop area increases. Accordingly, crop breeding and crop agronomy will play crucial roles in ensuring gains in crop production in NSW and Vic.

In coming decades, the traditional flow of grain from Vic and NSW farms down to ports for overseas export could be a less dominant feature of their crop production, as east coast demand for grain increases in relative importance; and especially in years of low production in eastern Australia. Interstate grain flows from SA or WA (see (Figure 2) could feature when prolonged drought in NSW and Vic leads to depletion of their grain storages such as occurred in 2018/19 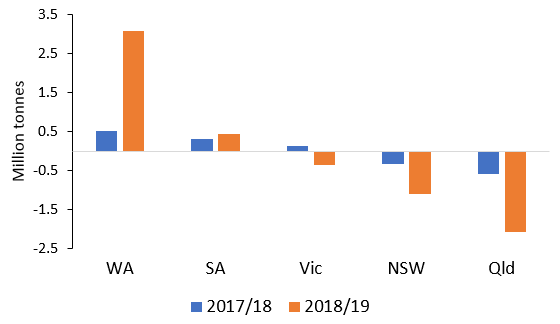 In 2018/19 some regions in SA were also affected by drought. The SA grain harvest was only around 5.6 mmt, of which the main grain handler and exporter, Glencore, only exported around 2.6 mmt, indicating that around 3 mmt was either stored, used locally or exported to eastern Australia. Hence, due to SA’s small domestic market, even in low production years, SA is able to capitalise on favourable market opportunities in eastern Australia.

In years when SA or WA escape drought, yet eastern states are drought-affected, then sizeable interstate grain flows from these states are likely (see Figure 2). Freight differentials in coming decades could be further affected by construction of the inland rail in eastern Australia, due for completion in 2025. If the inland rail is sufficiently cost-effective, then interstate grain flows from SA could be much enhanced in some years. In addition, construction of additional grain port infrastructure in SA will facilitate coastal trade. In eastern Australia, south to north flows of grain by rail, road and ship are likely to become increasingly important towards 2030 as a product of climate volatility and continuing growth in the demand for grain in eastern Australia.

The constant challenge of a warming, drying climate is likely to limit winter crop yield growth in all winter crop regions of Australia and will increase the dependence of extensive livestock production (sheep, cattle, dairy) on supplementary grain feeding. Simultaneously, further population growth, especially in Qld, NSW and Vic, will increase the national market demand for grains, especially feed grains. The corollary is that growth in grain production in Australia is likely to be modest and the tendency will be for a growing proportion of grain to flow to domestic markets, especially in eastern Australia. Exports of grain from NSW and Vic are likely to be constrained by the growth in the Australian domestic market in eastern Australia and the constraints of climate trends on crop yields. In a low interest rate environment, storage of grain becomes more affordable as a strategy to lessen price volatility and improve the affordability of grains. Hence, grain storage is likely to become part of major grain users’ and producers’ risk management strategies.

In coming decades, export grain supply chains in Vic and NSW will be affected by the combination of limited growth in crop production and an increased role of grain storage to improve the reliability of supply to domestic markets. Low interest rates make affordable the cost of carrying grain across seasons. In eastern Australia easily stored feed grains like lupins and barley, if high-yielding varieties become available, could feature more in farmers’ crop portfolios. Farmers are likely to enlarge their focus on feed grain production and any feed grain value-adding opportunities.

Farmers are likely to have increasing choices over where and when they sell grain, due to the lower cost of storing grain (i.e. a low interest rate environment), and the emergence of a range of domestic market opportunities.

Modest growth in Australian grain production is expected towards 2030. By contrast, Australia’s population is projected to increase by around 16 per cent by 2030. This means about 4.1 million additional people, mostly residing in eastern Australia. Despite this projected increase in population and the associated demand for feed and human consumption grains, little increase in the area sown to crops in Australia is envisaged.

How grain is produced (i.e. its sustainability credentials) will be increasingly important, especially to domestic users and consumers.