Northern Grower Alliance have been researching two important aspects of chickpea harvest management during the period 2017-2019.

The first has been to evaluate the impact of desiccant choice and timing on yield and grain quality. The second has focussed on the magnitude of header losses and the impact on yield and economics from changes in harvest approach.

The area of focus has evolved over the three seasons:

2018 - 4 trials continuing the original activity. An additional 3 trials focussed on impact of desiccation timing (application ~3, 2 and 1 week prior to ‘planned’ commercial harvest). In all three timing trials, treatments were also harvested after a 14-day delay. Treatments repeated from 2017.

2019 - 3 trials primarily focussed on the impact of desiccation timing (application at ~70%, 80% and 90% pods at physiological maturity). Harvest was conducted for all timings ~7 days after application. Similar treatments to 2017 and 2018 but replaced Reglone with glyphosate + Ally + Sharpen.

Pod maturity was assessed at each application on a minimum of 10 main branches. Pods were considered mature when a ‘yellow beak’ was starting to extend on the enclosed grains. This stage often corresponded with a purplish tinge appearing on the pod coat.

NB The use of desiccants is not recommended when the grain is to be used for seed.

Differences between desiccant treatments and timing of application were less obvious than originally expected.

However, in 5 of the 6 trials where harvest timing was also compared, it was clear that the earlier harvest of chickpeas had significantly lower levels of damaged grain. This effect was irrespective of whether the plots had been desiccated or untreated. Although differences in header setup can’t be eliminated, it is likely that the lower levels of damaged or split grain is at least partly due to the higher levels of grain moisture at harvest. NB even the early application treatments had grain moisture lower than 10%, when tested within 24 hours of harvest, in 5 of the 6 trials.

Rather than suggesting that the industry desiccate chickpeas at an earlier maturity stage, this data should provide good confidence that desiccation at 85-90% pod maturity is highly unlikely to have any negative impact on yield or grain quality. When combined with harvest scheduled ~7 days after application, this should allow harvest at slightly higher grain moisture and significantly reduce the amount of damaged or split grain in samples.

Commercial observations have frequently indicated high levels of harvest grain and pod loss in chickpeas, particularly in crops with reduced biomass that ‘feed’ poorly into the header. This grain loss is different to grain that passes through the header (processing loss) or grain left on plants (harvest height loss). Front of header grain loss is made up of pods and grain that are knocked off by the reel, cut off by the knife but fall outside the header front or thrown out from the header by the drum or belt.

In 2018, data was generated at a site near Gurley where PBA Seamer was harvested with a header fitted with an air front. Replicated strips were established where the only difference was whether the air front was turned on or off during harvest.

Counts were taken of pods or grain on the ground together with the number of grains/pod and grain weight. In 2018, sampling zones were assessed across the harvested width with no pods or grain apparent on the ground prior to harvest. Results in Table 1 are for the pod and grain losses away from the header trail. These are the harvest losses that occurred at the front of the header but exclude any pods that were unharvested but still attached to plants. 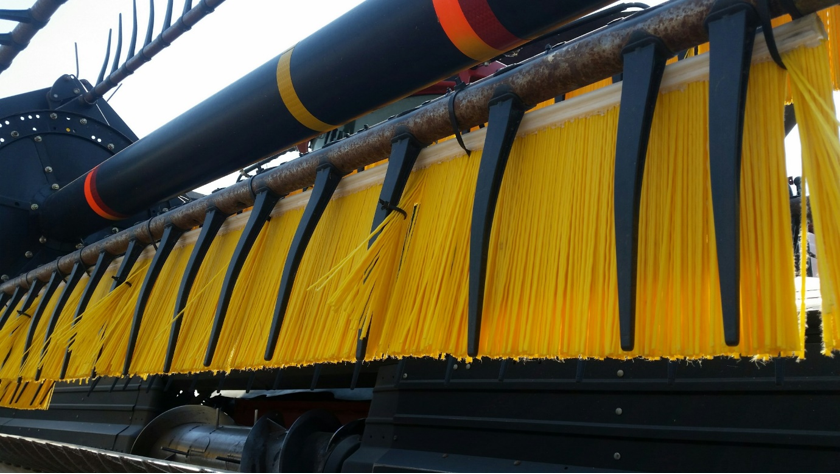 In 2019 three sites were evaluated with sampling away from the header trail to identify the pods or grain losses at the front of the header. Again there was no indication of pod or grain loss prior to harvest. Two of the sites had air assist fitted to the header that could be simply turned on or off. The third site evaluated lengths of brushes attached to the reel (Figure 1).

Letters of significance show significant differences within each site (2 sample T test, p=0.05)
Economic impact calculated on a $750/t grain price
All results in Table 1 are for sampling away from the header trail. This shows the yield losses occurring at the header front. Assessment of grains/pod and grain weight was conducted to calculate total grain loss.

All four trials highlighted the amount of chickpea grain and income that can be lost at the front of the header at harvest. The impact of air assist or even the simple approach of attaching brushes to the reel provided benefits of ~$50/ha. However some caution is needed as both 2018 and 2019 were low yielding seasons with yields varying between 0.4 and 1.0 t/ha. The benefits of simple header adaptations may be more substantial in lower yielding years or where crop biomass or planting configuration is likely to result in poor levels of ‘feeding in’ of harvested material.

Further evaluation is warranted under more normal conditions to provide growers with realistic indications of the benefits of changes in chickpea harvest management.