Aphids are major crop pests throughout the world, attacking a broad range of crops through direct feeding, and as a vector of viral diseases. In Australia, the cost of aphid injury has been estimated at $200-$400 million per year. The green peach aphid (Myzus persicae, GPA) has evolved resistance to a wide range of commonly used insecticides. There is a need to develop resistance management strategies that minimise the risk of increased resistance evolution, focus on targeted use of pesticides and include non-chemical options.

In Australia, the oat aphid (Rhopalosiphum padi) causes feeding injury which can reduce cereals yield by 6%, with the damage caused by aphid-vectored viruses reducing yield of cereal crops by up to 30%. Aphid control in these crops is achieved almost exclusively with chemical insecticides, and there is growing concern about insecticide resistance evolution in multiple aphid species.

This project documented the frequency and spread of insecticide resistance in GPA through a national insecticide resistance surveillance program throughout Australia. Over 400 GPA populations were screened for resistance to carbamates, organophosphates, synthetic pyrethroids, neonicotinoids and sulfoximines. Screening was completed using optimised phenotypic methodologies, newly developed molecular markers for GPA populations and testing over multiple known genetic resistance mechanisms. The assessment of resistance was based on genetic screening of alleles for MACE, kdr, super-kdr, as well as amplification of the E4 esterase gene, and finally the CYP6CY3 (P450) copy number, which confer resistance to carbamates, pyrethroids, organophosphates, and neonicotinoids. The risk of incursion and local evolution of the sulfoximine and neonicotinoid-resistant mutation (known as “R81T”) has been evaluated and investigated through predictive modelling and a large network of field traps, followed by genetic testing for this mutation.

An extensive review of resistance risk in aphid species other than GPA was also completed. New knowledge was developed regarding the risk of resistance evolution in grain aphids and based on risk profiles and considerable base-line sensitivity data was established for multiple insecticides for two species deemed to be at risk of resistance evolution in Australia; the cowpea aphid and oat aphid. Nine field populations of oat aphid were collected from localities representing the major grain growing regions of Australia; Tamworth (TMW), Picola (PIC), Dookie (DOK), Pimpinio (PIM), Back Valley (BKV), Adelaide (ADE), Manjimup (MNJ), Capel (CAP) and Katanning (KAT). Toxicity data for each population was established against four insecticide classes (organophosphates, synthetic pyrethroids, carbamates, neonicotinoids). Genotyping has revealed GPA from many field-collected populations are resistant clones, possessing resistance to organophosphates, carbamates, pyrethroids and neonicotinoids. The use of pyrethroids and pirimicarb (even at high rates) will not provide control against these populations. Interpreting resistance-testing results for organophosphates is more complex. The amplified carboxyl-esterase mechanism leads to organophosphate resistance in GPA. This mechanism is unusual because it is regulated by DNA methylation and can be ‘switched on’ in response to environmental conditions such as weather events or pesticide exposure. As a result, aphids carrying the E4/FE4 gene amplification can quickly adapt to survive organophosphates. The GPA populations that have this gene amplification are expected to have a moderate level of resistance (5- to 20-fold) to organophosphates; including dimethoate, omethoate and chlorpyrifos. A baseline sensitivity of spirotetramat and cyantraniliprole has demonstrated high sensitivity in all GPA populations tested (de Little et al. 2017a).

For neonicotinoids, a subset of populations was screened using phenotypic laboratory bioassays as well as testing for the overexpression of the P450 monooxygenase CYP6CY3 detoxifying gene. Low-level resistance was found across most field-collected populations. Under field conditions, this resistance mechanism is likely (although not confirmed) to shorten the length of protection offered by neonicotinoid-based seed treatments on canola. Importantly however, complete chemical field failures are unlikely given the low level of resistance exerted by the overexpression of the CYP6CY3 gene (de Little et al. 2017b).

A sensitivity shift was also identified to sulfoximines in a small number of GPA populations collected from Western Australia (WA) around the Esperance region. Four populations had significantly higher tolerance to sulfoxaflor, based on LC50, compared to other populations and the susceptible control (Figure 2). The resistance factor was 7, 8, 10, 23 for Cascade1, Cascade2, Munglinup1, and Munglinup2, respectively. These represent tolerance to dosage below the field rate. 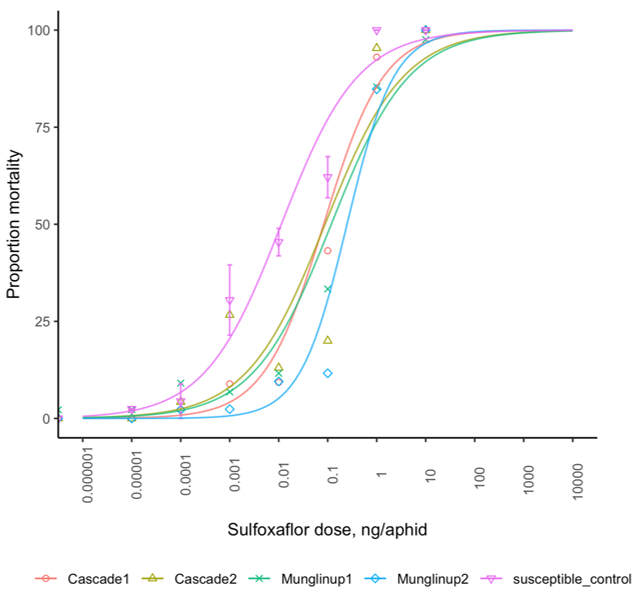 Figure 2. Dose response of sulfoxaflor for four GPA populations and the susceptible control.

Within nine to eleven months of the original phenotypic assay, Munglinup2 showed a significant decrease in sulfoxaflor tolerance, while Cascade1, Cascade2 and Munglinup1 remained at the same sensitivity level as before (Table 1). Recently, Wang et al. (2018) selected a strain of M. persicae for resistance to sulfoxaflor in the laboratory, which showed 199-fold resistance after 45 generations compared with the starting population. The mechanism responsible for this laboratory-selected resistance has not yet been elucidated. Interestingly, Wang et al. (2018) found a significant decrease in aphid survival rate, longevity, fecundity and duration of production compared with the susceptible strain, suggesting strong fitness penalties. Perhaps this, at least partly, explains the results observed for Munglinup2.

None of the known mechanisms of resistance to other modes of action explained the sulfoxaflor sensitivity shift observed. Overseas, the mutation R81T, present in the loop D region of the b-1 subunit of the nicotine acetylcholine receptor gene, is present in European GPA populations and results in sulfoxaflor resistance (observed resistance ratio of approximately 70). This mutation was screened in the above populations and was not observed.

To understand the domestic risk of evolution of further neonicotinoid resistance, such as R81T mutation, the spatial patterns in neonicotinoid applications in Australia was quantified by combining land use data with sales and market research data contributed by agrichemical and agribusiness companies (Cushen et al., submitted). In line with global trends, nearly half the volume of agricultural neonicotinoid products in Australia are applied as seed treatments in cereal, oilseed, cotton and legume crops. This poses risks for the local evolution of R81T mutation in Australia. Dryland cropping regions of cereals, oilseed, and legumes in south-eastern Australia with high estimated usage of neonicotinoids were frequently identified near stone fruit orchards, which has implications for sexual reproduction, thus evolutionary response, in GPA. Similar conditions exist in the south-west of Western Australia, although with lower estimated usage intensity of neonicotinoid products.

The R81T mutation was not found in any Australian GPA (Table 2). The consequences of R81T would be significant to the grains industry; rendering all neonicotinoids ineffective, as well as conferring cross-resistance to sulfoximines. Of the 299 yellow sticky traps that were processed across most of the Australian grain growing regions, GPA were detected on 181 or 60% of traps (Table 2). Most GPA detections occurred in southern Australia. Of the 181 GPA positive samples, all were negative for the R81T mutation, supporting the notion that Australia is presently free of this resistant biotype (Maino et al. in preparation).

For three of the chemical classes tested (organophosphates, carbamates and neonicotinoids), there were no differences in the nine oat aphid population responses. However, for pyrethroids, a widely used insecticide class in Australia, there are statistically significant differences between several aphid populations (Figure 3). After 48hrs, there was a significant difference in dose response curves between populations (c2 = 23.92, df = 8, p = 0.002) for alpha-cypermethrin (Umina et al. submitted). The population from KAT responded differently compared to aphids from TMW (p = 0.006), MNJ (p = 0.03) and PIC (p = 0.02). Aphids from these three populations were less sensitive to alpha-cypermethrin compared with KAT (Figure 3). The LC50 values across all nine populations ranged from 0.6 to 24.57mg a.i./L. The field rate of alpha-cypermethrin (125 mg a.i./L) controlled 98%, 93% and 90% of aphids from ADE, MNJ and TMW, respectively. For the remaining six populations, the field rate was adequate in supressing 100% of individuals after 48 hrs. 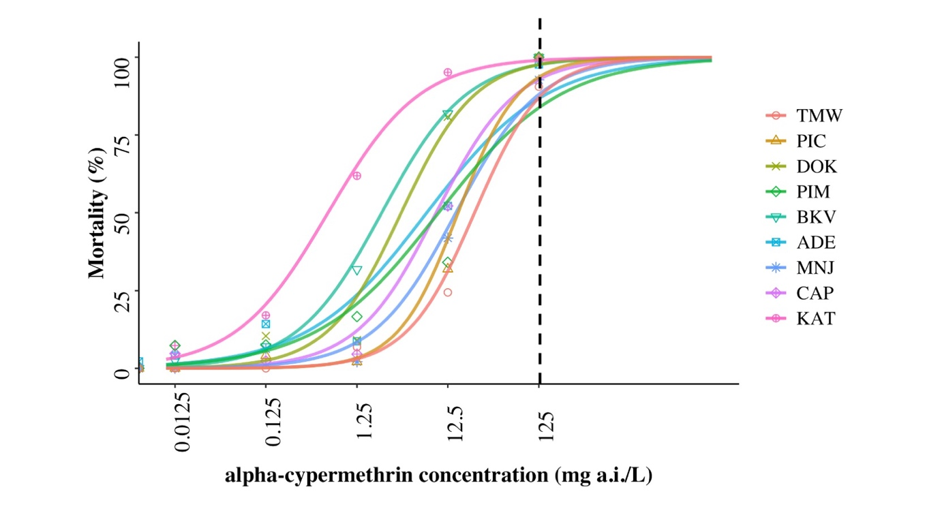 The research presented above leads to key implications for aphid management.

The research undertaken in this project was made possible through the financial contributions of GRDC. We thank Corteva Agriscience, CropLife Australia and Bayer Cropsciences for their support. Thanks also thank WA DPIRD, and the many growers and advisors for their assistance with aphid collections.