An important management strategy to maximise yield potential for canola is to sow varieties within their correct sowing window so they start flowering within the optimum flowering period for a particular location. Flowering too early increases the risk of frost damage, upper canopy blackleg and sclerotinia stem rot infection. Flowering too late increases the risk of damage from heat or moisture stress or both, potentially reducing yield.

The optimum start of flowering (determined as 50% of the plants with one open flower) differs for each location. For Trangie, this date is between 15 July and 12 August, with the optimum date being 29 July. The optimum start of flowering for Wagga Wagga is between 31 July and 1 September, with the optimum date around 16 August. For varieties to start flowering within this period, a variety’s phenology needs to be understood so growers can sow varieties in the correct window for flowering to start during this optimum time.

Table 1 lists the details of the varieties sown across the years at Trangie and Wagga Wagga.

The first sowing date for Trangie in 2018 was in late March, however it was abandoned due to poor establishment caused by high temperatures and a rapidly drying seedbed, so an alternate sowing was done in late May. Table 2 lists the sowing dates for each year for each location.

At Condobolin in 2018, five commercial grown varieties were chosen with a wet and dry treatment. Each variety had two N rates applied a rate to suit a decile 3 rainfall year and a rate for a decile 9 rate rainfall year (Table 3).

Table 2. The sowing dates for each year at each of the locations

The first sowing date for Trangie in 2019 was 4 April, the second sowing date 26 April. Nuseed Diamond and Hyola 350TT were the first to flower on 13 and 14 June, well before the optimum start date for Trangie. Varieties flowering this early puts them at a higher risk of frost damage, upper canopy blackleg infection and sclerotinia stem rot. The late maturing varieties were the only ones to start flowering after 15 July from the 4 April sowing date, with SF Ignite TT flowering closest to the optimum date of 29 July. From the late sowing date of 26 April, all early–mid, mid and late season varieties flowered within the optimum start of flowering period. The early season variety Nuseed Diamond started flowering just outside the optimum period between on the 15 July. (Figure 2).

Nuseed Diamond was the first to flower from the 26 March sowing at Wagga Wagga in 2020, flowering on the 13 June, 48 days before the optimum start of flowering period of the 31 July. The only varieties to flower after the 31 July from the 26 March sowing were InVigor R 5520P, Pioneer 45Y23 (CL), Pioneer 45Y91 (CL), Pioneer 45Y28 (RR), ATR Wahoo and SF Ignite TT. ATR Wahoo and SF Ignite TT were the latest to flower on the 10 August. Delaying the sowing date to late April (27 April), the majority of varieties started flowering within the optimum start of flowering period for Wagga Wagga (31 July – 1 September), the earliest being Nuseed Diamond on 10 August. Pioneer 45Y91 (CL) was the last variety to reach start of flowering on 4 September (Figure 3). 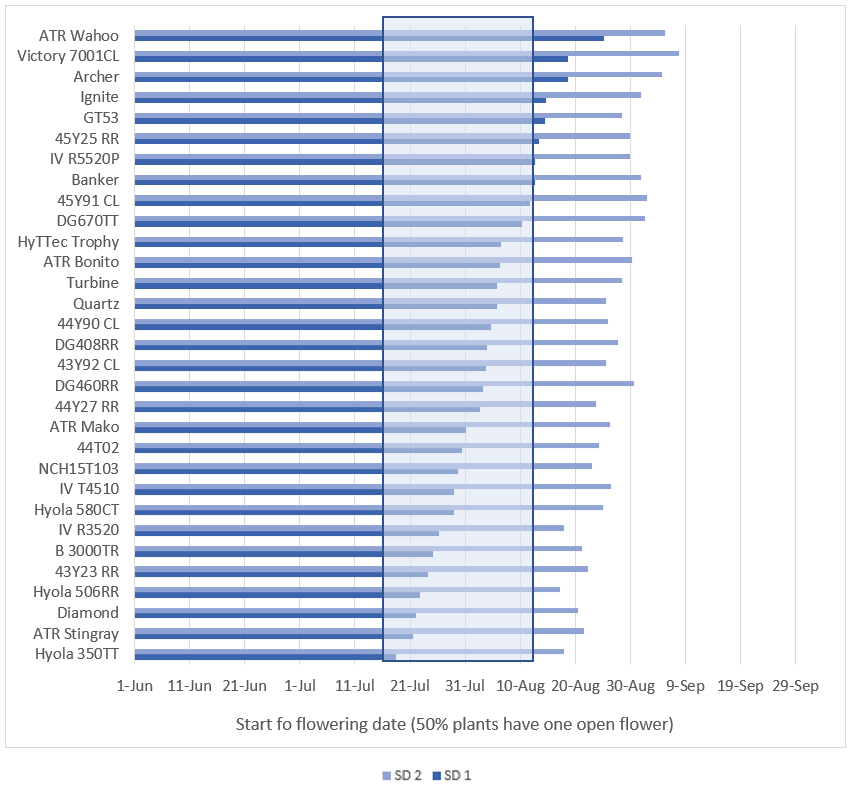 Figure 1. Flowering dates for 2018 Trangie. The shaded area shows the optimum start of flowering period (when 50% of plants have one open flower) for Trangie (15 July to 12 August). Sowing date (SD) 1 (darker bars) was 26 April, sowing date 2 (lighter bars) was 23 May
(Some of the varieties in the figure above are protected under the Plant Breeders Rights Act 1994. Please see Table 1 for which varieties) 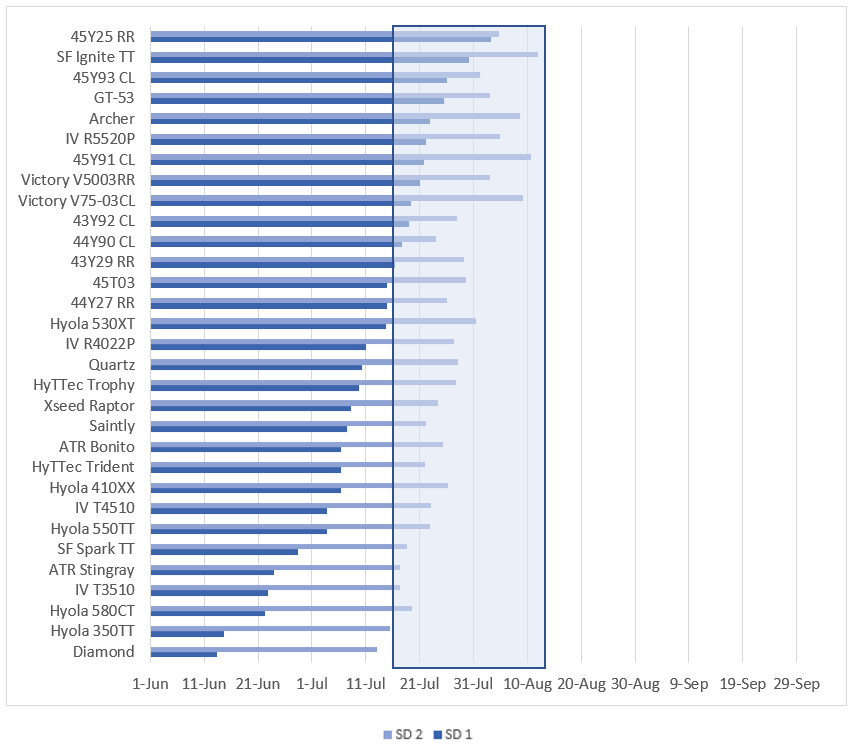 Figure 2. Flowering dates for Trangie, 2019. The shaded area shows the optimum start of flowering period (when 50% of plants have one open flower) for Trangie (15 July to 12 August). Sowing date (SD) 1 (darker bars) was 4 April, sowing date 2 (lighter bars) was 26 April.
(Some of the varieties in the figure above are protected under the Plant Breeders Rights Act 1994. Please see Table 1 for which varieties) Figure 3. Flowering dates for Wagga Wagga, 2020. The shaded area shows the optimum start of flowering period (when 50% of plants have one open flower) for Wagga Wagga (31 July to 1 September). Sowing date (SD) 1 (darker bars) was 26 March, sowing date 2 (lighter bars) was 27 April.
(Some of the varieties in the figure above are protected under the Plant Breeders Rights Act 1994. Please see Table 1 for which varieties)

At Condobolin in 2018, Nuseed Diamond with a Decile 9 N rate and watered to achieve a total supply of 307mm (subsoil water + in-crop rainfall) was the quickest to flower from the first sowing date (5 April), flowering on 3 July, 23 days earlier than the optimum start of flowering period (26 July – 16 August). Both Nuseed Diamond and ATR Bonito with a Decile 9 N rate in the dry treatment (151mm in season rainfall), flowered close to the optimum start of flowering date of 9 August from the first sowing date, up to a month later than the watered treatment, indicating that moisture stress in plants will delay the start of flowering. In most cases, varieties in the dry treatment flowered well after those in the wet treatment, with the mid and longer season varieties (ATR Bonito from the second sowing date, Pioneer 44Y90 (CL) and ATR Wahoo) flowering outside the optimum flowering window, putting them at a high risk of heat stress (Figure 4). 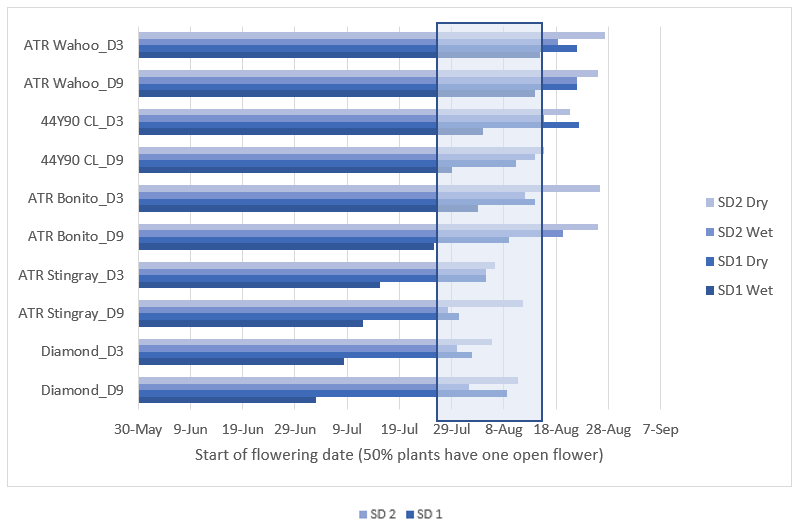 Figure 4. Start of flowering dates (50% of plants have one open flower) for wet and dry treatments and N rates for Condobolin, 2018. D3 and D9 relate to the Decile N rates applied. Shaded area is the optimum flowering window for Condobolin (26 July to 16 August). Sowing date (SD) 1 (darker bars) was 5 April, sowing date 2 (lighter bars) was 26 April.
(Some of the varieties in the figure above are protected under the Plant Breeders Rights Act 1994. Please see Table 1 for which varieties)

Flowering time and therefore flowering within a particular period for a given location is one of the most important drivers of grain yield in canola. Having an understanding of a variety’s phenology and how that variety responds to temperature influences how the variety will perform in different environments and the correct sowing window in which that variety should be sown. During the leaf production stages of canola growth, varieties can be influenced by thermal time, photoperiod or vernal time, or a combination. For instance, winter varieties (not included in these experiments) need a period of vernalisation (cold temperatures) before they will switch from vegetative stages (leaf production) to reproductive stages (bud and flower production) of growth. The time taken within the reproductive stage, for buds to elongate and initiate flowers is also influenced by thermal time and photoperiod. There is no vernalisation requirement within the reproductive stage.

Understanding how a variety responds to thermal time and photoperiod and therefore knowing a varieties phenology will influence a grower’s decision on when to sow that variety to avoid flowering when the risk of frost, disease, heat or moisture stress is higher.

Canola varieties differ in their flowering times depending on where and when they are sown. Sowing a fast variety too early can lead to flowering when the risks of frost and disease are high; sowing a slow variety too late increases the risk of heat and moisture stress.

Matching a variety’s phenology to its sowing time is critical for flowering to start during the optimum flowering period for each region, which is when environmental and disease risks are balanced for the highest yield potential. More information on sowing windows to suit variety phenology can be found in the DPI’s Winter crop variety sowing guide 2020.

This experiment was part of the ‘Optimised Canola Profitability’ project, CSP00187, 2014–19. The project is a collaborative partnership between GRDC, NSW DPI, CSIRO and SARDI.

The research undertaken as part of this project was made possible by the significant contributions of growers through both trial cooperation and the support of the GRDC, the author would like to thank them for their continued support. Thank you to Warren Bartlett, John Bromfield and Tom Quinn for their technical assistance.