Timely sowing of crops to provide optimal establishment, duration of biomass accumulation and flowering time is a key element in achieving yield potential.

Growers base sowing-time decisions on the timing of the seasonal break, variety availability and the capacity to sow their whole program in a timely fashion. In rainfed systems (such as WA) germination and establishment are reliant on autumn rainfall, so the timing of the seasonal break is a key factor in sowing time decision. Across the Australian grain growing region, the autumn break of season is generally becoming less predictable and shifting to later in the season  (Pook et al 2009).

Declining autumn rainfall and a variable season can result in insufficient moisture for germination near the soil surface during the desired sowing window. However, in many cases, especially in the eastern areas of the WA grainbelt, recent years have shown a significant increase in summer rainfall (Morgan et al 2008). Summer rainfall and small autumn rainfall events (so called ‘false-breaks’) can result in subsurface moisture (deeper than 50mm) being available in the sowing window, which may be adequate for germination and establishment. If moisture is present at depth, deep sowing into this moisture would allow growers to sow and get crops up before the season break, potentially offering yield benefits and allowing for more flexibility within their sowing programs.

Sowing depth is an important management decision that strongly impacts on the timing of crop emergence and establishment, with associated effects on rooting depth, biomass and yield. As well as allowing growers to chase subsoil moisture and achieve early sowing times, deep sowing can reduce seed predation and help avoid phytotoxicity of pre-emergent herbicides. Emergence from depth can, however, result in slower and/or reduced emergence and lower early leaf area, leading to lower weed competition and more soil evaporation.

Interest has been growing in WA about the potential to chase water by deep sowing of both long-coleoptile wheats and pulses such as chickpea, however, there is little understanding about how often and in what locations deep sowing will offer a benefit.

Using historical metrological data and APSIM modelling we aimed to gain an understanding of how often a situation occurs where deep sowing would be beneficial, i.e. when surface moisture is sub-optimal for germination but where deeper sowing (50-200mm) could allow growers to sow into soils with significant moisture.

Simulations were compiled with the Agricultural Production Systems Simulator (APSIM; v 7.1). For accurate representation of soil water and evaporation at a fine layer scale we used the Soil Water Infiltration and Movement model (SWIM3). Using metrological data from the SILO Patched Point Dataset we simulated soil water over the autumn sowing window (March through June) in response to climate and location across three towns in the wheatbelt of WA from 1971 – 2020. We used two generic soils at each location (sand and clay) as these present the extremes offered in differences of water holding capacity. Simulations were run under minimal weed load and heavy stubble coverage.

Study sites were selected to cover the range of seasonal condition experienced across the wheatbelt of Western Australia, details of sites chosen are listed in Table 1.

Table 1: Location of sites used in this study with mean rainfall by month over the autumn sowing period, mean growing season rainfall (GSR; June – October) and probabilities of rainfall events over 50mm during the sowing season. Data is from the 50 years (1971 – 2020) used in simulations.

We defined a sowing opportunity as a day when the soil had moisture where germination would occur (sand 8% and clay 18%) and which was also followed by five days that also met this moisture criterion so that establishment would likely occur.

In defining beneficial deep sowing opportunities, we used the same soil moisture criteria over the six days, plus soils also had to be dry at standard sowing depths (20-50mm). Dry soil was defined as soil with a soil moisture equalling <75% of the soil drained lower limit.

Daily sowing opportunity (as availability of enough soil water for seed to germinate, followed by five days of similar conditions) is shown in Figure 1. As expected, sowing opportunity at standard sowing depths (20-50mm) was very low in late March and increased as autumn progresses. Small rainfall events can penetrate the subsurface-soil layers and will then evaporate far slower than in the surface soils, resulting in increased opportunity in deeper layers as compared to standard depths. 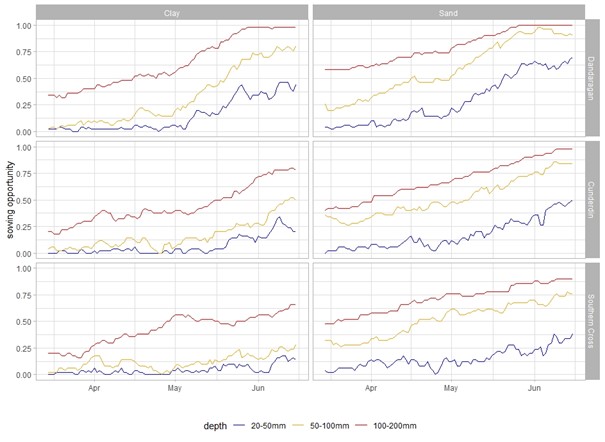 Figure 1: Impact of depth on daily probability of a sowing opportunity (as availability of enough soil water for seed to germinate for at least six days in a row) by location and soil type over the past 50 years (1971-2020).

Given that deep sowing can cause reduction in emergence and establishment, it is not a management option usually undertaken when surface soils have adequate moisture. To understand the probability of these ‘water chasing’ deep-sowing opportunities, we assessed the probability of moist soils over the six days in the deep soil layer, when the topsoil was dry (Figure 2). On very heavy soils, deep sowing to chase moisture is likely to be of only sporadic benefit as small rainfall events are unlikely to penetrate beyond the surface layers. On sands however, significant increases in sowing opportunity exist. In higher rainfall areas, such as Dandaragan, the benefit of deep sowing to chase water is considerable early in the season but this advantage reduces as the sowing window progresses due to a high likelihood of significant rainfall events (and therefore moist surface soils). In dryer regions, such as Southern Cross, where large rainfall events can be sporadic even late in the sowing window, the advantage of deep sowing continues throughout May. Figure 2: Impact of depth on daily probability of a beneficial deep sowing opportunity as availability of enough soil water for seed to germinate for at least five days in a row, while to top 0- 50mm is dry; sowing opportunity in the 2-5cm layer shown for comparison. Graphs are by location and soil type over the past 50 years (1971-2020).

Sowing into deeper soil layers can access extra moisture not available in surface layers. Depending on soil type and location, deep sowing opportunities may be present even when surface layers are dry, this is most likely to occur on lighter soils. In higher rainfall areas these opportunities are most likely early in autumn while in lower rainfall areas, deep sowing can increase sowing prospects across the autumn sowing window.

The research undertaken as part of this project is made possible by the support of the GRDC (GRDC Postdoctoral Fellowship 9176490 which is aligned to GRDC project CSA00056).