Within-field spatial variation of crop yields can occur for various reasons, but perhaps the most important driver of this variation is the soil. There are different management strategies available to growers to address soil constraints (amelioration, adjusting inputs to match potential, switching to growing tolerant species), but a necessary first step is the identification of affected areas (Dang et al., 2010).

Persistent spatial patterns of yield variation within fields that have otherwise been managed uniformly (spatially) provide an indication that soil constraints are driving variation. Remotely sensed data from satellites provide a valuable information source for helping with the task of identifying persistent yield patterns (Orton et al., 2018). In particular, the Landsat series of satellites provide a very useful dataset for several reasons:

While Landsat imagery provides an excellent source of raw data, there are a number of processing and analysis steps required to extract the potentially useful information. We have developed a freely available online software tool, ConstraintID, to make this task easy for growers, and to present results in a way that is straightforward to interpret. The tool should assist growers with identification of potentially constrained areas, giving them the information to make more informed management decisions. Here we present an illustration of the software tool applied to a field in northern NSW.

Remote-sensing data to give crop performance information for all years

The software undertakes the spatial analysis within the confined boundary of a field. It is important that there has been consistent management across the field, so that spatial differences due to management will not be confused with differences due to soil constraints. The software then collates all of the remote-sensing data for this field, and for each year from 1999 to the latest complete season, generates a map of an index representing crop performance. This aim of this index is to show, for any given year, which parts of the field were above average and which parts were below average. In some of these years a winter crop might not have been grown, so the software looks at the growth patterns within each season to check whether the field has been cropped and determines if it that years observations should be included in the analysis. For illustration, Figure 1 shows the resulting maps for the years 2005-2010 at Sunbury. In this case, the software deemed that there was good evidence of 2005, 2006, 2008 and 2009 being cropped years (shown by the green ticks), so these would be included in further analysis. Figure 1. Maps of the index representing the spatial distribution of crop performance at Sunbury for the years 2005-2010. Green (darker areas) shows relatively good crop performance, beige relatively poor. The tick or cross in the corner of each panel indicates whether the analysis deemed that year to have been cropped or not.

It is important to note that the spatial pattern of the index has some aspects that repeat year after year, and other aspects that do not repeat. For example, in Figure 1 it seems that the east of the field was consistently higher yielding than the west. Also note that this was not the case in 2007, though for that year the field was deemed to not have been cropped. This highlights the importance of having a multiyear analysis when the goal is to identify soil constraints, which we would expect to give rise to similar spatial patterns of yield year after year (as opposed to diseases or weeds which might give reduced yields in part of the field in isolated seasons).

To identify the patterns that repeat season after season, the long-term average of the index is calculated for each pixel (using only the years when a crop was grown). A statistical test is then performed to evaluate whether there is evidence that a pixel consistently performs above or below average. Figure 2 shows an example of this type of analysis, from which it is clear that the east side of the field gave consistently better performance than the west side. Within some fields there will not be strong variation in soil constraints, and then we might not expect much consistent variation in yields. However, for fields where soil constraints exhibit strong within-field variation, we would expect a consistent pattern of spatial variation, such as that illustrated in Figure 2.

The maps shown so far are based only on analysis of the remote-sensing data. Soil data from within the field are vital to validate what is causing the variation in yield. Information from the remote-sensing analysis (Figure 2) can be used to select locations for soil sampling. An advisable strategy might be to collect soil cores to a depth of 1.2 m from a few locations (minimum 3-4) in the areas with consistently high values of the crop yield index (green (mostly to the east) areas in Figure 2) and from a few locations in the consistently poor-performing areas (red (mostly to the west) areas in Figure 2). Once a dataset of soil analysis results from profiles in the field has been compiled, the software tool allows the user to upload/input the data, and it can be used to compare soil constraints in the  in the good and poor-performing areas of the field.

For the Sunbury field, ten soil profiles were collected, of which two profiles were in the areas with consistently low crop yield index values, and three were in the consistently high yield index areas. The soil constraint data from the profiles in the better-performing areas are averaged and plotted as the green lines (generally to the left) in Figure 3; the red lines (generally to the right) show the averages from the poor-performing areas. Also shown are critical values for potential (light orange background - on left) or severe effects (light red background – on right) of the soil constraints on wheat yields. These critical values have come from a recent review of the literature on soil constraints to cropping in Australia (Page et al., 2020).

Figure 3. Soil profiles within the areas with consistently high crop yield index values (green - line to left) and consistently low values (red – line to right). More severely constrained zones are delineated by colour coding and are to the right side of each graph.

The web-based interface of Constraint ID allows farmers and consultants to setup, save and share soil constraint analyses for different paddocks (Figure 4). 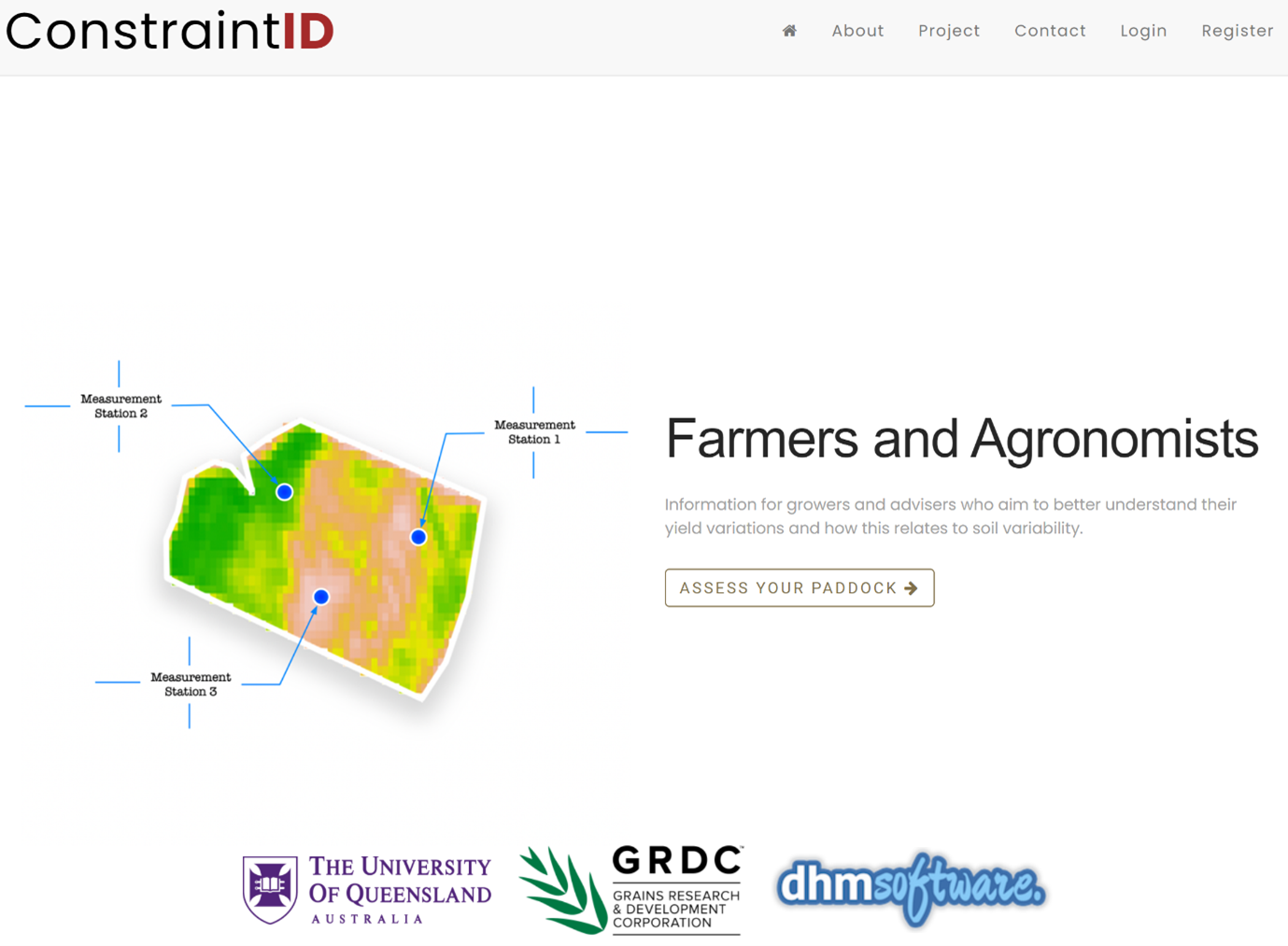 An analysis is broken down into 6 steps presented through the interface: 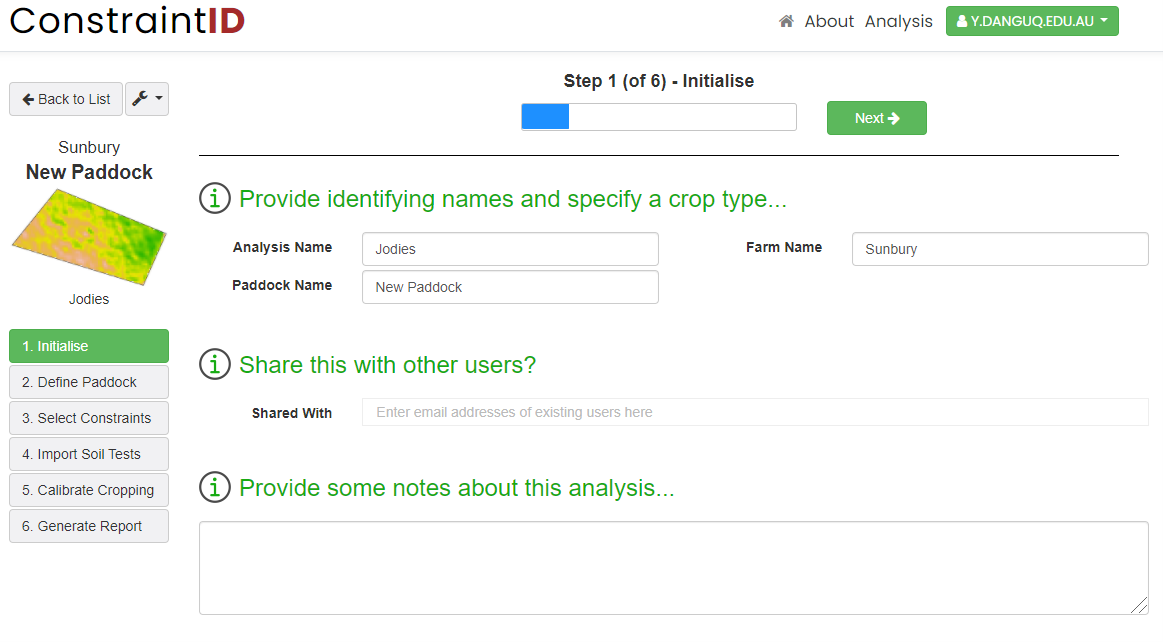 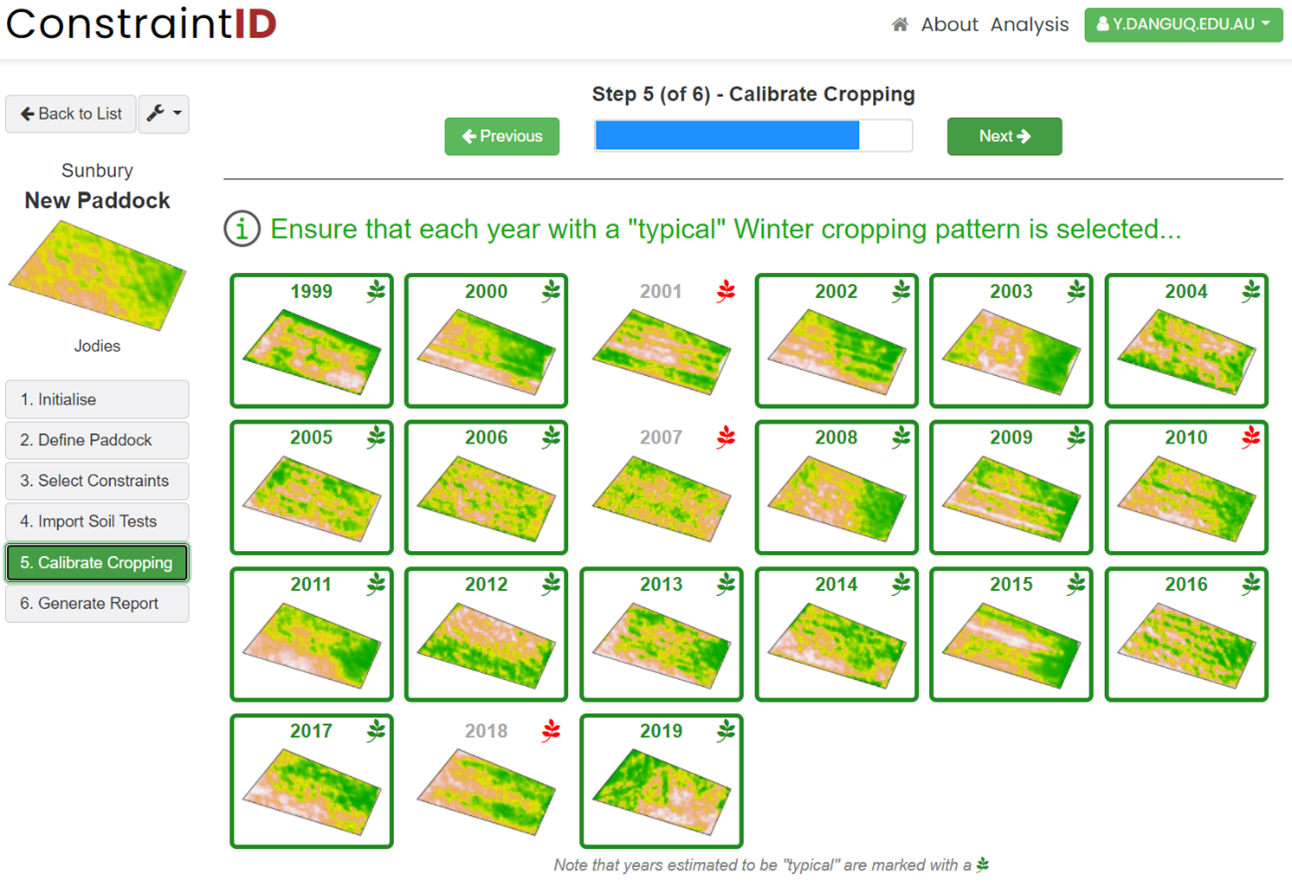 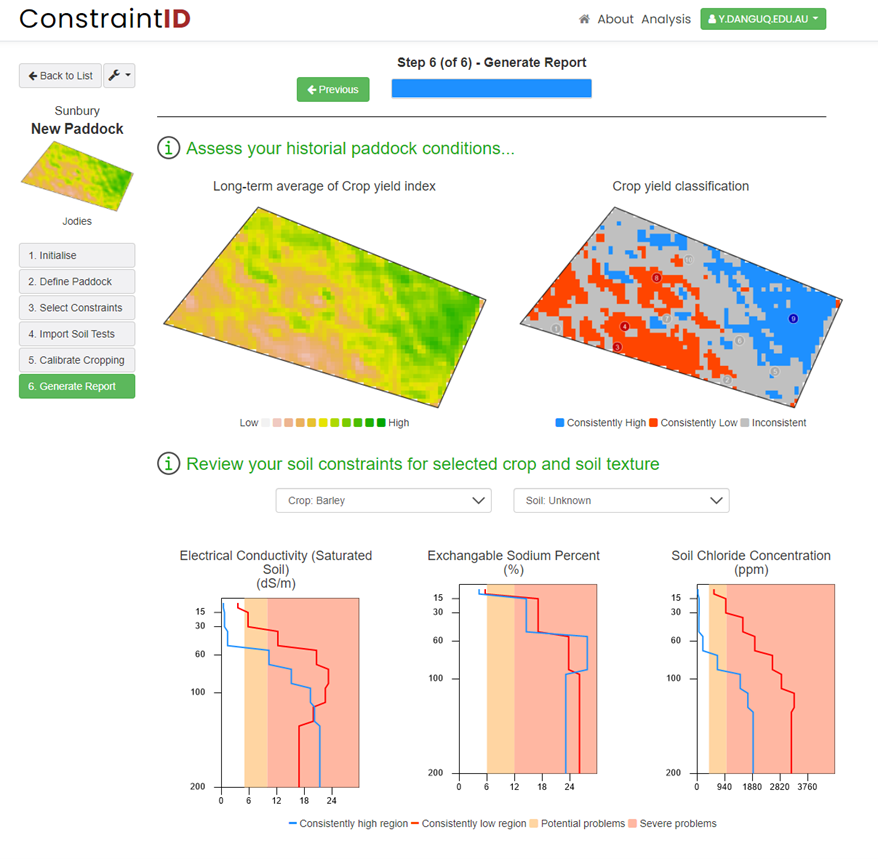 For each analysis, the software requires the user to trace their paddock boundary over a Google Maps’ satellite image, using tools provided in Step 2. This then initiates the start of the spatial analysis which occurs silently in the background on the server. In this process, a time-series of 'Enhanced Vegetation Index (EVI)’ satellite images from 1999 to the present date are extracted which typically include up to 20 images (days) per year. These tiled images are then reprocessed to exclude any data outside of the paddock boundary.  In some cases, multiple adjoining images may require stitching together when the paddock boundary extends past the tile boundary. The resulting paddock images are then filtered to remove any that might be affected by excessive cloud cover or are indicative of fallow conditions. Finally, the individual EVI pixel values are ranked in order across the paddock to differentiate between high vegetation and low vegetation areas of the paddock. A single image is then produced for each year, based on averaging the ranked EVI values for that year, which we designate as the Crop Yield Index (CYI). This process typically takes 10-20 seconds to complete.

In the next steps (3 & 4), the user selects which soil constraints they wish to analyse and upload any measured soil test data they have relating to these constraints.  Soil test data must be prepared in a comma-separated value format and uploaded to the server via dragging and dropping the data files into the user interface. Users must then identify which columns in the data files correspond to each soil constraint using in-built selection tools.

The second last step of the analysis involves the user being presented with a series of paddock images (generated in the second step) showing the Crop Yield Index across the paddock for each year. Each image is ’marked’ to show whether or not the software thinks that that year was indicative of a typical cropping year. The user must then inspect each image to ensure that all typical cropping years are selected, and non-cropping years are de-selected. This in effect is calibrating the analysis in order to generate the final result.

In the final step of the analysis, all included cropping years are compiled into a single paddock map of Crop Yield Index values. A second image is then generated identifying those regions of the paddock that have demonstrated consistently high Crop Yield Index values (coloured blue) or consistently low values (coloured red). The locations of the soil test readings are then overlayed on these regions, allowing a graph of each soil constraint to be generated based on the soil test results, with different lines for high and low yielding areas.

The work presented here provides a snapshot of the Constraint ID software, which we think should provide growers with a valuable tool for investigating within-field variability and for making more informed management decisions. Further work to investigate and compare different management strategies once constrained areas have been identified is imperative.