How heat tolerant are our current wheat varieties?

Some Australian cultivars are significantly more heat tolerant than others when heat stress is applied at anthesis and grain filling growth stages. Materials identified and developed through this project provide new genetics for heat tolerance that can be used to improve the heat tolerance of current varieties.

Extreme heat events may become 85% more frequent and 57% longer in the coming decades due to the increasing impact of climate change (Syktus et al; 2020). Wheat is highly sensitive to extreme heat during anthesis (flowering) and grain fill growth stages. This can have a significant impact on final crop yield and quality. Heat stress at anthesis often affects pollen fertility which reduces the number of kernels produced by each spike. For every one degree rise in the average maximum temperature above the optimum (5°C to 28°C), it is estimated that kernel number decreases by 4% (NSW DPI, 2007). An extreme heat event at grain fill can negatively impact kernel size as it disrupts the translocation of nutrients and the synthesis and deposition of starch.

The most effective way of assessing the performance of a genotype and its range of physiological responses is to screen materials under stressful environmental conditions. Screening methods for heat tolerance often involve single tiered techniques, usually in a glasshouse setting, which can lack relevance to farming environments and does not always represent the most relevant materials. This paper discusses the findings of the second tier of a three-tiered technique developed specifically to screen for heat tolerance (Thistlethwaite et al., 2020). This method evaluates germplasm by combining natural and controlled conditions using in-field controlled environment chambers.

The hidden costs associated with a rise in global minimum temperatures, especially late in the season, is the reason a nighttime heat treatment was imposed at grain fill. Different physiological processes occur within a plant during the night compared with during the day. Some varieties could be more efficient at recovering during the night which would then allow them to cope much better when the temperature was high during the day. The physiological basis of this phenomenon remains limited; however, evaluations such as this are a step towards a better understanding of why, rather than how, varieties differ from each other.

In-field controlled environment chambers, designed to fit over a 4 m2 of a plot, were used to increase the maximum ambient temperature for three consecutive days at anthesis and increase the minimum ambient temperature for three consecutive nights during grain fill (Figure 1). Each chamber unit was 2 m x 2 m x 1.5 m (length x width x height) in dimension. Chamber units consisted of a galvanised steel frame covered in clear polycarbonate. HOBOware® weatherproof temperature and humidity data loggers with a temperature measurement range of -40 °C to 70 °C with ±0.2 °C accuracy and a relative humidity (RH) measurement range of 0 to 100% with ±2.5% accuracy was installed in all units and fitted with a radiation shield.

A positive temperature coefficient (PTC) thermistor with resistance increasing with temperature was installed with output fed to a SPLat HVAC26A AC controller. Each individual chamber was fitted with a domestic reverse cycle air conditioning (AC) unit rated to 3.9 kW heating and 3.6 kW cooling with a maximum full load current of 8.5 amps and ducting ran from the AC unit to the chamber. A 15 kVA 3-phase diesel generator was used to provide in-field power to the chamber units.

Spikes that were deemed to be at the correct stage for treatment were tagged and subsequently harvested to ensure the accuracy of plant growth stage. Yield, yield components and targeted phenological and physiological traits were assessed at key growth stages. Irrigation was applied based on Goanna moisture (capacitance) probe readings to ensure well-watered conditions throughout the season.

Ideally, this evaluation of commercial varieties should be repeated across multiple years and sites due to potential variation in environmental conditions and to allow for the best representation of the germplasm. In previous years, in-field controlled environment chambers were used primarily to assess new heat tolerant material rather than commercial varieties due to the availability of chambers.

Note: means in rows followed by the same letter are not significantly different at P<0.05 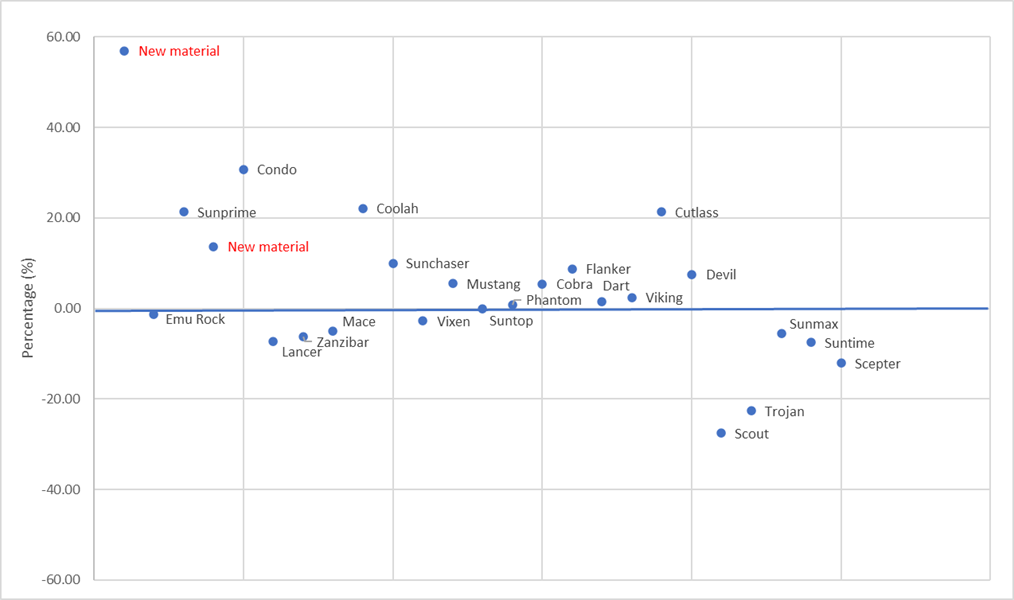 Figure 3. Yield of 10 heads for anthesis treatment of current cultivars under elevated day temperature treatment as a percentage (%) of Suntop which is represented by the x-axis (0.00%).
(All the named varieties in the graphs above are protected under the Plant Breeders Rights Act 1994)

This was closely followed by AGT Suntop, Coolah, Suntime and Scepter (Figure 4). In some cases, as with RGT Zanzibar, AGT Sunmax and Suntop and LRPB Mustang, the heat treatment slightly outperformed the control. The varieties that were the most stable between treatments included Intergrain Devil, AGT Sunchaser and LRPB Phantom although they didn’t have as high a yield potential. CIMMYT breeding line (CMSA08Y00613S-050Y-050ZTM-050Y-59BMX-010Y-0B) surpassed all current varieties for kernel weight. 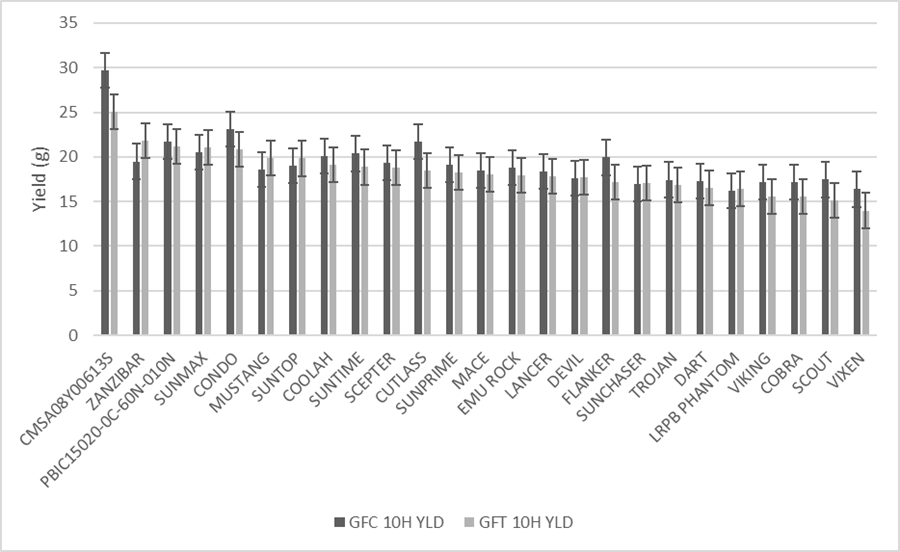 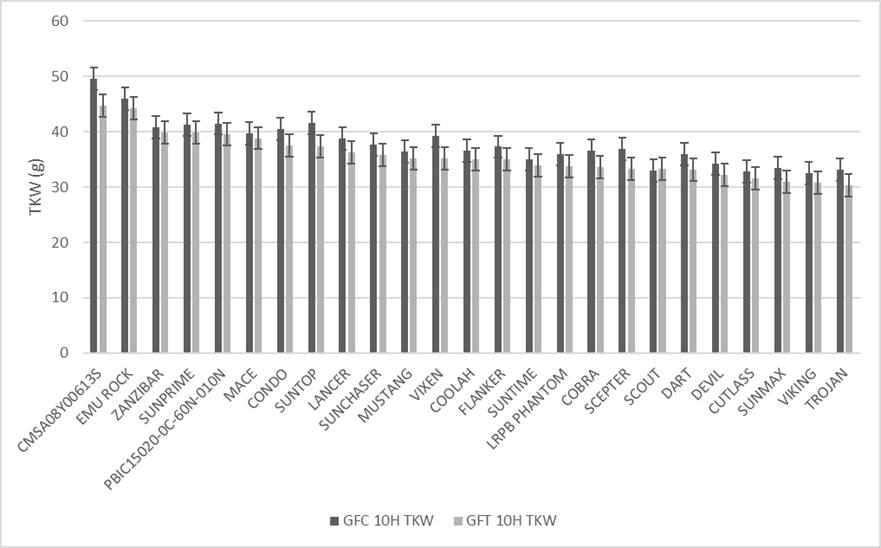 The authors acknowledge the funding support of the GRDC, the University of Sydney and Agriculture Victoria, and the in-kind contributions of Intergrain and AGT.