This project studied the risk of infestation by the Russian Wheat Aphid (RWA, Diuraphis noxia Kurdjimov) and its effect on yield to develop best management practices in an Australian context of winter cropping of short cycle cereals (e.g. spring wheat). Risk of yield loss depends on aphid invasion, subsequent pest development and sensitivity of the crop to the pest.

Previously, there were no data available for quantitative and qualitative yield effects of RWA and the development of intervention thresholds in Australian cereal growing conditions. Overseas data, from North America and South Africa, where RWA has been present for many decades (Archer and Bynum 1992; Du Toit and Walters 1984; Du Toit 1986; Bennett 1990a,b; Kieckhefer and Gellner 1992; Girma et al 1990, 1993, Mirik et al 2009, Legg and Archer 1998, Chander et al 2006), report a wide range of potential damage levels (yield loss and qualitative losses) and derived economic injury levels. Losses of around 0.5% of yield loss per percentage of RWA infested tillers during stem elongation and grain filling are most frequently reported (Archer and Bynum 1992).

These knowledge gaps were addressed through

Risk of RWA invasion of crops: Overall RWA risk was very low during these two (very dry) years with no significant RWA infestation occurring in any of the non-inoculated field trials. This shows that the largely adopted use of prophylactic seed treatments against RWA was not justified. 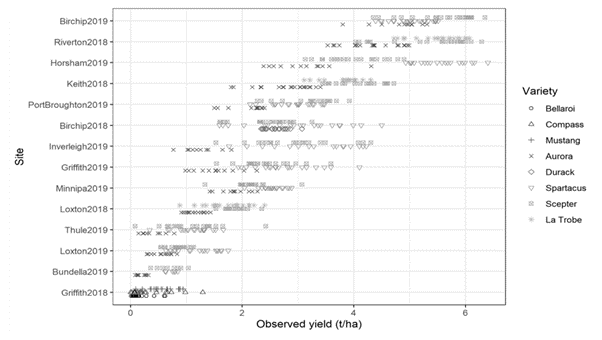 Yield loss in inoculated trials: Regional and varietal differences were large (Figure 1). In some, but not all, of the inoculated field trials RWA populations reached population levels (maximum observed between GS40 and 50) resulting in yield loss. The best predictor of yield loss of various aphid pressure metrics was the maximum percentage of tillers with RWA present (%TwRWA) and a percentage of the potential yield loss with a 0.28% yield loss observed for every %TwRWA. This simple relationship applied to all the different cereal types (wheat, barley, durum wheat), years and regions (through the adjustment of potential yield), oat did not allow RWA development. This yield impact is significantly lower than described for the USA (0.46-0.48% for every %TwRWA, Archer and Bynum 1992).

From this equation, the economic threshold (the break-even point of yield loss and control measures) can be calculated depending on the costs of control (pesticide, applications costs), the expected yield (region and year dependant) and the farm-gate price of the crop as parameters (Figure 3).

Figure 2. Percentage of tillers with RWA (%TwRWA) against growth stage for the RWA inoculated untreated control plots (AI-UTC) in all inoculated trial sites in 2019.

RWA population development: After inoculation with RWA, the highest RWA populations developed in drier regions, through a combination of increased RWA establishment during inoculation and increased rates of subsequent population increase. Less tillering in dry areas also contributed to a higher %TwRWA. The maximum population of RWA and the maximum %TwRWA was reached between GS40 and 50 (Figure 2) followed by a decrease. Between the end of tillering (GS30) and GS50 an increase in the %TwRWA of 0.021%/%/day was observed. This would result in a doubling of the %TwRWA every 35 days.

Action threshold calculator: Based on these observations and equations, we propose a decision rule (action threshold, Figure 3) for RWA management using an observation of the percentage of tillers with symptoms and the %TwRWA at GS30. This observation and the expected increase in %TwRWA (based on the expected time to ear emergence GS50), inform the need for management action, which can (if needed) be combined with existing treatments at GS32-35, thus reducing application costs. Growers and advisers are directed to the GRDC calculator (see additional resources) to calculate thresholds for their growing conditions” Green bridge risk: The environmental conditions over summer that form a ‘green bridge’ of suitable (grass) habitat between winter crops were expected to determine the risk of early colonisation events. Barley grass (Hordeum leporinum) and (to a lesser extent) Brome grasses (Bromus sp.) were the host plants that showed the highest combination of abundance, positive RWA detection frequency and aphid numbers. These introduced species are not summer active in low rainfall areas. In low rainfall areas, the native Enneapogon nigricans (bottle-brush) is the most important summer refuge because of its widespread distribution (207 samples collected from 135 sites) and summer growth pattern. Grazing and water availability (irrigation) can make some host grass populations, including prairie grass, couch grass, ryegrass and volunteer cereals, persist in summer. The presence of irrigated crops increased the likelihood of RWA detections 1.6-fold over the green bridge.

Early rainfall in late summer/autumn, 2-3 months before sowing, could cause RWA population to build up on grasses and cereal regrowth, potentially exacerbating early crop invasions. A 250 mm high rainfall event in the Birchip area (Vic) in December 2018 did cause significant development of a green bridge, but did not seem to result in increased RWA risk. Reports in 2020 from the Port Augusta area (SA), where a significant summer rain occurred on February 1st, suggested an increase in RWA pressure. This shows that observations, especially in early break years and better understanding of aphid population dynamics and migration on the green bridge before and after sowing, are needed to obtain more precision on the impact of the green bridge and the risk and timing of crop invasion.

A ‘wetter’ year with a higher green bridge, or if immigration of aphids occurs at a higher level for some other reason, might increase aphid colonisation, but will not automatically result in higher impact of RWA. Wetter and colder conditions are less favourable for RWA development in the crop (as can be seen from the Tasmanian trials), through a combination of slowing down population development, improving the crop development which will better resist RWA, and more tillering (diluting the aphid numbers over a lower % of tillers. The two experimental years experienced generally low levels of growing season rainfall, so RWA development in the crop (after inoculation) was probably maximal on these often drought stressed crops.

Crop sensitivity: Similar yield impact and aphid population development was observed for all crops tested, except for oats which is known not to be an RWA host. However, crop and varietal differences in RWA establishmentare likely to exist and have been reported. Also, the crop condition (growth stage, level of tillering, drought stress, nutritional stage) will play a role in RWA development and could change the probability of reaching above threshold populations.

RWA ecology and yield impact in Australia are now somewhat better understood. This allows growers and agronomists to manage RWA more sustainably and economically. Management based on observations and regionally adapted decision rules, rather than an over-reliance on prophylactic seed treatments, will increase profitability, minimise chemical inputs and reduce off-target risks and resistance development.

The two years during which this study was done were very dry, with hot summers and growing seasons, and were generally unfavourable for RWA survival over summer, but favourable for the development of RWA in the inoculated trials (Baugh and Phillips 1991, De Farias et al. 1995). Some anecdotal observations in 2020, and in the few years that RWA is known to be present (since 2016, Ward et al 2020, Yazdani et al 2018), do suggest that the population levels will be very different (but not necessarily more damaging) with different rainfall patterns. More experience and research are needed to better understand RWA ecology and would enable further improvement to management guidelines.

The geographical distribution of RWA is expected to increase further into northern NSW and Queensland (Avila et al. 2019), and RWA was detected in Western Australia in 2020. Different growing conditions (temperature, drought) and presence of other cereal crops, including summer cereals (rice, corn, sorghum, millet), and other grass hosts could alter the risk of RWA in those regions.

The research undertaken as part of this project is made possible by the significant contributions of growers through both trial cooperation and the support of the GRDC, the author would like to thank them for their continued support. Trials were run through multiple contractors requiring long hours of careful observations. Special thanks to Courtney Proctor, Bonnie Wake and Millie Moore for data management and long trips required for aphid inoculations and scoring trials, and Farah Al-Jawahiri for aphid rearing.