Annual ryegrass has high genetic diversity. This has allowed it to become widely adapted across southern Australia, but also allows it to adapt to changes in the environment. One of the most obvious adaptive traits of annual ryegrass is the widespread evolution of herbicide resistance. However, this is not the only way annual ryegrass populations evolve. In the 1970s, studies of annual ryegrass emergence found 95 % of the population emerged in two flushes shortly after the autumn break of the season. By the 2000s, studies were finding higher levels of seed dormancy and carryover between seasons for annual ryegrass.

These changes in germination pattern are not just due to environmental conditions. Figure 2 shows the germination patterns of 3 populations of annual ryegrass from fields on the University of Adelaide’s Roseworthy farm in the mid-north of South Australia. Even with the same environment, there are differences in emergence pattern for the different fields. The Roseworthy farm is operated as a mixed farming enterprise. Buckby is located at the extreme northern end of the farm and has been continuously cropped for more than 20 years. The other two fields have also been cropped for much of that time, but lucerne and pasture have also been grown in those fields. 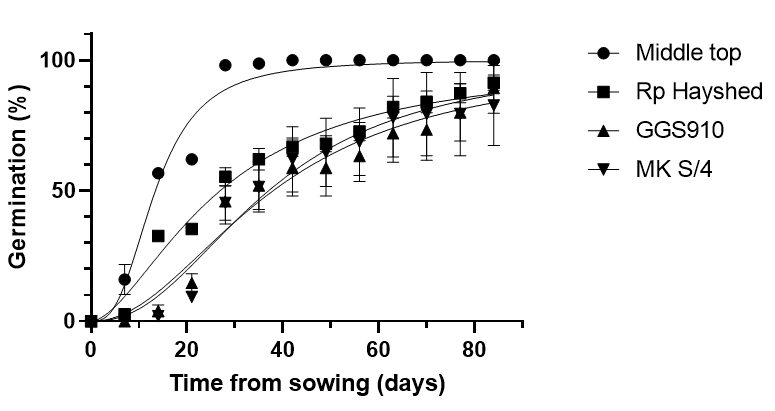 Figure 2. Germination pattern of three populations of annual ryegrass from fields on the Roseworthy farm in South Australia tested under ideal conditions.

Early and late germination is heritable

Figure 3. Germination of high and low dormancy sub-populations of annual ryegrass from two populations created by selecting early and late emerging individuals from each population.

As has been observed with brome grass and barley grass populations, it is evident that annual ryegrass populations are evolving in response to continuous cropping by developing more dormant populations. These can escape knockdown herbicide control and emerge once pre-emergent herbicides have declined in concentration. Our previous work looking at early versus delayed sowing in continuously cropped fields found that annual ryegrass numbers in crop were not different with sowing at the start of May compared to the start of June, despite an extra knockdown herbicide application. The selection for increased dormancy in annual ryegrass will be slower than in barley grass and brome grass, due to annual ryegrass being an obligate outcrossing species.

High emergence of annual ryegrass was seen in 2020 – Was this predictable?

The short answer to this question is “Yes”. To understand why, we need to go back to 2016. In 2016, there was an extended wet spring (Figure 4). While this was good for grain yield, it was also good for annual ryegrass seed set. The wet spring also made it hard to get crop-topping applications right and more ryegrass seed was shed before harvest. In addition, cool wet spring periods result in seed with greater dormancy than in years with dry springs.

Emergence of annual ryegrass from the soil seed bank requires sufficient moisture, primarily in autumn and winter when the soil temperature has fallen, and the loss of primary dormancy of seed in the seed bank. Shallow seed burial can encourage emergence; however, deeper burial discourages emergence and induces secondary dormancy, extending the life of the seed bank. However, 2017 had a slightly drier than normal autumn and spring period. By 2018, much of the 2016 seed bank would be ready to germinate, but a drier than average autumn and winter discouraged emergence. Spring was dry, meaning that any new seed produced tended to have low primary dormancy. Similar conditions occurred in 2019, only with even less rainfall. 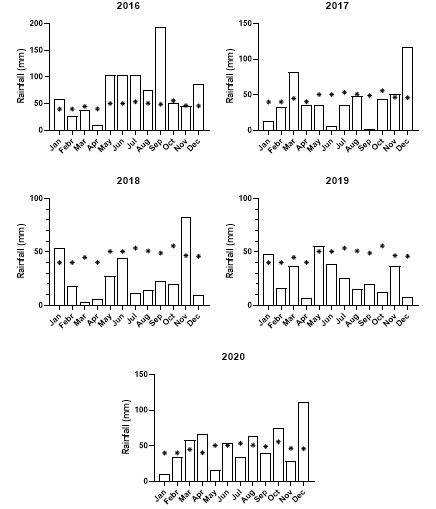 Most of the residual seed bank of annual ryegrass from previous years has been exhausted. This means most of the seed in the seed bank now will be from 2020, which had a more normal rainfall pattern compared to 2018 and 2019 (Figure 4). This means annual ryegrass seed will have its normal level of seed dormancy. The size of the annual ryegrass flush will depend on how much and how early rain falls in autumn, but it should be smaller than in 2020.

Are there any management practices that can change ryegrass emergence patterns?

It has long been known that light burial, an autumn tickle, can encourage annual ryegrass to germinate. However, doing this will have less impact on the dormant part of the annual ryegrass population and will severely compromise pre-emergent herbicide efficacy. Introducing pasture into the cropping system will select for earlier emerging annual ryegrass and shift the population towards lower dormancy. The most practical management change can come from understanding what to do after a drought. This is when there is likely to be a large autumn flush of annual ryegrass, as there will be little dormant seed left in the seed bank. This is the best time to employ a double knock prior to sowing. It is also the time when more effective pre-emergent herbicide strategies should be employed to help deal with the expected large emergence.