Field evaluation over two years has found that the rhizobia strains WSM4643 and WSM1483 produce significant increases in nodulation of the Group E/F host range compared to the current commercial strains, particularly on acidic soils (pHCa 4.6-5.3). Increasing the interval between inoculation and sowing time from 1 to 48 hours where soil moisture conditions are adequate, also showed these strains were superior to other strains evaluated. Herbicide residues continue to be perplexing in terms of predicting their likely impact on legume nodulation which is likely related to the interaction of soil, climatic, host plant and rhizobia factors.

Pulses are an important crop for Australian farming systems as they have the capacity to contribute to building soil nitrogen (N). However, it is not a given that growing pulses will give rise to a net increase in soil N. While pulses are capable of fixing 20-30 kg N/t shoot dry matter, achievement of this is predicated on the formation and maintenance of an effective symbiosis between the host legume and its rhizobia. Many factors such as soil physiochemical conditions and management influences such as the use of herbicides in-crop and in preceding crops can impact the host plant, the rhizobia and/or the symbiosis. Current rhizobia strains for field pea, lentil, vetch and faba bean were isolated from soils where pHCa>7.0. Recent surveys have shown much of the pulse-growing area of central and southern NSW have soil pH well below this threshold (Hackney et al. 2020a). It is known that the current Group E (SU303) and Group F (WSM1455) strains rapidly lose effectiveness where soil pHCa<5.5 (Drew et al. 2014). Current investment by the GRDC and research partners in the Northern, Western and Southern regions are evaluating the potential of recently isolated strains where soil pH is more typical of those encountered in each of the growing regions (i.e. pHCa<5.5). Additionally, studies are investigating the response of these strains to aridity via evaluation across soils with varying texture and/or climatic conditions. Further, the impact of herbicides on legume nodulation is also being evaluated. The remainder of this paper reports on some of the results of the first two years of the project in the Northern region.

First year results have been previously reported for three sites; Griffith, Condobolin and Canowindra (Hackney et al. 2020b). Briefly, first year results found the strains WSM1483 and WSM4643 were generally superior to the current Group E/F strains and exhibited excellent cross-compatibility across all Group E/F hosts. In 2020, new sites were established at Griffith (pHCa 4.6) and Condobolin (pHCa 4.8) with an additional site at Tamworth (pHCa >6.0). At these sites, the current commercial Group F (WSM1455) and two experimental strains (SRDI969 and WSM4643) were used to inoculate field pea and lentil (all sites) and vetch (Griffith and Condobolin only). An uninoculated control was included for all hosts at all sites.

At the most acidic site (Griffith), WSM4643 produced significantly higher nodulation in all hosts compared to all other strains (Figure 1). WSM4643 produced significantly higher nodulation in field pea and lentil at Condobolin and lentil at Tamworth (Figure 1). SRDI969 was superior to all other strains for field pea at the least acidic site (Tamworth; Figure 1). 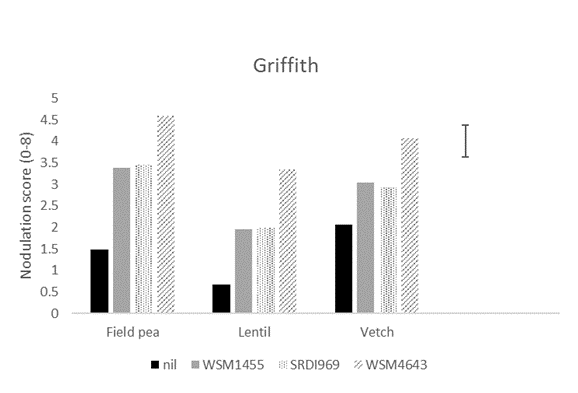 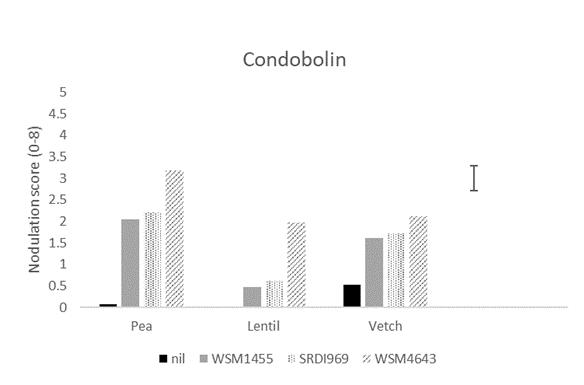 Figure 1. The nodulation score (0-8; adequate =4) for field pea, lentil and vetch at Griffith, and Condobolin and field pea and lentil at Tamworth in 2020 when inoculated prior to sowing with the current Group F (WSM1455) or one of two experimental rhizobia strains. A nil inoculated control was included at all sites. Nodulation assessment was made using the method of Yates et al. (2016).

Time delay between inoculation and sowing

Wet inoculant delivery systems such as peat treated seed or liquid injection deliver high numbers of rhizobia to the soil. However, mortality rates for rhizobia can be very high if soil moisture conditions are inadequate. A row trial was undertaken at Condobolin to determine the impact of time delay since inoculation on nodulation of the host plant (in this case, vetch). Planting of peat treated seed was delayed for 1, 12, 24 or 48 hours following inoculation.  Due to seasonal conditions, soil moisture levels were good at the time of planting.

There was no effect of time delay on nodulation of vetch for individual strains (Figure 2) which is not surprising given the good soil moisture conditions. However, there was an effect of strain alone on the nodulation achieved. Overall, WSM1483 achieved significantly higher nodulation than all other strains while WSM4643 was significantly higher than all remaining strains. These results again continue to build evidence of both WSM1483 and WSM4643 as being strains that can improve nodulation compared to the current Group F (WSM1455) strain in acidic soils.

Given the high soil moisture conditions in the field trials which favoured survival of all strains in 2020, laboratory analysis are underway to determine the impact of time delay on rhizobia survival when applied to glass beads. These data will provide useful information on strain behaviour under conditions that favour desiccation. Figure 2. The effect of delaying sowing by 1, 12, 24 or 48 hours following inoculation with a range of rhizobia strains for vetch compared to an uninoculated (nil) control at Condobolin in 2020.

A key consideration in selecting a possible elite strain for commercial release is capacity to manufacture the strain effectively and have it survive in high numbers until required for use. The current Group E (SU303) strain is difficult to manufacture and thus it is Group F (WSM1455) that is currently used across the Group E/F host plant range. Fortunately, WSM1455 has good cross-compatibility for the Group E/F host range.

A key role of the Australian Inoculant Research Group (AIRG) has been investigation of the manufacturability of the elite strains compared to current Group F strain. To do this, the AIRG group are periodically sampling peat inoculants containing each respective strain over a period of 30 months after manufacture. At four months post manufacture, all strains tested met or exceeded industry standards (≥109 CFU/g).  The 12-month sampling count is about to occur. Ultimately, the information obtained from this study will provide confidence around shelf life when the peats are stored under refrigerated conditions.

Two sites were established in 2019, at Griffith and Canowindra, to determine the impact of herbicide residues on subsequent pulse crop nodulation. Soils differed between the sites. At Griffith, the soil was a light sandy loam with a pHCa of 4.8 (0-10 cm). At Canowindra, the soil was a Dermosol with a pHCa of 5.3 (0-10 cm). In winter 2019 (or post-harvest 2019/20 for summer treatments), the herbicides of interest were applied at typical label rates. Lentil and vetch treated with the current Group F (WSM1455) were sown in May 2020. For all winter-applied treatments, the specific plant-back periods (time and/or moisture requirements) as specified on the product labels were met. The summer application of metsulfuron-methyl would not have met the plant-back period for planting of pulses. However, it was included as recent surveys (Hackney et al. 2021) has found almost 60% of growers were including metsulfuron-methyl in fallow sprays. Therefore, it is important to consider the effect that such usage may have on subsequent pulse nodulation.

The effect of herbicides differed with host plant and site (Figure 3). Generally, lentil achieved a lower nodulation score than vetch and all lentil treatments had a nodulation score well below that considered adequate (≥ 4; Yates et al. 2016). Within lentil, there was little difference between herbicides in terms of damage with the exception of imazamox + imazapyr which was particularly damaging at Canowindra and clopyralid which was more damaging at Griffith.

For vetch, 2,4-D, dicamba + MCPA and diflufenican + MCPA appeared to cause no damage at Canowindra where nodulation scores approaching four were recorded. However, these herbicides were significantly more damaging at Griffith. Metsulfuron-methyl, pyroxsulam + halauxifen, imazamox + imazapyr and clopyralid were all significantly more damaging than the best performing treatments within sites. Clopyralid was especially damaging at Canowindra.

There is a complex interaction between herbicide, soil, rainfall, host plant and rhizobia in terms of the impact of herbicide residues on nodulation. These results are preliminary screenings. Further trials were established in 2020 at Griffith and Condobolin with pulses to be sown into these residues in 2021. More research is required in this area particularly with new mode of action herbicides emerging in the marketplace.

Figure 3. The effect of a range of herbicides applied in 2019 to the nodulation score (based on the system of Yates et al. 2016) of lentil and vetch sown in 2020 at Griffith and Canowindra. (Note: while the nodulation scoring system used covers the range 0-8, a score of 4 is considered adequate. Fixing nitrogen is an energy expensive process and therefore very high scores are not frequently encountered in the field.)

Processing is continuing to determine pulse grain yield from the 2020 harvest. Results from 2019 showed little difference in grain yield of the pulses as a consequence of inoculation with different rhizobia strains. However, drought may have impacted those results. Subsequently, wheat was sown over the 2019 trial sites in 2020. Wheat yields at Griffith did not differ between treatments and samples are undergoing processing from the Condobolin site.

Due to COVID-19, there has been a considerable delay in processing of samples to determine nitrogen fixation. We are expecting these results to be available in late January or early February 2021.

After two years of field trials in this project, it appears that the rhizobia strains WSM4643 and WSM1483 are well adapted to acidic soil conditions in NSW. Both appear to have strong cross compatibility with the entire Group E/F host range and have increased nodulation compared to the current Group E (SU3030) and Group F (WSM1455) strains and have thus far performed adequately in terms of manufacturability. Herbicides and their residues continue to have perplexing impacts on legume nodulation with differences between sites and hosts. The impact of herbicides and their residues on pulse nodulation and nitrogen fixation requires significantly more investigation.

The research undertaken as part of this project (DAN 1901 002 RTX) is made possible by the significant contributions of growers through both trial cooperation and the support of the GRDC, the author would like to thank them for their continued support.