How wide is the distribution of RWA in northern NSW and is sorghum an alternative summer host?

Russian wheat aphid (RWA) - Diuraphis noxia (Kurdjumov) (Homoptera: Aphididae) is a worldwide known pest of cereals. It originates from central Asia, the Middle East and southern Russia and its presence has been confirmed across cereal growing regions in Asia, Europe, Africa, North and South America and, since 2016, in Australia (Kindler & Springer, 1989, Hughes, 1996, Yazdani et al., 2018). The RWA primary hosts are barley, wheat and durum wheat, but it can infect triticale, rye and oats. Its host range also includes winter, and some summer wild grasses.

The RWA is easily distinguishable from other cereal aphids such as the oat aphid (Rhopalosiphum padi), corn aphid (Rhopalosiphum maidis), and rose-grain aphid (Metopolophium dirhodum). RWA is a pale green, spindle-shaped small aphid which is often covered with fine wax. It has dark eyes, antennae shorter than half its body length, almost invisible cornicles and an appendage above the cauda which gives it the appearance of having two tails.

It feeds on plant sap and affects host plants by injecting toxins while probing and feeding. In response, cereal plants start to develop various symptoms including chlorosis, necrosis, wilting, stunting, leaf streaking with whitish, yellow and purple longitudinal leaf markings, and rolled leaves. If probing occurs during the heading growth stage, trapped awns or bleached heads could develop or flowering may not occur.

Wheat and barley can provide a suitable habitat for RWA for a large part of the year. However, wild grasses are also very important for persistence of RWA populations over summer and providing a bridge for the infestation of autumn cereals.

This study was conducted to explore the distribution of RWA in northern NSW and possibility of migration, survival and reproduction on sorghum, the major summer cereal grown in the northern region.

The preliminary RWA field study was conducted on irrigated leased land near the Tamworth Agricultural Institute (TAI), to examine over-summering and reproduction of RWA on the major summer grains in northern NSW: sorghum (Sentinel IG) and millet (var. Jandowae). The experiment was set up in summer 2019/2020 under aphid proof tents, in two repetitions. The first inoculation of RWA on both sorghum and millet was at the 3-leaf growth stage. One plant per tent was inoculated with 10 wingless aphids. The second inoculation was at 5-leaf growth stage.

The 2020 RWA winter grains study was established to analyse the possible migration of aphids from winter to summer cereal (sorghum). Aphid-proof tents were half sown with wheat (Lancer) or barley (Commander). The other half of each tent was sown with sorghum (Sentinel IG) at the end of the 2020 winter season, before the wheat and barley were ready to be harvested. At the tillering growth stage 10 wheat/barley plants in each tent were infested with 10 wingless RWA. The RWA colonisation and distribution on winter, as well as migration onto summer grain hosts were studied till December 2020.

Damage analysis and host preference of RWA was investigated in the TAI glasshouse on barley (Commander), wheat (Lancer), oats (Yiddah, Mannus, Nile), sorghum (Sentinel IG), and triticale (Endeavour). Ten plants of each host were infested with 10 wingless adults. Adults and nymphs counts were observed 2, 7 and 14 days after infestation.

Since the first report of RWA in Australia in 2016 (Yazdani et al., 2018), it has spread rapidly through the eastern grain belt. The data from 2019 showed that Tamworth was the most northern site where RWA has been confirmed in Australia (Figure 1). Out of 21 collected samples in 2019 there were 3 positives in barley, 1 positive in wheat, 1 positive in durum wheat, and 3 positives in barley grass. In a further survey in 2020, 58 cereal and grass samples collected from various sites in Liverpool Plains showed no positives. The RWA population suppression could be explained by the hot dry 2019 summer and the lack of over-summer green bridge. 2019 was Australia's warmest and driest year on record and the dry summer was followed by the coolest and wettest autumn in NSW since 2012 (BOM, 2020 a, b).

A temperature over 20°C is unfavourable for RWA and it cannot survive at temperatures of over 37°C. Furthermore, RWA prefers drier climates, where summer rainfall is 300-400 mm. Heavy rainfall can wash aphids off the upper leaves and 30mm rainfall may cause 50% mortality (Hughes, 1996, GRDC, 2017). 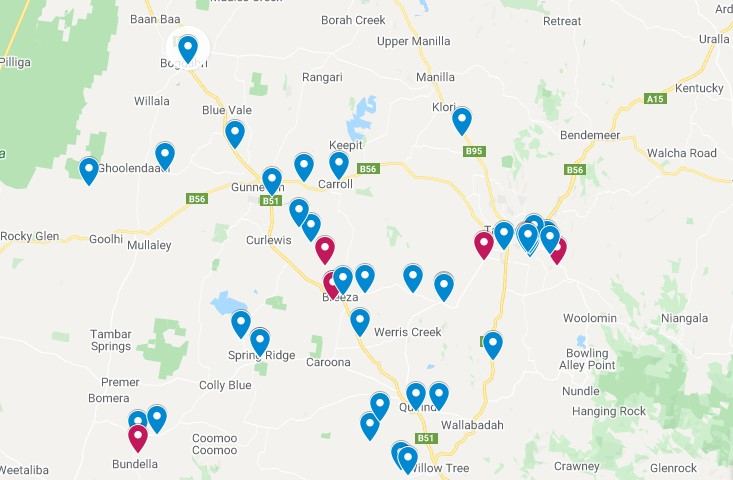 The second inoculation in the preliminary RWA field study in December 2019 was successful for sorghum, but not for millet. The RWA did not manage to establish on millet, and therefore the millet (var. Jandowae) was not found as suitable host plant for RWA.

The aphids were initially observed at the inoculation points of the upper side of the sorghum flag leaf, before migrating to the back side of the leaf, mainly next to the central leaf vein (Figure 2) and starting reproduction. During January 2020, aphids migrated to neighbouring leaves in the lower canopy, likely due to the better protection from high temperatures and a population up to 30 individuals developed on the inoculated tiller. When the sorghum reached the flowering/grain filling stage (end of February 2020), established RWA colonies were observed on 3 neighbouring plants out of the 10 plants inside the tents. Although no symptoms were observed, this result demonstrates that RWA was able to survive on sorghum plants during the 2019/20 summer. Similarly, Harvey and Kofoid (1993) found three sorghum lines which supported RWA for at least a month. Since RWA is typically considered a minor pest of sorghum, there is a possibility that the aphids would have moved to more favourable host plants in an open field study. Figure 2. RWA colony on the back side of sorghum leaf

An established population of 3-10 adults of RWA was noticed on all infested plants six days after inoculation on 12 June 2020. The first symptoms were observed in 1-3 out of 10 infested barley/ wheat plants per tent. The plant response to the RWA toxic secretion was fast and only a few aphids can result in symptoms in less than 7 days. The symptoms were characteristic white to purple stripes, and leaf-rolling on both wheat and barley leaves. At 15 days after infestation, both wingless and winged forms were found in colonies and 5-7 additional plants were infested. One month after infestation 30% of plants showed typical symptoms and 2 months after infestation (6 August 2020) all plants inside the tents were infested with moderate to high populations. During August and September typical symptoms developed in both barley and wheat including rolled leaves, stunted growth, trapped awns, and twisted and distorted heads.

By mid-September 2020, both barley and wheat became unfavourable hosts due to ripening and, since the majority of RWA dispersal occurs by flying (Hughes, 1996), high numbers of winged aphids were noticed inside the tents. After the sorghum emerged on 13 October, the winged aphids migrated from both barley and wheat to the young sorghum plants and started to reproduce. Both winged and wingless aphids and their progeny were observed on the young sorghum plants at the same time (Figure 3a). Symptoms such as red tips on the leaves and patches at the place of feeding (Figure 3b) were observed. Similar to that reported by Harvey and Kofoid (1993), the aphids successfully infested and damaged the susceptible sorghum plants. The aphids first infested the leaf tips and edges, and then moved to the leaf base leaving skins behind. This type of damage could cause plant death in a short time, however, in October 2020 the daily temperatures inside the tent were too hot for RWA development. Temperatures above 40°C were recorded for 2-6 hours in both the morning and early afternoon for most of October, with the highest, 53.15°C, recorded on 21 October. The RWA population on sorghum quickly decreased, as they cannot survive long enough to reproduce at high temperatures. A few surviving individual adults with a small number progeny were observed on sorghum in a couple of tents at the end of October. No aphids were observed in November and the sorghum plants recovered. However, this result indicates that with favourable climatic conditions, RWA could use sorghum as alternate host in late spring, early summer. Figure 3. RWA infestation (a) and damage (b) of young sorghum plant

Symptoms occurred 7 DAI on wheat and barley, but not until later on other host plants. At 14 DAI, both barley and wheat leaves were covered with aphids and their skins, with the symptoms including yellow stripes and leaf rolling. Also, due to the crowding, many winged adults were noticed. The less preferred hosts (oats, sorghum, triticale) showed little or no symptoms. The oat leaves had hardly visible, chlorotic yellow lines with the aphids concentrated on leaf tips, on the upper and back side of the leaf. On triticale, the RWA population remained at the base of the young leaves and inside rolled leaves. Yellow stripes were hardly visible. On sorghum, RWA were usually based on the upper side of the leaf. Red patches developed at the place of feeding on the plants where the RWA became established. Figure 4. Mean numbers of adults and nymphs of Russian wheat aphid (RWA) on different hosts 2, 7 and 14 days after infestation (DAI)

Wheat and barley were found to be the most preferable host for RWA. Compared with wheat and barley, the other studied plants were poor hosts. However, the host range of RWA includes more than 140 species (GRDC, 2017), and there is a great possibility for RWA to maintain its population using these secondary hosts, including oat, triticale and sorghum, during the off-season.

RWA has been found in barley, wheat, durum wheat and barley grass in the Tamworth region in 2019.

Sorghum is the major summer cereal grown in the northern region with an average area sowed of 160,000 ha in northern NSW and 470,000 ha in Queensland. The results from this study show that sorghum can provide a host for RWA, especially on young plants in late spring and at the beginning of summer. However, additional field studies are needed to address its risk to the northern wheat industry.

While RWA forms well-established colonies and typical symptoms on its primary hosts (barley and wheat), the aphid can also maintain small colonies and develop symptoms that include red patches at the place of feeding on sorghum leaves, and hardly visible yellow lines and rolled leaves on oat and triticale.

Harvey TL and Kofoid KD (1993). Reproduction and Survival of the Russian Wheat Aphid (Homoptera: Aphididae) on Sorghum, Journal of the Kansas Entomological Society, 66, 1, 81-85.