Identification of crop-specific and varietal tolerance limits to acidity, salinity and sodicity

Successful dryland crop production in the north-eastern Australia depends on utilising soil moisture accumulated in the period preceding sowing.  Due to the high clay content of the soils in the region, these soils can potentially store 200-250 mm of water in the soil profile or more. However, soil constraints, especially in the subsoil, reduce the effective rooting depth thus also reducing the amount of water and nutrients that plants can obtain from the soil, resulting in reduced crop yield (e.g. Figure 1) (Dang et al. 2006 and 2016).

High sodicity in surface soil and subsoil, high salinity and phytotoxic concentration of chloride (Cl) in the subsoil, alkalinity, subsoil acidity and compaction are common soil constraints in many semi-arid regions worldwide and in particular Queensland and NSW (Figure 2, Table 1). These soil constraints often occur in combination and can interact with each other to create unique environments for root growth at a given location (Nuttall et al. 2003). They may also vary both spatially and temporally. Spatial variation can occur within a field, across the landscape and with depth in the soil profile.

The amelioration of soils affected by constraints is usually expensive, if it is possible at all.  The application of ameliorants (e.g. gypsum for sodicity) can sometimes improve surface soils (Page et al 2020, 2021). However, amelioration of constraints occurring in the subsoil is not usually practical. Where subsoil constraints are present, the selection of crops or varieties tolerant to soil constraints and the identification of traits for pre-selection may provide a long-lasting, tangible solution to improve yields. Crop-specific tolerance limits vary between species and between constraints

Soil salinity refers to the amount of salt dissolved in the soil solution and is quantified by measuring the electrical conductivity of a saturated soil extract (ECe). Lower ECe values are generally more favourable for crop production.

A recent survey of published studies on the tolerance of 17 crop species reported that the tolerance thresholds for soil constraints varied between species and between constraints (Page et al., 2021).  The tolerance levels of different crops for soil salinity were classified using a ‘traffic light’ system (Figure 3).  Salinity levels for which little if any reduction in yield was reported in the literature were classified green.  Levels where some yield loss might be observed (depending on soil type, season and variety) are represented in yellow, while those where loss was reported for most soils, seasons and varieties are represented in red.  For example, the studies indicate that the more tolerant cereals, such as barley and millet, will typically perform well up to salinity levels of ECe 5 ds/m.  However, they usually suffer severe damage at levels above ECe 10 ds/m (Figure 3).  In contrast, more sensitive cereals, such as maize and sorghum, only performed well up ECe 2 ds/m and suffered severe damage at levels greater than ECe 5 ds/m. Some legume species were even more sensitive (Figure 3). 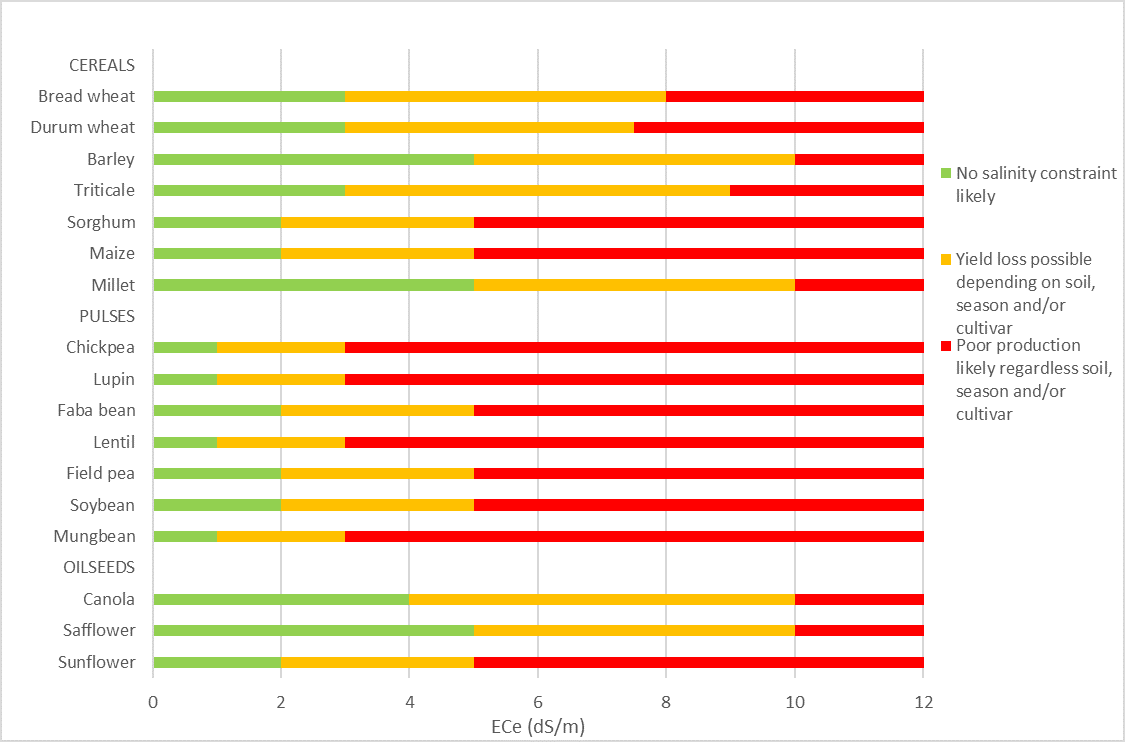 Just as for salinity, the tolerance thresholds of crops varied between the 17 species and between constraints (Page et al., 2021).  However, the ranking of the crops was very different.  Results are represented here in Figure 4, again using the ‘traffic light’ system described above.  For acidity, the cereals sorghum, maize and millet were able to tolerate more severe acidity levels than many other species, with good growth to as low as pH 5.5 and severe yield loss once pH dropped below pH 4.8.  In contrast, the most sensitive cereals were durum and barley, which performed well only down to pH 6.0 and suffered severe yield loss below pH 5.3. Some legume species were also similarly sensitive (Figure 4).

Thus, the crop species most suitable for a particular paddock can vary greatly depending on which are the most prevalent soil constraints.  Crop and cultivar choice are also affected by the season and the variety. 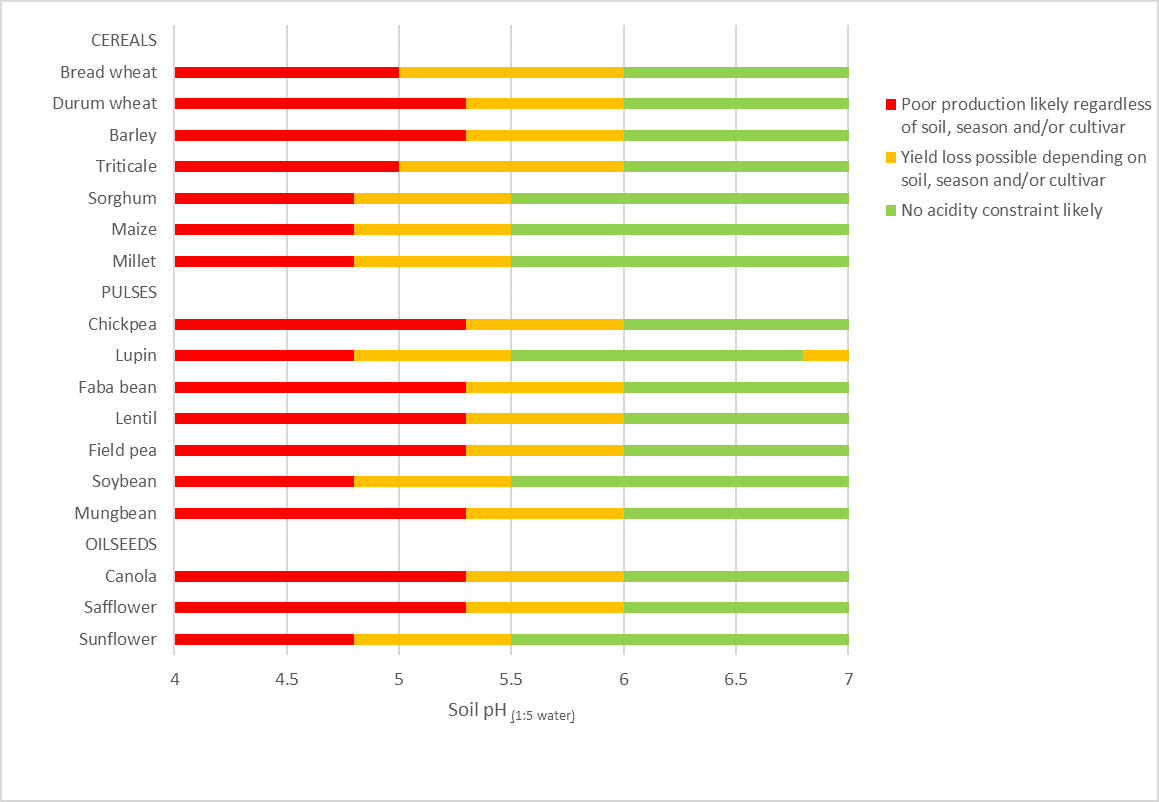 The literature report also indicated that tolerance to soil sodicity varies between species, although there is not currently enough information available to publish ‘traffic light’ boundaries for sodicity. However, it is clear that there are differences in the tolerance of different species and varieties to sodic conditions. Improving our understanding about which are the best species and varieties for areas with sodic soils is an important research priority and will help improve productivity, particularly when sodicity occurs in the subsoil and is difficult to ameliorate.

Tolerance to sodicity varies between cultivars of wheat

As part of a GRDC co-funded project ’Improving wheat productivity on sodic, saline and dispersive soils‘, (UA00159, 2015 to 2020), trials in Queensland were conducted at a highly-sodic site and a less-sodic site in each season to compare tolerance to soil constraints between certain wheat genotypes (Figure 5).

A key aim of this project was to characterise the tolerance to soil constraints of wheat genotypes in all the major Australian cropping regions.  To achieve this, a core set of lines from all over Australia were tested in all regions. A small number of lines from Qld and NSW were included in each season. A comprehensive comparison of current commercial cultivars in each region was not a focus.  However, data on the small number of Qld and NSW cultivars tested do show genotypic differences.

Figure 5. Average and standard errors of soil constraints for the less-sodic and highly sodic sites during 2015-19 experiments.

The effects of soil constraints vary both spatially and temporally complicating attempts to compare genotypes in the field.  Spatial variation in the field occurs both across the landscape and with depth in the soil profile (Figure 5).  High levels of variation at the surface over distances of a few metres are common, particularly after levelling (Figure 6).  There are also complex interactions among the various physio-chemical constraints (Nuttall et al., 2003). These complicated interactions can limit the agronomic and management options. Variability in the impact on the crop growth and yield is compounded by the complex interactions between the physiochemical constraints and environmental factors, particularly the timing and amount of rainfall relative to the crop development cycle. This leads to variation in genotype ranking from season to season and the ability to ascribe differences between genotypes to soil constraints.

To find genetic differences in the presence of high spatial variability, it is necessary to have many plots for each genotype spread across the trial.  During UA00159, 4 replicate plots per genotype were used in most years with 6 replicates in 2020.  This compares to 2 or less replicates per genotype in standard multi-environment genotype trials. The need for such high numbers of replicates limits the number of lines that can be tested each year. We are currently using remote sensing information from drones to determine whether information on canopy cover might be used to compensate for some of the spatial variation in soils to improve detection of genetic difference.

The ability to discriminate between genotypes for tolerance to sodic soils with variable subsoil constraints in field experiments varied greatly in each season during project UA00159 (Figure 7). In 2015 and 2016, higher than average in-crop rainfall meant that plants were less reliant on access to water from the soil.  Thus, rankings in these seasons are less likely to be representative of tolerance to soil constraints.

Conversely, during 2019 when in-crop rainfall was extremely low, the high-constraints trial could not be harvested at all.  In dry years more generally, genotypic differences are usually much harder to differentiate because of very low yield.

In years when in-crop rainfall is near the district average, as in 2017, 2018 and 2020, discrimination between genotypes was much better. Figure 7. Differences between mean yield at a highly sodic site and less sodic site in each season as well as differences in genotype ranking between sites were most evident in years where in-crop rainfall (ICR) and site mean yields were close to the district average.

Genetic differences in tolerance can be found

Despite the challenges discussed above, genetic differences between varieties could be identified particularly in seasons 2017, 2018 and 2020.  In general, the yield ranking of genotypes at the less-sodic site was not a good indicator of the ranking at the highly sodic site.  This indicates that testing on highly sodic soils is likely to be required to identify varieties best for those sites. For example, in 2018 the cultivars Corack, Mitch, Trojan and Mace ranked highly at the non-sodic site, while the wheat genotypes Flanker, Corack, Janz and Sunco ranked highly at the sodic site (Figure 8). However, given the small number of varieties tested to date, it is not yet possible to determine sufficient economic value that would provide useful grower advice on variety choice at this time. Proxy traits are often used in research and breeding where the primary trait, in this case performance on sodic sites, is hard or expensive to measure.  Field validation is always needed; however, proxy traits can sometimes be used to quickly identify genotypes most likely to perform well.  Even if the proxy trait is not highly accurate in identifying the best performing lines, it may be useful to identify the vast bulk of lines that are not likely to be well adapted.  This can reduce the number of lines requiring highly replicated field trials at multiple sites in multiple years.

Potential proxy traits have been identified

Potential proxy traits associated with tolerance to sodic soils with high Cl at depth include lower concentrations of Cl in the youngest mature leaf blades close to flowering as well as higher concentrations of calcium and potassium (Figure 8; Dang et al 2016). 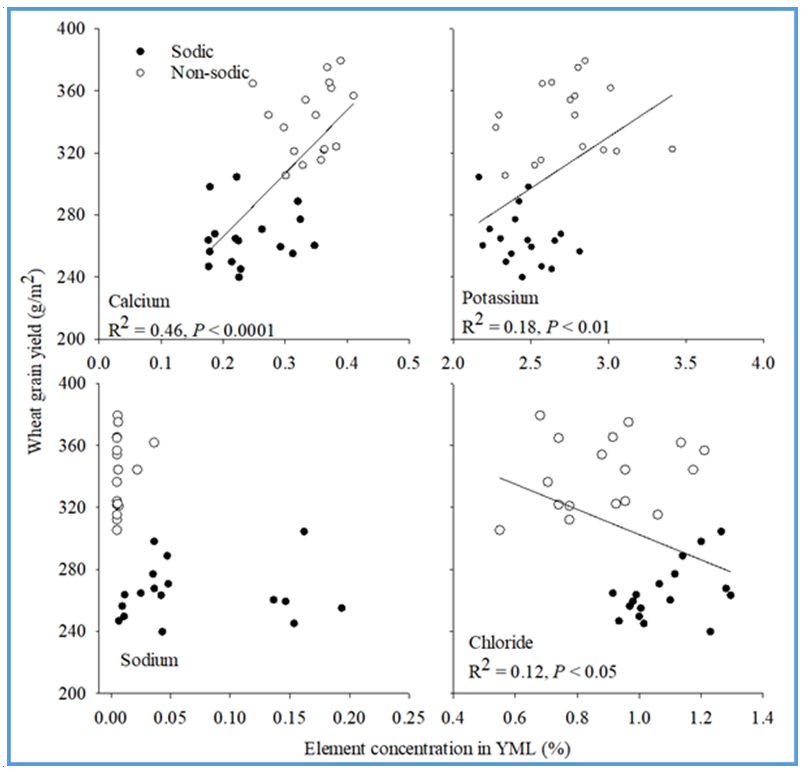 Additionally, a number of traits have been identified as associated with better establishment in the presence of a soil crust (which can often form on sodic topsoils).  These include rapid germination, increased emergence force with greater hypocotyl diameter and narrower root angle (Anzooman et al. 2018, 2019).