Wild oats (Avena fatua L. and Avena sterilis (L.) ludoviciana (Durieu) Nyman) are one of the most economically important weeds within the Northern Grains Region (NGR) (Llewellyn et al., 2016). In the NGR, ~0.6 M ha of cropping land is infested by wild oats that cost growers ~$4.5 M annual revenue loss by sacrificing crop yield (Llewellyn et al., 2016). Wild oats possess a range of survival mechanisms to succeed in the cropping environment, such as variable seed dormancy and a persistent seed bank. In response to changing climatic conditions, where the frequency of hot and dry periods is increasing during the late winter/early spring period (CSIRO, 2011), wild oats plants can mature and shed a majority of their seeds early and before the cereal crop is harvested. These seeds can undergo rapid germination from exposure to cool, wet conditions in the following autumn/winter planting season.

To determine how late season heat and water stress, individually and in combination, affect the growth and reproductive biology of A. sterilis ssp. ludoviciana when applied during the seed development stage – knowledge of which is critical to understand their persistence in NGR cropping systems under changing climatic conditions.

The PAWC of pots was determined by the following equation:

Significant two-way interactions between A. sterilis ssp. ludoviciana biotype and different environmental stressors were observed for all variables studied except for days to maturity (Table 2). Northern NGR biotypes (Biloela 1 and 2) matured in ~97 days, 6 to 8 days earlier than southern biotypes (Jandowae and Toobeah), which matured in ~105 days. However, the stress treatments had a greater impact on driving earlier maturation when compared to the control plants. The HWS treatment had much greater impact on phenology and reproductive biology of A. sterilis ssp. ludoviciana than when each stressor was applied individually. The HWS treatment resulted in plants maturing 19 days earlier than plants grown without any stress, followed by HS (17 days earlier) and WS (9 days earlier). The exposure of plants to different environmental stressors during the seed development stage stimulated plants to complete their life cycle in a much shorter time. Additionally, exposure to the environmental stressors was responsible for plants producing fewer and smaller seeds as compared to the control plants (Table 2). Primary seed production of plants was reduced by 32, 29 and 12% as compared to the control plants from the HWS, HS and WS treatments, respectively. These figures were similar for the secondary seeds, although it was observed that secondary seed production was less than primary seed production in all biotypes (Table 2). Primary and secondary seed sizes were greatly impacted by the stress treatments. Under HWS, seed size was reduced by as much as ~40% as compared to seeds produced by control plants.

Table 2. The effect of heat and soil water stress treatments applied at panicle emergence on the time of plant maturity, the production of filled primary and secondary seeds, and their seed weight for four Avena sterilis ssp. ludoviciana biotypes collected from the NGR. Letters within biotypes indicate significant differences among the stress treatments. Main effect means for all biotypes and stress treatments (in bold text) sharing the same letter do not differ significantly. Values in parenthesis are those when compared to the control. 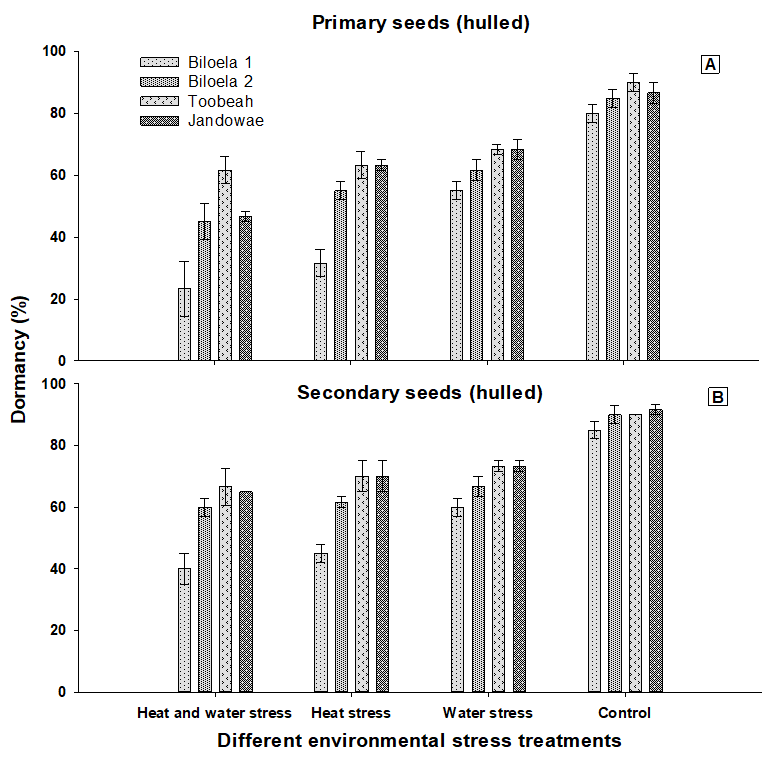 The various heat and water stress treatments imposed in our study showed that wild oats plants grown under these environmental conditions are likely to mature earlier and produce fewer, smaller sized seeds that are less dormant. Given climate change forecasts for the NGR are for hotter and drier growing season, this is likely to impact on the growth, seed production and seed characteristics of wild oat populations in this region. These changes in climatic conditions will, therefore, affect the population dynamics and management strategies of wild oats. For example, hot and dry conditions will shorten the maturity time of wild oats and produce seeds with less dormancy, meaning they can potentially germinate rapidly under suitable conditions at the time of next winter crop planting in no/minimum tillage-based conservation cropping systems. Additionally, early maturity can lead to early shedding of maximum wild oats seeds to the ground before crop harvest, which is a concern in terms of harvest weed seed control. Occasional non-chemical control interventions such as the use of strategic tillage may be useful by burying shattered seeds at greater depth from where they can-not emerge. This may be a useful control tactic given the data indicates that such seeds are less well adapted for long-term survival in the soil seedbank. To assess the impact of the harvest weed seed control technique for controlling wild oats, future research should be conducted on comparing the relative maturity between wild oats and crop types and crop cultivars. To improve control of wild oats and to reduce their impact on crop production, weed management tactics and strategies will need to adapt to the changing environment and changing ecology of these weeds.

Quail PH and Carter OG (1968). Survival and seasonal germination of seeds of Avena fatua and A. ludoviciana.Aust J Agríc Res 19:721-729.