Feathertop Rhodes grass (FTR) and windmill grass (WMG) are increasingly problematic weed species in summer fallows and crops in the northern cropping region of Australia. Both species were considered roadside environmental weeds about two decades ago, but are now also widespread in crop fields. In the northern grain region, FTR has been listed in the top five weeds in terms of causing yield loss and revenue loss (Llewellyn et al. 2016). Both species have developed resistance to glyphosate, a commonly used herbicide in fallows and glyphosate-tolerant cotton. There is a need to develop integrated weed management (IWM) programs to manage these species more effectively. However, knowledge of their biology is a prerequisite for developing sustainable and effective management programs. This paper reviews the biology of FTR and WMG. Where possible, information has been sourced from the northern region. Literature from other regions has also been used. In South Australia, seedling emergence of FTR was highest (76%) for surface seeds (Figure 3). Only 9% of seedlings emerged from seeds buried at 5 cm. Similarly, the highest seedling emergence (67%) of WMG was observed for seeds placed on the soil surface in a Queensland study. The study reported only 9% emergence of WMG from 2 cm and no emergence from 3 cm. 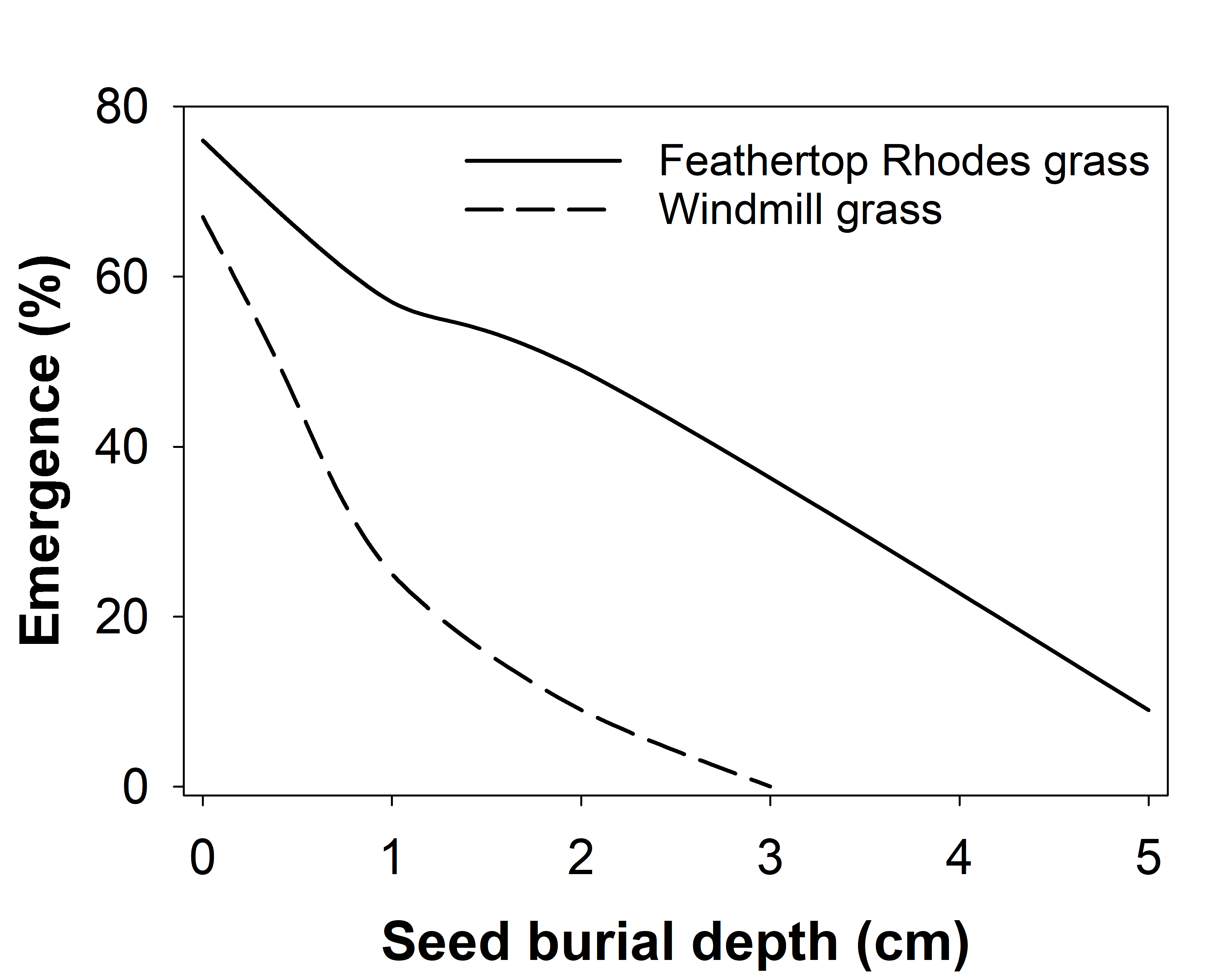 The greatest germination of seeds occurred on the soil surface, suggesting that farming systems that retain most weed seeds on or near the soil surface will promote greater emergence of these weed species. Therefore, tillage operations that bury FTR and WMG seeds below their maximum depth of emergence may be of used as a tool in IWM programs.

Grain yield of mungbean decreased with increasing competition from FTR and WMG; however, the effect was more severe for FTR than WMG at low weed density (Figure 4). Compared with the weed-free yield (1700 kg/ha), 36 plants/m2 of WMG and 11 plants/m2 of FTR reduced mungbean grain yield by 50%. These results suggest that FTR is more competitive than WMG, and timely management of these species is crucial for minimising yield loss. A study conducted in a dryland environment at Gatton evaluated the effect of burial depth and duration on seed persistence of FTR and WMG. The details are provided in a previous GRDC Update paper. FTR and WMG seeds on the soil surface depleted very fast (Figure 6). No seeds were found viable at 12 months after seed placement. Buried seeds of WMG persisted slightly longer than FTR seeds. About 9% and 20% of buried seeds of FTR and WMG, respectively, were viable at 12 months. No buried seeds were viable at 18 months for FTR and 24 months for WMG. As described above, seeds of both species can germinate at a wide range of temperatures, suggesting that good moisture availability in the first few months after seed shedding may result in the germination of most surface seeds. Seed burial through tillage or high soil disturbance sowing operations (e.g., knife points) may increase the persistence of FTR and WMG seeds in the soil. There is limited data on the effect of crop competition on comparative growth and seed production of FTR and WMG. In a recent study, FTR was planted in mungbean at 0, 10, 20, 30 and 40 days after crop planting. The crop was sown in 35 and 70 cm rows at 40 seeds/m2. In general, FTR attained greater plant height in 35 cm rows than in 70 cm rows (Table 1). These results suggest that narrow crop rows may make harvest weed seed control practices more feasible by allowing capture of a greater number of weed seeds. FTR also produced lower biomass in the narrow row spacing in comparison to the wider crop rows (Table 1). Only the first two cohorts of FTR produced seeds, and the seed production was lower in the narrow row spacing. Compared with FTR plants emerging with the crop, the second cohort (i.e., 10 days after mungbean planting) produced only 20-25% of seeds, suggesting the importance of early weed control and the relative dates of weed and crop emergence.

Similar to the mungbean study described above, a field study was conducted to evaluate the growth and seed production of FTR following four transplanting times: 0, 14, 28 and 42 days after sorghum emergence (Mahajan et al. 2020). The crop was planted in 1-m rows. FTR produced the greatest height, biomass and seed production for the plants emerging with the crop (Table 3). Allowing the crop to be weed-free for the first 28 days resulted in a 92% reduction in weed biomass and a 94% reduction in weed seed production when compared with the weed plants emerging with the crop.

These results from different studies demonstrate the importance of crop competition in managing FTR. Planting crops in narrow rows and early weed control could be important components of IWM strategies in summer crops.

Llewellyn RS, Ronning D, Ouzman J, Walker S, Mayfield A and Clarke M (2016) Impact of weeds on Australian grain production: the cost of weeds to Australian grain growers and the adoption of weed management and tillage practices. Report for GRDC. CSIRO, Australia. In., 112.