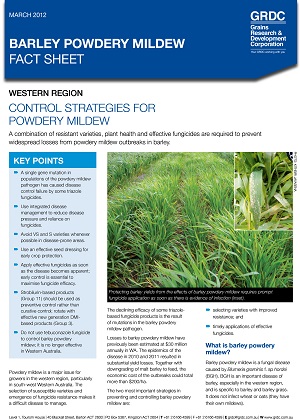 The two most important strategies for powdery mildew

The two most important strategies in preventing and controlling barley powdery mildew are:

Powdery mildew is a major issue for growers in the western region, particularly in south-west Western Australia. The selection of susceptible varieties and
emergence of fungicide resistance makes it a difficult disease to manage.

The declining efficacy of some triazole-based fungicide products is the result of mutations in the barley powdery mildew pathogen.

Losses to barley powdery mildew have previously been estimated at $30 million annually in WA. The epidemics of the disease in 2010 and 2011 resulted in substantial yield losses. Together with downgrading of malt barley to feed, the economic cost of the outbreaks could total more than $200/ha.