Frost is estimated to cost the Australian grains industry over $300 M every year. The GRDC National Frost Initiative conducts RD&E to manage the impact of frost and maximise grower profit. The initiative has three components;

The 2017 season will be remembered for the widespread and frequent frost events across the northern GRDC region.

For a local perspective of the damage to canola, chickpeas and cereals in the northern region as of September 2017 see:

Unfortunately frost was not the only climate concern for grain growers in the northern region in 2017. Although Queensland and northern NSW had a wet October, most of the region experienced rainfall in the lowest decile for the six months April to September. The second half of September was extremely hot. On the 23rd of September, NSW recorded the hottest day since records were kept in 1911 (BoM 2017).

Across the grain growing regions of northern NSW and southern Queensland the mean maximum temperature for the week ending 28th of September was 8 to 12o C above average. Experienced agronomists will point to difficulties in separating the impact of frost from drought and heat on final wheat yield.

Cold temperatures do some damage each year

The severe frost damage experienced in 2017 is a low frequency but high consequence event. It is likely that there are more frequent, but less damaging losses in most years. According to GRDC & WA DIPIRD (2017) cold damage can occur when wheat plants are exposed to temperature less 5°C which can cause spikelet damage if this occurs during pollen development (Z39 -45). From 0°C to -2°C moisture is drawn from the leaves resulting in desiccation damage. The greatest damage is freezing damage which might be expected at 0°C; however 0°C is the melting point of ice not the freezing point of water. Freezing usually occurs at temperatures below -2°C and the damage is caused by ice crystals physically rupturing cell walls and membranes.

An indirect cost comes from strategies to avoid frost

In addition to the direct damage from frost, there is an indirect effect from conservative sowing time /flowering time strategies to avoid frost. This is captured in the statement in the 1970s by the pioneer of frost research at Tamworth, Dr Bill Single, that the fear of frost does more damage than frost itself. Local advisers and growers will have their own views on whether this is still the case but some recent modelling research indicates that this indirect cost is greatest in the northern region. Under the assumptions of the simulation modelling (described in detail in Mushtaq et al. 2017 and Zheng et al. 2015) the greatest benefit of frost tolerance (because of the greatest current damage) is found in the northern grains region and parts of the western region. The northern region also has the greatest indirect impact (shown as difference between each pair of bars). Not only is thinking about the trifecta of frost, heat and water stress important when diagnosing and attributing damage to frost in a year like 2017, this modelling shows that it is essential when managing frost. The importance of radiation, water, frost and heat in identifying the ideal flowering time is supported by extensive modelling for sites between Dubbo and Eyre Peninsula by Flohr et al. 2017. Similar results have been shown for canola (Lilley et al. 2017).

The need for a risk management approach

The interaction of frost with heat and water stress is a good reason for a risk management approach to frost. A further reason is the acknowledgement that frost is not an issue that can be simply solved or removed from grain farms. Rather it is a something that has to be lived with and managed. Frost risk differs for each grain grower; not only does each paddock have a unique physical exposure to frost, each grain business has its’ own financial exposure and the people behind the business have different risk appetites. Under these circumstances, being prescriptive is dangerous.

There are some common features of frost management across grain farms. For example, decisions are different depending on the time of the year. A pre-season planning might be held with an adviser in say January or February, this contrasts to decisions in the immediate lead up to sowing or responses to frost within a growing season. Although there are overlaps, separating the timing and types of decisions provides a useful framework and is consistent with the format of the GRDC Frost Tips and Tactics.

Not only do the decisions occur at different times of the year, there are differences in the type of decisions. Running a farm involves many day to day operational decisions but these are influenced by longer term strategic decisions which set the overall direction of the farm and a series of tactical decisions made each season. One way to distinguish between tactical and strategic decisions is that tactical decisions respond to the state of the system such as stored soil water, time of season break, and potentially a seasonal climate forecast. This framework is used in GRDC business management fact sheets (Making effective business decisions, June 2013, Simple and effective business planning, May 2014).  Unlike larger corporations, in a grain farming business the same person is usually making the strategic and tactical decisions while carrying out many of the day to day operations.

The time lines or planning horizons of operational, tactical and strategic decisions can be matched to weather forecasts for operational decisions, seasonal climate forecasts for tactical decisions and strategic decisions using longer term climate records, including how these are shifting with climate change. In the following section we have matched weather and climate information to the timing and type of decision. This is based on discussion with farmers and advisers and the purpose is to sort weather and climate information by decisions and complement the information in the GRDC NFI Tips and Tactics fact sheet.

Analysis of frosts in the region in 2017

Table 1 shows the minimum temperatures for widespread and damaging frost events on the 20th and 29th of August. Overnight temperatures at ground level or the top of a wheat canopy can be up to 5°C lower than those measured in a Stevenson screen. The offset used in the DSS Wheatman was that head height was 2.2 degrees colder than the Stevenson screen, but differences of up to 10°C have been recorded.

Being located near the centre of a high pressure system provides the stable, descending, dry air required for the clear, calm, night conducive to a rapid temperature fall at dusk and a radiation frost. This raises the question as to why a radiation frost doesn’t occur each time there is a high pressure system. Part of the explanation comes from the synoptic pattern of the previous day providing a southerly flow of air (shown as blue arrows). A fuller understanding of the process comes from examining more levels of the atmosphere than the ground level.

Improving the understanding of atmospheric dynamics behind frost events

A team at CSIRO Hobart, led by James Risbey, set out to better understand the synoptic weather events leading up to and during frosts. An understanding of the synoptic drivers provides a basis for confidence and testing of seasonal forecasting, especially if there are broad-scale patterns in the atmospheric dynamics across the southern hemisphere. In discussion with industry, eight high quality climate stations were selected across the Australian grains belt Merredin, Katanning, Kyancutta, Snowtown, Nhill, Wagga Wagga, Gunnedah, and Miles. The historical record from 1955 to 2014 was used to identify mild (T min < 2), moderate (T min < 0), and severe (T min < -2) frost events in the three month period between 15th August and 15th November.

The left hand panel of Figure 3 shows the backtracking of air in the days prior to medium frosts at Miles. This highlights that even northern sites require the inflow of air from a long way south. Not only is the air cold, because it is descending from the middle of the troposphere, it is very dry. Such extreme southerly origin air trajectories are not associated with most high pressure systems in the region and occur mostly in association with the developing blocking high. The blocking highs develop rapidly and persist and are efficient at drawing in and entrapping the cold, dry air. Similar patterns are shown for other locations in the western and southern regions. 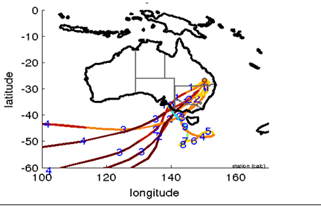 Both the frost events of the 20th and 29th of August involved a front coming through, then a high developing with cold, dry descent trajectories and very cold air mass. These are consistent with the general pattern derived from the 1955 to 2014 data. The late August event was an especially persistent and strong pattern.

The atmosphere flows from west to east sets up what is called a zonal flow which follows the latitudinal lines. The contrast is meridional flow along longitudinal lines. Widespread frosts require meridional flow, that is the interaction of the front and high pressure systems enhance the southern transport of cold dry air. The answer to why each high pressure system is not accompanied by a frost lies in the fact that most high pressure systems are relatively shallow circulation features and do not have the deeper vertical organisation required to entrain very cold, dry air from higher latitudes. The developing blocking high system associated with frost has the appropriate vertical structure to provide cold, dry entrainment. Blocking highs are much rarer at a given location, and thus frost is a relatively rare event.

Research in this project has also shown the importance of synoptic patterns that set up meridional flow to bring hot northern air for spring heat events. The encouraging aspect of the research is that these patterns are not only show consistent synoptic patterns over cropping regions, there is also a strong pattern in the broad-scale southern hemisphere circulation.

There is much more climate research on heat and drought than spring frost events. This is not surprising given the enormous interest in heat events due to the direct impact on human health and safety, infrastructure, bushfires and demand for electricity. Likewise drought has always attracted research due to the widespread impact on agriculture but also ecology and increasingly, on urban water supplies. In contrast, spring frosts are only really of concern to grain farmers and horticulturists. This not only applies to the climatology, as there is better understanding on the impact of heat and drought on wheat than post head emergence frost.

Although freezing temperatures are an issue for wheat growth in many parts of the world, most of the literature on spring frosts or post head emergence frost damage comes from Australia and South America. The GRDC National Frost Initiative is guided by growers and agronomists and will continue to provide updates on findings as it builds on previous research, much of it from the northern region.

The research undertaken as part of the project “Assessing forecast and management options for mitigating extreme temperature impacts on grains CMA00002” is made possible by the significant contributions of growers through the support of the GRDC. The authors would like to thank them for their continued support. The guidance and encouragement of John Shepherd is especially acknowledged. PTH and DST time is also supported through a project funded by GRDC and the Commonwealth Government’s R&D for Profit Program “Forewarned is forearmed - equipping farmers and agricultural value chains to proactively manage the impacts of climate extremes.”