Today’s tillage and crop systems have evolved dramatically since the first settlers. Not knowing the environment and being short of food, James Ruse was set the task of growing crops near Parramatta after it was found that the soils near Sydney Cove were not suited to cropping. Ruse’s first attempts at cropping found that corn was the best bet. As cropping expanded across south eastern Australia, cropping systems were strongly influenced by experience from England and Europe. These systems, based on frequent tillage and clean fallows were found to be wanting, especially in the northern cropping regions. Contour banks were the mainstay of soil erosion control, yet erosion remained an issue.

Hector Tod (1969) was one of the early farmers to explore tillage and planting equipment to handle higher stubble loads while machinery evaluation programs were initiated in Queensland (Ward Norris 1976) in the mid 1970’s. These programs involved importing equipment from Canada and the USA and testing them with interested farmers and provided training on appropriate set-ups for this equipment. Roundup® was released in Australia in 1974 being the first broad spectrum herbicide that made weed control feasible in prospective no-till fallows. But it cost $20/L and we used to use 1-2L/ha in 1976!

A long standing agronomy research effort was initiated by Marley and Littler (1989) in 1968 comparing water and nitrogen relations associated with tillage and stubble. This was visionary in that stubble burning and disc tillage were the norm. In the spirit of development the land, the Queensland Government set up a catchment study in 1965 to better understand the influence of land clearing on farm water supply. After a calibration period of 17 years, two catchments were cleared with one cropped and one to pasture. These two sites remain active and demonstrate vision and commitment after 50 years.

In the mid 1970’s there was conflicting advice coming from government extension agencies: on one hand farmers were being told to burn or bury stubble to reduce diseases and facilitate tillage and planting, while the soil conservation fraternity were indicating retention of stubble even though tillage and planting machinery was not well suited. This set the scene for a grand era of research, development and extension across the fields of agronomy, soil science and hydrology (Figure 1).

There were >12 major agronomy research sites with detailed replicated plots looking at interactions between crop yield, water storage, nutrition and disease. Eight catchment studies was initiated to explore the impact of soil and fallow management on runoff and erosion, while there were numerous on-farm demonstrations and machinery development activities. Herbicide and local machinery manufacturing companies were actively involved in all elements of these studies. This extensive investment in the exploration of conservation tillage forms a foundation for the cropping systems of today. This paper aims to provide an overview of this effort with a sample of results – it is not comprehensive and will demonstrate a Queensland bias, naturally! 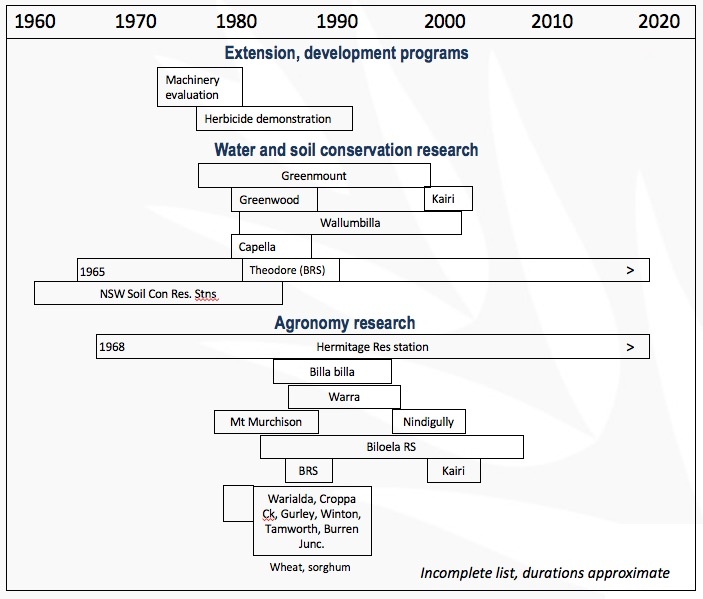 Why is fallow management so important?

Figure 2 shows the dependence of winter crops on starting soil water. For example, 20% of the water supply of a crop at Greenethorpe comes from water in the soil at planting. This value increases to 60% for a winter crop at Dalby. All other things being equal, it’s hard to see how better water capture cannot improve productivity and profit.

Catastrophic erosion after our typically sharp summer storms also highlighted the need for a better system to keep soil in place so it can store water for another day! 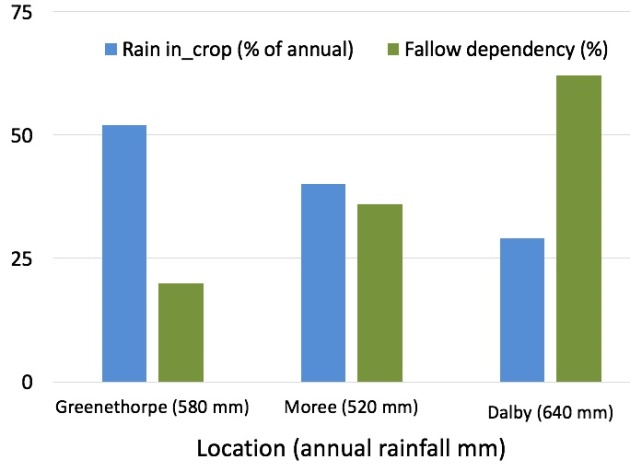 Figure 2. Percentage of in-crop rainfall and “fallow dependency” (the proportion of the crops water supply derived from soil water at planting) for three locations.

The following figures and table provide a snapshot from some key research studies.

Figure 3 shows average fallow efficiency values for four tillage treatments at the long term trial near Warwick, with an extra 9% of rainfall captured when stubble is retained and not cultivated. Similarly, starting soil water over 3 years at three sites in northern NSW was 30mm higher in no till with stubble compared to tilled and stubble burnt (Figure 4). Given the “safe” nature of stored soil water, an extra 30mm could be worth as much as 100mm of extra in-season rainfall.

In both these studies, wheat yields did not reflect these gains in starting soil water. Figure 4 provides some of the evidence for this lack of achievement – lower soil nitrate and lower protein. Additionally, higher root and leaf disease and nematode levels were observed in all stubble and reduce tillage plots. This result is consistent across eastern Australia, and more so in southern Australia where negative yield responses to stubble are common in research studies (Scott et al 2010). 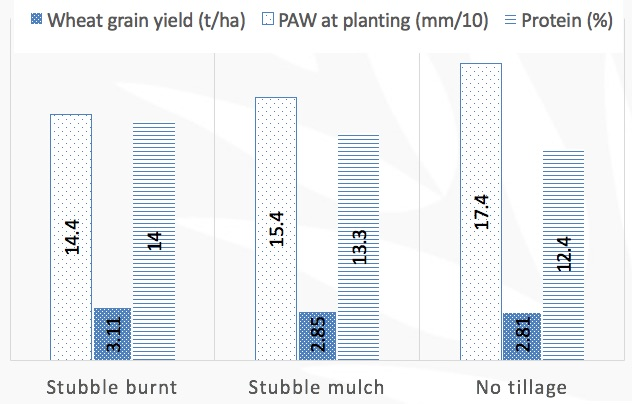 In contrast Holland and Felton (1989) found that when sorghum was sown into no-till cereal stubble, yields were 0.7-1.8 t/ha greater compared with cultivated, stubble retained fallows (Graeme Schwenke pers. comm.). Apparently sorghum did not have to deal with the disease load of its disease unrelated wheat and could use the extra 31mm of stored water.

One of the more interesting results from these many studies comes from Central Queensland where Radford and Thornton (2011) found that a yield penalty associated with aggressive tillage lasted 3 years after a no-till regime was implemented over the whole trial (Table 1). It is notable that there are no yield differences between the three “stubble retained” treatments and that crop type was varied depending on planting opportunities. They proposed that the lingering yield penalty was due to disease and nutrition.

Table 1. Average grain yield (t/ha) over 20 years for four fallow management options and yield when all plots were managed for the subsequent 3 years (Radford and Thornton, 2011).

Controlled traffic is an evolving practice to improve efficiency, timeliness and improved soil conditions leading to better yields. Tullberg et al. found large differences in water capture and grain yields at Gatton (Li et al. 2007) with compaction associated with wheeling having a larger impact on infiltration than soil cover (Figure 5). This encouraging result may well be being replicated across the grain belt as the package appears to offer other advantages.

One point of conflict has arisen associated with controlled traffic – the direction of travel. Should the preference be to cross the slope, similar to cultivating between contour banks, or down the slope? While this debate will continue, my summary at the moment is that if good stubble cover is maintained, then direction is not important, and if there is little soil protection, it is also of little interest as we can expect the worst regardless, when a big rainfall occurs, which it will. 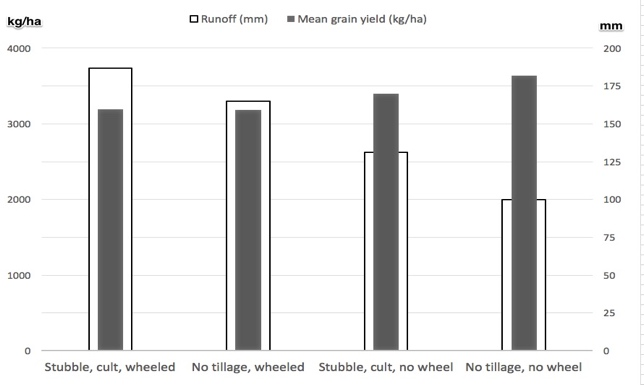 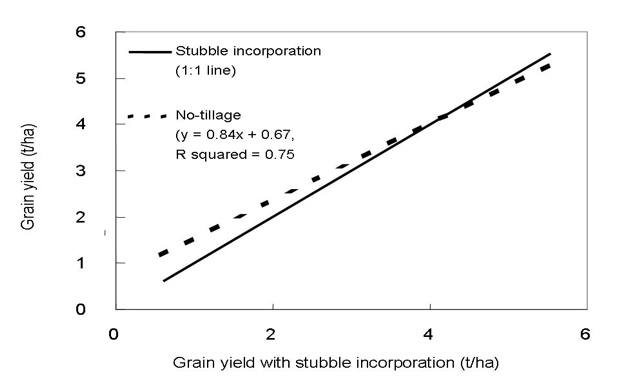 Agriculture, like most industries has its fads and its believers in one system or another. There was a belief that no-till systems created cumulative benefits that would be lost from tillage. Dang et al (2017) concluded that the impacts of an occasional “strategic tillage” did not have any lasting negative impacts and on balance was a useful strategy to deal with some aspects of not cultivating for long durations.

Figure 7 lists the positive and negative drivers of reduce tillage and stubble systems. Clearly, farmers have sorted through many of these issues and appear to be implementing conservation tillage systems with better results than most research trials. Well of course, they are professional farmers. 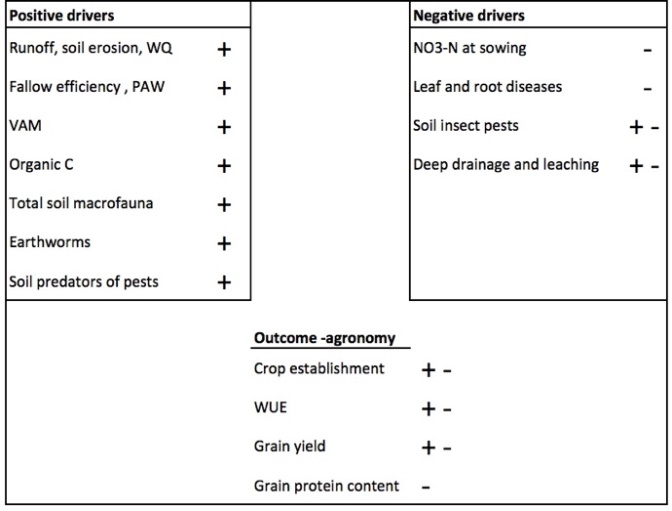 Freebairn DM, Wockner GH. 1986. A study of soil erosion on vertisols of the eastern Darling Downs, Queensland. I The effect of surface conditions on soil movement within contour bay catchments. Australian Journal of Soil Research 24:135–158.

Radford BJ, Thornton C. 2011. Effects of 27 years of reduced tillage practices on soil properties and crop performance in the semi-arid subtropics of Australia. International Journal of Energy, Environment and Economics, 19:565-588

Improved soil and crop systems in the northern regions are the result of 50 years of diligent innovation and exploration by farmers, agronomists, soil scientists, agricultural engineers, chemical and machinery companies.