PREDICTA®B update and new tests for 2018

There are a range of soil-borne diseases, which collectively are estimated to cost grain growers over $370 million each year (Murray and Brennan 2009). The most important soil-borne diseases in the northern region are: crown rot and root lesion nematodes (for 2017 distribution maps see: Molecular diagnostics Predicta B).

Strategies to minimise yield losses caused by soil-borne diseases must be implemented before sowing. Knowing which soil-borne disease poses the greatest risk to the planned crop is vital for the development of effective management strategies. PREDICTA®B provides growers and consultants with this crucial information.

In the past 4.5 years four national projects (DAN00175, DAV00128, DAQ00186 and DAS00137) have collaborated to improve the value of PREDICTA®B in identifying the regional risks from different soil-borne diseases and developed improved management options to control crown rot and root lesion nematodes (Pratylenchus species). Other projects (e.g. BWD000025 and DAW00245) have also contributed to improved understanding of soil-borne disease distribution and incidence.

A root disease survey of paddocks monitored by the GRDC National Paddock Survey (NPS) project BWD000025 revealed widespread moderate levels of root disease in cereal crops across Australia. Root disease ratings varied between seasons and districts (Figures 1 and 2). In general, each 0.5 unit increase in root disease score above a base of 0.5 units can reduce yield by 10%. This means average yield losses caused by soil-borne diseases in the northern region could exceed 20% per annum.

The 2015 season in the northern region was characterised by little rainfall in spring and hot grain-fill temperatures, by contrast 2016 generally had above average rainfall and minimal moisture stress during grain fill. Root health was generally poorer in 2016 in comparison to 2015, as evidenced by an increase in the root disease score. 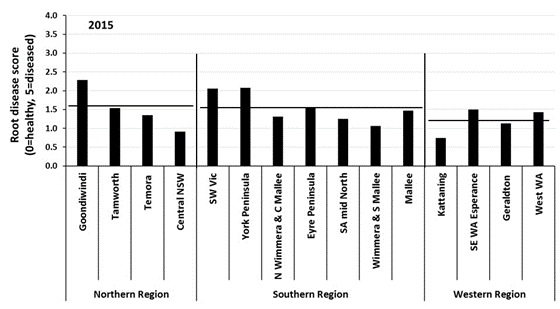 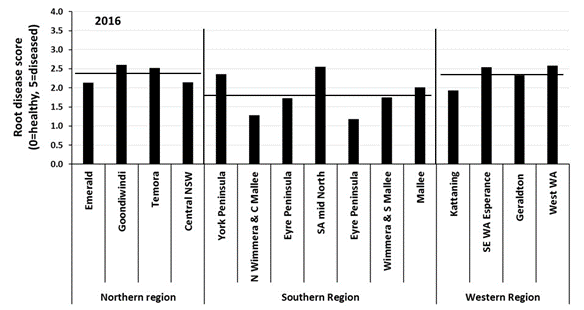 Studies undertaken in collaboration with National Variety Trial (NVT) and NPS projects, showed that avoiding stubble when collecting PREDICTA®B samples led to a significant under estimation (failure to warn) of the risk of crown rot. This can be fixed by adding two 5 cm pieces of stubble from the base of the previous winter cereal or grass weed plants (one to several years old) from the 15 different locations where soil cores are collected. Adding stubble in this way also facilitates testing for other stubble-borne pathogens (e.g. yellow leaf spot in wheat).

When developing a management program for root lesion nematodes, it is important to know which species are present within individual paddocks, as each can have a different host range including differential effects on varieties.

A national survey of root lesion nematodes conducted by DAS00137 and DAV00128 confirmed that the PREDICTA®B tests for P. neglectus, P. thornei, P. quasitereoides and P. penetrans are reliable. Therefore, PREDICTA®B can be used with confidence to determine which of the main root lesion nematode species are present in a paddock, plus the level of each species, before crops are sown. The research confirmed that as a general rule P. thornei is the main species on the higher clay content black/grey soils in the north while P. neglectus tends to become the dominant species around central NSW and further south on lower clay content red/brown soils.

Work also undertaken by DAV00128 and DAW00245 indicates that the current PREDICTA®B regional yield loss risk categories are appropriate, though this work is continuing.

There is growing evidence that the impact of soil-borne diseases is greater when they occur in combination. In a field trial conducted by Northern Grower Alliance near Macalister in 2015, yield loss across six wheat varieties was greater when crown rot and P. thornei occur together (Figure 3). 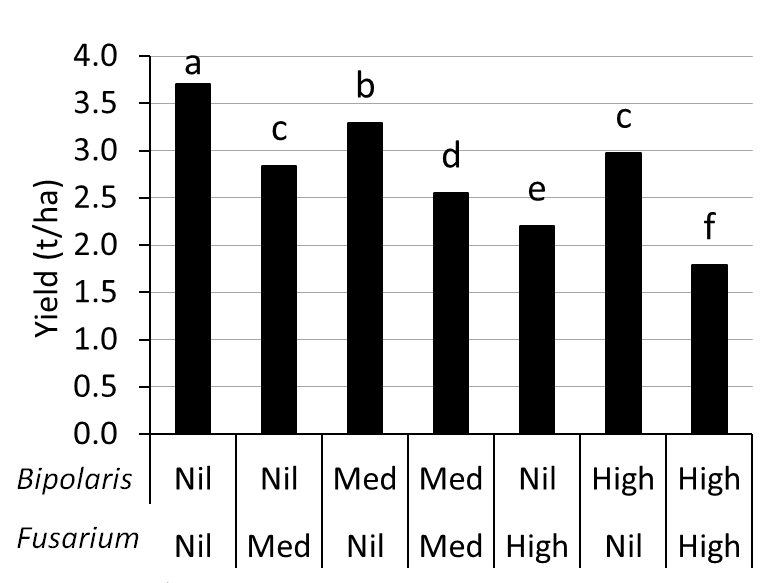 PREDICTA®B is under continual development to provide a comprehensive assessment of the levels of soil and stubble-borne pathogens that pose a potential risk to cereals and increasingly, pulse and oilseed crops. The aim is to provide a fast and cost-effective way for growers to determine the soil- and stubble-borne disease risks within a paddock, to help inform decisions of crop and variety choice and guide management to minimise losses.

To fast track delivery of new tests, these results are reported with categories based on population density so growers and consultants can benchmark levels of pathogen DNA detected in paddocks against the rest of industry. When the relationship between the initial pathogen level and disease has been defined, the level detected in the sample is reported with a disease risk rating.

In 2018, in the northern region results of new tests for ascochyta blight and phytophthora root rot of chickpea, yellow leaf spot and white grain disorder of wheat, fusarium stalk rot of sorghum and charcoal rot will be reported in the ‘tests under evaluation’ section on PREDICTA®B reports along with combined levels of two arbuscular mycorrhizal fungi (AMF).

Ascochyta blight is a serious disease of chickpea that can severely reduce yields in all Australian chickpea regions (except the Ord, where has not yet been detected) region. The PREDICTA®B results can be used to rank paddocks based on inoculum levels and monitor decline after the previous chickpea crop. However, any detection of this pathogen by PREDICTA®B should be considered as significant and it is recommended that chickpeas are grown only in paddocks in which the pathogen is below the detection limit and industry best practice is adopted to manage the risk of ascochyta blight: Chickpea: ascochyta blight management.

If chickpea stubble is in the paddock, then in addition to adding cereal stubble, add one small piece (5 cm) of chickpea stubble from each of the 15 sampling locations to the PREDICTA®B soil sample. Remember, the Ascochyta pathogen can be introduced into a paddock after PREDICTA®B sampling through surface water flows, wind, machinery and/or animals moving infected residues.

Phytophthora root rot (PRR) caused by Phytophthora medicaginis (Pm) is a serious pathogen of chickpeas that is widespread in the Northern Region. Under conducive conditions, PRR can cause 100% loss. Pm survives between seasons on volunteer chickpeas, lucerne, medics, sulla and as resting structures (oospores) in roots and soil. PREDICTA®B has developed a test for Pm. However, field research has shown that the test cannot reliably detect very low levels of Pm that can still pose significant disease risk (see additional Bithell et al.paper in this update). Pm survives at very low concentrations and in isolated patches within a paddock that cannot be reliably detected by soil sampling/testing. Pm multiplication can be explosive when conditions create free soil water, it can also spread in water moving across paddocks. So it is unlikely a pre-sowing test can reliably identify low risk paddocks.

However, if PREDICTA®B detects any level of Pm within a paddock then it should be treated as a high risk of developing PRR if conditions are conducive to infection throughout the season. Unfortunately, due to the dynamics of Pm inoculum, not detecting Pm using PREDICTA®B does not mean that the PRR is necessarily low. The Pm test may have more value as an in-crop diagnostic tool to distinguish between PRR and waterlogging in chickpea crops in wet seasons.

Yellow leaf spot is a stubble-borne disease of wheat. PREDICTA®B test results can be used to rank paddocks based on the levels of inoculum (including determining if there has been post-harvest saprophytic colonisation of cereal stubble in wet summers), monitor inoculum decline during different phases of the cropping sequence and confirm disease diagnosis.

Field research undertaken by AgVic and DPIRD in Victoria and Western Australia show there is a good correlation between DNA levels detected presowing and early leaf disease development (i.e. primary infection) in the crop (Figure 6) showing the potential for PREDICTA®B to assist with paddock selection. However, in wet seasons, secondary infection from conidia produced on leaf lesions lower in the canopy become the main source of continued disease development later in the season hence the relationship with pre-sowing DNA levels weakens. Secondary infections in wet seasons are likely to cause more severe disease development that may require spraying.

Growers should consider not sowing high risk paddocks to wheat, but if wheat is to be sown plant the most resistant varieties in the paddock with highest risk of initial infection. White grain disorder occurs sporadically in the northern region, especially in southern Qld but it remains unclear if the disease warrants an active management program. It causes symptoms in grain that can lead to downgrading or rejection of affected wheat loads at receival sites.

Charcoal rot, caused by Macrophomina phaseolina, affects more than 400 plant species and is a serious disease of summer crops including sorghum, soybean, mungbean and sunflower in the northern region.

PREDICTA®B recently developed DNA tests for determining the levels of two AMF groups plus provisional disease risk categories within paddocks which could be a useful tool for identifying paddocks at risk of long fallow disorder to allow growers to alter rotations to a less AMF dependent crop and/or attempt to ameliorate with addition nutritional inputs. However, research has found that even excessive rates of P application cannot fully overcome the effects of low AMF levels. Further information is available at Soil quality: Arbuscular Mycorrhizas SA. 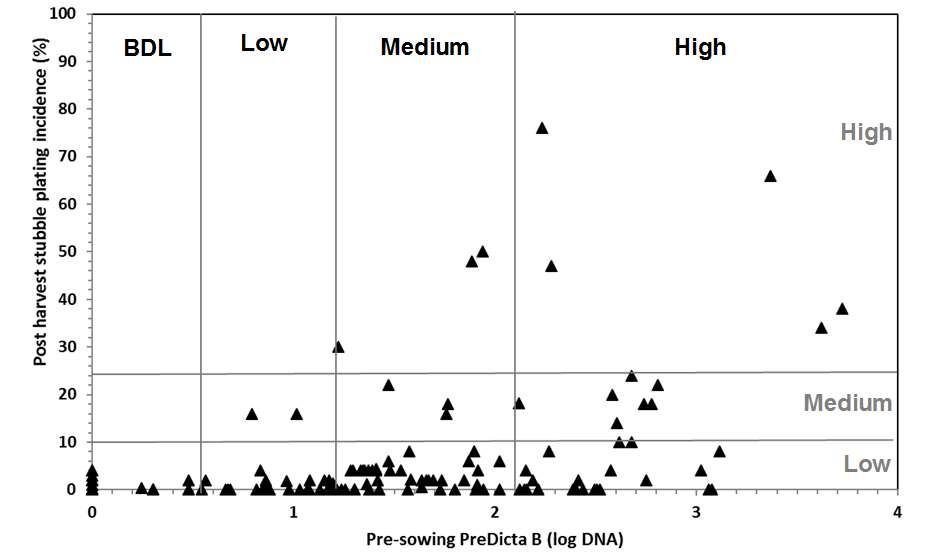 SARDI is currently working on developing tests for sclerotinia, clubroot in canola and Botrytis cinerea (which causes grey mould and Botrytis seedling disease of lentil and chickpea). Additionally, the team is working on tests for Diaporthe species, in collaboration with USQ, which cause stem canker in sunflower and other crops and will shortly commence work on developing a test for one of the mites that affect crop establishment.

GroundCover: Correct sampling 'a must' to accurately expose disease risk

The research undertaken as part of these projects is made possible by the significant contributions of growers through both trial cooperation and the support of the GRDC, the authors would like to thank them for their continued support. Technical assistance provided by Robyn Shapland, Finn Fensbo, Patrick Mortell, Kay Warren, Karen Cassin, Paul Nash (all NSW DPI) for sowing, maintaining and harvesting trials is greatly appreciated.