EGA Wedgetail has been widely grown in central NSW and supported grower farming systems where they have included grazing and grain varieties. EGA Wedgetail was released in 2002 and has been affected by changes in stripe rust ratings, has lower grain quality compared with the some of the more currently grown milling varieties, and its delivery classification in the northern zone is only Australian Hard (AH), compared with Australian Prime Hard (APH) in the south-eastern zone.

While stripe rust can be economically controlled with fungicides, it adds an extra complication when using the variety for grazing and is seen as a disadvantage for growers. With EGA Wedgetail’swinter habit and slower maturity, it doesn’t fit well in all the growing areas in central NSW, so both yield and grain quality are affected when spring conditions are drier, or the season finishes quickly. The shift from APH to AH in the northern zone has meant growers in the central region cannot take advantage of premiums for APH in years where they achieve high grain protein levels.

In the last 5–10 years, increased emphasis has been placed by breeding programs on dual-purpose types that suit both grazing and grain recovery. New varieties released in the last five years now provide growers with more choice and overcome some of the shortfalls in EGA Wedgetail. The releases have been both companion varieties offering different maturities and growing season length; Longsword and DS Bennett and also more direct replacements for EGA Wedgetail; LRPB Kittyhawk and Illabo.

A series of experiments run over the past five years looked at the performance of dual-purpose varieties for both dry matter production and grain recovery (DAN00184); as well as separate time of sowing response and plant physiology experiments in the last two years (DAN00213) to better describe varieties and identify regions in NSW where they are best suited.

The grazing and grain recovery experiments were run across the state, with key in-crop management decisions based around EGA Wedgetail, the current industry benchmark. When comparing varieties, this needs to be considered, as it influences how results are interpreted.

The grazing cereal experiments were sown from the last week of March through to early May, depending on the seasonal break. Key measurements recorded at all sites included dry matter (DM) production through the season at mid tillering and then before stem elongation i.e. growth stage (GS)31 on the Zadoks scale (Zadoks et al. 1974). The experiments were then grazed by livestock following DM measurement and allowed to recover for either further DM assessment, or carried through to grain production.

The trials were conducted based on randomized complete block design, with column and row arrangement. Linear mixed model approach was used to analyse the data. All the analyses were performed using ASReml-R 3 (Butler et al., 2009), considering spatial variations in the model, where needed (Gilmour, et al., 1999).

The results presented in figures 2, 3 and 4 are from Multi-Environment Trials (MET) analysis using one-stage factor analytic method (FA) of Smith et al. (2015), showing values for single site years and across years and sites for NSW from 2011–2017. 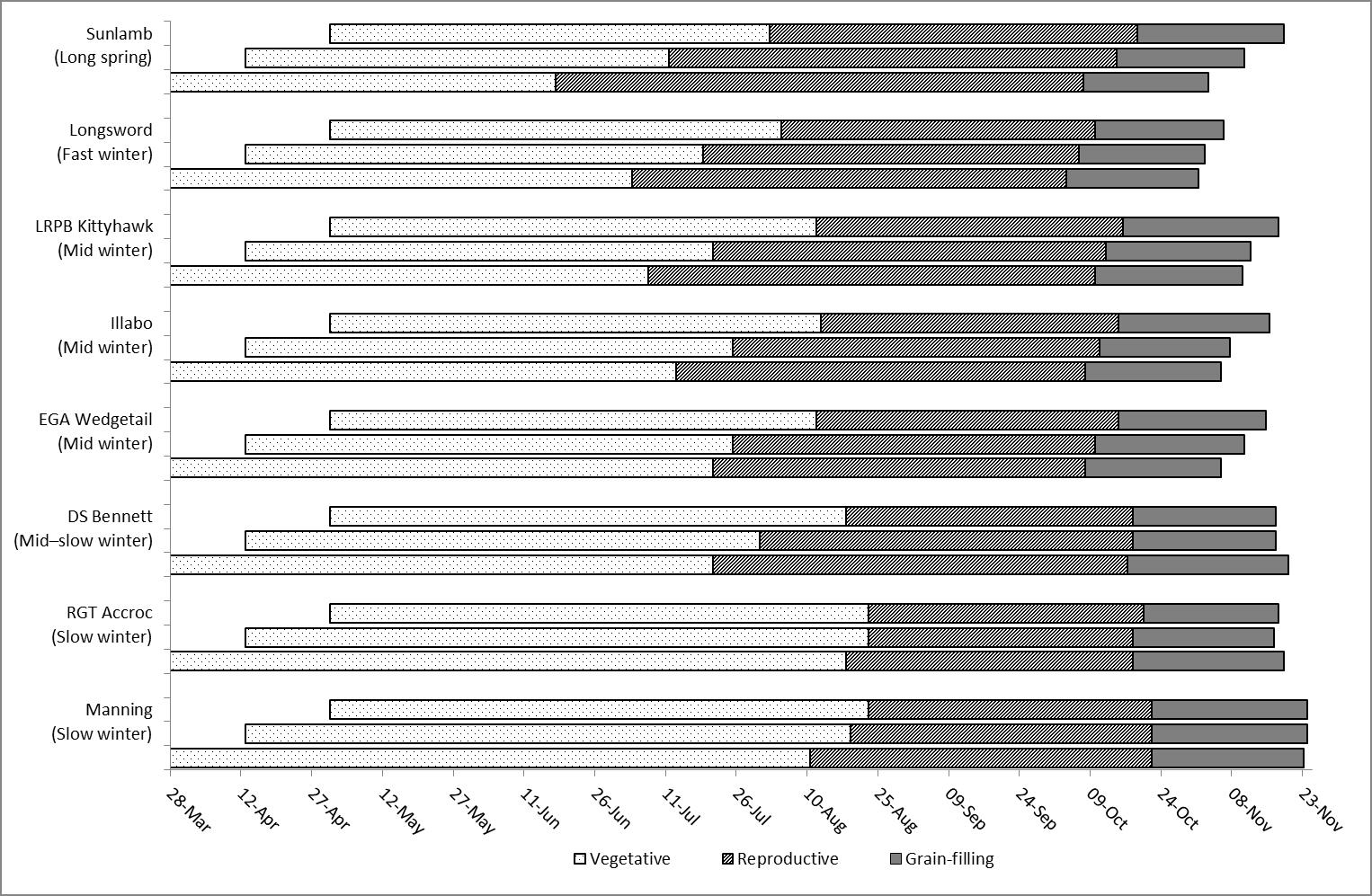 The performance of new wheat varieties compared with EGA Wedgetail is shown in figures 2, 3 and 4.

Recently released and evaluated lines include (see Table 1 for summary):

^ Wheat quality classification based on latest information in January 2019; some new varieties might have updated classifications pending reviews by Wheat Quality Australia for the coming season. 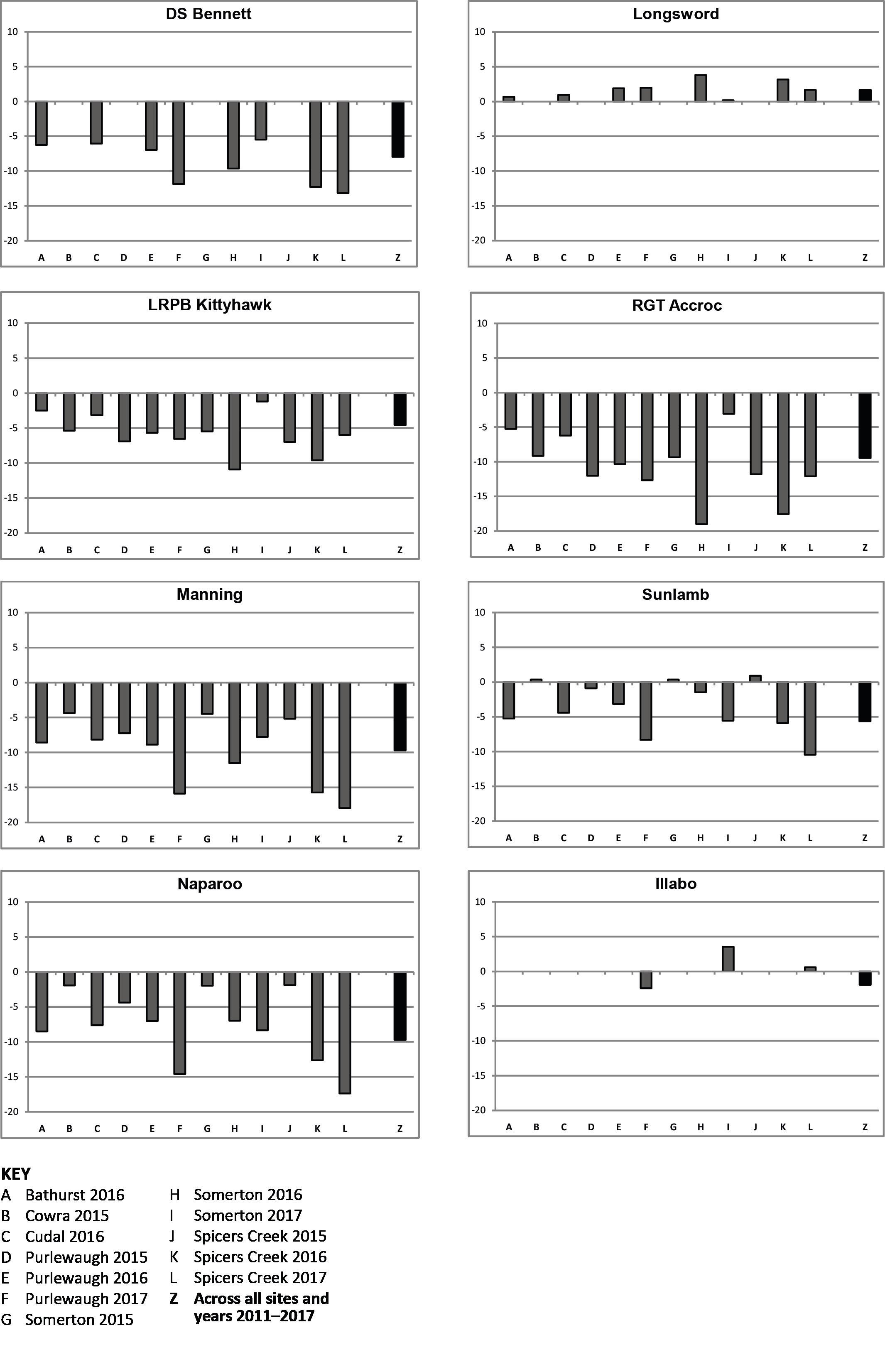 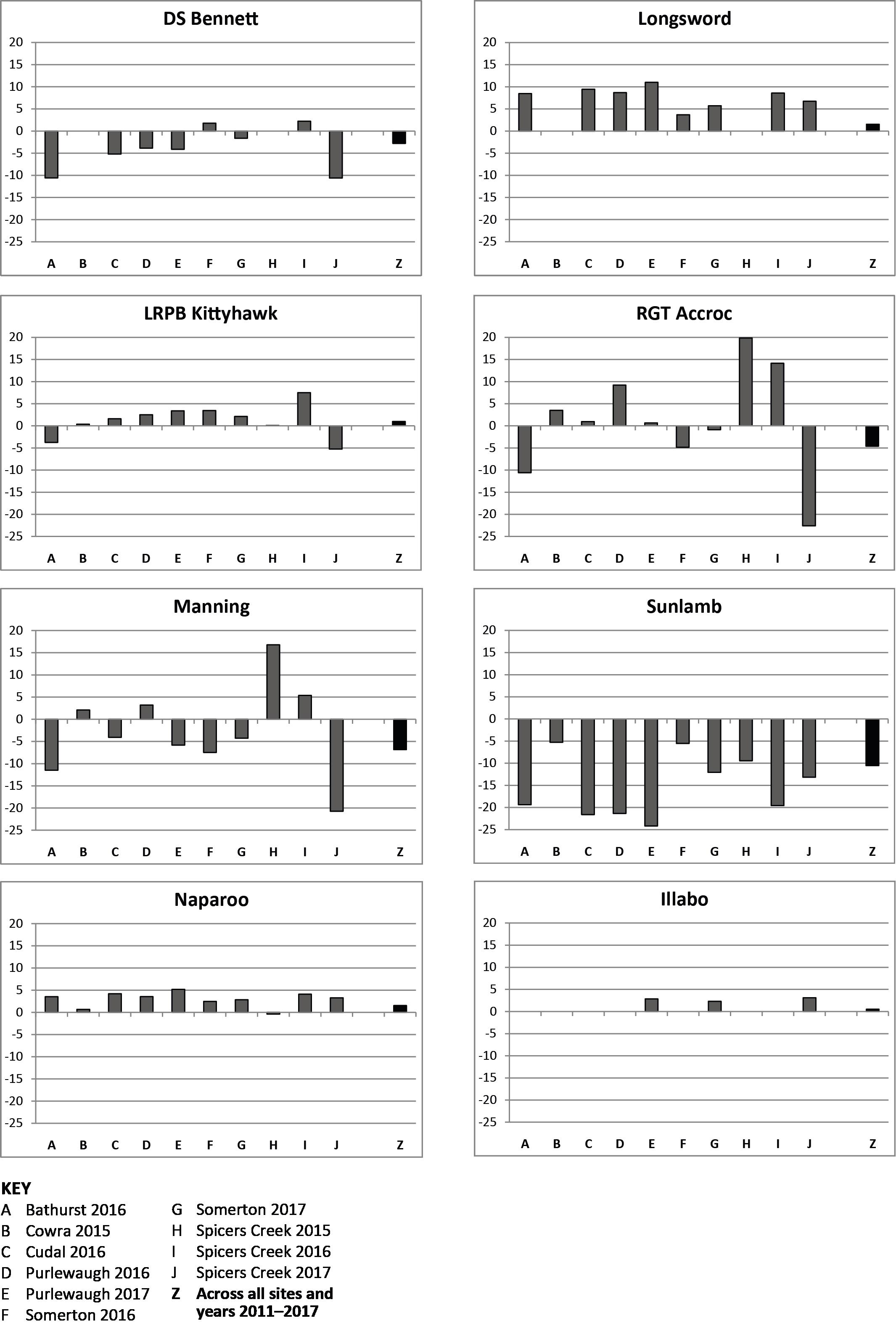 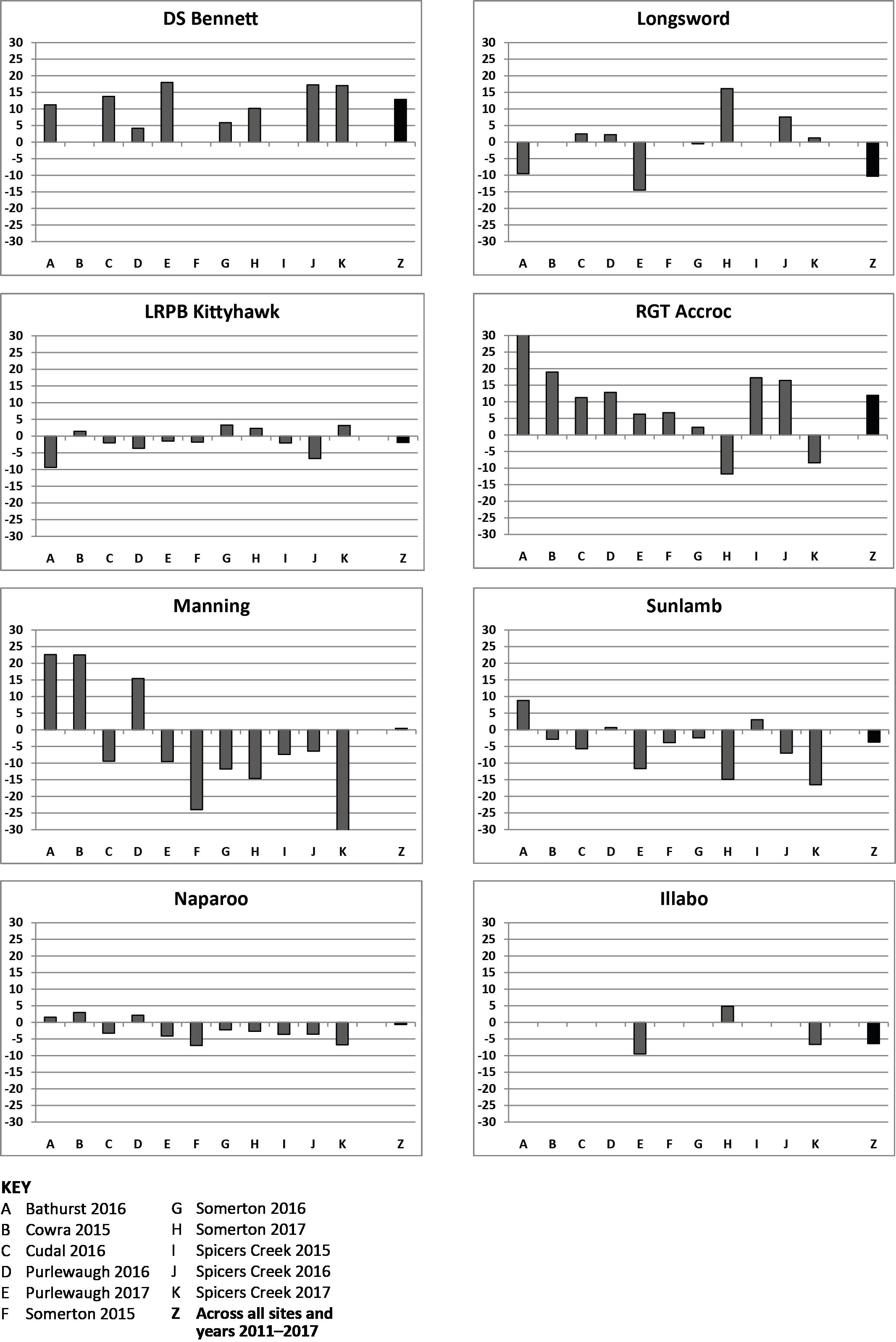 There is a strong relationship between a dual-purpose wheat dry matter production and grain yield recovery with seasonal conditions, with varieties showing they are better suited to particular climatic conditions and season length. No single variety is suited to all growing situations. Experiments across NSW have identified that there is a significant variation in performance of new varieties with older industry checks such as EGA Wedgetail, and that sowing date and in-crop management influence this performance.

Growers need to consider not only the grain yield potential of a variety, but its suitability for grazing in their region and farm business. Returns from dual-purpose crops are driven by three primary factors: grain yield, grain quality classification and dry matter/fodder production. Placing an economic value on fodder production can be difficult as it might not be directly related to livestock sales, but rather providing a fodder source in key periods through the season where pasture production is limited.

Properly managed dual-purpose wheat crops have the ability to compete with grain only crops on an economic basis and in many cases provide a higher dollar return per hectare than grain only crops.

This research was co-funded by NSW DPI and GRDC under projects; DAN00184: ‘Evaluation and agronomic management of dual-purpose cereal varieties for NSW mixed farming systems’ and DAN00213 ‘GAPP – Optimising grain yield potential of winter cereals in the Northern Grains Region’.

A sincere thank you for the assistance of project staff from DAN00184 - Jennifer Pumpa, Philip Armstrong, Peter Roberts, Ryan Potts, Jessica Perry and Emma Angove for technical assistance in managing the field trials and the grower co-operators across NSW for hosting on property trials.

Gilmour A R, Cullis B R, and Verbyla AP (1997) Accounting for natural and extraneous variation in the analysis of field experiments. J. Agric. Biol. Environ. Statist. 2, 269–273