Winter wheat varieties allow wheat growers in the Southern Region to sow much earlier than currently practised, meaning a greater proportion of farm can be sown on time. The previous GRDC Early Sowing Project (2013-2016) highlighted the yield penalty from delayed sowing.  Wheat yield declined at 35kg/ha for each day sowing was delayed beyond the end of the first week of May using a fast-developing spring variety.

Sowing earlier requires varieties that are slower developing. For sowing prior to April 20, winter varieties are required, particularly in regions of high frost risk. Winter wheats will not progress to flower until their vernalisation requirement is met (cold accumulation), whereas spring varieties will flower too early when sown early. The longer vegetative period of winter varieties also allows dual-purpose grazing.

The aim of this series of experiments is to determine which of the new generation of winter varieties have the best yield and adaptation in different environments and what is their optimal sowing window. Prior to the start of the project in 2017, the low to medium rainfall environments of SA and Victoria had little exposure to winter varieties, particularly at really early sowing dates (mid-March).  Three different experiments have been conducted in the Southern Region in low to medium rainfall environments during 2017 and 2018, and one of these has been matched by collaborators in NSW for additional datasets presented in this paper.

Which wheat variety performs best in which environment and when should they be sown?

Table 1. Summary of winter varieties, including Wheat Australia quality classification and disease rankings based on the 2019 SA Crop Sowing Guide.

How much stored soil water and breaking rain are required for successful establishment of early sown wheat without yield penalty?

What management factors other than sowing time are required to maximise yields of winter wheats?

For example, at Hart in the Mid North of SA, each winter variety flowered within a period of 7-10 days across all sowing dates, whereas spring varieties were unstable and ranged in flowering dates over one month apart (Figure 1). In this Hart example, the mid developing winter wheats such as Illabo and Kittyhawk were best suited to achieve the optimum flowering period of September 15-25 for Hart. In other lower yielding environments such as Loxton, Minnipa and Mildura, the faster developing winter variety LongswordA was better suited to achieve flowering times required for the first 10 days in September. 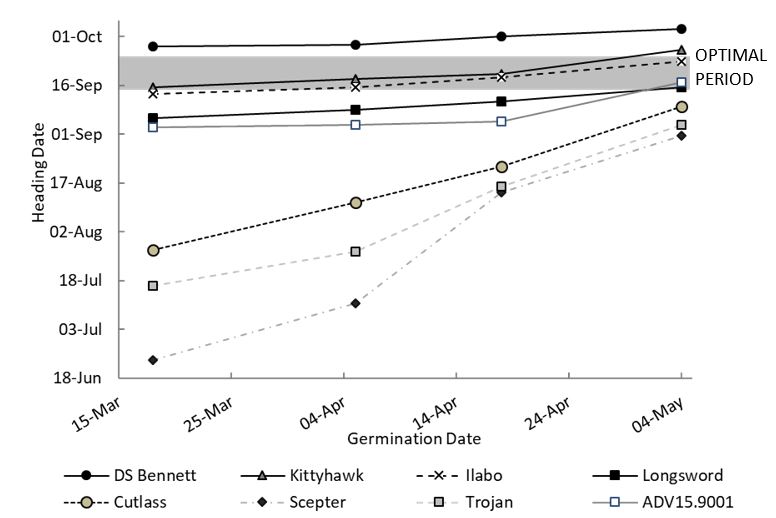 Figure 1. Mean heading date responses from winter and spring varieties at Hart in 2017 and 2018 across all sowing times — grey box indicates the optimal period for heading at Hart.

Table 2. Summary of grain yield performance of the best performing winter and alternate spring variety in comparison to Scepter sown at the optimum time (late April-early May).  Different letters within a site indicate significant differences in grain yield.

The best performing winter wheat varieties depended on yield environment, development speed and the severity and timing of frost (Table 2).  The rules generally held up that winter varieties well-adjusted to a region yielded similar to Scepter sown in its optimal window. These results demonstrate that different winter wheats are required for different environments and there is genetic by yield environment interaction.

The poor relative performance of Longsword in the higher yielding environments was explained by a combination of flowering too early and having inherently greater floret sterility than other varieties, irrespective of flowering date.

Sites defined by severe September frost and October rain included Yarrawonga, Mildura and Horsham in 2018. In these situations, the slow developing variety DS Bennett was the highest yielding winter wheat and had the least amount of frost induced sterility.  The October rains also favoured this variety in 2018 and mitigated some of the typical yield loss from terminal drought.  Nonetheless, the ability to yield well outside the optimal flowering period may be a useful strategy for extremely high frost prone areas for growers wanting to sow early.

2018 had one of the hottest and driest autumns on record and provided a good opportunity to test how much stored soil water and/or breaking rain is required to successfully establish winter wheats and carry them through until winter. The 10mm of irrigation applied at sowing in the sowing furrow was sufficient to establish crops and keep them alive (albeit highly water stressed in most cases) until rains finally came in late May or early June at seven of the eight sites at which Experiment 1 was conducted in 2018. The one exception was Horsham, which had very little stored soil water and a heavy, dark clay soil. At this site, plants that emerged following the first time of sowing in mid-March died after establishment and prior to the arrival of winter rains. Plants at all other times of sowing were able to survive. Experiment 2 was also located at this site, and 25mm of irrigation was sufficient to keep plants alive at the first time of sowing. A minimum value of 25mm for sowing in March on heavier soil types is supported by results from Minnipa in 2017, which also experienced a very dry autumn. In this case, approx. 30mm of combined irrigation, rainfall and stored soil water was sufficient to keep the first time of sowing alive. On lighter soil types, less water was needed and 10mm irrigation at sowing with 8mm of stored water plus an accumulated total of 13mm of rain until June allowed crops to survive on a sandy soil type at Loxton in 2018.

Based on these observations, it is concluded that when planting in March on clay soils, at least 25mm of rainfall and/or accessible soil water are required for successful establishment. Once sowing moves to April, only 10mm (or enough to germinate seed and allow plants to emerge) is sufficient.

Yield responses to changes in plant density, N timing and defoliation have been small (Table 3). There have been limited interactions between management factors and varieties. The results from Experiments 1 and 3 confirm selecting the correct winter variety for the target environment and sowing winter varieties on time (before April 20) increase the chances of high yields. The target density of 50 plants/m² is sufficient to allow maximum yields to be achieved, and there is no yield benefit from having higher densities in winter varieties. Deferring N until stem elongation had a small positive benefit at Yarrawonga, and a negative effect at Loxton. Grazing typically has a small negative effect in all varieties, however the mean percentage grain yield recovery from grazing has been higher in Longsword (95%) compared to DS Bennett (87%) and Kittyhawk (82%), respectively.

^grazing was simulated by using mechanical defoliation at Z15 and Z30, # Sowing date effect derived from Experiment 1 at Loxton and Yarrawonga.  Level of significance of main effect indicated by ns=not significant, *** = P<0.001.

Growers in the low to medium rainfall zones of the Southern Region now have winter wheat varieties that can be sown over the entire month of April and are capable of achieving similar yields to Scepter sown at its optimum time. However, grain quality of the best performing varieties leaves something to be desired (Longsword=feed, DS Bennett=ASW). Sowing some wheat area early allows a greater proportion of farm area to be sown on time. Growers will need to select winter wheats suited to their flowering environment (fast winter in low rainfall, mid and mid-slow winter in medium rainfall) and maximum yields are likely to come from early to mid-April planting dates. If planting in April, enough rainfall to allow germination and emergence will also be enough to keep plants alive until winter. If planting in March, at least 25mm is required on heavy soils. Reducing plant density from 150 to 50 plants/m² gives a small yield increase, while grazing tends to reduce yield slightly.

The research undertaken as part of this project is made possible by the significant contributions of growers through both trial cooperation and the support of the GRDC — the authors would like to thank them for their continued support.  The project is led by La Trobe University in partnership with SARDI, Hart Field-Site Group, Moodie Agronomy, Birchip Cropping Group, Agriculture Victoria, FAR Australia and Mallee Sustainable Farming. Collaboration is with NSW DPI, Central West Farming Systems and AgGrow Agronomy & Research.