How did barley fare in a dry season?

Compared to wheat, barley is considered to be more widely adapted, has superior frost tolerance, and offers higher yield potential across environments of southern Australia. A comparative analysis of the best performing barley and wheat genotypes (defined as highest yielding treatment), where experiments were co-located in southern NSW from 2015-2018, indicated that barley maintained a constant yield advantage over wheat at all yield levels, including in low yield potential seasons such as 2018 (Figure 1). 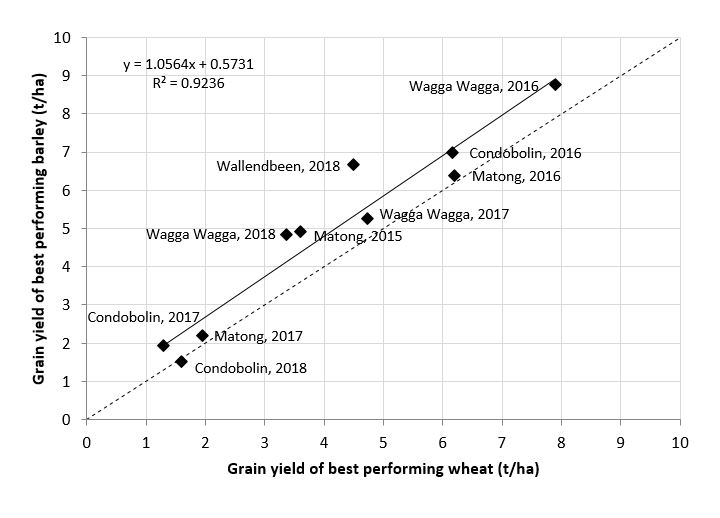 Matching varietal phenology and sowing date to achieve an optimal flowering time for each growing environment is the most effective management strategy in minimising effects of abiotic stresses, whilst maximising grain yield in all seasons. Recent yield improvements in barley varieties have been achieved through direct selection of yield based on traditional May sowing dates and suitable flowering dates, achieved through indirect selection of phenology types with photoperiod sensitivity and without vernalisation responses (Porker et al. 2017). However, a recent trend towards the earlier sowing of cereals (and canola), as well as European long-season spring barley introductions such as RGT Planet has highlighted differences in barley phenology in southern NSW. This paper presents phenology and grain yield responses of some diverse barley genotypes with respect to sowing date across three environments in southern NSW in 2018, and discusses options for early sowing opportunities.

Field experiments were conducted at Condobolin and Wagga Wagga to determine optimal sowing date and phenology to maximise grain yield. A range of genotypes with varied development (through different responses to vernalisation and photoperiod) were sown across sowing dates from mid-April to late May. In 2018, grain yield and phenology responses were significantly influenced by below average rainfall  and frost at both sites, with growing season rainfall (April to October) recording  of 91 mm at Condobolin (long  term average – 246 mm ) and 135 mm at Wagga Wagga (long term average – 355 mm ). Eleven extreme frost events (<-2°C) were recorded at both sites, including -4.9°C (28 August), -6.3°C (29 August), -5.4°C (30 August) and -3.9°C (17 September) at Wagga Wagga. Sowing dates were achieved by supplementary irrigation to ensure establishment due to lack of reliable autumn rainfall.  The Condobolin site received 30 mm prior to all sowing dates and a final irrigation of 20 mm in early September, whilst at the Wagga Wagga site, the first two sowing dates were established with 15 mm via drippers at sowing, and the site was rainfed thereafter.

Generally, flowering date is a strong predictor of yield, with genotype and sowing date combinations that flower in early-mid September at Condobolin, and in late September- early October in Wagga Wagga capable of achieving the highest yields. In 2018, there was significant variation in grain yields for genotype x sowing date combinations which flowered within the optimal period at both sites. (Figure 2 and 3).  At both sites, optimal flowering time and similar grain yields were achieved by both fast winter type Urambie sown mid-late April and the best performing spring type sown mid-May, whilst novel French winter genotypes, characterised as having a strong vernalisation and photoperiod response flowered too late and suffered a significant yield penalty as grain filling occurred under terminal drought conditions (Table 1). 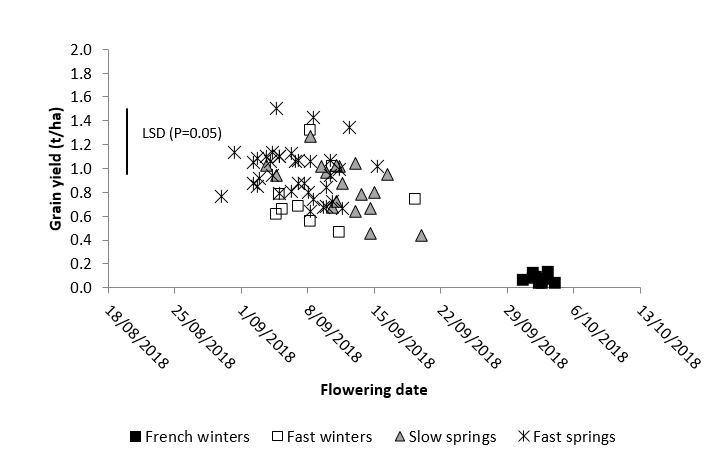 Figure 2. The relationship between flowering date and grain yield of genotypes with varied phenology patterns sown 23 April, 5 May and 28 May at Condobolin in 2018. Figure 3. The relationship between flowering date and grain yield of genotypes with varied phenology patterns sown 16 April, 8 May and 28 May at Wagga Wagga in 2018.

Genotypes varied significantly in phasic development in addition to flowering time as shown for the Wagga Wagga site in Figure 4. Experiments conducted from 2014-2018 indicate many spring varieties achieve optimal flowering times and greatest grain yields when sown mid-May in southern NSW. Faster developing spring types (with minimal responses to vernalisation), sown early (when temperatures are warmer and days longer), progressed quickly and had a shorter vegetative phase, and flowered earlier in comparison to slower spring and winter types. For example, La Trobe sown 16 April 2018 at Wagga Wagga, started stem elongation (GS30) on 2 June. However, winter type Urambie sown on the same day (16 April), had a prolonged vegetative phase, due to its vernalisation requirement and reached GS30 four weeks later on 6 July. It also had a relatively stable flowering response across sowing dates.

Increased photoperiod requirements of Commander and Banks resulted in slightly slower development comparative to La Trobe, however, despite this they still achieved greatest grain yields from the mid-May sowing (Table 1). RGT Planet is also a longer- season spring genotype, though via a different phenology pattern (minimal vernalisation response coupled with weak photoperiod response), and is characterised as having only a slightly longer vegetative phase than La Trobe, with an extended reproductive phase. RGT Planet has shown some flexibility across sowing dates, and is capable of being sown earlier in May than La Trobe, however, in frost prone environments, due to its lack of vernalisation response, it is not suited to April sowing dates. 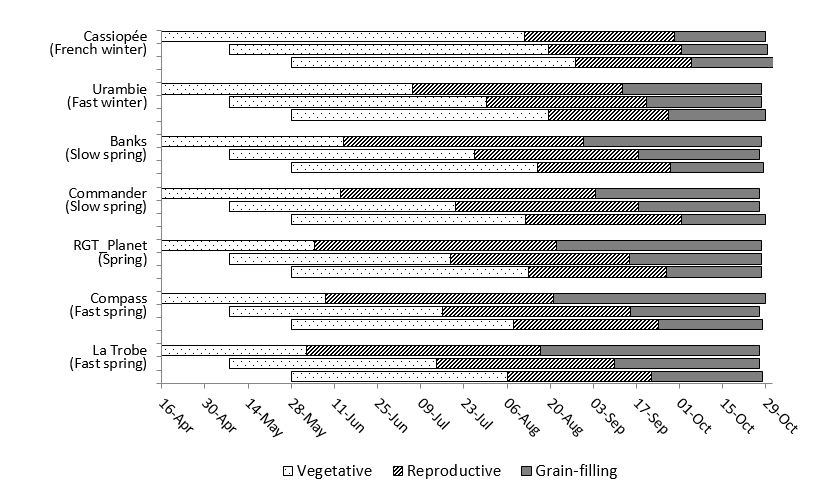 Table 1. Grain yield of genotypes across three sowing dates (SD) at Condobolin and Wagga Wagga in 2018.

Highest yields were achieved by genotypes which flowered late September-early October, with a yield penalty associated with the delayed flowering of European winter types beyond the optimal window (Figure 5). The yield penalty commonly experienced for early sowing of fast developing types (resulting in flowering earlier than optimal) was not as severe as for Condobolin (Figure 2) and Wagga Wagga (Figure 3) at Wallendbeen (Figure 5) in 2018. This is likely due to reduced early frost risk, and timely grain filling prior to significant moisture stress experienced by slower winter types. 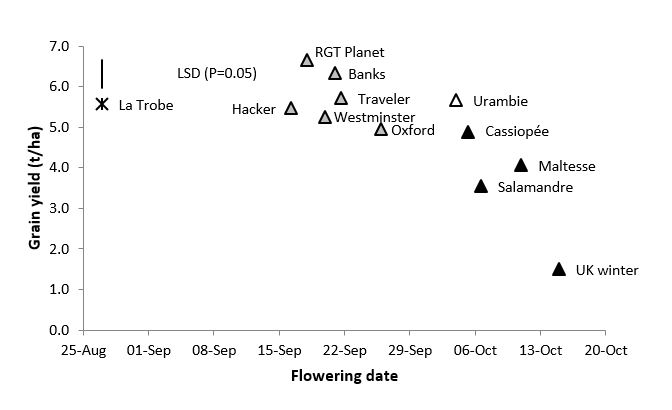 Figure 5. The relationship between flowering date and grain yield of barley genotypes sown 13 April at Wallendbeen in 2018.

An analysis comparing the best performing spring types (sown at optimal time for each environment, typically traditional May dates), with the best performing fast winter and slow winter types was conducted across nine experiments in southern NSW and SA in 2017-2018. This indicated that the fast winter types (typically Urambie) were capable of comparable high yields when sown early, and both offered a constant significant yield advantage over slow winter types at seven out of nine sites (Figure 6). This suggests that a fast winter genotype is capable of achieving high yields when sown earlier than traditional May sowing dates. The strong vernalisation requirements of the European winter types consistently resulted in later flowering than optimal at all sites and were not able to maintain grain yield even in high rainfall environments. Further research investigating options for early sowing in southern NSW, requires suitable germplasm which combines a vernalisation requirement capable of early sowing. 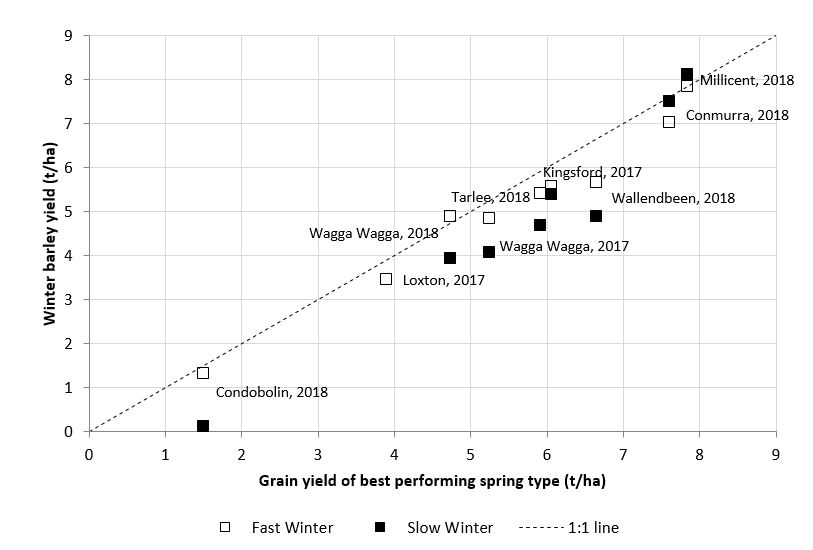 Despite the seasonal conditions experienced in 2018, barley was able to achieve stable grain yields across a range of yield environments comparative to wheat. High yields were achieved through varied genotype x sowing time combinations, however in southern NSW, many barley varieties are still suited to traditional May sowing dates. Recent European introductions of longer season spring types such as RGT Planet offer opportunities for slightly earlier sowing (early May) and slower spring types such as Banks and Commander have alternative phenology patterns compared with benchmark fast spring types such as La Trobe. Recent research has evaluated novel European winter types to provide options for early sowing; however these did not offer a yield advantage over Australian fast winter types such as Urambie. Whilst new spring types have displayed some alternative phenology patterns, early sowing options in frost prone environments of southern NSW are currently limited by suitable winter genotypes.

The research undertaken as part of this project is made possible by the significant contributions of growers through both trial cooperation and the support of the GRDC – the author would like to thank them for their continued support.

Sincere thank you for the technical assistance of Cameron Copeland, Dean Maccallum, Mary Matthews and Jordan Bathgate at the Wagga Wagga site; and Leisl O’Halloran, Karen Brangwin and Daryl Reardon at the Condobolin site.

We also acknowledge the support of NSW DPI and their cooperation at the Wagga Wagga Agricultural Institute and Condobolin Agricultural Research and Advisory Station.

This research was a co-investment by GRDC and NSW DPI under the Grains Agronomy and Pathology Partnership (GAPP) project in collaboration with SARDI.