Since 2014 research to better understand the yield drivers of canola has been conducted in southern and eastern Australia in the GRDC funded Optimised Canola Profitability (OCP) project. The aim was to improve canola profitability through a better understanding of how phenology and environment can guide tactical agronomy to improve canola yield and profit. This research is targeted at low to medium rainfall zones and is a collaboration between CSIRO, NSW DPI and GRDC, in partnership with SARDI, Charles Sturt University (CSU), Mallee Sustainable Farming (MSF) and Birchip Cropping Group (BCG). The project links closely with similar GRDC supported projects in Western Australia and high rainfall zones (HRZ).

From southern Queensland, down through New South Wales, into Victoria and across to South Australia the OCP project has conducted a range of field experiments and modelling simulations to improve canola profitability in the region. Activities have included:

This paper will discuss how findings from these activities are being integrated to help improve canola profitability.

Field experiments and modelling conducted in the first few years of the project helped to better understand the drivers of canola development (temperature, day length) in modern varieties, as well as improving the understanding of how early sowing of canola influences varietal phenology (flowering time) and grain yield. This information then helped to improve the ability to simulate canola growth under Australian conditions, so that models could be used to evaluate a range of scenarios not possible in just a few years of field experiments.

One of the key findings in this phase of the project, was that canola yield was optimised by ensuring that canola started flowering in a window where the effects of heat/ drought and frost on flowers and pods were minimised. The dates for the flowering window were specific to each locality, depending on the risk of heat and/or frost events.

An example of this is the trial conducted in 2018 at Yeelanna (Figure 1). The longer season variety, Archer CL performed well relative to the other varieties when planted early (14 April), whereas shorter season variety Nuseed Diamond improved in grain yield when planted later (8 May). At the later sowing time, the lower yielding Archer treatment flowered too late (3 Sept) (Table 1) compared to the optimal start of flowering around 12 August, and the lower yielding Nuseed Diamond treatment flowered too early (5 July) compared to the more optimal 3 August. 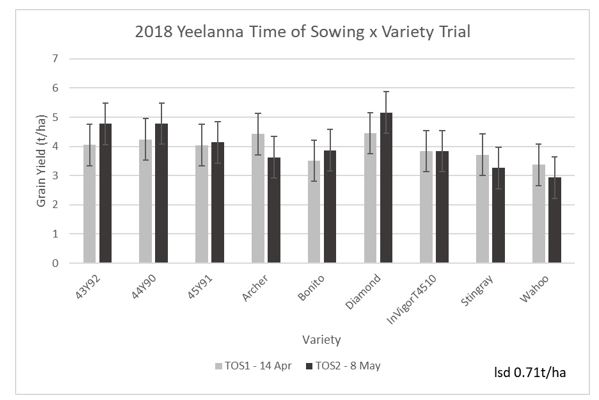 Using APSIM crop modelling, meteorological data and information gathered from field experiments over the past four years, optimal start of flowering dates can be generated for any canola growing locality in Australia (some of these can be found in the e-book.. Once the phenology characteristics of a variety are understood (i.e. how long it will take a variety to flower in a given environment) it is possible to work backwards from the optimal start of flowering date to find an optimal sowing date (Table 2) for a locality. 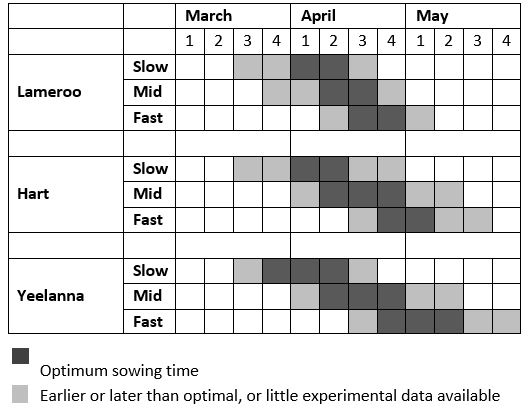 The method that many of the canola breeding companies use to classify variety development is largely based on time to maturity relative to other varieties sown at a conventional sowing time, and not measured by time to reach flowering when sown early. Also, canola varieties can rapidly change. Many of the varieties that were used in the first few years of the OCP project are now no longer available.

To better categorise the development speed of canola varieties, particularly in relation to early sowing, and to gather information on newly released varieties, four experiments were established across Australia in 2018 (Perth - WA, Port Lincoln- SA, Wagga Wagga – NSW and Trangie – NSW). The sites were selected for their range in climatic conditions. The experiments recorded the time to reach the start of flowering (50% of plants with one open flower) from early and more conventional sowing times. Results for the Port Lincoln site are presented in Figure 2. Figure 2. Date of start of flowering of canola varieties sown at two dates (16 April and 18 May) near Port Lincoln in 2018.

These data show that while most of the varieties rank similarly in their time to start flowering regardless of sowing time, there are some notable exceptions, for example, Hyola®580CT will flower at a similar time to many of the mid phenology varieties when sown in May, but flowers very quickly and outside the optimum when sown in April. Sowing early also increases the differences to flowering time, largely due to the warmer temperatures in April accelerating plant development of the varieties that are most sensitive to temperature. This means, that sowing early a variety with fast phenology will cause it to flower considerably quicker (in calendar days) than if it was sown at a more conventional time, and often outside the optimum window.

By adding the data from the four phenology trial sites conducted in 2018 to data previously collected in the OCP project it is possible to categorise each of the modern varieties for its phenology type in early sowing situations (Table 3).

Table 3. Phenology and maturity rating of most of the modern canola varieties.

Matching the planned sowing time (or most common break to the season) from Table 2 with a variety that has the correct phenology (from Table 3) is now possible. For example, in the Yeelanna environment on Lower Eyre Peninsula, the most common break to the season often occurs in the last week of April. If planting in the last week of April, growers in this environment have the choice of growing any variety from fast to mid phenology and have it flower in the optimal window. However, for growers at Lameroo, who may commonly get a break to the season in early May, the best chance of flowering in the optimal window and maximising yield will come from planting only fast phenology varieties.

Two of the factors that add considerably to canola’s risk profile in the low rainfall zone is (i) the crops high demand for nitrogen (N) and (ii) the decision of whether or not to grow a hybrid or open pollinated variety. Being able to understand how effectively canola is able to convert soil available and applied N to yield across a range of soil types in the low rainfall environment will help identify a strategy that delivers the highest yield at the lowest risk. In 2018, field experiments examining this were conducted at Karoonda, Minnipa and Lameroo. Just the Karoonda experiment will be discussed here.

The Karoonda trial was sown on 4 May across a range of soil types, typical of many Mallee type environments, ranging from dune sand, down through the mid-slope and into the swale. Varieties ATR Stingray and Pioneer®43Y92CL were planted and N applied at differing rates early post-emergent. On the day of sowing, the sand averaged 37kg mineral N/ha/m depth and 92mm plant available water (PAW) while the mid-slope averaged 53kg mineral N/ha/m depth and 84mm PAW. Rainfall to end September was 114mm compared with 257mm average

The obvious way to reduce risk in canola production in the low rainfall zone is to reduce some of the upfront costs, such as the cost of hybrid seed. However, as results from this trial and other observations in the low rainfall zone show, the adoption of well-adapted hybrids has the potential to produce high, stable, N use efficient yields that are potentially more profitable than lower cost, open pollinated varieties. Previous recommendations to not grow hybrids in low rainfall environments should be reconsidered.

Matching sowing time with varietal phenology so that start of flowering occurs in a window where the risk of water, heat and frost stress is minimised will greatly improve the chances of maximising yield.

Phenology information on most of the currently available canola varieties, particularly their response to early sowing, is now known, and can be used to aid variety selection.

Well-adapted hybrid varieties planted in the low rainfall zones have been shown to produce high, stable canola yields in a well below average rainfall season.

This work is a component of the 'Optimised Canola Profitability' project (CSP00187) a collaboration between NSW DPI, CSIRO and GRDC in partnership with SARDI, CSU, MSF and BCG.

Thank-you also to the South Australian growers and Hart Field Site group for making their land available for the field trials and to the technical officers of the SARDI New Variety Agronomy group for their assistance in conducting the field trials.