Dryland farmers are already successfully sowing maize and sorghum earlier than recommended, though the benefits for yield and the cropping system and the likely risks are not known.  Previous research by Muchow, et al. (1994) identified that winter sown sorghum crops show high yield potentials with increased frost risk and a larger canopy increasing water stress risk.  However, these risks require re-evaluation because frost risk thresholds (thresholds were assumed in previous research) are unknown and modern hybrids have a smaller canopy.

In irrigated systems, sorghum is a profitable option when irrigation water is limited, though it is often assumed to be a less profitable option than cotton in fully irrigated systems. Winter-sowing and opportunistically ratooning sorghum allows growers to manage risk when water supply is limiting at the beginning of the season and intensify production and profits if rainfall is greater than expected.

Here we report on irrigated and dryland trials conducted by UQ-QAAFI in the 2018-2019 seasons.  This series of trials is part of the multi-environment sorghum agronomy experiment in collaboration with DAFQ and NSW DPI. The experiment was designed to develop a data set to support the present trend in advancing sowing times of sorghum and assess potential benefits and risks from adopting the strategy at the crop and cropping system levels.

Two trials were sown in the 2018-2019 season at Surat and Warra, Qld. Trials included three times of sowing, four plant populations and nine commercial hybrids (Table 1).  In addition, after the harvest of the second time of sowing at Surat, the crop residues were mulched, fertilised, irrigated and allowed to ratoon into a second harvest. A third time of sowing occurred at the same time when sowing 2 was ratooned (Table 1). This allowed us to also compare the yield of the ratooned sorghum crop with the yield of a sown crop.

For example, Figure 1A shows that chilling or heat stress temperatures are least likely in narrow and regionally specific windows during spring and autumn. These windows have a lower likelihood of heat (>38°C) and chilling (<13°C) events in a 10-day period corresponding to the sensitive flowering phase.  However, the impacts of extreme temperatures on yield depend on duration of the heat/chilling exposure, crop water status and cultivar.  Research on the relationships between extreme temperatures and the yield of early sown sorghum will continue throughout the GRDC funded project “Optimising Sorghum Agronomy”. 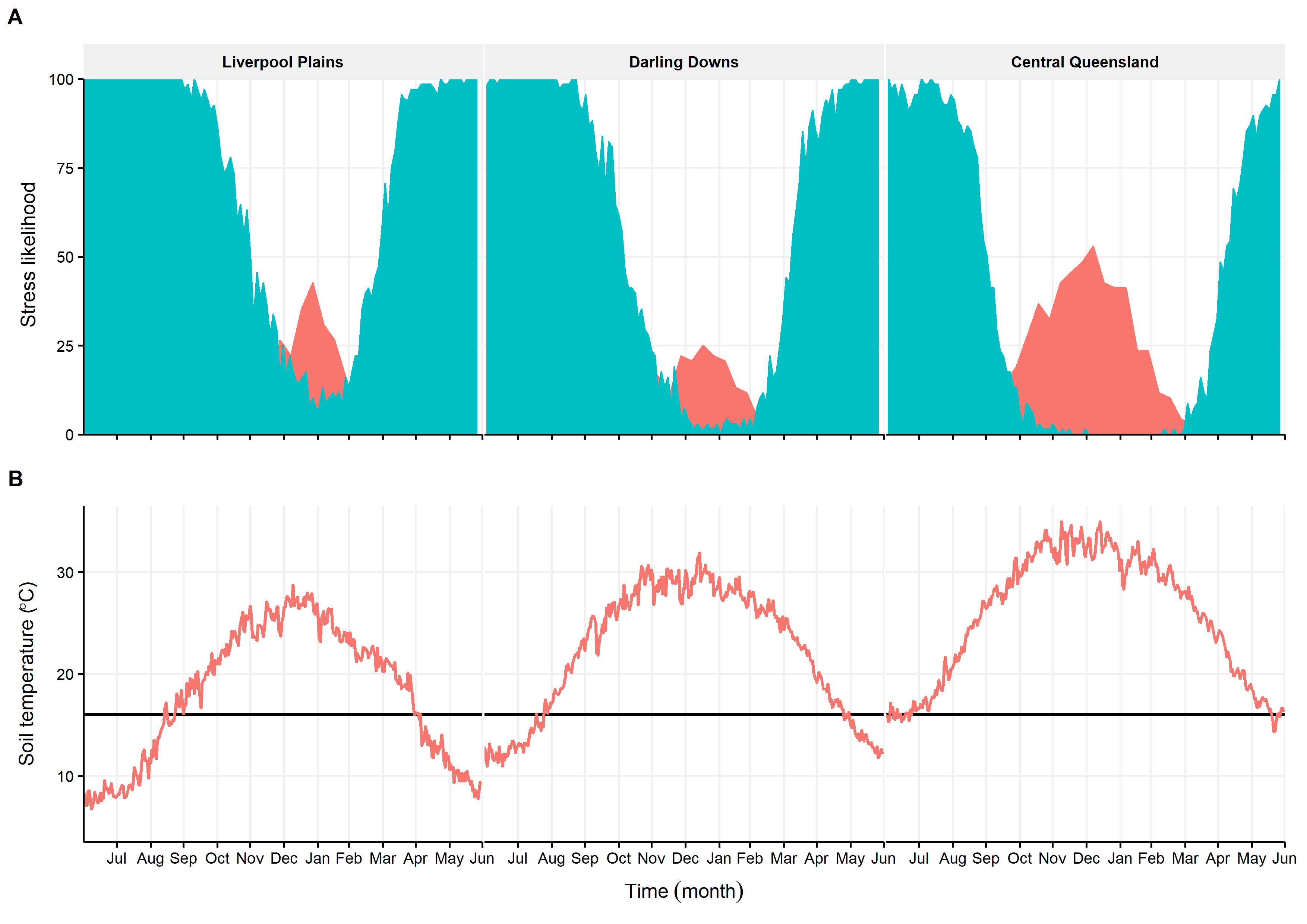 Figure 1. The likelihood or percentage of seasons exposed to heat (>38°C; red) or chilling (<13°C; blue) during a 10-day temperature sensitive period around flowering (A); and (B) the mean 9:00 am soil temperature measured at 50 mm depth in three sorghum growing regions, the Liverpool Plains, Darling Downs and Central Queensland. The horizontal line in Figure 3B shows the recommended minimum seeding depth temperature threshold for sorghum. (Note: 9:00am soil temperatures are shown because high quality long-term data for the conventional 8:00 am or minimum daily 100 mm deep soil temperatures were not available).

The easiest way for growers to move the flowering window is to plant at a different time to their standard sowing time or to select a quicker maturity hybrid. As there is limited variation in maturity type among the commercial hybrids, moving the sowing window is the more effective option. This means sowing sorghum crops much earlier than normal, potentially moving sowing into the months of July and August depending on local climate. Soil temperatures during this period are cooler than the recommended (>16-18°C measured at sowing depth during the coolest period of the day or 8:00am; Figure 1B).  Long-term trends show that July to August soil temperatures are coldest in the southern regions of Darling Downs and Liverpool Plains.  However, time of sowing decisions require information on each field because of varying weather, topography, soil type, water content and ground cover, all of which strongly influence seedbed temperature.

Regardless of the sowing time, achieving rapid and uniform crop establishment is also required to realise yield potential. The decision on sowing time will then need to evaluate the trade-off between likely benefits of reducing heat stress around flowering, with the higher risk of early frost damage, higher establishment losses and potential for less even crop canopy uniformity.

Temperature effects on sorghum germination in 2018-2019

Planting sorghum into moist soils at extremely low or high temperatures can reduce crop establishment and reduce crop uniformity. Crop establishment is the result of several distinct plant development stages including seed germination, emergence, root proliferation and leaf growth.  Here we studied the impact of extreme temperatures on the germination for a range of commercial sorghum hybrids in the lab.

Results showed that the lowest and highest observed seedbed temperatures from Figure 1B, reduced the proportion of sorghum seeds that successfully germinated in the lab (Figure 2). 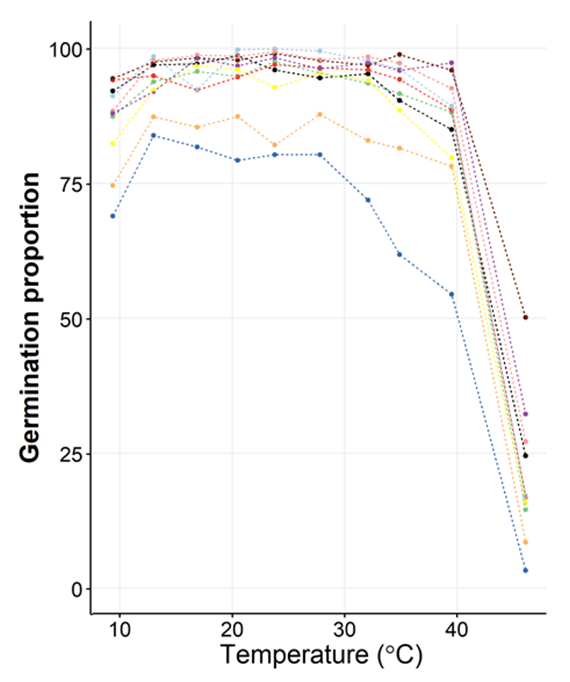 Figure 2. The proportion of sorghum seeds that successfully germinated when incubated at constant temperatures.  Each colour represents one hybrid seedlot but they are not identified as the experiment doesn’t differentiate if the result is due to genetic, seed production or storage factors.

Low temperatures delay the period from sowing to germination and emergence.  Therefore, quantifying the number of growing degree days is important. Growing degree days (GDD) are a measure of the accumulation heat and are used to predict plant development.  GDD = ∑(Tmax –Tmin)/2 – Tbase. Tmax and Tmin are the daily maximum and minimum temperatures. Tbase is a crop specific minimum temperature for development. Here we estimated the required number of cumulative heat units for ten commercial hybrid seedlots under a controlled temperature environment.  The results show that the first 10% of seeds germinate with 5 days but it took 9 days to achieve >90% germination at Surat in 2018 (Figure. 3). Results also show that germination time is similar across diverse sites on some dates, but germination timing is also highly variable for different sowing dates at any site (Figure. 3).

This means that July-August soil temperatures ≥9.4°C do not limit germination of commercially available sorghum hybrid-seedlots. However, germination will take a long time and will be spread over several days, meaning that the seedbed must remain moist for at least 9 days for successful germination and longer for emergence.

Investigations into the impacts of low seedbed temperatures on emergence continue in 2019-2020 through the GRDC funded project “Optimising Sorghum Agronomy”. Figure 3. The predicted number of days from sowing until germination for sowing dates between 1st August and November 2018 based on seedbed temperatures recorded at four on-farm trial sites.  Black line shows 50% seed germination and the grey shading shows the spread from 10 to 90% germinated seeds. (Note: data is for seed germination and not for crop emergence
which will take far longer) 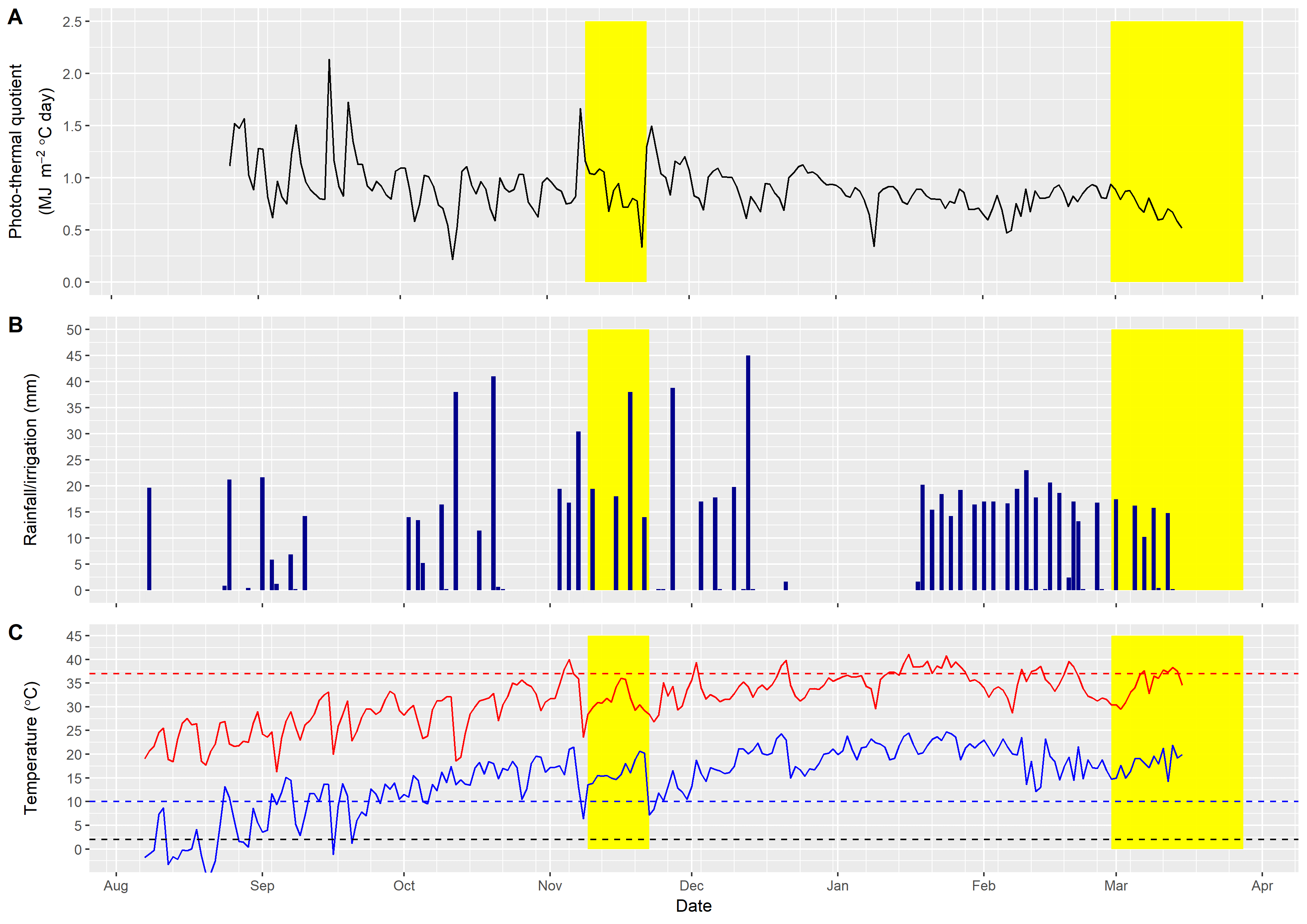 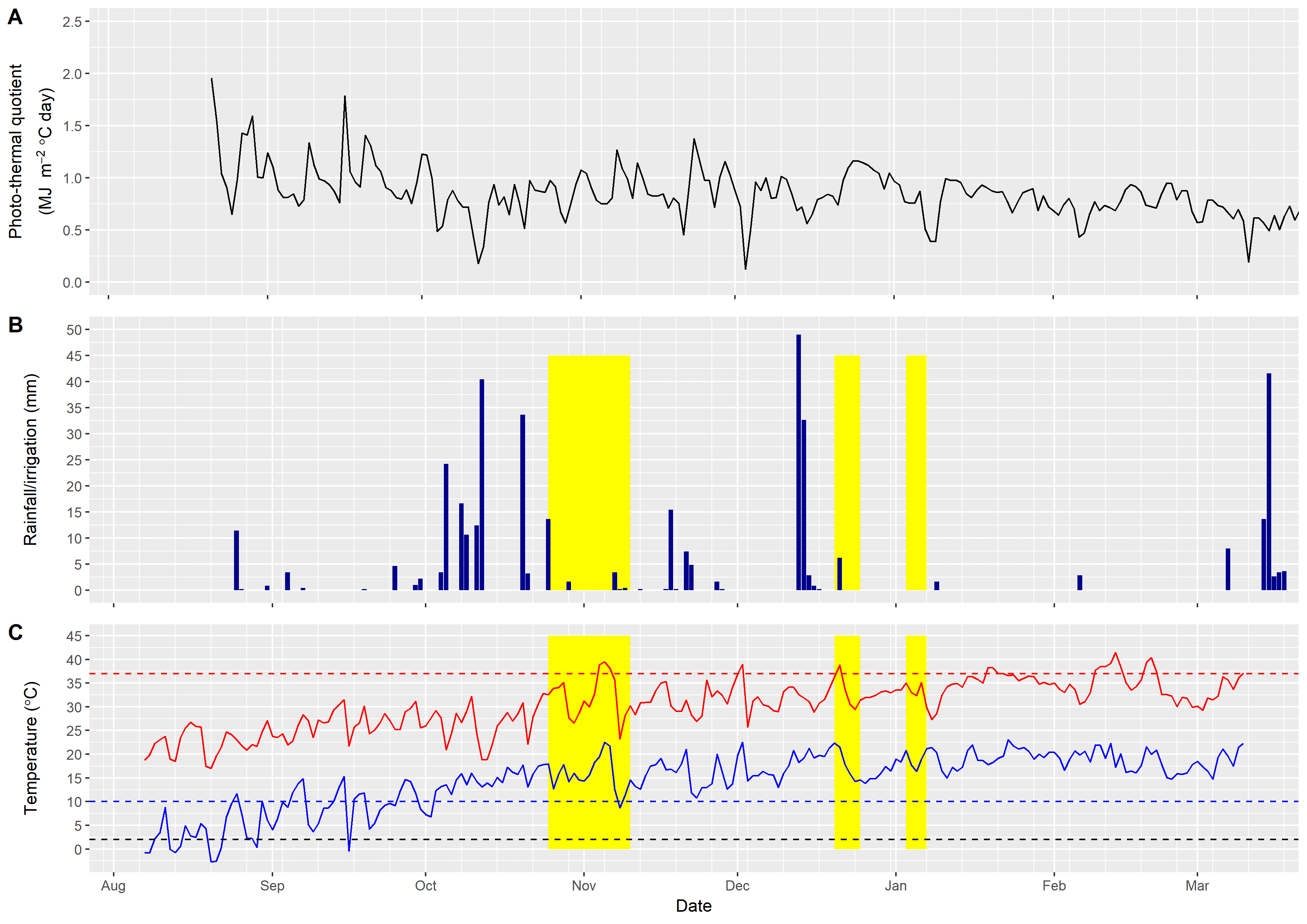 We expect high yields for early sown sorghum crops when water is sufficient, because sunny spring days with cool temperatures (high photo-thermal quotient) should maximise growth rate.  However, cool non-freezing “chilling” temperatures can stress some crops and cultivars. Low temperature limits for sorghum growth and development are not characterised for modern Australian hybrids.

These results mean that sorghum crops can be sown much earlier without yield penalty, supporting 2017-2018 results.  Further research on sorghum growth, development and root function at frost and chilling temperatures is required to understand early sown sorghum yield potential. 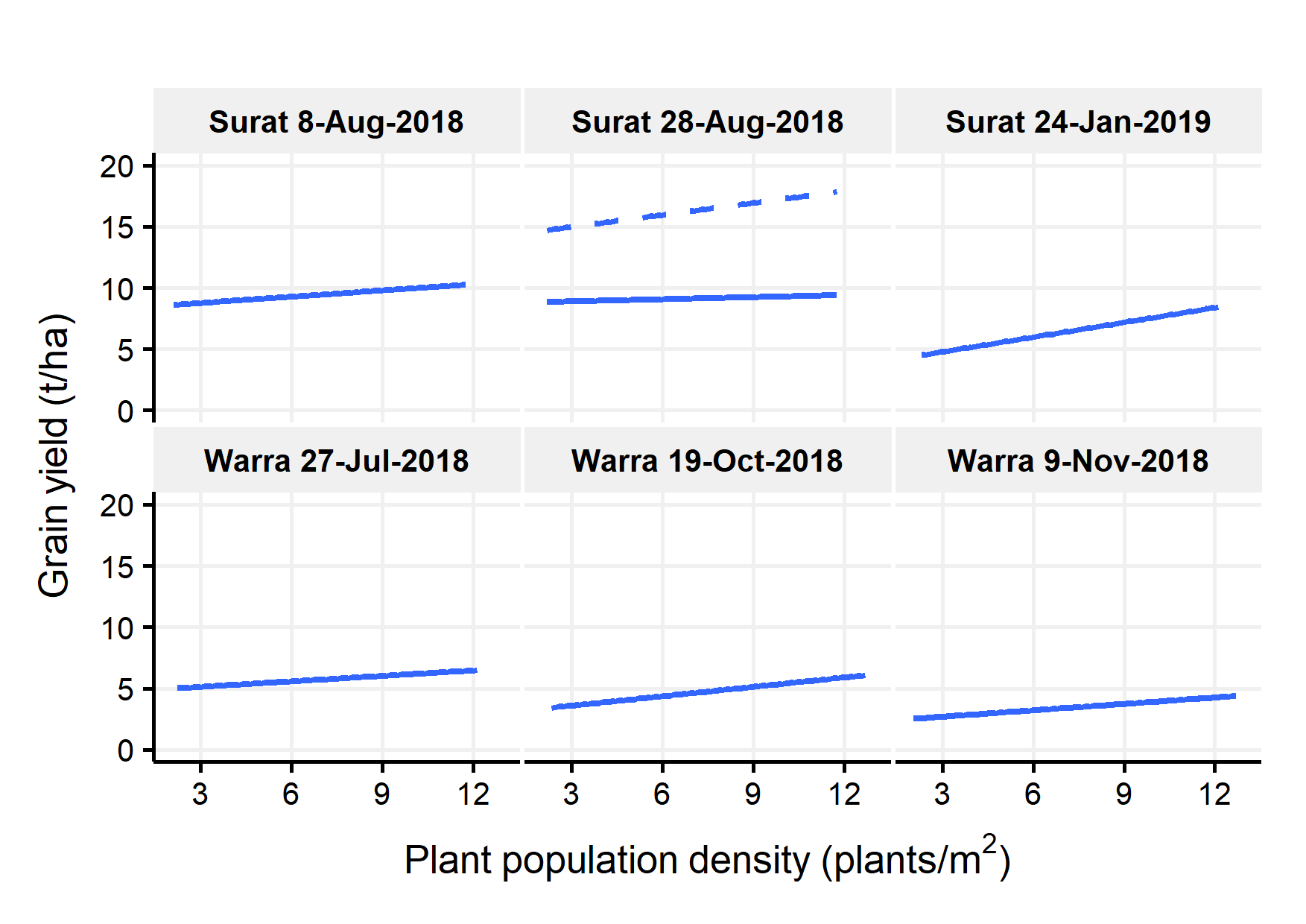 Sorghum can be sown into soil moisture much earlier than recommended, but seedbed temperatures must be monitored in each field and the seed must have high germination rates at low temperatures. Treated stored seed from previous seasons should not be used.

Ratooning of sorghum provides an alternative to cotton, particularly in seasons with low water availability.

The Optimising Sorghum Agronomy project is developing agronomic packages for winter-sown sorghum. For more information follow us on Twitter @Queensland_fsr and at https://www.qld-fsr.info/

In particular, the support of the Bidstrup, Warra and Milla, Surat families is gratefully acknowledged.

Optimising sorghum agronomy is a collaboration between the Grains Research and Development Corporation, University of Queensland, NSW Department of Primary Industries and Queensland Department of Agriculture and Fisheries.