Canola is generally believed to be more sensitive to drought than cereals. However, in the recent dry 2018 and 2019 seasons, the success of early-sown hybrid varieties with robust Nitrogen (N) rates at several sites has been surprising. Many people assumed that the vigorous, early canola growth would exhaust soil water rapidly, create terminal stress and reduce grain yield – but this has not been the case. Recent studies of canola root growth and water use in the GRDC Optimised Canola Profitability Project (OCPP), provide an explanation, related to the capacity of early-sown canola to grow deep roots and capture deep stored water to support higher yield.

The benefits of early-sown, slow-developing canola crops over later-sown, fast-maturing varieties are less likely in the absence of deep stored water, or when in-crop rain is plentiful. In addition, dry subsoils that may be left as a legacy of the high yielding, early-sown canola crops, may persist if the summer is dry. This can limit the yield potential of following crops. Adjustments to crop choice, sowing date and N fertiliser management may be required to reduce the risk of low yields and to maximise profit across the cropping sequence. Grazing early-sown crops can be a strategy to offset some of the risk, as growing biomass in winter is far less risky than filling grain in spring.

This paper discusses root growth, water use and yield potential of earlier-sown, slow-developing canola crops and how to best manage them within the crop sequence to improve profit and reduce risk.

Canola is a deep-rooted crop – when soil conditions permit

Brassica species including canola (Brassica napus) are generally known to have a capacity for deep rooting. In Europe Brassica are often used as cover crops or catch crops, to capture nitrate from deep soils to prevent leaching. In the absence of restrictive soil layers, the root system has demonstrated potential to reach deep soil layers in excess of 2m, with most studies in the literature reporting maximum rooting depths for canola of 1.5 to 2.4m (Dresbøll et al. 2018; Lisson et al. 2007). Differences in maximum rooting depth between canola and other crop species are often misinterpreted based on the different lengths of the vegetative period. For example, in Canada, Merrill et al. (2002) reported maximum rooting depths for safflower of 1.64m and canola of 1.14m. However, when corrected for the different season lengths of each crop (113 days and 86 days respectively), root penetration rates were more similar (1.45cm/d and 1.33cm/d).

On red loam soils in southern NSW, the roots of perennial plants such as lucerne are known to reach depths beyond 4m, while research on annual spring wheat and canola crops involves coring to only 1.5 - 1.8m. Most crops sown in mid-May have maximum rooting depths in that range, and while canola roots occasionally protrude from the bottom of 2.0m soil cores on deep red soils, maximum rooting depths have not been investigated. Renewed interest has developed in the rooting depth of canola following the 2011 introduction of March-sown winter canola as a dual-purpose crop, and the success of slower-maturing spring hybrids sown in April. In 2018 and 2019, soil cores were taken to a depth of 4.5m on a deep red soil at Greenethorpe, NSW, to determine the potential depth of canola roots, with a focus on earlier-sown hybrid varieties.

Canola roots can grow down at 2cm per day

In 2018, the estimated root penetration rate for two varieties sown in early April; Archer, and early May; Nuseed Diamond, was similar —1.5cm/d before the start of flowering, and between 0.7 and 1.7cm/d after the start of flowering (Table 1) . In 2019 three varieties were sown onto fallow in March, April and May and all had root penetration rates of 2.3 to 2.6cm/d before flowering. The May-sown variety (which had deepest roots within coring depth after flowering) had a post-flowering root penetration rate of 1.2cm/d. An earlier study of winter canola in 2014 at another site also had an early root penetration rate of 2.0cm/d between March and June. These studies demonstrate that canola roots can penetrate soil at around twice that of wheat before flowering (wheat was ~1.2 cm/d on similar soils; Kirkegaard and Lilley 2007). Being indeterminate, canola also continues to grow roots down after flowering, while wheat rooting depth changes little after flowering. As a result, canola can achieve maximum rooting depths of >2m when sown in May. This can increase to 3 to 4m when slower maturing varieties, with longer vegetative stages, are sown in March or early April on deep loam soils.

NM = not measured as roots could not be accurately sampled (too deep, or unable to core).

Subsoil water use by deep roots

In circumstances where subsoil water has been stored over summer, deep rooted, early-sown canola can utilise the deeper water to produce higher yield. In the 2018 Greenethorpe experiment; Archer, sown on 4 April, had roots that were ~100cm deeper than Nuseed Diamond at harvest (3.2m cf 2.2m) and had extracted an extra 33mm of water from the soil during the dry spring (Figure 1).  Archer’s increased rooting capacity was confirmed with more detailed root measurements possible in the Rhizolysimeter at Wagga Wagga. Archer had consistently deeper roots than Nuseed Diamond at every growth stage recorded throughout the season (Pitt et al. 2019). 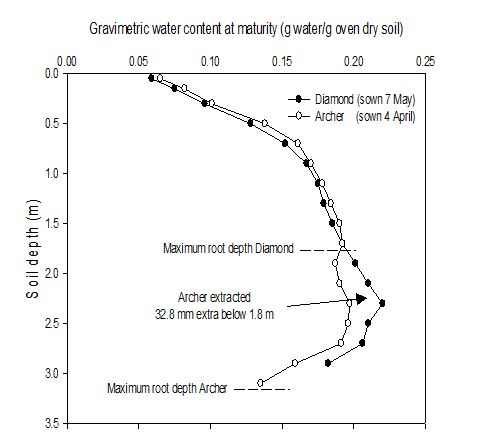 Frequency of yield benefits from deep water use

In the 2018 Greenethorpe experiment, early-April sown Archer and May-sown Nuseed Diamond flowered at the same time. Archer extracted an additional 33mm of water from the deep soil below 2m during the terminal drought (total seasonal rainfall 185mm) and generated a higher yield of 2.9t/ha compared to 1.7t/ha for Nuseed Diamond (Table 2). This represents a very high efficiency usage of deep stored water at 36kg/ha/mm. In an irrigated treatment, with 100mm of additional water supplied after flowering (total water supply 285mm), a similar yield benefit from deeper roots was observed even at this higher yield level (3.7t/ha vs 2.3t/ha). Biomass at flowering was similar for both Archer and Nuseed Diamond in the two water treatments, because additional irrigation was applied after the start of flowering. This demonstrates that the benefits of accessing deeper water can occur under a range of seasonal conditions and yield potentials.

Table 2. Growth and yield benefits of early-sown, slow maturing canola at Greenethorpe in 2018 under two different seasonal water supplies. WUE was calculated for dry treatment only.

Variety comparisons across a greater range of sites in 2017 and 2018 show an average yield advantages of around 0.4t/ha in yield ranges from 1.5 to 3.5t/ha (Figure 2). In very dry seasons (<1.5t/ha) there was no yield advantage, presumably because yield potential was low. At sites where fallow rainfall was low (<150mm), and in-crop rainfall was high (>250mm), there was less reliance on stored water and higher yields (>3.5t/ha), and also little yield advantage from earlier sowing systems (Brill et al. 2019). On the deep red loams in southern NSW, the combination of factors including; availability of deep stored water after good summer fallow rain; soils that facilitate deep root growth; AND a terminal drought period that calls upon subsoil water, can drive the yield advantage of earlier-sown, slow-maturing crops. Observations were repeated at two sites in 2019; Greenethorpe and Wallacetown, to compare hybrids sown on different dates but with similar flowering dates (Table 3). At both sites and under both water regimes at Wallacetown, the earlier-sown varieties had higher biomass at flowering and higher yield (average benefit 0.7t/ha). Root and water uptake measurements (at Greenethorpe only) confirmed that the earlier sown variety 45Y91 had deeper roots (Table 1) and increased water uptake from depth (data not shown), consistent with the 2018 results.

Table 3. Benefit of earlier sowing on the yield of hybrid varieties at two sites in 2019.

Agronomy to capture the benefits of deep water

Table 4 summarises the pros and cons of the various options to precede early-sown canola crops, highlighting that water is not the only aspect of the farming system influenced by crop choice.

Table 4. A summary of the impacts of different preceding crop choices to precede early-sown canola crops (the more stars the better for each aspect).

Agronomy to manage the legacy of dry soils after high yielding, early-sown crops

Early-sown, high yielding crops can leave a legacy of drier and N-depleted soils in seasons where the spring is dry. This was seen in 2018 and 2019 in much of southern NSW and northern Victoria (Figure 1). If subsequent rainfall during summer fallow is low, and fails to refill the soil profile, it may be necessary to reconsider the crop sequence plan, or the intended sowing date of subsequent crops, in order to avoid high risk scenarios.

A current farming systems project is investigating improving the management of legacy effects where a range of crop sequence choices are combined with early-and later-sown crops with different N management. This project is examining the productivity, profitability and risk of different management options. Table 5 shows the residual plant available water and mineral N to 2m depth following a range of crops at Greenethorpe in 2018. Early-sown winter canola had no plant available water left in the top 2m, while the other crops options had between 24 and 57mm of stored water left in the profile. Legumes also left a legacy of increased soil mineral N. The different rooting depth and water use patterns of these crops may provide opportunities to plan sequences where high value legumes can be grown in sequence with early-sown, deep-rooted grazing crops. Benefits include both capitalising on water and N left by the legume and reducing the risk of negative legacy effects after early-sown crops, by sowing a less water-demanding crop.

Table 5. Residual plant available water (mm) and mineral Nitrogen (N) (kg/ha) at harvest to a depth of 2m following a range of different crop options at Greenethorpe in the dry year of 2018.

On red loam soils in southern NSW, early-sown, slow-developing canola varieties have roots that grow deeply. These varieties can take advantage of deep soil water to produce more biomass and offer greater yield potential than faster maturing varieties sown later in the season — even in seasons with a dry spring. The notion that early-sown, vigorous hybrids may set themselves up to fail in a dry spring seems unfounded, at least when stored soil water is available at depth. The combination of early-sowing and hybrid canola was particularly successful at sites with a high proportion of fallow rainfall to in-crop rainfall.

Success with earlier-sown crops in the sequence requires management to increase the likelihood of deep stored water and N prior to these highly profitable crops, as well as attention to the legacy of drier, N-depleted subsoils that may follow. Strategies to be considered include; adjustments to crop sequence to utilise crops less dependent on deep water for yield (such as grain legumes of barley); or crops that provide grazing options on mixed farms. A greater awareness of plant available water throughout the cropping season provides the platform for better decision making.

The Optimised Canola Profitability project is a collaborative endeavour between GRDC, NSW DPI, CSIRO, SARDI and CSU. We thank Rod Kershaw (Greenethorpe) and Rob Gollasch (Wallacetown) for the use of land for field experiments, and the wider OCP Team for contributions to the experiments summarised in Figure 2.