Deeper roots may improve the water use of early sown canola

Optimising the sowing date of canola in specific environments is an important determinant of yield (Kirkegaard et al. 2016). A central theme of the Optimised Canola Profitability (OCP) project has been to evaluate interactions between sowing time and variety to determine the feasibility of earlier sowing of canola (early April), and to develop management protocols for optimal biomass to produce the most profitable crops. The Agricultural Production Systems sIMulator (APSIM) simulations from historical data predict higher yield potential for earlier sown canola in a number of locations in southern NSW, and many of the sowing date/variety trials conducted to date demonstrated that higher yields were achieved when canola was sown earlier than the traditional Anzac Day sowing window following good summer fallow management (Brill et al. 2015).

For a given environment, there is an optimum flowering window that minimises the combined risk of frost in crops flowering too early, and heat and water stress in crops that flower too late. Ensuring that flowering date is matched to the environment is essential to maximise yield (Lilley et al. 2015). Yield is also positively correlated with post-anthesis biomass production, so producing sufficient biomass for the target yield in the most cost-effective way will maximise profit potential with least risk.

However, there is a perception that excessive water-use by early-sown, high vigour hybrid varieties may reduce the water available during the critical period of flowering and pod-fill resulting in increased water stress and lower yields in low-medium rainfall environments in dry seasons. This also leads to conservative nitrogen (N) management on these crops. Experiments have been conducted to determine whether earlier-sown hybrids do suffer increased water stress compared to faster maturing hybrids sown later, and whether deeper rooting in earlier sown crops makes more water available to offset this risk.

Field experiments (NSW DPI and CSIRO) and a rhizolysimeter experiment (CSU) were established at Wagga Wagga and Greenethorpe in 2018 to study the physiological mechanisms that canola might employ to respond to water stress. Both field and rhizolysimeter experiments aimed to compare the water use patterns and root dynamics of an early-sown, slow maturing variety (Archer) with that of a later sown faster maturing variety (Nuseed Diamond). The experiments were planned to achieve the same flowering date for both varieties and involved both irrigated (Wet + 115mm) and non-irrigated (Dry) conditions. It was hypothesised that the differences in yield and biomass production were likely to be compensated for by changes in plant architecture and partitioning of yield components, and that earlier-sown crops would benefit from deeper rooting to access water under dry conditions. While the rhizolysimeter complex enabled detailed studies of root and water use dynamics, the facility did not allow for destructive measurements, such as biomass or root sampling. These activities/measurements were undertaken in the associated field experiments. The Wagga Wagga and Greenethorpe field experiments generated simular results and Wagga Wagga results will be the focus in this paper.

In the field, Archer was sown on the 4April following 10mm of irrigation applied through dripper lines to ensure even establishment, while Nuseed Diamond was sown on the 14 May, following a 14mm rainfall event on the 10-11 May. Fertiliser was applied at sowing (120kg/ha of mono-ammonium phosphate (MAP) (10% N), with a further 130kg/ha N applied between the 23March and 7June. There was approximately 100mm plant available water at sowing, and 170mm of rainfall between 4 April and 5 November, when harvest occurred. Irrigated treatments received an additional 115mm over three watering events, with the last (approximately 50mm) applied on the 13September, to coincide with the midpoint of the ‘critical period’ that extends from approximately 100 to 500°C days after anthesis (Biologische Bundesandstalt, Bundessortenamt and Chemical industry (BBCH)60), to ensure that final yields were representative of the yield potential developed during the vegetative phase.

To compare the water use efficiency (WUE) of the two treatments, water use was estimated from the time of sowing which defined the season length and potential evapotranspiration (ET). Seasonal WUE was estimated as yield/seasonal ET, where ET was the sum of [in-crop rainfall + irrigation + change in plant available water (PAW)], from the first time of sowing to harvest.

In both experiments, both varieties flowered (50% of plants with one flower open) within a common flowering window between 27 August and 3 September(Figure 1). 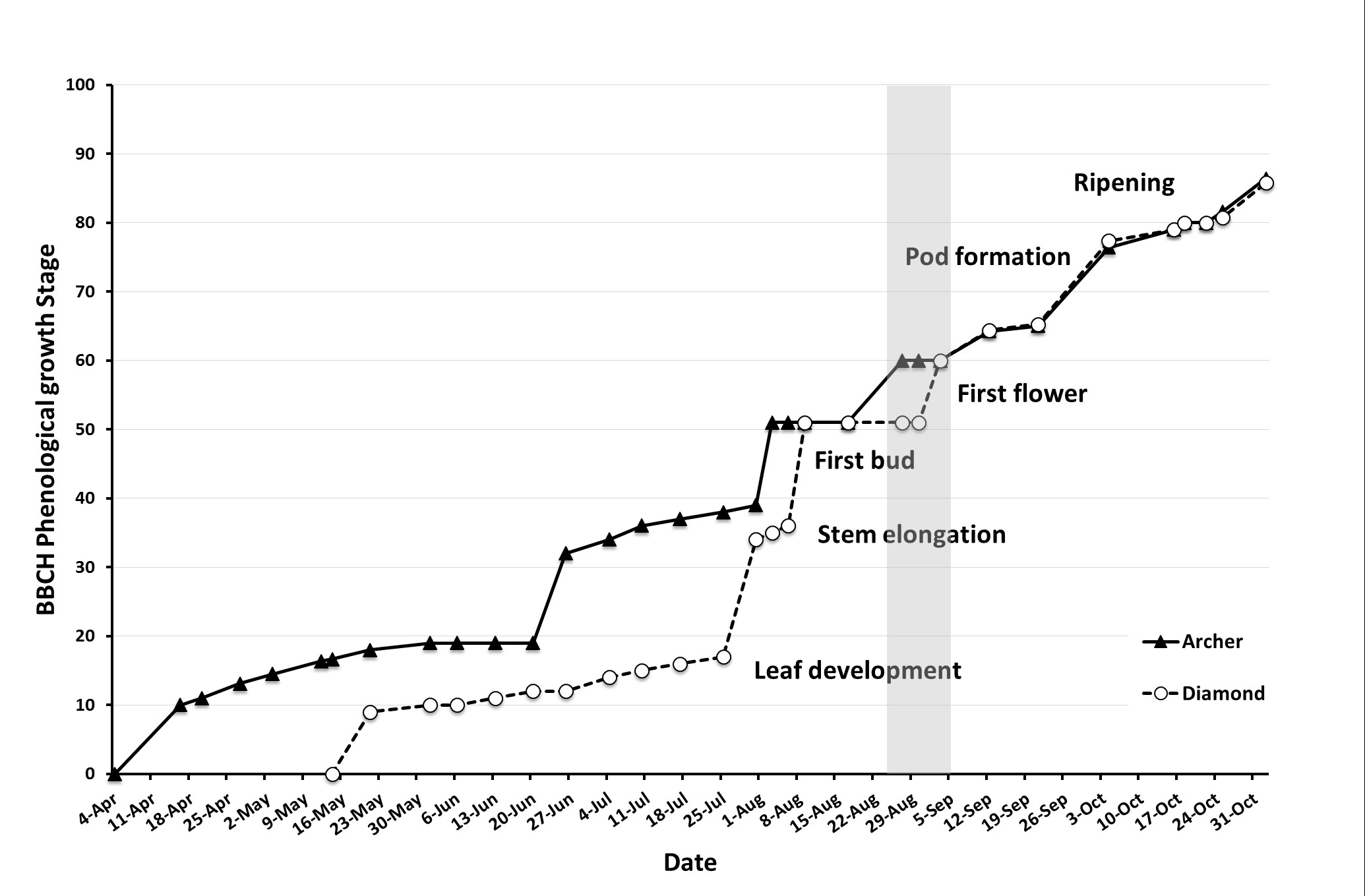 Archer sown early under irrigated conditions (Wet) yielded an average of 4.1t/ha compared to 2.8t/ha in the non-irrigated plots (Dry), while Nuseed Diamond sown late produced 2.9 and 1.9t/ha, respectively, for the Wet and Dry treatments (Table 1). Biomass production was positively correlated with yield. Archer sown early produced greater quantities of biomass than Nuseed Diamond both in Wet and Dry treatments, with consistent harvest index and water use efficiencies. In comparison, Nuseed Diamond was able to convert more of its biomass to grain, but given the later sowing date, could not generate the biomass necessary to match Archer for yield potential, even when grown under irrigated conditions (Table 1).

Table 1. Effect of time of sowing and irrigation on yield components and water use efficiency.

Comparison of soil water profiles for Wet and Dry treatments of Archer and Nuseed Diamond in the field at maturity suggested that both varieties were able to extract a similar quantity of water from the soil to the depth of coring (90cm). At 90cm, approximately 16mm of PAW remained in irrigated treatments, and approximately 3mm in non-irrigated treatments sown with Nuseed Diamond, which represented levels insufficient to account for the reduction in yield (Figure 2). 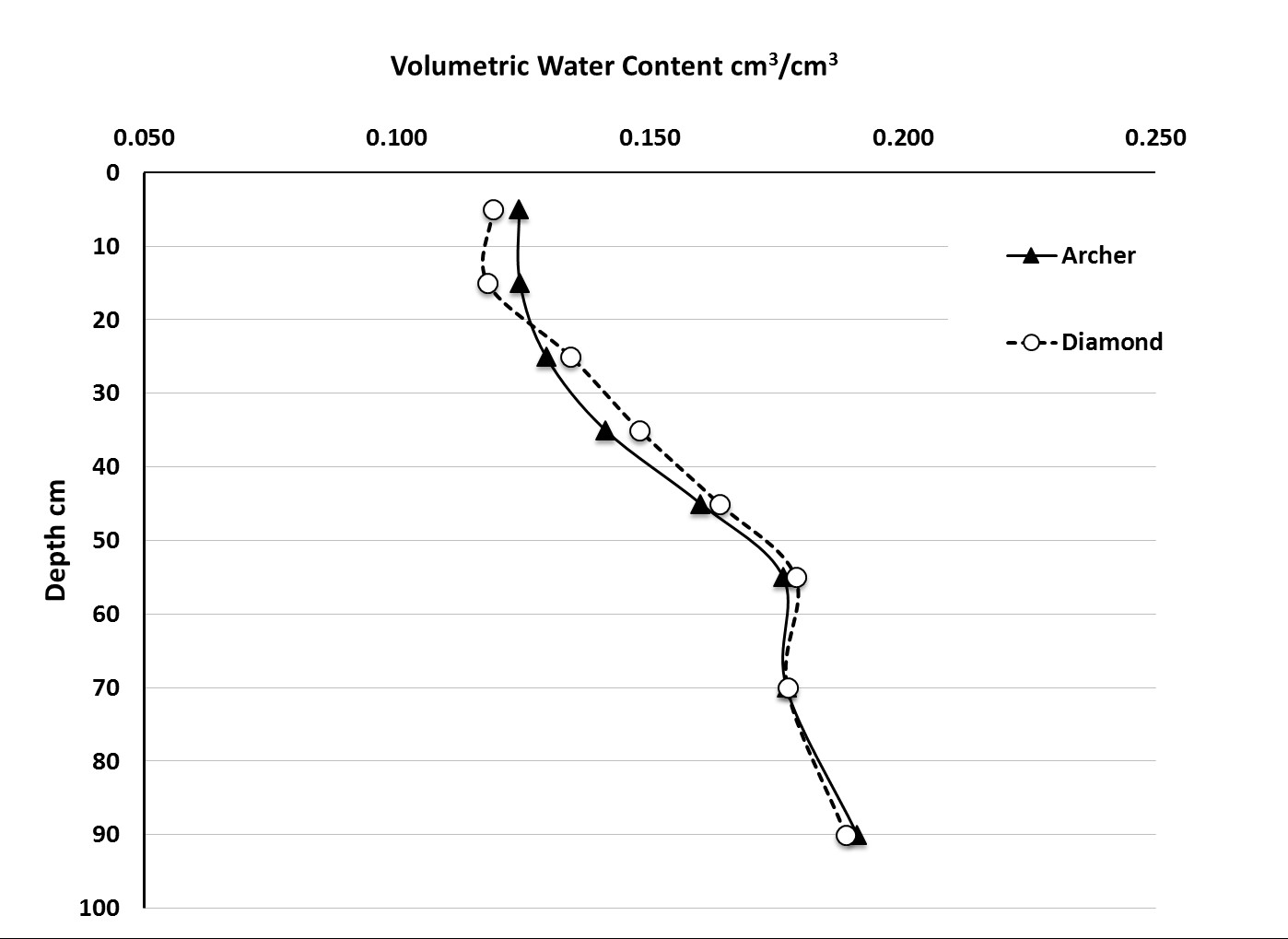 Figure 2. Soil water storage profiles of non-irrigated Archer and Diamond at maturity at Wagga Wagga in 2018.

To produce an additional tonne of yield per hectare, Archer must have had increased access to deeper stored water. Kirkegaard et al. (2016) hypothesised that aspects of early sowing such as increased access to deeper stored water due to a longer vegetative stage and deeper rooting may have some advantages for improving yield potential and water use efficiency. Although the field site at Wagga Wagga in 2018 had an impenetrable soil layer at 1-1.2m making deeper coring impossible, the root length density measured did confirm that Archer produced a greater quantity of roots per unit area of soil throughout the season (Figure 3). Figure 3. Root length densities (cm/cm3) of Archer and Nuseed Diamond in irrigated and non-irrigated treatments at Wagga Wagga in 2018. Bars represent standard error of the mean.

In the sister field experiment on a deep red Kandosol at Greenethorpe in 2018, Archer had roots that were 100cm deeper than Nuseed Diamond at harvest (3.2m compared with2.2m) and had extracted 35mm more water (Kirkegaard pers comm. 2019) demonstrating the likelihood that Archer was deeper rooted at Wagga Wagga. Archer’s increased rooting capacity was confirmed with the more detailed root measurements possible in the rhizolysimeter where Archer had consistently deeper roots than Nuseed Diamond at every growth stage recorded throughout the season (Figure 4), as well as greater root numbers (Figure 5). 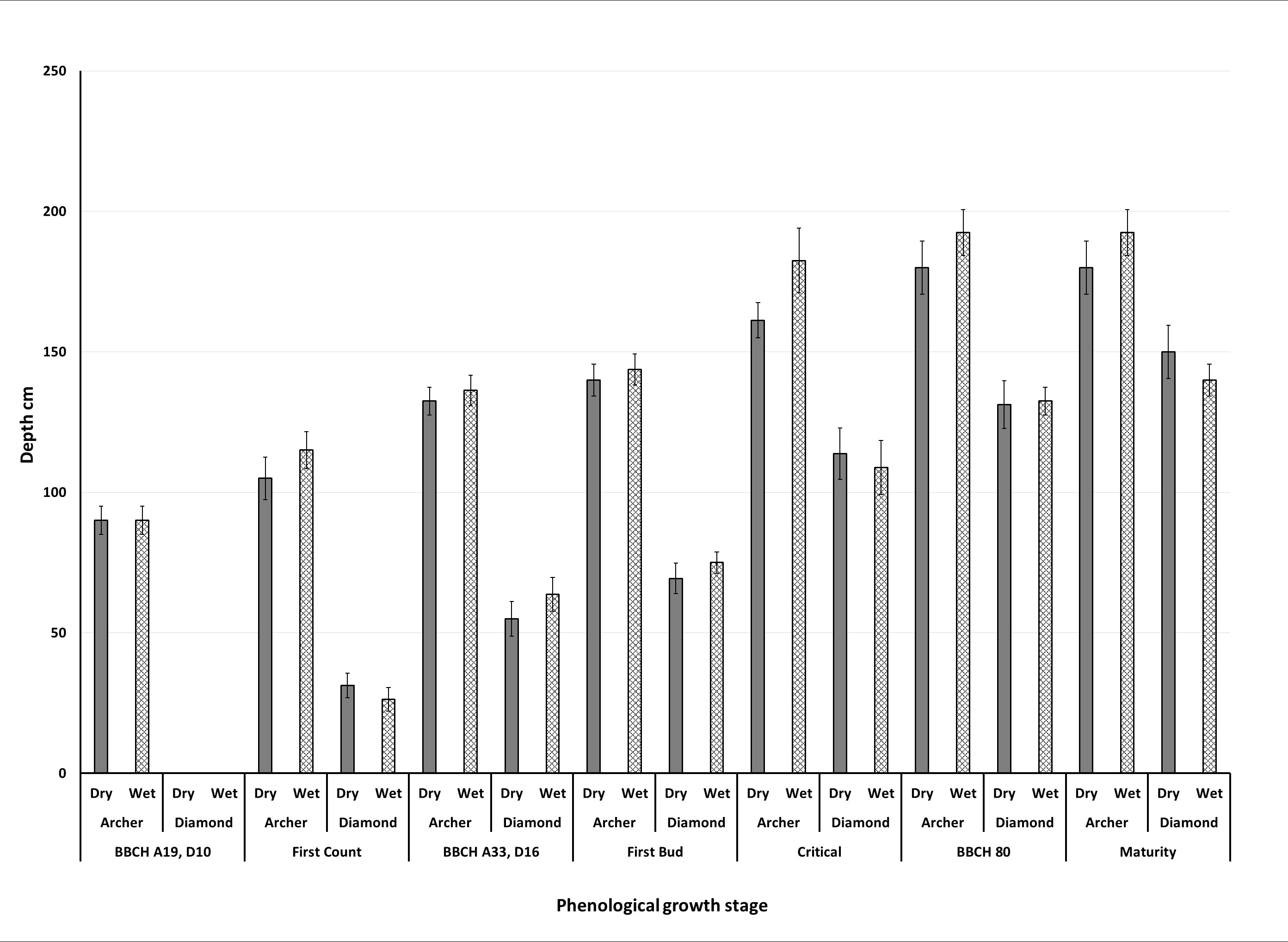 Figure 4. Average maximum rooting depths (cm) of Archer and Nuseed Diamond in irrigated and non-irrigated treatments in the rhizolysimeter trial at Wagga Wagga in 2018. Bars represent standard error of the mean. 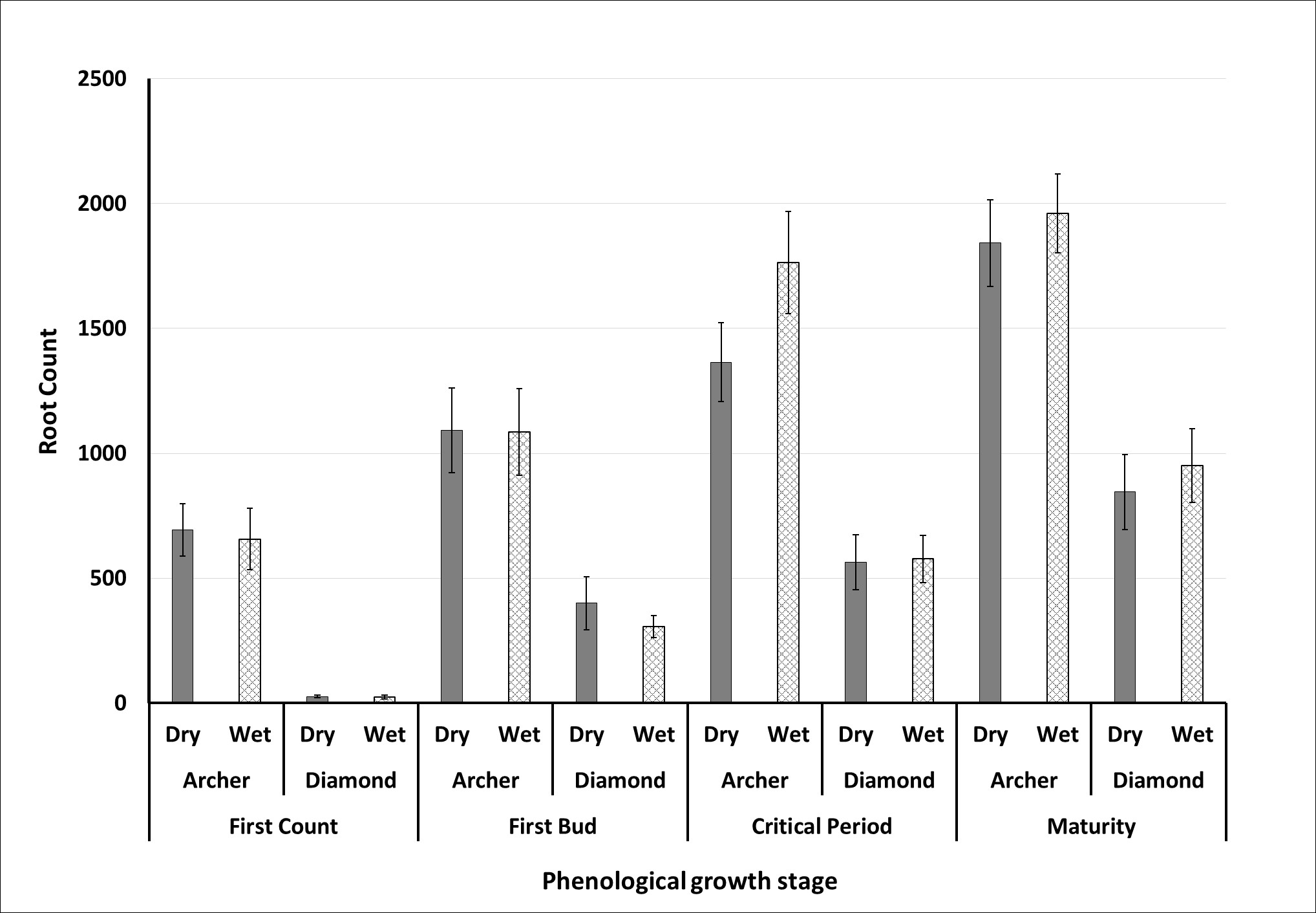 Figure 5. Average root counts of Archer and Nuseed Diamond in irrigated and non-irrigated treatments in the rhizolysimeter trial at Wagga Wagga in 2018. Bars represent standard error of the mean.

Given reasonable knowledge of the PAW prior to sowing, results from trials conducted in Wagga Wagga and Greenethorpe in 2018 suggest that in low to medium rainfall zones, early sown, long-season canola varieties are likely to produce more biomass and offer greater yield potential than faster shorter season varieties sown later in the season, even in seasons with a dry spring. The notion that early sown, vigorous hybrids may set themselves up to fail in a dry spring seems unfounded, at least when stored soil water is available at depth. In fact it appears that delayed sowing to gamble on additional rainfall with faster maturing, short season varieties seems more likely to result in a yield penalty as a result of a shorter growing season, constrained biomass production, shallower roots and lower water use efficiency.

The research undertaken as part of this project is made possible by the significant contributions of growers through both trial cooperation and the support of the GRDC, the authors would like to thank them for their continued support. The Optimised Canola Profitability project is a collaborative endeavour between GRDC, NSW DPI, CSIRO, SARDI and CSU. Thanks to Warren Bartlett, John Bromfield, Danielle Malcolm, Dylan Male, Patrick Hawkins Jr., Han Nguyen, Hang Nguyen, Jordan Bathgate and Melanie Bullock for technical assistance.