“Give me a break!” – Options for paddocks infested with both root lesion nematodes and Rhizoctonia solani AG8

Two-year rotation trials were implemented at Calingiri, Dumbleyung and Grass Valley to investigate the most effective and profitable break crops in rotation with cereals (wheat) for growers with RLN and R. solani in the same paddock.

Rhizoctonia solani AG8 (Rhizoctonia bare patch) is a fungal pathogen that causes root rot in several Western Australian crops and can cause significant yield losses; up to 50% in wheat (Table 1). Root lesion nematodes (RLN) can also cause significant crop yield losses; up to 40% in wheat (Table 1). For RLN alone, this equates to losses in WA of up to AU$90M annually in wheat crops (Brennan et al 2018; Murray et al 2009).  In WA, Rhizoctonia bare patch and RLN often occur together in the same paddock, making management more complicated. Therefore, it is imperative for grain growers in WA to have suitable crop rotations for these soilborne diseases.

The crop rotation trials were implemented using break crop options agronomically suitable for the Calingiri, Grass Valley and Dumbleyung regions (Table 2). The trial in Dumbleyung was a randomised block design with four replicates. In Grass Valley and Calingiri, there were six replicates for each treatment and for weed control purposes, treatments were grouped into blocks of broad leaf or cereals with a fallow plot (repeated herbicide applications) included in each block. Nitrogen fertilisers were only applied to the cereals and the canola. In 2019, the Dumbleyung and Grass Valley trial sites were over-sown with wheat varieties known to be susceptible to RLN (Chief CL at Grass Valley and Scepter at Dumbleyung). Total nitrogen applied to wheat at Grass Valley was 95 kgN/ha and at Dumbleyung, 65 kgN/ha. 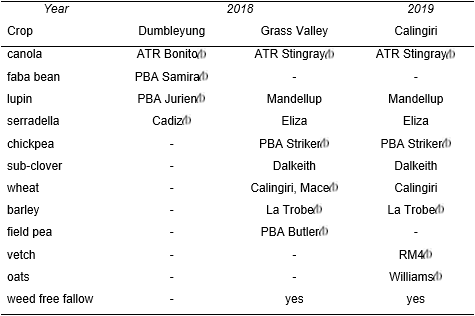 Table 3:  Pre-season nitrogen levels at Grass Valley in 2019 following a range of break crops grown in 2018.

At Grass Valley in 2019, the highest wheat yields were from plots that sown to serradella or kept fallow in 2018 (Figure 1). These yields were 79% and 98% higher respectively than the 2018 barley plots. Wheat grain yields in 2019 were significantly higher in all of the legume treatments than the cereal treatments and yield on the canola treatment was higher than on the 2018 barley and Calingiri wheat treatments.

Regression analyses demonstrated that low levels of P. quasitereoides (p=0.02) or high nitrate levels (p=0.001) at the start of the season were correlated with the higher yields. However, the levels of P. neglectus and R. solani at the beginning of the season did not correlate with grain yields. At Dumbleyung, the 2019 wheat yields on the 2018 serradella treatment were significantly lower by more than 1t/ha compared to the other three treatments (Figure 2) due to herbicide carryover from 2018 when serradella plots were sprayed with Spinnaker® herbicide and only 282mm rain was received between 1 May 2018 and 1 May 2019. This did not meet the requirement for Spinnaker® of 400mm rainfall before planting to cereals. There was no significant difference in yield in the treatments sown to canola and the pulses in 2018. 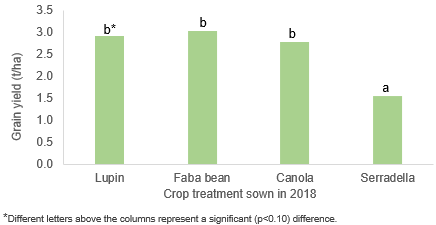 At Calingiri, yields were low for all crops in 2019 (Figure 3) reflecting the disappointing yields throughout most of the State (GIWA, 2019; Loi et al 2005). Vetch and sub-clover were not harvested for grain yield. Canola and chickpea yields were particularly poor which could have been due to the late sowing (June) of the trial or the impacts of RLN infestation.

Visual symptoms of RLN and Rhizoctonia in plots were obvious in cereals at all three sites during the 2019 season. Symptoms included chlorotic plants, stunting and patching.

At the start of the growing season in 2019, the root lesion nematode numbers were lowest in the plots sown to lupin and field pea or fallow in 2018 (Table 5). At harvest, the lowest amount of P. quasitereoides was in the plots sown to serradella, subclover and lupin in 2018 and the highest amount was in the 2018 canola plots. At the end of the season, there was no significant difference in the final numbers of P. neglectus.

P. neglectus levels at sowing and harvest in 2019 were at least three times higher in the 2018 canola plots at Dumbleyung than the faba bean and lupin plots. Serradella had higher P. neglectus levels at the end of the season than faba beans and lupins but levels were not as high as those in canola (Table 6). There were no differences in R. solani levels between the four treatments in the 2019 growing season.

Table 6. Pratylenchus neglectus (RLN/g soil) and Rhizoctonia solani AG8 (log pgDNA/g soil) levels from the start of the season (Pi) and at harvest (Pf) of wheat grown at 2019 at Dumbleyung.

In general, RLN levels were lower under fallow, pulses and pastures and higher under cereals and canola. After the Grass Valley site was over-sown with wheat in 2019, the 2018 pasture, pulse and fallow treatments all yielded more than the 2018 cereal treatments and the higher grain yields were correlated (simple linear regression) with low levels of P. quasitereoides at the start of the season. The highest levels of P. quasitereoides and P. neglectus at harvest in 2019 wheat plots were recorded from 2018 canola treatments at Grass Valley and Dumbleyung, respectively.

In general, subclover and lupin rotations were the most consistent break-crop options where R. solani and RLN were present in the same paddock (Grass Valley and Calingiri trials). Serradella consistently performed as a suitable break to reduce P. quasitereoides but its ability to reduce P. neglectus and R. solani levels was more variable. Fallow, pulses and pasture rotations generated the highest yields in subsequent wheat crops. Canola is not a suitable break where RLN and R. solani occur together. In 2020, wheat will be sown over the trial at Calingiri to further validate these findings.

These results demonstrate that growers need to be aware of which nematode pests and soil-borne diseases are present in problem paddocks so that suitable rotations can be implemented to mitigate potential yield losses.

Loi, A., et al., (2005) A second generation of annual pasture legumes and their potential for inclusion in Mediterranean-type farming systems. Australian Journal of Experimental Agriculture 45, 289-299.

Funding for this work was provided by DPIRD and GRDC. Our thanks to Grace Williams from Kalyx and the DPIRD Northam and Katanning RSU’s, particularly Rob de Gruchy, Daron Malinowski and Daniel Cox for trial management. Andrew van Burgel assisted with the trial design. Kanch Wickramarachchi, Pete Gray, Isaac Duval and a team of casuals provided technical support. The growers Brendan Parker (Grass Valley) and Glenn Ball (Dumbleyung) and Steve woods (Calingiri) provided their paddocks for the trials and we would like to thank them for their cooperation and continued support.