Four introduced snail species of European-Mediterranean origin remain a significant challenge for grain growers; the vineyard or common white snail, Cernuella virgata, the conical snail, Cochlicella acuta, the small pointed snail Cochlicella barbara, and the white Italian snail, Theba pisana. These species are advantaged by modern low-disturbance farming systems and pose an increasing market access threat. Over the past six years, GRDC investments (DAS00134 and DAS00160; led by SARDI) have aimed to improve snail management with a focus on molluscicidal baiting (products, rates, timing), evaluation of novel molluscicides and improving the parasitism success of the introduced parasitoid fly, Sarcophaga villineaveana, against the conical snail (CSE00061, CSIRO/SARDI). This work has provided guidelines to improve snail control using baits. However, further development of integrated controls is still required and is becoming more feasible with new technologies. Provided in this paper, is a brief overview of key learnings on snail management from recent projects and new directions for snail research and development.

Australian grain growers are heavily reliant on a single molluscicidal active ingredient, metaldehyde, for snail control. This molluscicidal is marketed under various product formulations with different pellet characteristics (for example bran or flour-based pellets) and concentrations of active ingredient (ranging from 1.5 to 5% a.i. metaldehyde). Iron chelate (iron EDTA complex) has an alternative mode of action and is less common in baiting programs which is possibly due to its higher cost.

Baits are not considered attractive to snails, and therefore, efficacy relies on snail movement activity and sufficient pellet densities to ensure active snails encounter pellets and consume a lethal dose. During 2014 and 2015, SARDI conducted field arena trials investigating bait efficacy for two metaldehyde products (Metarex® and Meta®) and one iron-chelate product (Eradicate®) for different snail species at a range of snail densities. Snails were placed in the field within 0.2m2 bare earth arenas at one of five densities (40, 80, 160, 320, 640 snails/m2) and exposed to one of five treatments (nil and 4 different pellet densities).

Pellets are considered a superior bait form compared with sprays for molluscs; they have the advantage of persisting in the field during periods of inactivity. One drawback is that successful baiting requires an element of prediction; baits must be appliedjust before prolonged periods of snail activity (driven by weather conditions) to ensure pellet encounter. Additionally, baiting aims to control populations by knocking out mature snails before significant reproduction has occurred.

Since 2017, a GRDC project (DAS00160) led by SARDI together with DPIRD, has investigated the seasonal activity patterns of snails with respect to weather, in order to improve prediction of optimal bait timing. Eight field sites were established across Western Australia (WA) and South Australia (SA). Approximately 45 snails were collected at monthly intervals and dissected to determine their reproductive status. Time lapse video was used to monitor snail movement continuously together with logging of climate variables.

The work has found:

Figure 2. The seasonal reproductive cycle of common white snails at Palmer SA, shown by changes in the size of albumen glands over time. Each point represents one snail. 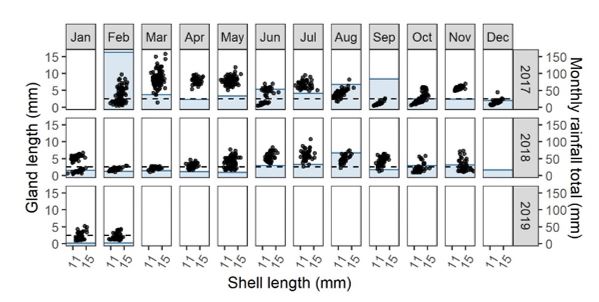 Figure 3. The seasonal reproductive cycle of common white snails at Gairdner WA together with total monthly rainfall (shading). Note that gland enlargement commenced in February of 2017 coinciding with high summer rainfall, compared to May of 2018 coinciding with a dry start.

In recent years there has been more interest in baiting opportunistically during late summer following rain events. To investigate the possible effects ‘baiting opportunistically’ has on bait persistence, laboratory assays were conducted to test efficacy of baits exposed to ultra violet light (UV), high temperatures and rainfall. In each trial, eight pre-exposed baits were placed into arenas with five white Italian snails for three days and snail mortality recorded after eight days.

Between 2015 and 2016, numerous potential molluscicides have been evaluated on snails in the field and laboratory. Tested products have included: Copper oxychloride, Copper oxide (Cu2O), Copper sulphate (CuSO4), iron sulphate (FeSO4), paraquat, diquat, omethoate, thiodicarb, caffeine, UAN, Perlka®, methomyl, carbendazim and Bacillus subtilus. Unfortunately, these products all gave nil or low or highly variable (carbendazim) effects on snail mortality. Usage of the fungicide carbendazim, against snails has increased in recent years, but growers must strictly adhere to registered crop situations to avoid chemical residue violations and market access risks. The above-mentioned products are only to be used in accordance with the label Directions For Use including the crop, rate and all WHPs being followed.

In the hope of discovering a new control tool, any suggestions or observations regarding other novel molluscides are welcome.

Biological control of the conical snail

A parasitoid fly, Sarcophaga villeneuveana, was imported from Europe, reared at SARDI and released in SA during 2001-2004 at 21 sites (19 on Yorke Peninsula and two sites on the Limestone Coast) to control the conical snail , C. acuta (Leyson et al.2003; Hopkins 2005; Coupland & Baker 2007). The fly has established on Yorke Peninsula, but has only dispersed approximately 20km from its original release sites on the southern ‘foot’, and it displays low parasitism rates (0-25%) (Muirhead, Brodie, Baker and Perry, unpublished). Under a current GRDC investment (CSE00061, CSIRO, SARDI), a geographic strain of the fly that is better matched genetically and climatically to C. acuta in Australia, was imported in early 2020 for host specificity testing which will be followed by a rear-and-release program in snail-affected regions.

Baiting programs can be optimised by achieving adequate pellet densities (30 to 60m2), monitoring the effectiveness of spreader settings and taking care to minimise bait degradation before snails encounter them by avoiding high temperatures or significant rainfall. The science is providing a sound, evidence base which is reinforcing best practice management (for example; baiting causes higher mortality earlier in the season, and therefore, avoid spring baiting). It is expected that a better predictive ability around the optimal conditions for baiting will be gained on the completion of DAS00160 (March 2020). Baiting is a crucial management tool, but it often does not achieve high order control Therefore, continuing to implement and develop other integrated strategies remains important.

Future risks for the industry include the tightening of delivery standards for snail/grain contamination for export markets and the heavy reliance on a single molluscicide active ingredient (regulatory risks and potential for resistance to evolve). Behind the scenes, researchers, growers and funding bodies around Australia are working together to identify and integrate new technologies that can provide transformational change for snail control in modern farming systems (Perry 2018, Perry et al. 2019). In the foreseeable future, new system’s approaches involving biological, sensing and mechanical solutions are likely to be required to meet the challenges posed by snails.

Much of the project work under DAS00134 and DAS00160 was undertaken with the leadership of Dr Michael Nash (formerly SARDI). We thank him for the establishment of these projects.

We also acknowledge the contribution of Michael Richards (formerly NYNRM) who initiated the use of time-lapse cameras to spy on snails and assisted with the establishment our own monitoring sites.