The key message from the system research is that no single irrigation system suits every situation. Selecting and optimising the system for your farm and water reliability is the most important priority.

System choices will be impacted by water reliability, labour resourcing as well as topography and soil type.

The primary focus areas for enhanced irrigation performance are:

The Smarter Irrigation for Profit Phase 1 (SIP1) project enabled the completion of valuable research in areas including irrigation system audits, irrigation scheduling, investigation of new technology, evaluation of system design and water use efficiency. The project demonstrated that improved water productivity hinged on ‘getting the basics right’. It found that participating Australian irrigators could achieve a 10-20 percent improvement in farm profitability by adopting best practice and precision irrigation technologies. This initial project has now led to phase 2.

Smarter Irrigation for Profit Phase 2 (SIP2) is a partnership between the major irrigation industries of cotton, dairy, sugar, rice and grains research organisations and farmer groups. The objective of SIP2 is to improve the profit of over 4,000 cotton, dairy, rice, grains and sugar irrigators.

This paper draws on some of the findings from SIP1 and SIP2 which will help inform grain growers of the importance of optimised irrigation to maximise irrigation water use efficiency and profitability.

One of the optimised irrigation sites is located on the property “Keytah” near Moree, where over the last ten years an irrigation system comparison trial has been running. The comparison includes examples of siphon, bankless channel, lateral move, and subsurface drip, and has focused principally on cotton irrigation, although the lateral move has also been used to provide supplementary irrigations to cereal and chickpeas. The system comparison trial investigated performance on both a yield and gross production water use basis.

Overhead irrigation: water applied via lateral move or centre pivot irrigation systems where water is applied over the top of the crop.

Subsurface drip: water applied via a drip tape buried in the soil.

Key points to note about the trial

The trial includes a range of seasonal conditions including 2011-2012 where there were two major flood events, and 2013-2014 where there were hot dry conditions with minimal in crop rainfall during the cotton growing season. The performance of the siphon and bankless channel fields may have been impacted by variables such as flooding (siphon 2011-2012) or poor establishment due to surface crusting which meant the field had to be replanted 20 days after other fields in the trial (bankless 2009-2010), so results for these seasons should be viewed with this understanding.

The 2017-2018 season was the first set of data for the Smart Siphon (a remote-control siphon system), while the four previous seasons were irrigated with traditional siphons. Indications are that more uniform application from the smart siphon may improve performance, but additional data needs to be collected before any conclusions can be made.

The trial has not found that there is any one system ideally suited to every season. Figure 1 combines the yield data for the five years of the trial. There was 1.16 bales/ha difference between systems and 3.4 bales/ha difference between season. This suggests that optimising the system for the prevailing conditions is critical for producers aiming to improve productivity and ultimately profit. 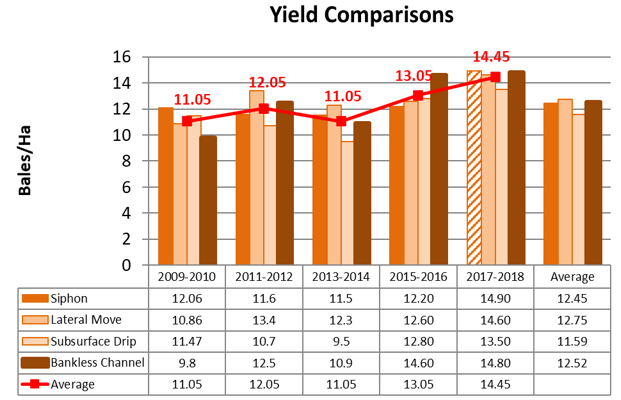 In the wet 2011-2012 season it was easier to manage irrigation volumes and minimise waterlogging despite extreme rain events with the lateral move. In contrast in the hot dry 2013-2014 season, irrigation scheduling needed to be intensely monitored to ensure crop water demands were met, especially with the overhead lateral move and drip systems. Having these systems set up with the appropriate system capacity, and attention to repairs and maintenance is essential, as any breakdowns where application volumes are just meeting crop requirements  could have dramatic consequences.

In addition to yield, the project considered the water use efficiency of the systems. The metric used was Gross Production Water Use Index (GPWUI) which includes measures of area, yield, irrigation water applied, used soil reserves and the in-season effective rainfall. GPWUI provides the most realistic index to make comparisons between systems and between seasons. The higher the GPWUI, the more productive all water used by the crop has been. The average GPWUI over the five seasons varied from 1.06 bales per megalitre (ML) in 2013-2014, a warm to hot season with almost no rainfall, to 1.50 bales per megalitre in 2015-2016, a more typical season. There were similar trends in the individual systems over each of the seasons, except in 2011-2012, where the lateral proved to be a standout in a wet overcast season.

Variation between seasons (0.44 bales/ML) have been found to be greater than the variation between systems (0.11 bales/ML). This reaffirms the yield findings, as optimising the irrigation system and management for the seasonal conditions is going to be the best way to enhance productivity and profitability.

The commercial research into automated siphons and automated bankless channel systems is continuing at Keytah in 2020-2021 as part of SIP2.

The key message from the system research is that no single system suits every situation. Selecting and optimising the system for your farm and water reliability is the most important focus for irrigators. Surface irrigation systems such as siphon, small pipe through bank or bankless channel (siphon-less) typically entail lower capital to set up, although bankless designs can involve significant earth movement. Irrigators who have low water reliability will tend towards lower capital cost systems such as the traditional siphon but will then have high labour resourcing costs during operation. Those facing difficulty with labour resourcing have tended to transition towards bankless channel or siphon-less systems. Additionally, some producers have made investment in automated siphon systems to manage labour resourcing challenges. Where water reliability is higher, investment in overhead or drip systems is more feasible as the initial capital costs can more easily be recouped over a greater number of productive seasons.

In recent years there has been more detailed investigation of siphon-less or bankless channel systems. In 2018-2019 the GVIA (supported by the CRDC) worked with NSW DPI and CottonInfo to host a Siphon-less field day and developed a siphon-less booklet, which includes case studies of various designs being utilised by producers. To date however, we have limited information on the water use efficiency of the large number of designs being utilised by producers. The Smart Irrigation project being managed by Deakin University as part of SIP2 is utilising wireless sensor networks to collect field and crop data in bankless channel systems. Linkages between sensors, forecasting systems and automated irrigation infrastructure will enable precise delivery of water to crops as and when required.  This will support irrigators to maximise productivity of water and optimise labour resourcing in these systems.

There are two commonly recognised configurations which utilise permanent small pipe through bank; the Waverley double head ditch design, and the smart siphon.

Both these small pipe through bank set ups can be initially installed as manually controlled systems, with the potential to transition to more automated or autonomous control over time. There have been continuous improvements in the cost and availability of connected sensor technologies for remote monitoring of irrigation, and improved measurement will inform management, allowing better use of valuable water resources for agricultural production. Commercial scale deployment of remote-controlled furrow irrigation is now common for less than $800/ha. Furrow irrigation optimisation under the USQ project has shown an average 10 to 15% water saving per irrigation event.

Overhead and drip systems readily lend themselves to optimised application through remote control, automation, and autonomous irrigation. Care must be taken to ensure that the managed system capacity is sufficient to deliver to the peak crop water demand. For optimised irrigation it is also essential to conduct regular system audits to ensure accurate application and even distribution across the whole system.

In addition to the investigation of autonomous furrow irrigation, the USQ SIP1 and SIP2 projects have also investigated autonomous broad-acre pivot irrigation systems for cotton and dairy pasture. The autonomous pivot cotton project is at Jondaryan on the Darling Downs. It involves ongoing development of VARIwise cotton yield prediction. VARIwise controlled cotton irrigation has led to a 6% yield improvement and 14% more efficient water use. The VARIwise Yield Predictor has regularly predicted final cotton yield to within 3% of actual yield six weeks prior to picking.

These overhead or drip systems do work well for opportunistic irrigation of either summer or winter cereals. This is especially true for lateral moves, as the crop is generally planted on the flat, meaning there is no requirement to adjust land preparation techniques to transition from cotton to a cereal. Keytah has utilised the lateral, to supplementary irrigate cereals and a chickpea crop.

Monitoring of commercial irrigated cereal crops in the Murray and Murrumbidgee Valley’s over three years from 2014-2016 found that 38% achieved at least 80% of their water limited yield potential. Grower surveys found that average and ‘best ever’ yields in 2015 were 5 t/ha and in 2016 7 t/ha, 25% of those surveyed reported best ever yield approaching the calculated mean physiological potential of 9 t/ha.

Observations from this monitoring showed that management issues such as waterlogging or water stress at flowering coupled with seasonal conditions, including high temperatures or scalding from water being present during warmer conditions, may have contributed to crops not reaching their full water limited yield potential. Wetter years, or seasons with milder conditions during grain fill seem to produce higher yields.

This project includes four key learning sites at Condobolin, Kerang, Darlington Point and Finley. The project is looking at a range of irrigated cropping systems to investigate options to maximise profit per megalitre.

Results from the 2019 winter season at the Irrigated Cropping Council (ICC) site near Kerang provided information on different irrigation approaches and different wheat varieties. The irrigation approaches included were one spring irrigation, a pre-irrigation followed by one spring irrigation, a full spring irrigation consisting of three applications and a pre-irrigation followed by three in-crop irrigations. There were some varietal differences, and the conclusion was that the best result was from the first irrigation in spring, however it was important that the crop was sufficiently developed, either with adequate biomass or tiller numbers to respond. The irrigation had to be timed to crop growth stage and the crop not subject to moisture stress. The decision on whether to pre-irrigate or not and on how many in-crop irrigations are justified will be impacted by water availability, price and seasonal conditions.

Getting the basics right

Getting the basics right was one of the take home messages associated with SIP1. As a general rule, there is always opportunity to make improvements to irrigation performance, this entails some key steps.

With overhead or drip systems, growers should perform regular audits to check application uniformity, and system capacity. Couple this with regular repairs and maintenance to pumps, supply lines and filters to maximise irrigation water use efficiency. The audits conducted as part of SIP1 showed that many irrigators could save money and improve productivity by running periodic checks or audits and giving attention to maintenance.

Start and stop surface irrigation events at the right time, avoid stressing the crop from too much or too little water. Monitor the supply head height to ensure even flow rates from siphons and check siphon placement is uniform so that flow rates are more consistent.

Very often the use of sensors such as soil moisture monitors, channel level sensors or water advance systems will help inform these decisions and are invaluable in the process of optimising irrigation systems. Investment in automation or autonomous systems are further steps that will allow easier optimisation of every irrigation event.

This project is supported by the CRDC and the GRDC, through funding from the Australian Government Department of Agriculture, Water, and the Environment as part of its Rural R&D for Profit program and NSW DPI, GVIA, USQ and Deakin University.

ICF00008: Soils under an irrigated environment

CSA00017: Achievable yields for irrigated grains in the northern region