Summer crops are becoming an increasingly important component of cropping systems in the summer-dominant rainfall zone. They are often useful for providing disease or weed management benefits when in rotation with winter crop dominated systems. While it is widely recognised that summer crops are often critical for improving the system sustainability, a key challenge is transitioning between summer and winter crops or phases in the crop sequence. This requires either double cropping or introducing long-fallows (>10 months) during transitions between the summer and winter crop phases. Hence understanding how effectively different summer crop options convert available water into grain yield and ultimately profit is critical to making better decisions about when summer crops may be used in the crop sequence. Further, differences in water extraction, subsequent fallow water and nitrogen accumulation are likely to influence how subsequent crops will perform or the period of fallow time required to reach critical sowing moisture levels. So, it is important to target the right summer crop option to the system.

This paper will report on several comparisons of relative water use efficiency of different summer crops, and effects of summer crop management practices (e.g. soil water at sowing, sorghum configuration and density) and their legacy impacts in the farming system.

Over the past 4 years of experiments, different summer crop options have been grown in the same season and under common previous fallow length and starting moisture. Using this data, we have calculated for these various comparisons the crop water use efficiency as $ of income generated per mm of crop water use. This was done using long-term median crop prices and inputs for each of the crops, but these relative values would shift if prices for individual crops were more/less favourable compared to others.

Across a range of seasons and growing conditions, sorghum always exceeded mungbeans in terms of $ generated per mm. This was even though on several occasions mungbean crops use less water and often left significantly more residual soil water than the sorghum crops grown in the same conditions. Sorghum was only bettered in terms of crop WUE by a cotton crop at Pampas in summer 18/19 and sunflowers when they were sown as a double crop in 17/18.

Figure 1 shows the relationships between crop water use and crop income generated for 100 summer crops (sorghum, mungbean, cotton, sunflower and maize) that have been grown in our farming systems research over the past 5 years. This graph demonstrates that: 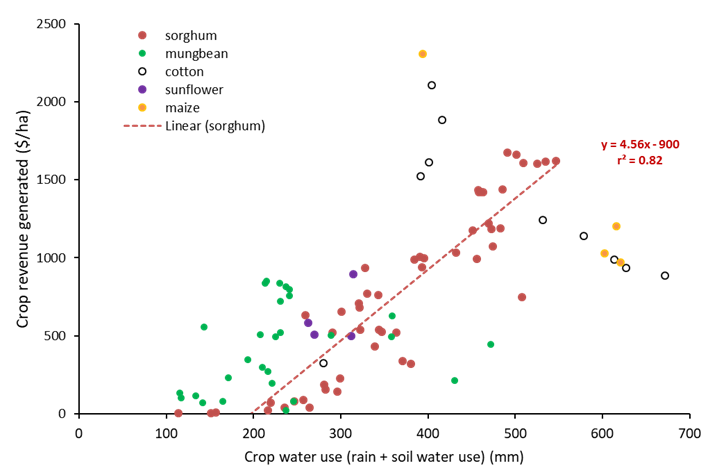 Soil water at sowing is critical for driving the efficiency of summer crops, especially sorghum. Here we compare the performance of sorghum crops grown in the same season with common nutrient and crop management but with significantly different soil water at sowing (Table 2). As expected, crops with higher soil water at sowing had higher grain yields. But, perhaps something less obvious was that the crops with more staring water regularly converted the available soil water more efficiently into grain and accordingly into profit. This effect was larger in seasons with limited in-crop rain, while the effect was diminished in the wetter growing season (i.e. Pampas 2016/17). This phenomenon occurs because it takes a critical amount of water to grow crop biomass, and hence when there is less available water at sowing there is less water left to efficiently convert any residual water into grain during grain filling. Hence, in wetter seasons this is less pronounced because the crop may still have enough available water to minimise this effect.

Across these studies we calculated the increase in crop return that was obtained for each extra mm of soil water available at sowing. While there was some variation in some seasons, this could be as high as $70 extra return per extra mm at sowing. These effects were largest where crops were sown on marginal soil water (< 100mm) and had limited in-crop rain (e.g. <300mm). These data clearly suggest that for sorghum to maximise its return per mm of water used, higher soil water at sowing is critical. Other analyses by Erbacher et al. (2020 Goondiwindi update paper), suggest plant available soil water at sowing of 150mm was required to optimise sorghum WUE.

Integrated weed management practices involving greater in-crop competition with summer grass weeds is seeing interest in increasing sorghum density and narrowing row spacing. In addition to this weed benefit this is likely to have impacts on water and nutrient use efficiency of the crop and legacy impacts on subsequent water and nitrogen accumulation in fallows. It was hypothesised that the higher density sorghum would grow additional biomass which may or may not be converted into grain yield depending on the season. However, this greater biomass would contribute to greater and more even ground cover and improved fallow efficiency. Similarly, this may have impacts on nutrient cycling due to increased immobilisation of soil N from the higher residue with a high C:N ratio.

Across the 3 experimental comparisons we have implemented in our farming systems research, we found that consistently the higher density sorghum increased biomass production, but this was only translated into additional yield at Emerald in 17/18 (Table 3). At the other sites there was no significant yield penalty from growing this additional biomass and grain yields were comparable. Soil water extraction and crop water use was the same amongst the high and low density crops.

The higher biomass production in the higher density sorghum crops has required higher soil N extraction without an increase in grain yield and N. Hence, the nutrient use efficiency of these crops is lower. That is, such higher density crops will require a different nutrient strategy to ensure sufficient N in provided to maximise their yield potential.

Finally, while we anticipated there may be some benefits for improved soil water accumulation over the subsequent fallow following the higher density sorghum crops this was not shown resoundingly. In one season (Pampas 17/18) we did observe an extra 33mm was accumulated in the subsequent fallow after the higher density sorghum crop than the standard management. However, this was largely due to a drier soil profile at crop harvest and there was no significant difference in soil water at the end of the subsequent fallow in any of these cases. However, observations suggested there was greater uniformity of the soil water where more evenly distributed cover occurred following the narrower sorghum rows compared to wider row crops.

Finally, here we make comparisons of the impacts of summer crops on residual soil water, accumulation during the subsequent fallow and effects on subsequent crop productivity in the sequence.

From these comparisons the legacy impacts of cotton in the farming system are clear, with lower soil water available for subsequent crops due to higher extraction and also lower fallow efficiencies (Table 4). This has translated into reductions in yield of 0.5 t/ha in sorghum and 0.3 t/ha in mungbeans when sown following cotton compared to maize.

Comparisons of sorghum with mungbean show little differences in residual soil water or soil water in the following crops. However, mungbean performance was affected by the preceding crop. ‘Mungbean after mungbean’ yield was 0.5 t/ha lower than ‘mungbean after sorghum’, despite starting with similar moisture after a long fallow (17/18). In contrast, mungbean yields were similar following short fallows out of sorghum and mungbean (18/19), even though the sorghum left less residual water. These effects are likely to be related to disease reductions rather than soil water or nutrient impacts.

Finally, a comparison between sorghum and sunflower legacy effects found little or any effects on subsequent fallow water accumulation or crop yields.

The research undertaken as part of this project is made possible by the significant contributions of growers through both trial cooperation and the support of the GRDC, the author would like to thank them for their continued support. We would like to thank the project teams and collaborators contributing to the management and implementation of the farming systems experiments across the northern region.