Mung bean is an important summer pulse crop, with an estimated farm gate value of approximately $100 million each year. The advantages of integrating mung bean into cropping systems include its ability to fix nitrogen (N) and the added benefit as a water efficient, short season high value crop. The variety Jade-AU has a market share of approximately 60% of mung bean produced in the region (Col Douglas pers comm). Economic reduction and loss of yield in mung bean in the northern grain region can be attributed to bacterial and fungal pathogens causing diseases such as tan spot, halo blight, powdery mildew and other constraints such as nodulationfailure (Murray & Brennan, 2012).

Arbuscular mycorrhizal fungi (AMF), previously known as vesicular arbuscular mycorrhizal fungi (VAM) are beneficial organisms found associated with the roots of 80% of terrestrial land plants including many agriculturally important crop species. They form a symbiotic relationship, exchanging the plants photosynthetic carbon for improved uptake of water and nutrients such as phosphorus (P) and zinc (Zn) from the soil (Parniske, 2008). They may also play a role as bio-protectants against fungal, bacterial, and nematode pathogens (Yang et al., 2014). There are many species of AMF fungi, which for diagnostic purposes are categorised into seven molecularly distinguished groups.  Group A, which includes the species Funneliformis mosseae and group B, which includes the species Claroideoglomus etunicatum are commonly found in the northern grain region. Spore levels of AMF in the soil are higher following mycorrhizal crops than fallow or non-mycorrhizal crops like canola. Some crops have a higher mycorrhizal dependency for growth such as sorghum, maize, sunflower, faba bean, linseed, chickpea and mung bean than others such as barley and millet. Crops grown in soils with low levels of available phosphate are dependent on AMF for nutrient acquisition (Smith & Read, 2010) and for highly dependent crops extremely high rates of P fertiliser are required to offset lack of AMF.

Rhizobia are bacteria that form a symbiosis with legumes to fix N gas from the air into ammonium. The role of rhizobia in N fixation is well known and inoculation of legumes with rhizobia is currently practised in agriculture worldwide. Mung bean has the capacity to meet the N requirements for growth and yield through biological N2 fixation (Gentry, 2010). However, previous surveys undertaken in the northern grain region indicate that the majority of mung bean crops are poorly nodulated and fix only 30% of their requirements for N (Herridge et al., 2005). Nodulation failure is a constraint to mung bean crop production that can lead to yield reductions of up to 50% (Gentry, 2010).

Nodulation failure can be ascribed to various reasons, such as incorrect inoculum application, unsuitable soil pH, high levels of soil nitrate, and deficiencies of nutrients such as phosphorus and molybdenum (Drew et al., 2012). Limitations of certain nutrients including phosphorus, calcium, boron and magnesium can affect the development and functionality of nodules and therefore productivity of the leguminous crop (O’Hara, 2001). Synergism between rhizobia and AMF can increase mineral nutrition and plant growth, nodulation levels and N fixation in other legumes (Javaid, 2017). Our hypothesis is that one cause of nodulation failure of mung bean in the northern grain region could be a lack of AMF propagules in the soil.

Also found in the soils of the northern grain region are root-lesion nematodes, Pratylenchus spp., which feed in and migrate through root tissue, negatively affecting root function and can lead to yield loss in intolerant host crops (Owen et al., 2019). Pratylenchusthornei followed by P. neglectus are the most important species of Pratylenchus found in the northern region (Thompson et al., 2008). Murray and Brennan (2009) estimated that P. thornei can causeAUD $104 million in potential losses annually to wheat in the sub-tropical grain region.Mung bean is a susceptible host to P. thornei and any increase in nematode populations can have detrimental effects on yields of subsequent intolerant crops.

Both Pratylenchus spp. and AMF occupy a similar ecological niche in the root cortex of the host plant. The coexistence of AMF and plant-parasitic nematodes in roots and soil has prompted a number of investigations into their interactive effects on plants. These investigations document the generally suppressive effect that AMF have on migratory nematodes (Yang et al., 2014), although some studies showed no effect or even an increase in nematode numbers after dual-inoculation with AMF (Pinochet et al., 1996; Hol & Cook, 2005). These conflicting results may be due to differences in environmental and nutritional factors, AMF species, nematode species and/or crop hosts (Gough et al., 2020).

Nematodes can also affect nodulation levels which may result in a decrease in functionality in chickpea (Castillo et al., 2008). Most research on the interaction between rhizobia, nematodes and AMF has been with root-knot nematodes Meloidogyne spp. and there is little information on how Pratylenchus spp. affect the levels or efficiency of nodulation. Hussey and Barker (1976) found Pratylenchus penetrans stimulated nodule formation on soybean but inhibited N fixing capacity. Synergism between AMF and rhizobia has been demonstrated in other leguminous crops such as chickpea, soybean and French bean as reviewed by Chalk et al., (2006).

The interaction between host, parasitic nematode, and beneficial symbionts is likely to be quite specific. So far, there has been no research into these interactions for mung bean in the vertosols of the northern grain region. 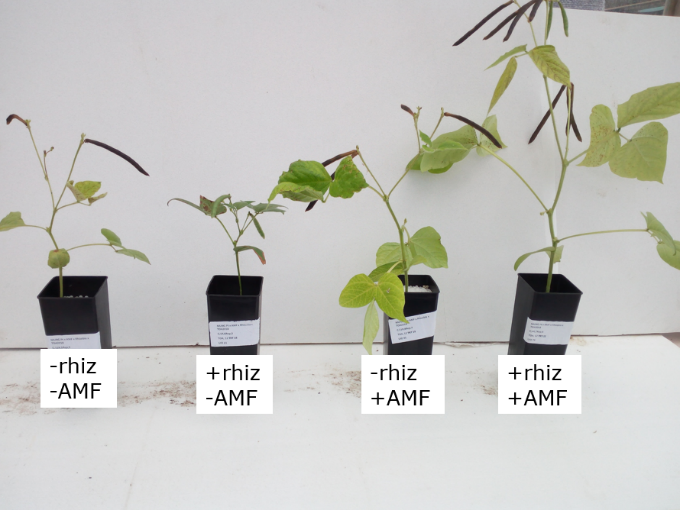 Figure 1. The addition of AMF and rhizobia to mung bean  increased plant biomass and seed yield four-fold at 12 weeks after inoculation in Experiment 1. 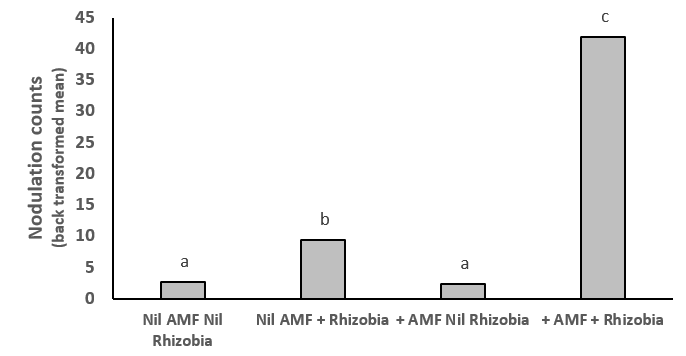 Figure 3. Synergistic effects of inoculation with both AMF and rhizobia at 12 weeks in Experiment 1 resulted in 4-fold increase in biomass (A-left) and seed weight (B-right) in mung bean. Different letters indicate significant differences at P=0.05 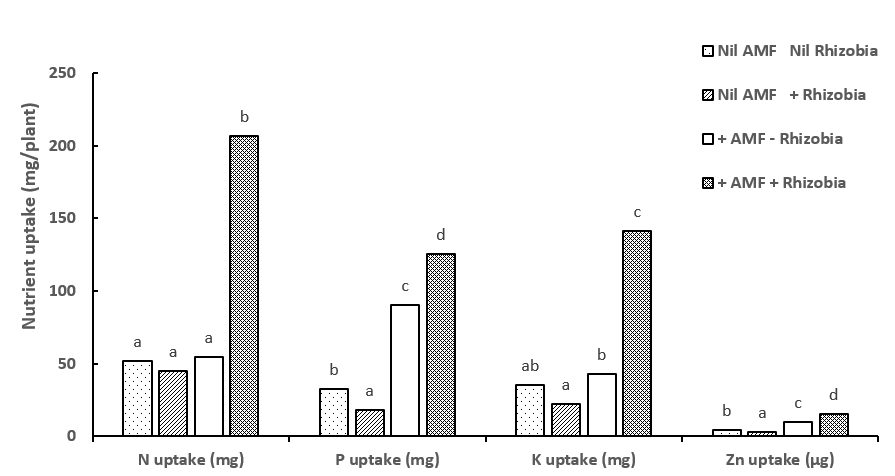 Inoculation with P. thornei did not affect nodulation rates of rhizobia, plant biomass or seed yield of mung bean. 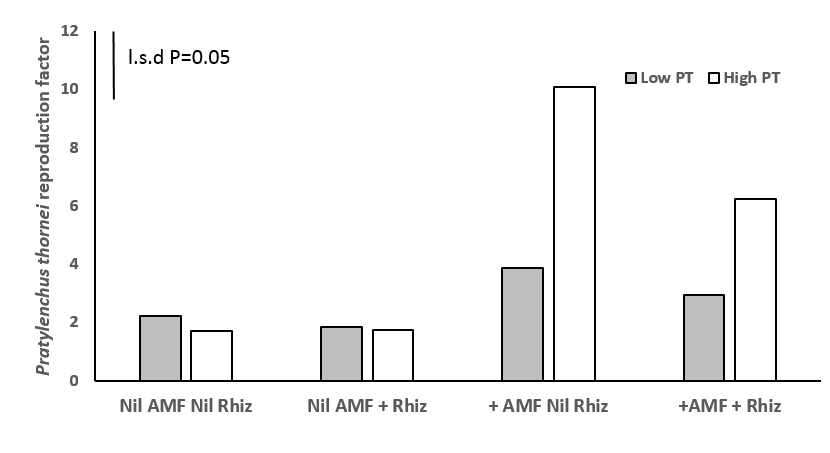 Figure 6. The higher reproduction factor (RF) of P. thornei was not caused by an increase in plant root biomass in mung bean at high initial rates of 10 P.thornei/g (Fig. 6 a), but was correlated at low rates of 1/g P. thornei (Fig 6 b).

Inoculating mung bean cv. Jade-AU with both AMF and rhizobia led to a large increase in the number of nodules, plant biomass and seed yield compared to rhizobia alone. This dual inoculation increased the uptake of nutrients N, P and K in the plant. It also increased the uptake of other nutrients essential to the metabolism of rhizobia and the establishment of an effective symbiosis such as Ca, Mg, Mn, Cu and B.

Establishing adequate levels of AMF in the soil, a soil analysis of AMF by PREDICTA®B prior to planting mung bean, and inoculation with the correct isolate of rhizobia, may lead to increased nodulation thereby increasing yield productivity of mung bean.

Management practices to establish adequate AMF levels can be achieved through rotations with crops that associate with mycorrhizae. As AMF require a living host to survive, soils after a long fallow or cultivation of a non-host crop such as canola, can reduce AMF propagules in the soil. Growing crops that have a lower mycorrhizal dependency such as wheat and oats, after a long fallow may increase the AMF propagules in the soil for a subsequent crop that has a higher mycorrhizal dependency (Thompson et al., 1997). Growing mung bean after mycorrhizal crops that are also poor hosts of P. thornei (Thompson 1994) would also be a good strategy.

However, variability in Pratylenchus population densities in the presence of AMF may be genotype dependent and may also be influenced by the species of AMF. AMF can increase the tolerance of plants to infestation by plant-parasitic nematodes (Schouteden et al, 2015). The increase in nutrient uptake from improved AMF colonisation, resulting in a more vigorous plant, may be a strategy to counteract the reduction in root quality and root efficiency conferring a compensatory effect against the damage done by the nematode. More research is needed on the interactions of AMF, rhizobia and Pratylenchus spp. in other mung bean genotypes and other host crops.

Schouteden, N, De Waele, D, Panis, B, and Vos, CM (2015) Arbuscular mycorrhizal fungi for the biocontrol of plant-parasitic nematodes: A review of the mechanisms involved. Frontiers in Microbiology, vol 6, pp 1280.

The PhD research is supported by a USQ research scholarship and a GRDC Research Scholarship to Elaine Gough. A special thanks to the Crop Nematology team at the Centre for Crop Health, USQ for support of this project and to QDAF for access to glasshouses at Leslie Research Facility.