Model analyses suggest a yield gap between water-limited potential yield and currently achieved production exists across northern Australian grain regions. This yield gap is a function of physical, chemical and biological factors in each soil, including capacity of soil to store and release water for efficient plant use. Many regions where yield is constrained contain dispersive soil within the surface 50cm and deeper. Sodicity (a high exchangeable sodium percentage) is a major cause of aggregate dispersion and may compromise soil structure. Dispersive behaviour decreases both soil water availability and nutrient acquisition, increases risk of runoff and erosion, and impairs biological (soil microbial and plant root) activity. Acidity, salinity (presence AND absence) and compaction further constrain yield potentials. However this project focuses on sodicity as the major constraint with often related constraints considered as compounding and/or interacting factors.

Amelioration of subsoil constraints is an expensive process. The engineering challenges and energy requirements are significant. It is important to acknowledge that production benefits from subsoil amendment are more likely to be observed in poorer seasons. In good seasons, root function and activity, and soil moisture, will be able to sustain yield from surface activity and extraction where soils are often less constrained. However in poorer seasons where subsoil moisture is required to finish a crop, subsoil amelioration will have a proportionately larger impact on yield. Hence, we expect that the return on investment in subsoil amelioration to be larger in poorer seasons, than in higher decile seasons with more growing season rainfall.

A series of linked investments is assessing the economics of ameliorating constrained surface and sub-surface soils in the northern region.  The program has four areas covering:

The research into soil amelioration and management has two components led by the University of Southern Queensland (USQ).  First is a set of six small-plot core experiments exploring detailed amelioration research. There are three sites in northern and central New South Wales (NSW) managed by the University of New England (UNE), and three sites in southern Qld managed by the Department of Agriculture and Fisheries (DAF).

This paper covers the challenges of core site implementation, describes the treatments being studied and the adaptations needed to deliver these treatments to depth in our constrained soils. It also extends to discussing the realities of attempting this process at a commercial scale. Finally it reports on the first season of field trial responses.

The USQ team undertook extensive surveying of 30 fields across central and northern NSW and southern Qld. The areas were clustered around 6 locations (Trundle, Armatree, Spring Ridge, Talwood, Millmerran and Meandarra), with 5 fields surveyed at each. Field surveying included capture of yield maps if available, satellite NDVI imagery, and soil mapping with EMI. Using a combination of yield, site elevation and EMI maps, bare soil colour imagery and grower experience, four survey points where selected for soil sample collection and analysis. After consolidating data ’core‘ experimental sites where selected in each of the six hub areas: three in NSW and three in Qld.

All sites were generally alkaline in the upper profile with an exchangeable sodium percentage (ESP) well over the 6% nominal threshold for healthy crop growth. Profile chloride (Cl) values were generally low, indicating that sodicity was likely to be the primary restriction.

Chemical characteristics of the six core experiments are below:

This research focussed on eliminating sodium as a constraint for the upper 50 cm of a soil profile. It was ‘proof-of-concept’ research, intended to explore effects on soil water storage and grain yields under gypsum application rates to remediate the ESP to ≤ 3% in either or both of the top 20 cm of soil and half of the soil volume in bands from 20 cm down to 50 cm depth.  Organic matter (OM) also acts to limit aggregate dispersion (as well as providing nutrients at depth) and, whilst not reducing ESP, may act to improve water holding capacity and pore stability. Gypsum rates (often ≥ 15 t/ha) were compared against a high rate subsoil (≈ 20 cm deep) compost (Qld)/lucerne pellet (NSW) application (≈ 10 t/ha), and the application of elemental sulfur to dissolve calcium carbonate to produce gypsum in-situ and lower alkalinity.

The rates chosen are considerably higher than the likely economically viable rates and were deliberately chosen to determine if subsoil remediation to remove dispersive constraints would result in improved production outcomes beyond the first year. With that in mind, it is worth considering that the cost in diesel of ripping to depth without adding the necessary amendment is unlikely to be recovered.  Repeated, smaller gypsum/OM applications coupled with deep ripping to place them is cost prohibitive. Hence, single, large, additions may ultimately be best practice.

Similar treatment structures are used in both NSW and Qld, with both physical and chemical ameliorants, a range of options exploring impacts and/or interactions between tillage (shallow and deep), deep placement of nutrients (as inorganic or organic forms), surface and subsurface applications of gypsum to reduce ESP to < 3%, incorporating organic amendments (lucerne pellets in NSW and composted feedlot manure in Qld), and applying elemental sulfur (ES) to decrease soil pH and generate gypsum in situ (Table 1).

Surface gypsum treatments were spread onto the soil, and then incorporated by ripping to 20 cm. Actual application rates for gypsum varied with each site based on calculations that capture the required Ca to lower the ESP to <3%, but the overall structure of the experiment stayed the same.

The applied gypsum rate for subsurface placement was banded with 50% of the total needed for the whole 20 to 50 cm layer of soil. For example, if a total of 20 t/ha of gypsum was theoretically needed to remediate the entire 20 to 50 cm layer, in this application 10 t/ha was applied to ensure the right amount of gypsum within each band (assuming the band covers 50% if this zone).  In NSW, it was assumed that the band only treated 25% of the profile, so only 25% of the total gypsum needed was applied – 5 t/ha in the example. Further details on how it was applied are outlined later in this paper.

Application rates for all ameliorants are substantial, with rates often greater than 6-10 t/ha being applied. With such large amounts of product required, logistically it is challenging to source, transport and apply the treatments at each site, especially with deep (~20 cm) applications.

Applicators are not going to be universally capable machines for putting ameliorant at depth – it is very challenging to engineer something to measure and distribute all manner of materials.  The deep placement machine used in Qld required amendments with the physical characteristics of being relatively fine and easily flowable in order to be metered and delivered to depth. This was achieved by using 6 mm screened feedlot compost, and air drying natural mined gypsum to reduce moisture content. All materials were screened at the top of the applicator bin through a 12mm screen to further exclude lumps. In NSW, flow problems were resolved by using pellets and prills – a more expensive solution.

Metering of products was achieved through fluted rollers (Figure 1). Further changes were undertaken adapting it for use in the soil amendment experiments.  Modifications included 75 mm chutes for amendment delivery down the back of the applicator tine and inclusion of a crumble roller for smoothing the surface slightly. 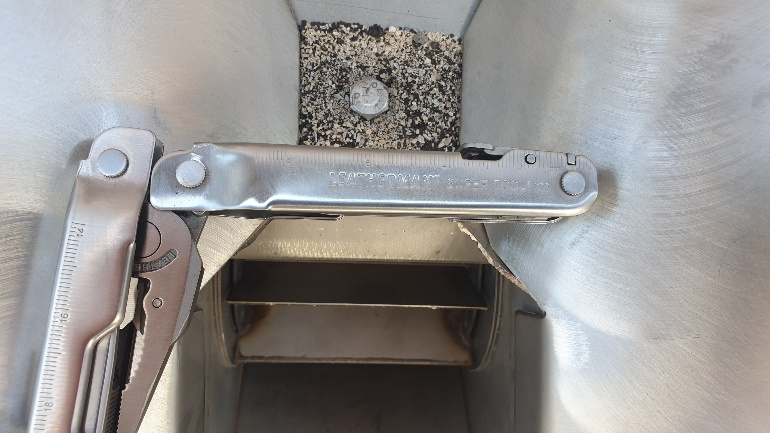 Figure 1. Metering unit for amendment application on the Qld research machine, with ruler for scale.

Given the ‘proof-of-concept’ intent of much of the research, interpretation of individual specific effects is challenging.  What the research outcomes do confirm is there exists a significant upside in yield achievable with combinations of physical and chemical inputs.

Millmerran was planted to sorghum for 2019-20, while Dulacca, Armatree, Forbes and Spring Ridge all had winter crops in 2020. While experiments are similar across the Qld and NSW components, the results for the different states are reported separately.

In Qld, yield increases have been recorded at both the harvested sites.  At Millmerran (Table 2), grain yields increased up to ≈25% or 750 kg/ha.  In general, treatments with combinations of surface gypsum and subsurface NPK (i.e. trt 4, 7, 8 and 13) had the largest yield gains.

At Drillham (Table 3), grain yields increased up to ≈60% or 1,250 kg/ha. Three treatments in particular provided the largest increases, treatments 10, 12 and 13.  Commonality of these treatments is all have tillage to 30 cm, and either have high nutrient supplies from the high NP rates (treatment 10), or the composted feedlot manure (12 and 13).  Deeper ripping (to 30cm) and lower nutrient inputs (50N,30P) increased yields by 800 kg/ha (40%), but it appears the higher nutrient supply plots allowed greater yields to be recorded.

The Armatree site produced a 4.5t/ha crop at around 15% protein and had significant differences between treatments in both grain yield, and biomass at flowering (Table 4). In general, deep ripping and the addition of nutrients, as banded fertiliser or contained in the organic amendment, increased growth and yields by approximately 20%. However, the organic matter treatments (11-13) ran out of water during grain fill due to the very large biomass produced, resulting in similar yields to the controls, with higher protein and screenings levels.

Forbes had no significant differences in canola grain yield, but the organic treatments did increase protein and reduce oil content (Table 5). The site was waterlogged for most of winter, and still had moisture in the profile at harvest, so any differences in plant available water capacity, or root penetration to depth, were unlikely to have shown up in this season. The plant population was also extremely variable due to the surface roughness from the ripping and waterlogging from 70mm of rain immediately after sowing. This variation has been included in the statistical analysis, but also suggests that small-seeded canola may not be the best crop for growing immediately after a ripping program.

Spring Ridge also had no significant differences in biomass at flowering, or barley grain yield (Table 6). The high yield reflects the good season in 2020 and suggests that the site may not be as constrained as originally thought. We are uncertain if this lack of observed yield constraint is long term, or due to the above average rainfall in early 2020 which may have resulted in short term leaching of the salinity found in the initial sampling.

* Treatments with the same letter do not significantly differ (P<0.05) ns = no significant difference.

We present one year of results, after a very wet summer/autumn which allowed all plots to refill after treatment application except for the Talwood site which has been planted in mid-January 2021. The 2021 crop will give a better indication of long term effects of treatments, and (possibly) under more typical conditions. Increases in yield as a result of the ripping may also require extra nutrients to achieve the increased yield potential.