The ‘Optimising yield potential of winter cereals in the Northern Grains Region’ project has been a co-investment by GRDC and NSW DPI under the Grains Agronomy and Pathology Partnership (GAPP) in collaboration with QDAF. From 2017-2020, field experiments were sown across ten locations in New South Wales and Queensland where annual rainfall ranged from 184 to 853 mm and grain yields ranged from 0.2-10 t/ha. The project aimed to provide a better understanding of wheat phenology and yield responses across different environments to refine sowing recommendations and improve yield stability and profitability of growers in the northern grains region (NGR).

The consistent messages presented from the project to date have centered around synchronising crop development (phenology) with seasonal conditions to ensure that the optimal flowering period (OFP) is matched to the growing environment. In previous GRDC Update papers, we combined model simulation and field validation to determine OFPs across locations in the NGR, whereby the OFP varied in timing and duration, as well as for different yield levels (Harris et al. 2019, 2020). As flowering time is a function of the interaction between variety, management and environment, the two primary management levers growers can pull to ensure flowering occurs at the optimal time and yield is maximised are time of sowing and variety selection.

In wheat, flowering is generally accelerated under long-day photoperiods and varieties can be broadly classified into two main types: winter or spring, distinguished by their response to vernalisation and their adaptation to different sowing dates. Winter types can be sown early and will remain vegetative for an extended period (e.g. DS Bennett, LRPB Kittyhawk). This extended vegetative period arises from a genetic requirement of the plant to experience prolonged cold temperatures to trigger flowering (vernalisation). This delays cold-sensitive reproductive stages to ensure flowering coincides with optimal seasonal conditions in spring.

In contrast, spring types generally do not require a period of cold temperature to initiate flowering. However, they can vary in their responses whereby exposure to cold temperatures can hasten their development (e.g. LRPB Nighthawk) or have no effect on development (e.g. Dart, Sunprime). There are multiple combinations of vernalisation and photoperiod genes which influence phenology responses, as such we have observed significant variation in flowering response among both winter and spring types across environments and in response to sowing time. The figures below present the range in flowering date responses across years and sowing dates for two sites and highlights the risk of precocious flowering in quicker spring types. 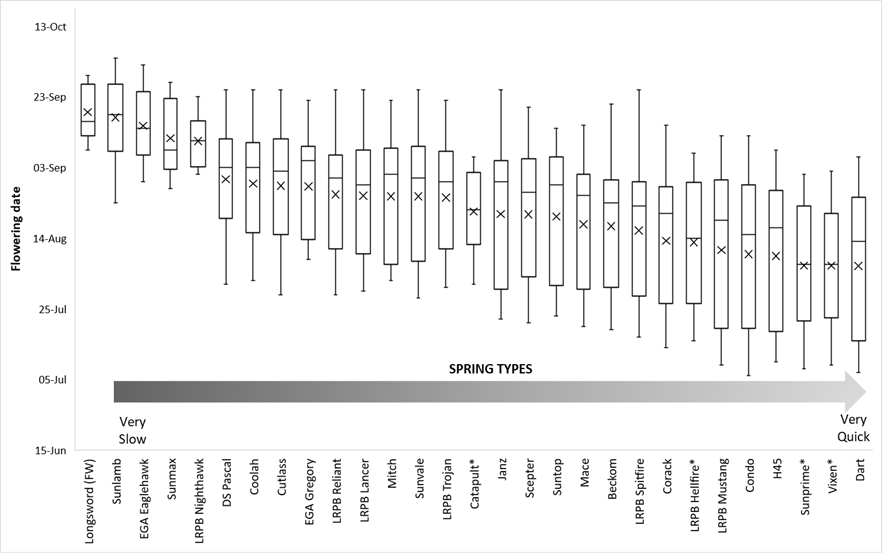 Need to match varietal phenology and sowing time with environment

Generally, slower developing winter types are more suited to cooler, medium-high rainfall environments in southern NSW which have a longer growing season and increased risk of frost. Winter types when sown early are capable of high water-limited yields, can spread sowing risk and also be a useful frost mitigation tool. However, the vernalisation requirement of these winter types makes them less suited to warmer environments of northern NSW and QLD, where we observed flowering dates later than the OFP and often significant yield penalties in comparison to more adapted mid-quick spring types sown within their recommended window.

In contrast, quicker developing spring types are better adapted to regions with shorter growing seasons, and in environments or later sowing scenarios where frost and heat stress occur in close proximity to each other. Despite the variability across environments and seasons, we were able to identify varieties which were able to maintain relatively stable grain yields across many sowing dates at some sites and which may offer more flexibility to growers. 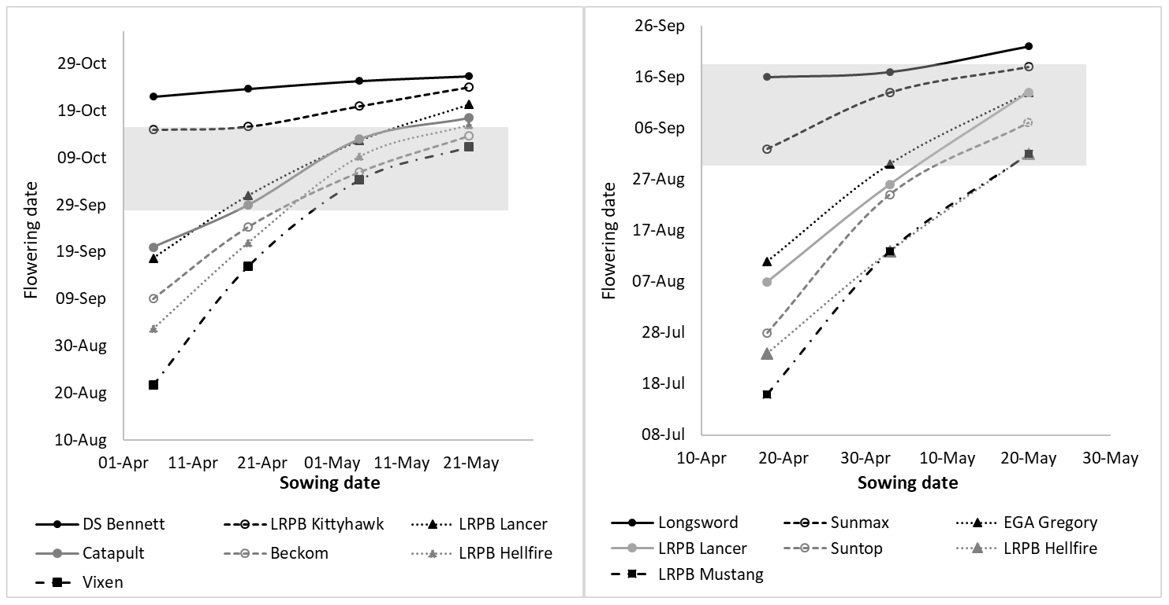 Figure 3. Mean flowering date responses of selected genotypes at a) Wagga Wagga (2018), Marrar (2019) and Harefield (2020) and b) Edgeroi (2017) and Narrabri (2019, 2020) across sowing dates. Shaded box indicates optimal flowering period for each location.
(All the varieties mentioned in the figure above are varieties protected under the Plant Breeders Rights Act 1994.)

Know the risk of getting it wrong - #SowSlowEarly

Winter types – we have observed a yield penalty in many mid-fast winter types when sown prior to early April.  This is often due to difficulties establishing crops when soil temperatures are high and there is rapid drying of the seed bed following a rain event. The vernalisation response of some winter varieties has also been observed to be less stable when sown very early, which can result in stem elongation occurring earlier and an increased risk of frost damage.  Unless grazing is the primary purpose, sowing prior to early April can increase crop water use under warm temperatures. This can lead to increased likelihood of excessive vegetative growth, taller crop heights and lodging, as well as increased disease pressure.

Spring types – although we have observed significant variation in phenology responses to sowing date amongst spring types, when sown early (when temperatures are warmer and days longer) flowering behaviour is unpredictable and varies substantially across seasons (Figure 1, Figure 2). As such there is increased risk of spring types flowering earlier than the OFP and grain yield penalties due to frost damage or insufficient accumulation of biomass when sown earlier than their recommended windows.

Key recommendation is to remain disciplined with sowing dates – don’t sow too early! 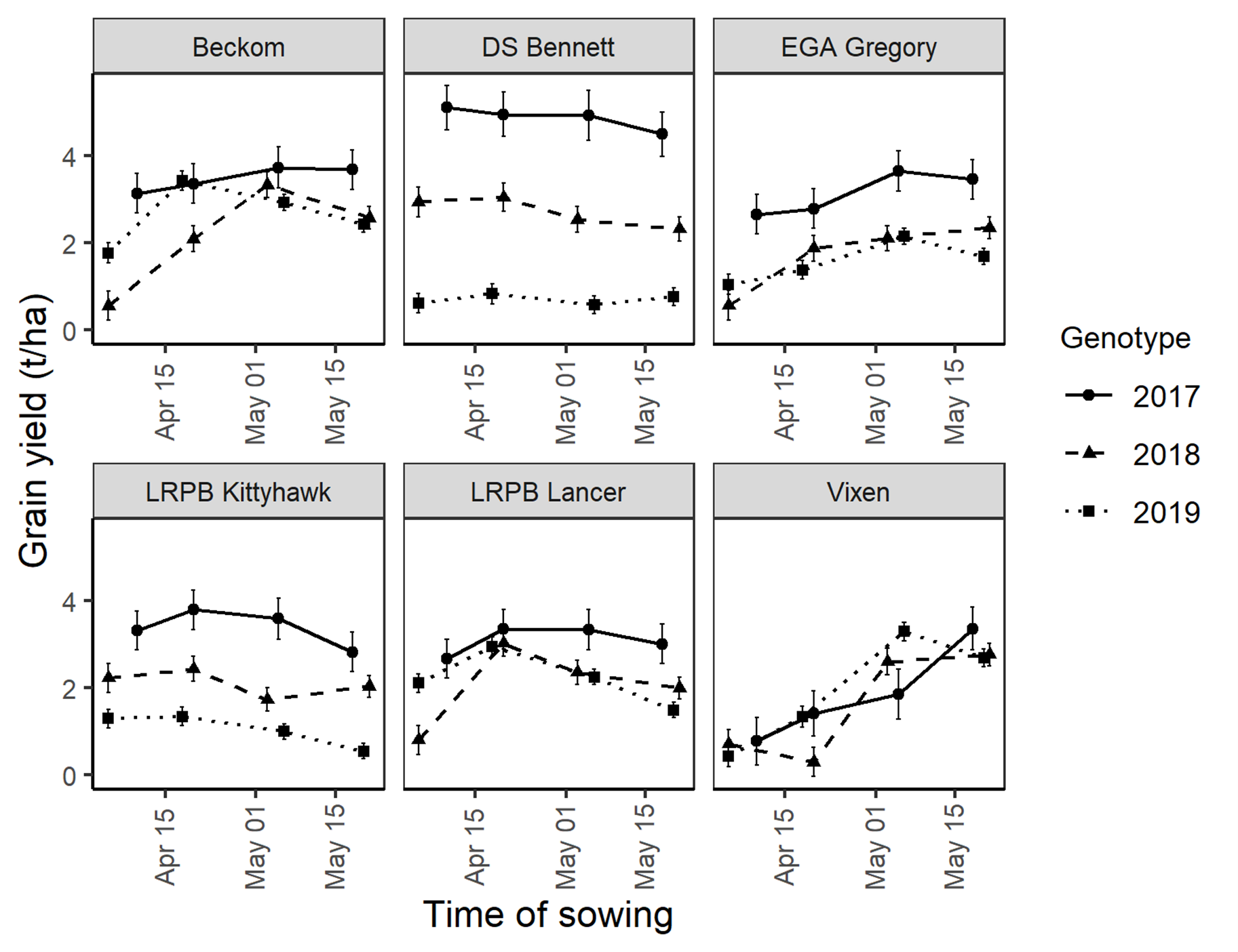 Figure 4. Yield response to sowing time predictions (BLUPs) for a subset of six genotypes for Wagga Wagga in 2017 and 2018 and Marrar in 2019. Vertical error bars denote the 95% confidence interval.
(All the varieties mentioned in the figure above are varieties protected under the Plant Breeders Rights Act 1994.)

Compared to wheat, barley is considered to be more widely adapted, have superior frost tolerance and offer higher yield potential across environments in southern Australia. A comparative analysis of the best performing barley and wheat genotypes (defined as the highest yielding treatment) where experiments were co-located across production environments at eight sites in NSW from 2015-2020 is presented in Figure 5. The OFP where yield was maximised for barley was found to be 10-14 days earlier than for wheat, and barley maintained a yield advantage over wheat at yield levels ranging from 1.5-9.6 t/ha. Our understanding of the specific interactions between phenology and environment in barley and the differences in yield physiology between the cereals species is limited. In 2020, a new project was initiated to quantify the flowering time, yield and quality responses of barley, relative to wheat across a range of sowing times. Preliminary data from 2020 will be presented at the updates. 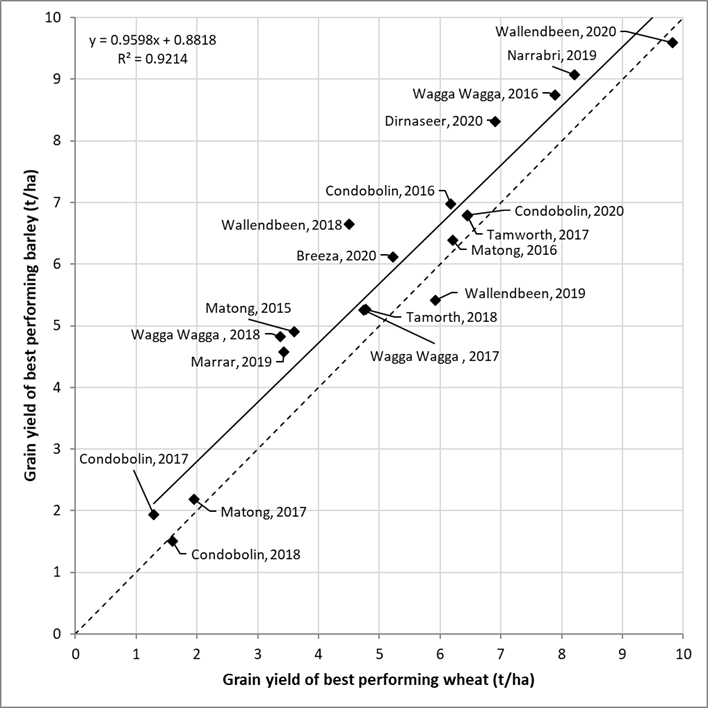 Figure 5. The relationship between the best performing wheat and barley genotypes (sown at optimal time for each environment from mid-April to late-May) at nine sites in NSW from 2015-20. Dotted line indicates 1:1 relationship.

Sincere thank you for the technical assistance of Mary Matthews, Jessica Simpson, Ian Menz, Jordan Bathgate and Dean Turner at the Harefield, Dirnaseer and Wallendbeen sites; Braden Donnelly and Daryl Reardon at the Condobolin site and Michael Dal Santo, Jim Perfrement, Jan Hosking and Bruce Haig at the and Narrabri sites in 2020. Thank you also to the Moloney, Hazlett and Ingold families for their support and co-operation in hosting field experiments in 2020.

We also acknowledge the input and contribution of James Hunt (La Trobe University) and Kenton Porker (SARDI) throughout the ‘Optimising grain yield potential of winter cereals in the Northern Grains Region’ project and research collaboration in the GRDC project ULA9175069 ‘Development of Crop Management Packages for Early Sown, Slow Developing Wheats in the Southern Region.