Alternate second knock herbicides for broadleaf weeds in fallow – are there other options?

The sequential application of two separate herbicide treatments has become the most common ‘double knock’ approach used in weed management. Unfortunately these approaches have added cost, complexity and scheduling issues to weed management programs but have been required for two main reasons:

Paraquat has been the key active ingredient used in the second knock situation and can provide effective management of a wide range of grass and broadleaf weeds. However, it is clear we require other options to use in this management window to:

Since winter 2016, NGA have been screening a range of herbicides, to identify options that have potential for this use pattern. The two key broadleaf weeds being targeted are common sowthistle (Sonchus oleraceus) and flaxleaf fleabane (Conyza bonariensis).

Table 1 shows the key details of trials conducted during the last 12-15 months.

1st knock treatments were applied uniformly across the entire trial area. The most common treatment was a mixture of glyphosate and 2,4D amine, with the rates varying with the weed stage, environmental conditions and the grower/adviser recommendations.

2nd knock applications were applied between 7 and 19 days after the 1st knock treatments.

Figures 1 and 2 show results from two of the trials evaluating double knock control of common sowthistle conducted in 2017. 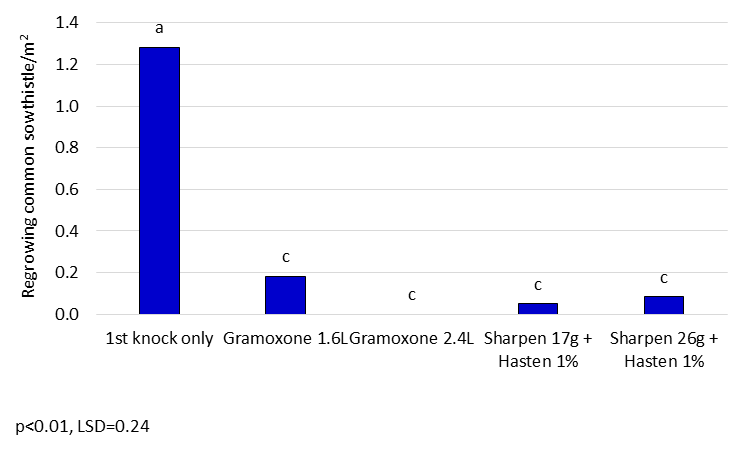 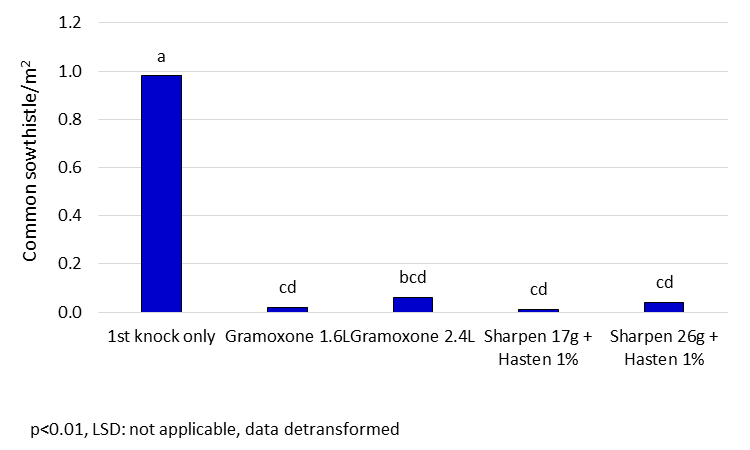 Figures 3 and 4 show results from the two sites in 2016 evaluating double knock control of flaxleaf fleabane. NB Figure 4 shows the result from a site where the commercial application of a 1st knock was glyphosate alone. Previous activity has shown that the addition of 2,4D to the first spray is generally critical to achieve effective control of flaxleaf fleabane, even when double knocked with paraquat. 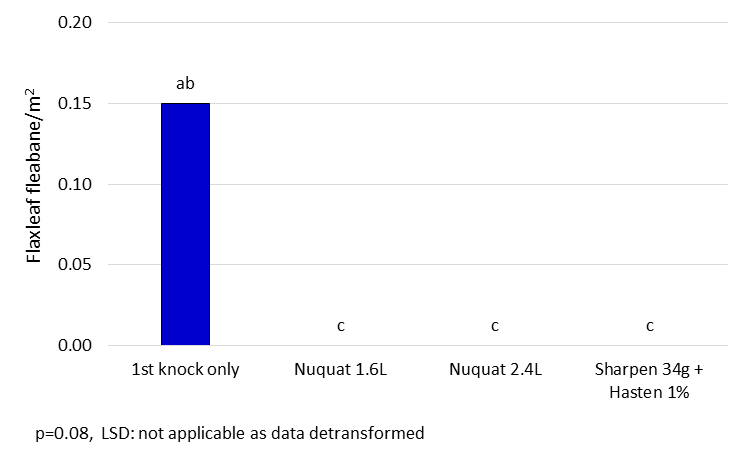 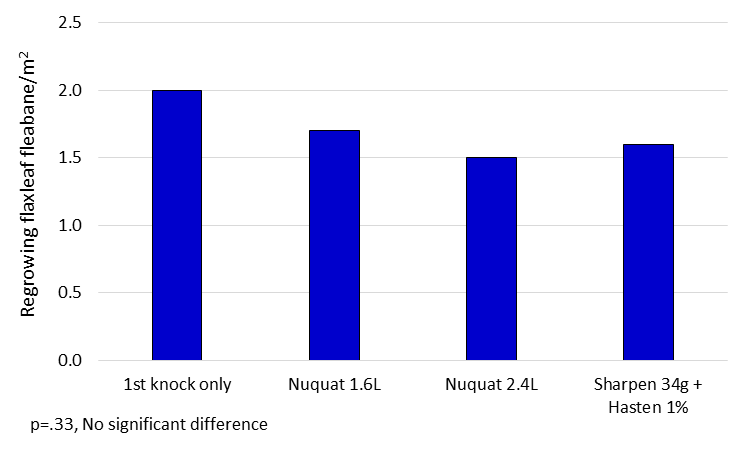 The results to date indicate that the group G active ingredient saflufenacil warrants further investigation as a potential 2nd knock option for the control of a number of key broadleaf weed species. Across this series of trials, the level of control was similar to that provided by rates of paraquat of 1.6-2.4L/ha. However in situations where paraquat failed to provide useful efficacy on flaxleaf fleabane following an application of glyphosate only, there was no indication of improved benefit from saflufenacil.

Saflufenacil clearly may have a useful fit as a 2nd knock alternative on broadleaf weeds such as common sowthistle or flaxleaf fleabane. However the majority of fallow applications have a need for both broadleaf and grass control. Consequently part of the project activity in 2017 was to commence an evaluation of the fit of saflufenacil/paraquat mixtures to identify cost effective but more robust options for use as 2nd knocks.

NGA would particularly like to acknowledge the assistance from our trial co-operators during this series of trials: Terry Leerentveld, Justin Commens, Warren Myring, Ben McIntyre, Aaron Goddard, Gavin Maguire, Graeme Gall and the Strang Family.