In Australia’s northern grains region, climate variability presents growers with challenges, but also the opportunity to match hybrids and agronomy to match site, as well as prevailing and expected seasonal conditions. Water and nitrogen availability at planting together with expected in crop rainfall, all contribute to the final yield result. Some of these variables are known or could be known if measured before planting, others, e.g. seasonal climate forecasting, require specialised training packages for growers and advisers. Here we discuss growers’ opportunities to inform how to match hybrid and agronomy to site and seasonal conditions at the time of sowing.

Over the last three years results from UQ00074 and UQ00075 demonstrated that the largest opportunity to manage stresses, increase profits and reduce risks in rainfed cropping, is to inform optimum combinations of hybrids and management options for specific sites and expected seasonal conditions. This is shown in Figure 1, which summarises results from on farm and on research station trials (n=15) run between 2014 and 2017 from the Liverpool Plains to Central Queensland. Trials consisted of combinations of hybrid i.e. most commercial hybrids, plant density, and row configuration. The combined dataset from NSW and Qld included results from more than 1960 individual plots. 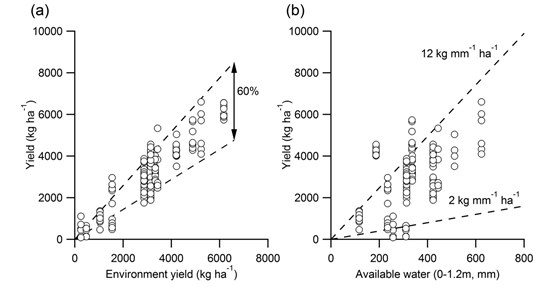 Figure 1. Treatment mean yield (y axis) versus environment yield (x axis) i.e. mean of site yield from all the treatments (a), and (b) relationship between treatment means and available water estimated as soil moisture at sowing (0-1.2m) plus in crop rainfall and added irrigation (if any).

The data in Figure 1 was further analysed to derive simple rules of thumb to help match hybrids and agronomy to expected yield environments. For the analysis, we only used data from sites that showed average yields larger than 2.5t ha-1. The combined data set then was reduced to 488 treatment means i.e. combinations of hybrids, row configurations, densities, sites and seasons. The median yield for the data set was 5.3 t ha-1 with minimum and maximum treatment yields of 1.7 (rainfed) and 7 t ha-1, respectively. Note that fully irrigated crops grown on research station trials at Gatton yielded over 12 t ha-1. 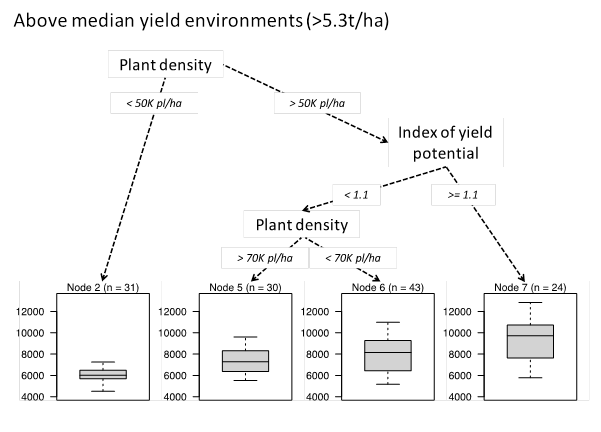 Figure 2. Simple rules of thumb from on-farm trials for below (top graph) and above (lower graph) median (5.3t/ha) yielding environments. The right-hand side of each graph shows the highest yielding hybrid and management combinations. While, the left-hand side of the graphs shows the lowest yielding combinations of hybrid and management for each environment. The dashed red line indicates a yield of 2.5t/ha. ISW = initial starting water (at sowing) as a % of PAWC; n = is the number of treatments included in each graph.

Figure 2 shows the higher yielding combinations of hybrid and management to the right, and the lower yielding to the left. For example, for the lower yielding environments (i.e. below 5.3t ha-1, top graph in Fig 2) the main variables separating low from high yielding treatments were row configuration, soil water at planting, plant density and hybrid tiller propensity. In these environments, the highest treatment yields were observed in solid configurations, and plant populations between 50 and 60k pl ha-1. Even though the small variability in tillering among the tested hybrids, the difference between higher and lower tillering hybrids was about 1t ha-1. This represented a yield increase from 3.5 using higher tillering to 4.5t ha-1 using lower tillering hybrids in dryer environments; and calls for low tillering or uniculm hybrids in dryer environments. The lowest yields were obtained with skip, double skip or super wide configurations and with less than 215mm of soil water at planting.

In the higher yielding environments (bottom graph in Fig 2) plant density and the yield potential of the hybrid were the most important variables discriminating between low and high yields. In these environments, the highest yields were observed with populations of more than 50k pl ha-1, on hybrids showing high values for an index of yield potential. No lodging was observed in any of our trials, although lodging has been reported for high yielding hybrids and plots. Causes of lodging in sorghum are not clear, though have been associated to terminal stresses, weak/thin stems, and high yield potential crops (large panicles). The lowest yields in high yielding environments were observed with plant populations below 50k pl ha-1.

Clearly our understanding of crop stress physiology indicates that in hindsight, optimum combinations of hybrid and management (for the past season) could be known. Obviously, our main problem is to predict relevant attributes of the season at the time of sowing, so that optimum GxM combinations could be informed. Even though contestable, outputs from seasonal climate forecasts and crop models could be used to inform optimum combinations of hybrids and management. I say contestable, because given the chaotic nature of the atmosphere, it is impossible to know exactly how it will evolve beyond a few days. Our only option is then to use probabilistic forecasts that give changes in the likelihood of the coming season to fall within a particular range of the historical climate records. A concept sometimes difficult to understand by those needing to inform “yes” or “no” type decisions, e.g. to plant or not to plant.

In our recent work we used seasonal climate forecast and crop models to test our capacity to answer Can we inform optimum GxM combinations in sorghum? Results showed that BOM’s POAMA-2 forecasts showed higher skill than the SOI phase system. Actually, the SOI phase system appears to have significantly degraded and shouldn’t be used anymore. We also found that the level of value in the skill of POAMA-2 depended on the baseline for the comparison: When current growers’ practice was used as the baseline, linking APSIM sorghum and POAMA-2 increased average profits by 143 AU$ ha-1 and reduced or even eliminated down side risk. When the baseline for the comparison was a higher investment strategy, the actual value of the additional climate information was on average 17 AU$ ha-1, which compares to the benefits derived from Australia’s sorghum breeding over the last thirty years i.e. 2.1% per year, or 44 kg ha-1 year-1.

These results indicate that even though the value of the additional climate information might seem small (ValueoptSCF, in Table 1), its magnitude compares well with that derived from much larger and better funded breeding programs e.g. sorghum. This also shows that much larger benefits (ValueoptS) could be realised when using this information in discussions with growers and advisers on benefits and risk from increasing investments in dryland cropping. Table 1 also answers the question ‘What would be the value of having a hypotetical perfect seasonal climate forecast?’ (ValuePK in Table 2). In Table 1, comparing Valueopts i.e. reflecting the value of present skill in forecasting, and ValuePK i.e. reflecting the value of a perfect forecast, shows that our present predictive capacity is about mid-way from what it could be if a perfect forecast would be available.

ValueoptSCF = difference in profit ($ ha-1), between ValueoptS and the dynamically (every year different) optimized hybrid by management combination informed by the POAMA-2 seasonal climate forecasts.

APSIM simulations for the Liverpool plains

Given the large number of possible combinations of hybrid and management available to growers, together with the large diversity in sites and seasonal conditions, it would be impossible and too costly, for any experimental program, to comprehensively run trials to cover all possible combinations. This is where well tested crop simulation models like APSIM are most useful. The Agricultural Production Systems sIMulator (APSIM) was developed in Australia, and is an internationally recognised as a highly advanced simulator of agricultural systems. APSIM contains a suite of modules which enable the simulation of systems that cover a range of plant, animal, soil, climate and management interactions. APSIM is undergoing continual development, with new capability added to regular releases of official versions. Its development and maintenance is underpinned by rigorous science and software engineering standards. A detailed description of APSIM sorghum is available from:

While results from model validation for a range of output variables e.g. biomass at flowering and maturity, leaf area at flowering, grain size, grain number and final yield are available from:

Here we used APSIM to answer the following questions:

To answer these questions, we ran APSIM-sorghum, for climate and soils of Quirindi, Mullaley, Spring Ridge and Caroona in New South Wales (only Quirindi is shown here). Soil characteristics are described in Table 2. The model was run for fortnightly sowings from the 15th of September to the 15th of December; parameterised for MR-Buster, MR-Scorpio, MR-Taurus, MR-Apollo and G33; with three different levels of N fertilisation 50, 100, 200 kg ha-1; four plant densities 3, 5, 7, and 9 pl m-2; and assuming four soil moisture conditions at the time of sowing, 30, 50, 70 and 100% full.

Figure 3 shows the likelihood of failed crops when sown fortnightly from 15 Sept to 15 Dec, on 30, 50, 70 and 100% of PAWC at sowing. Simulations are for the long-term climatology (blue), and assuming the case of no follow up rain for 30 and 60 days after sowing (red and green, respectively).