Grain growers can learn from other industries about risk and business management. However, when reading general articles on business planning and monitoring, it is worth noting that agriculture is the most volatile industry sector in the Australian economy. Agriculture is more than 2.5 times more volatile than the average of all industries and significantly more volatile than the next ranking industries of insurance and construction, which were 1.5 times the average of all industries (Keogh et al. 2011).

Australian farmers face a higher degree of production volatility than farmers in any other Organisation for Economic Co-operation and Development (OECD) country. At the same time there is little buffering by price support or government assistance. Compared to other OECD countries they have equal highest price volatility and relatively low levels of direct and indirect income support from government (Kimura and Anton 2011).

As grain growers have improved agronomy and access to better varieties, climate remains as a major risk. As an older farmer in the Mallee said ‘We have beaten eel worm (cereal cyst nematode (CCN)), we are on top of weeds and nutrition, we have better varieties but we are still affected by frost and drought… what are you guys doing about it?’.

The draft GRDC 2018–23 RD&E plan was widely circulated for input and discussion. This document placed significant emphasis on risk: ‘Risk is an important part of the profit equation. Risk management that is too conservative can limit profit in above average production years while approaches that are too aggressive can expose the grower to equity issues that adversely impact profit and future operations.’

Using seasonal forecast information and tools to manage risk and increase profitability in the Southern Region is a 21-month project (April 2018 to December 2019) with three main components:

The project will be led by Graeme Anderson and Dale Grey from Agriculture Victoria. In addition to overall project management they will lead the extension of the successful ‘The Break’ suite of communication products across the Southern region. The development and running of the workshops with 20 advisers will be led by SARDI (Peter Hayman) working with Barry Mudge (low rainfall farmer from SA & Mudge Consulting) and Mark Stanley (Regional Connections).

GRDC is also a partner in the project funded by the Australian Government Department of Agriculture and Water Resources through the Rural R&D for Profit program Forewarned is forearmed (FWFA): equipping farmers and agricultural value chains to proactively manage the impacts of extreme climate events. This project is funding the Bureau of Meteorology to forecast extreme climate and weather events for a range of key rural industries including the grains industry.

What is the essence of the problem caused by climate variability?

Climate variability reduces farm profit directly through difficult seasons and indirectly by creating risky decisions. Drought, late starts, frost and heat have obvious direct impacts on farm profitability. The fortunes of grain farms and the communities that they are part of rise and fall with the seasons. A good season like 2016 in the SA grains belt allowed many people to pay down debts, invest in equipment and human capital whereas a difficult season like 2017 obviously leads to reduced profits and less investments.

In addition to the direct losses, climate variability imposes a subtler impact on farm profitability. Because the coming season is uncertain, many growers will make the reasonable decision to apply lower rates of fertiliser, perhaps sow later in frost prone regions and grow less pulses and canola than is optimal for long-term productivity. These decisions are rational, but they do create a drag on long term farm profit. Even risk neutral decision makers are faced with a ‘moving target effect’ whereby it is hard to make the optimal decision for the coming season on crop area, crop type, variety, sowing time and input level when there is uncertainty about the coming climate. The uncertainty makes giving advice and following decisions challenging and, for many people, stressful.

Decision making with climate uncertainty – more like poker or chess?

Dr Annie Duke was unwell just prior to completing her doctorate in cognitive psychology at a high ranking US university. To cover her costs she decided to try professional poker. Twenty years and $6.4 million later, she combined her academic training and poker experience to write a book ‘Thinking in bets, making smarter decisions when you don’t have all the facts’. She argues that it is important to decide whether the problem you are dealing with is more like chess or poker?

Chess contains no hidden information and very little luck. The pieces and positions are there for both players to see, there is no roll of the dice that can make a bishop disappear. If you lose at chess, it is because there were better moves that you didn’t make. Poker is a game of incomplete information, of decision making under uncertainty. If you lose chess, I can assume the other player is better than you, but if you lose a hand of poker you may or may not be more skilful than your opponent. Both chess and poker have their attractions.

Poker players will point to luck and uncertainty adding excitement, it also means that losing poker is easier on the ego than being beaten in chess. According to some recent research 'Hard evidence: is poker a game of chance or skill?' you need about 1500 hands to be confident that one player is more skillful than another. Most on-line poker players play about a hand a minute, so it takes more than 24 hours to be sure that you have more skill than luck.

Annie Duke works with companies to make the point that good decisions will not always have a great outcome. A great decision is the result of a good process, and that process must include an attempt to accurately represent our own state of knowledge. That state of knowledge, in turn, is some variation of ‘I’m not sure’. She argues that the choice between two options is rarely a case of 50:50 or 100% sure. She laments the current media environment where politicians, pundits and experts seem to have no self-doubt and if anyone does express some doubt they are assumed to know nothing.

Managing the direct and indirect impacts of climate

There are a range of options that successful grain farm businesses use to minimise the impact of adverse seasons. These include accepting that tough seasons will occur and undertaking sound business management using income smoothing tools such as Farm Management Deposits (FMDs) and in some cases, insurance. A long term strategy to deal with difficult seasons is diversification both on farm (crop and livestock) and off farm. Improved varieties and agronomy have enabled growers to make the most of difficult seasons.

Zero tillage, especially on lighter soils has led to some remarkably good crops in tough seasons. In addition, there is the ability to recover when a season turns bad by considering ‘safe fail’ rather than fail safe systems, for example grazing or baling a failed crop. Much was learned by growers, advisers and researchers during the millennium drought 2002 -2009. A good summary is provided by the GRDC 2008 Planning Guide for Low-Risk Farming.

A careful reading of this guide shows that most of the recommendations are farm business and agronomy practices that are good to follow whatever the coming season. Recommended actions include developing an annual business plan, identifying the better and poorer paddocks, conducting a feed budget for livestock, controlling summer weeds, controlling fertiliser costs, carefully monitoring crops and pastures and planning marketing strategies. These all make up a useful checklist for people under the stress of a run of bad seasons but they apply to all farmers. These are more like chess strategies where it is easy to identify what is a good decision or best practice. That is not to say the outcome or benefit of following this advice is not affected by climate.

The benefit of no till and controlling summer weeds will be more apparent in poor seasons (as 2008 turned out to be for some). Although the outcome is sensitive to climate, uncertainty about the coming climate doesn’t change the advice or decision. These are not climate sensitive decisions in the way that the appropriate rate of N topdressing is a climate sensitive decision. Table 1 compares farm management practices that deal with climate variability, the first column is more like advising a chess player, the second column more like poker. The farming game involves a bit of chess and a bit of poker. Information from climate science has more to offer decisions under uncertainty which are more like poker.

There is a vast amount of advice and take-home messages written by researchers and advisers for grain growers and most of this is like chess moves. The best examples break a complicated problem down to a series of steps where the outcome is more or less guaranteed. This practical step by step approach has made an enormous contribution to sound agronomy. What is interesting is that even a problem like the appropriate N fertiliser rate in dryland farming tends to be written about as a chess move. Most of the discussion on N budgeting emphasises calculating the supply of N by soil testing and estimating mineralisation and then determining the crop demand by picking a single decile or target yield.

There is often an acknowledgement that information on the coming season is unknown. However, in most of the vast amount of material on N budgeting, there is little formal, practical, step by step ways to consider this uncertainty. Much of the key material on N budgeting could be applied to an irrigated grain crop in the same way as a dryland crop.

Table 1. Comparison of farm management practices – is it chess or poker.

Seasonal climate forecasts will not influence all farm management decisions. When forecasts do have potential, they should not be seen as a tip for a horse race but rather as information that feeds into risk management. Perfect knowledge about the future climate would mean that there was no need to focus on climate as a source of risk. From a risk management perspective, it is useful to think of uncertain rainfall variability in three categories:

When there is an El Nino like the growing season of 2015 or a negative Indian Ocean Dipole (IOD) like 2016 the predictability of rainfall improves, whereas in years like 2017 and 2018 the lack of strong climate drivers makes prediction difficult.

At the time of writing (6 June), it is important to start with ‘we are unsure’. As shown in Figure 1, the climate drivers are neutral and current modelling is suggesting that they will stay neutral.

Figure 1. Early June forecast for remainder of year based on key climate drivers.

Figure 2 looks at the chance of rainfall being in different decile ranges for ENSO, IOD and neutral years. This shows that neutral years have slightly less emphasis on rainfall at Snowtown, for ENSO and IOD category. 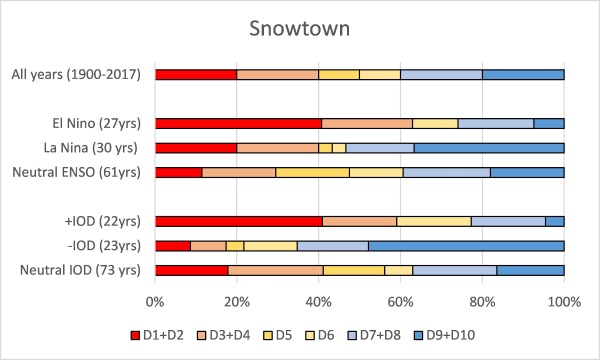 Growers and advisers should check for updates as the season unfolds. As Annie Duke points out, whether playing poker or making a business decision, the first step is to say ‘I’m not sure’ but also to make sure you don’t stop there. Saying ‘I’m not sure’ is very different to saying ‘I have no idea’ or ‘I know nothing’.

In a variable climate, taking time and slowing down is important to improve the process of decision making (what is the best information available at the time, what outcomes are possible, how can we improve them).