In the medium and high rainfall zones of south-eastern Australia, naturally dense clay subsoils are thought to limit dryland crop yields by restricting the movement of air and water and limiting root growth, especially those that have high levels of sodicity. Subsoil manuring is a technique that has been developed to increase yields on these soil types through deep incorporation of nutrient-rich organic matter. Significant and prolonged grain yield increases have been reported after subsoil manuring with 20t/ha of organic amendments such as lucerne pellets or poultry litter (Gill et al. 2008; Sale 2014).

However, it is unknown whether these yield increases are due to the amelioration of subsoil constraints (e.g. sodicity, alkalinity or boron toxicity), the nutrients supplied by the amendment, or some combination of both factors. Because of the large amounts of nutrients contained in amendments such as poultry litter, subsoil manuring can potentially have both an amelioration and fertilisation effect on crop yield. In order to separate these effects and attribute yield responses correctly, experiments require appropriate design with specific treatments.

The complete set of treatments required to separate the nutrition and amelioration effects of subsoil manuring on crop yield is shown in Table 1.

Table 1. Tillage and amendment treatments needed to separate effects of subsoil manuring on yield due to increased nutrition or amelioration of a soil constraint (adapted from Celestina et al. 2019).

The deep incorporation of organic amendments (i.e. subsoil manuring) needs to be compared to a surface-applied amendment control and a synthetic fertiliser control, where the same rate of total nutrients and same type of amendment is applied to both the subsoil and the soil surface. These treatments allow attribution of yield increases to either subsoil amelioration or mineral nutrition by separating the carbon or biological effect of the amendment (e.g. an improvement in subsoil structure) from the fertiliser effect of the added nutrients. If subsoil manuring is ameliorating the physicochemical constraints in the subsoil then the deep placement of organic amendment should increase crop yields over and above those achieved with surface broadcast amendment or synthetic fertiliser placed on the surface or in the subsoil.

There are several difficulties with this comparison due to differences in the amounts and release rates of nutrients in the different amendments. The nutrient rates in the synthetic fertiliser treatment are matched to the total nutrient content of the chicken litter. Very high rates of fertiliser N, P & K are rapidly soluble and may have toxic effects on the crop; despite this, no symptoms of toxicity were reported in the experiments described below. In addition, applying the amendments to the soil surface or the subsoil will affect how quickly they are broken down and nutrients released. These factors will inevitably confound the results of these experiments to some degree, but the most appropriate design is the balanced two-way factorial experiment with ±deep tillage and ±amendments described in Table 1.

Eight field experiments were conducted on a range of soil types across the medium and high rainfall zones of south-eastern Australia between 2014 and 2016. The experiments, located at Westmere (Victoria) and Hart, Bute and Clare (South Australia), tested the treatments described in Table 1. Experiments compared the surface and deep placement of 20t/ha poultry litter and included an inorganic fertiliser treatment where macronutrient rates and placement were matched to total nutrient levels contained in the poultry litter (kg/ha: 594-634 N, 103-295 P, 266-406 K, 83-92 S). All sites received basal N, P and S at seeding and in-crop N every year.

The eight experimental sites used in this study covered four soil types and all had subsoil constraints that were thought to limit crop yields (Table 2). Every site, except for the Chromosol at Clare West, had moderate to high exchangeable sodium percentage (ESP) indicative of sodic, dispersive subsoils (ESP > 6%). Alkalinity and boron toxicity were present in the South Australian soils, and all eight sites had very low soil organic carbon below the topsoil layers.

Table 2. Description of soil types and subsoil constraints at the eight sites used in this study.

A range of annual crops (canola, wheat, barley and lentil) were sown at the eight sites between 2014 and 2016 (Table 3). Seasonal conditions were dry across all sites in 2014 and 2015, with some significant heat events during 2015. The 2016 season was very wet but there was no waterlogging reported at any of the sites. The experiments at Clare East and West were destroyed by a bushfire in 2015.

Table 3. Crops sown and seasonal conditions at the eight sites used in this study.

Over 15 sites x years, subsoil manuring did not increase grain yields compared with any other treatments and there were no amendment × placement interactions on crop yield that would be indicative of amelioration of subsoil constraints.

The grain yields of amendments applied to the subsoil by deep ripping and those broadcast on the soil surface were the same (Figure 1). In other words, there was no benefit of deep placement of poultry litter or fertiliser over surface broadcasting the same amendment. Hence, it is likely that subsoil manuring was either not effective at overcoming any constraints present at these sites or the constraints were not evident in the seasons experienced. 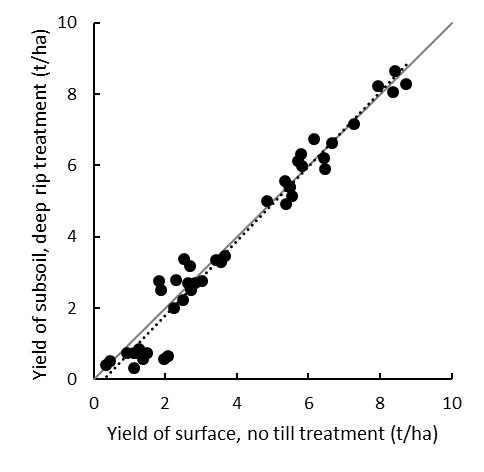 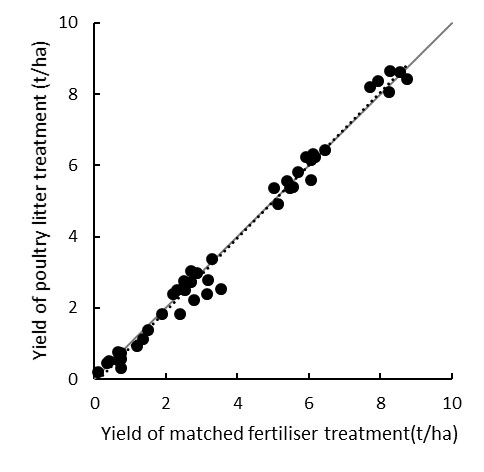 Positive grain yield responses to the addition of 20t/ha poultry litter or equivalent synthetic fertiliser occurred only when grain protein levels were <10.6% (Figure 3), indicating that yield increases were likely due to alleviation of N deficiency. Apart from one site year, at all sites where fertiliser was applied to ensure N was non-limiting, crop yields did not increase as a result of the application of any amendments. Haying off (i.e. noticeably reduced yield and increased grain protein) was frequently observed when N supplied by the poultry litter or fertiliser amendments exceeded the requirements of the crop. In addition, grain protein and canola oil responses indicated a substantial and long-lasting (2-3 years) N-fertiliser effect of both the poultry litter and synthetic fertiliser treatments.

Figure 3. Difference in cereal yield between addition of amendment (poultry litter or matched fertiliser) and the full control of no till, no amendment, in relation to grain protein concentration of the full control. R2 = 84% (adapted from Celestina et al. 2018).

Under the conditions of this study, differences in crop yield were attributed to nutrients (particularly N) in the amendment, and not amelioration of the subsoil. Yield responses to subsoil manuring across the eight field sites in this study were in accordance with crop yield responses to N fertiliser. Yield increases occurred in seasons with high water-limited yield potential and/or low soil mineral N and fertiliser N supply (such as at Clare East and West in 2016), and yield responses were negative or negligible in seasons with low water-limited yield potential and/or where supply of soil mineral and fertiliser N exceeded the water-limited demand of the crop (such as at Westmere in 2015).

The research undertaken as part of this PhD project was made possible by the significant contributions of growers through both trial cooperation and the support of the GRDC. The authors would like to thank them for their continued support.

The authors would also like to acknowledge the staff at Southern Farming Systems and Hart Field Site Group who carried out the field experiments described in this paper.