Effect of heat stress on canola grain yield and quality

Canola (Brassica napus L.) is an economically important oilseed globally (FAOSTAT 2013) and the third most economically important crop in Australia, contributing $2.67 billion to the Gross Domestic Product. Abiotic stresses, such as elevated temperature and moisture shortage, particularly during flowering, result in significant yield loss (Morrison and Stewart, 2002). With the projected climate change, the frequency of extreme climatic events is expected to increase (IPCC, 2007), exacerbating the impact of abiotic stress. Canola is notably susceptible to heat and drought stress at meiosis, coincident with late bud stage and also during flowering (Angadi et al. 2000; Annisa et al. 2013), with heat stress most evident when temperatures above 27ºC occur between bolting and reproductive development. Specifically, short periods of high temperature at the pre-flowering and flowering stages can reduce grain number and grain yield, allied to floret abortion (Morrison and Stewart, 2002; Annisa et al. 2013).

There are limited reports on canola heat stress research — most of the research has been undertaken in controlled conditions in growth chambers where flowers are exposed to a constant high temperature during similar growth stage. However, in the field environment, all the plants are not exposed to the same heat intensity, resulting in seed setting from non-stressed flowers, particularly in the crops with indeterminate growth habit. Field-based heat stress experiments focused on different sowing dates, which are generally confounded by differences in the insidious effects of temperature, water stress and vapour pressure deficits, therefore limiting the wider application of experimental results. A reliable method of imposing heat stress in the field environment, for research purposes, without impacting on other environmental variables, is therefore needed.

More recently, a novel method of imposing heat stress in the field environment has been developed and applied to wheat and lentil research (Alexander et al. 2010; Talukdar, 2014; Nuttal et al. 2015; and Thistlewaite 2017). Thistlewaite (2017) used heat chambers to impose heat shock at anthesis in wheat and reported a reduction in grain number allied to pollen sterility. Alexander et al. (2010) used heat chambers for imposing heat stress of 35°C in wheat, raising temperatures by up to 12°C above ambient temperature. Nuttal et al. (2015) reported a variation of 5°C within the chamber while targeting a higher temperature of 38°C and achieved a yield reduction of 13% during post-anthesis heat stress in wheat. However, in the above studies, a smaller chamber size was used (<1m2) which was difficult to manage in canola canopy and non-portable chambers make the experiments laborious. Therefore, the aim of study was to develop and test heat chambers (2.5 L x 1.8 W x 1.2 H metres covering 4.5m2) in canola. This is the first report on using heat chambers in canola to simulate heat stress in a field environment.

The critical growth period for canola has been determined as 300 °Cd after first flowering and extends up to 400 °Cd (Kirkegaard et al. 2018). During the critical period, yield formation is most affected by seed number, allied to both reduction in pods/m and seed number/pod and partial compensation with increase in seed size. Heat stress studies in canola show that both seed number and seed size are affected by heat stress. However, there is little information on the sensitivity of reproductive development to heat stress. A narrow window of 1–2 weeks post- first flower is considered as most sensitive to heat stress (Angadi et al. 2000), whereas Gan et al. (2004) reported pod development as most sensitive to heat stress. Therefore, the present study reports the effect of heat stress on canola yield, yield components and quality and identifies the most sensitive stage to heat stress during reproductive development. To understand the interaction between heat stress and water availability, two water regimes were established.

A field experiment was conducted at Wagga Wagga Agricultural Institute located at 35.01379ºS latitude and 147.1940ºE longitude. Soil at the experimental site was red brown chromosol with pH Ca 5.3 and soil nitrogen (N) 75kg/ha at the time of sowing. The experiment was sown on 7 May 2018 with the variety ATR Stingray. To establish the different water regimes, four irrigations (175mm total) were supplied to wet plots using drip lines. All the crop husbandry operations were carried out as per best management practices for canola. Plot yield, biomass, thousand seed weight, seed number and harvest index (HI) were assessed from 1.5m² samples from each plot.

Eight chambers (2.5 L x 1.8 W x 1.2 H m) were constructed with Suntuf Sunlite twin wall polycarbonate clear sheets fitted in a metal frame. The heating was provided by two standard 1200 W fan heaters in each chamber, with the power in the field being supplied by a 6 KVA generator. The heaters drew fresh air from outside the plots. A ceiling fan was used to ensure that heated air was evenly distributed through the chamber. A commercially available thermostat was used with extended thermocouples to control the heaters. Temperature and humidity inside the box were monitored at one-minute intervals using a TinyTag Plus2 temperature and humidity logger placed inside a small radiation screen.

A randomised complete block design with two heat treatments (Control vs Heat stress 35ºC), seven timings of heat stress (before the start of flowering till end of flowering), two water regimes (wet vs dry) and four replications were used. When 50% of the plot reached first flowering, heat treatments (35ºC) were applied for eight days. Each chamber enclosed six rows of plot for a length of 2.5m. The chambers were placed on the plots at 11.30am, then the heaters were switched on at 12.00pm. The chambers were then heated to 35°C, the time taken for this dependent on the ambient conditions. The heaters were turned off at 3.30pm and the chambers removed at 4.00pm.

Days to first flowering (DAFF) was recorded when 50% of the plot had one open flower on the plants and thermal time was calculated using a base temperature of 0 ºC. 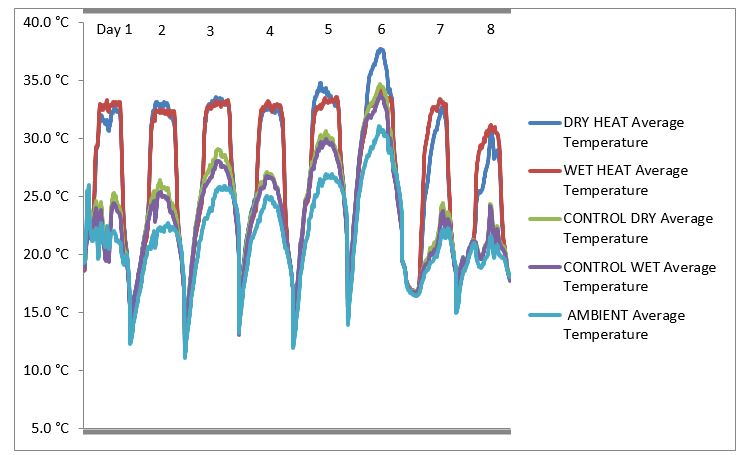 The temperature imposed for eight days within the chamber shown for heat treatment (T5) i.e. 400-550 °Cd after first flowering. Ambient temperature is also shown to indicate the increase in temperature in treated plots compared to control plots.

Effect of heat stress on grain yield and yield components 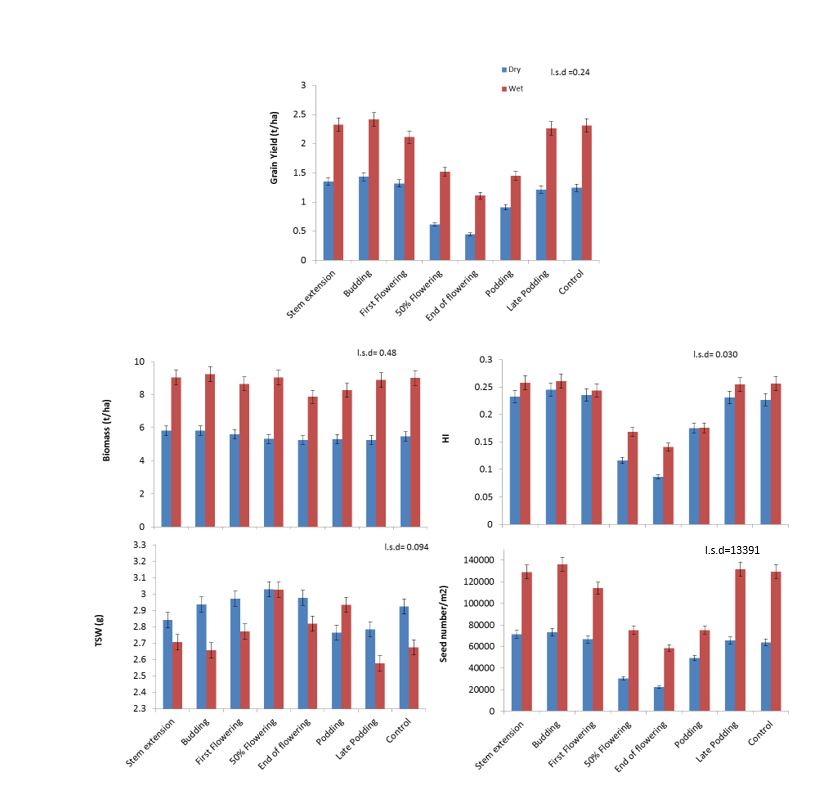 Figure 3. Effect of timing of heat stress on oil and protein percentage in canola under dry and irrigated treatments.

Heat stress can be applied to canola plots successfully using specially designed portable heat chambers. Grain yield or quality was not reduced by heat stress until the period commencing around 100º Cd after flowering. Grain yield, yield components and oil quality significantly reduced when heat stress occurred at 400–550 ºCd i.e. end of flowering and grain formation stage. In canola, the critical period sensitive to heat stress is from 50% flowering to mid pod formation stage. Portable heat chambers can be used to screen varieties for heat tolerance in the field which will be critical for breeding heat tolerant varieties in the future.

Thistlewaite, R. (2017) Identification of genetic variation in heat stress, genotype screening for and mechanism of tolerance in wheat. PhD Thesis.