This experiment was conducted at Charles Sturt University, Wagga Wagga, in November 2015. Soil samples were collected from the top 40cm in layers (i.e. 0-10cm, 10-20cm, 20-30cm and 30-40cm) near Holbrook, NSW. The soil was classified as Yellow Chromosol (Isbell, 1996). The initial pH was 4.54, 4.15, 4.46 and 5.15 in the soil layer 0-10cm, 10-20cm, 20-30cm and 30-40cm, respectively. The soil profile was reconstructed into a pot which was built from PVC pipe (10cm diameter and 50cm length), maintaining the order and thickness of each layer, except for the 30-40cm layer which occupied 17cm at the bottom of the pot. Fine ground lucerne or lime was incorporated in layers from 0-30cm by single or double or triple layers. The acid soil sensitive wheat variety Axe (Australian Grain Technologies Pty Ltd, Glen Osmond, SA) was grown and the shoot and roots dry biomass and soil pH of each layer were determined at 31 days after sowing.

No improvement on either shoot or root biomass was detected in any of the treatments, even though the wheat variety Axe is considered sensitive to soil acidity. Lucerne incorporation resulted in a significant (P<0.05) reduction of shoot and root growth compared to the lime treatment and this effect was exacerbated if the lucerne was placed in the top soil layers.

Table 1. Effect of placement of lime and ground lucerne pellet (LP) amendments on mean pH in CaCl2 of soil layers of reconstructed soil columns of acidic soil at 31 days of the experiment.

* = indicates significant differences (LSD = 0.196, at P<0.05) of a pairwise means comparison of the pH between the layer of the control pot (unamended layers pot) and the corresponding layer of the amended pots — where not indicated, it is not significantly different. This LSD value is a conservative statistic for pairwise means comparisons across soil layers and treatment combinations.

Soil samples were collected at the Ferndale site at Dirnaseer, west of Cootamundra, NSW. The soil was classified as red chromosol (Isbell, 1996). The initial pH was 4.83, 4.18, 4.12 and 4.62 in soil layer 0-10cm, 10-20cm, 20-30cm and 30-40cm, respectively. The soil profile was reconstructed as described in Experiment 1. The lucerne pellets were cut into ~2cm (LP1), ~1cm (LP2), ~0.5cm (LP3) and 0.1-0.2cm (LP4) and incorporated into the top 5cm of soil column, whereas lime was incorporated into the top 10cm. For treatments with the combination of lucerne pellets and lime, the incorporated depths were kept the same. An acid soil resistant wheat variety Dart (LongReach Plant Breeders Management Pty Ltd, VIC, SA) was used in this experiment. Shoot, root dry weight and soil pH were measured at 14, 21, 28 and 35 days after sowing. 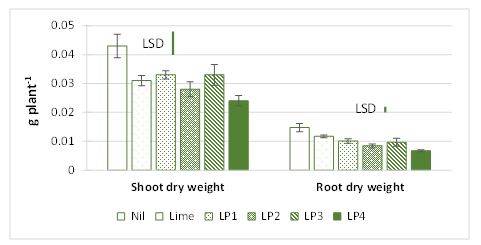 A field experiment was established in 2018 at a Ferndale site at Dirnaseer, west of Cootamundra, NSW, (34o38’S, 147o49’E). The experiment was a split-plot design with two wheat varieties as main plots and four soil amendment treatments as subplots, replicated four times. The four treatments were no addition of the amendment (Nil); addition of 2.5t/ha lime (Lime); addition of 15.0t/ha lucerne pellets ~0.5cm (LP) and, addition of 15.0t/ha lucerne pellets ~0.5cm in combination 2.5t/ha lime (LP+L). The amendments were incorporated into ~5cm of the soil profile. The two wheat varieties were an acid soil sensitive variety, Lancer (LongReach Plant Breeders Management Pty Ltd, VIC, SA) and the acid soil resistant variety Gregory (Queensland Department of Primary Industries and Fisheries (DPI&F) within the Enterprise Grains Australia (EGA)). Soil pH was measured before, at three months, six months after incorporation and at harvest time at depths of 0-5cm, 5-10cm, 10-15cm, 15-20cm, 20-30cm and 30-40cm. Grain yield was measured with quadrat cut. 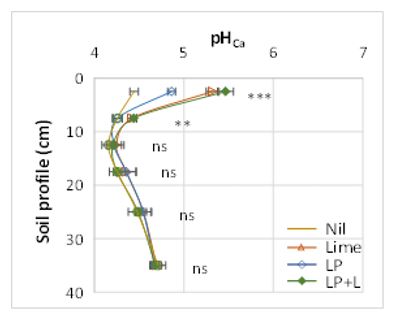 Thanks to Richard Lowrie and Adam Lowrie (DPI NSW technical staff) for assistance in the field work, and Grace Kaveney, Jordan Bathgate and Matthew Champness for help in soil sampling. Special thanks to the Ministry of Agriculture and Rural Development, Vietnam, for the PhD scholarship for Hoang Han Nguyen.