An independent assessment at the Agricultural Machinery Research and Design Centre at the University of South Australia has concluded “The AquaTill Liquid Coulter demonstrated a high potential for crop residue cutting and is confirmed to be a great technology fit for assisting residue handling in no-till planting applications, particularly in wet stubble and soft soil environments where traditional mechanical coulters fail”.

AquaTill technology uses a fine stream of liquid travelling at three times the speed of sound that can cut through living or decaying plant material. The liquid stream is generated using an Ultra-High-Pressure (UHP) pump from Flow International Corp. that operate at more than 50,000 psi (3,800 bar).

An evaluation of AquaTill UHP waterjet cutting technology for use as a liquid coulter in no-till seeding has confirmed it has high cutting capability on wheat straw and is a ‘great fit’ for residue handling in no-till planting applications.

The potential value of this technology, conceived and initially developed by SANTFA, is reinforced by new data showing it is particularly effective in wet stubble and soft soil environments normally considered the most challenging for seeding/planting operations and in which traditional mechanical coulters often fail.

The technology was found to operate most efficiently when wet residue was placed under moderate compression, providing a valuable pointer to development of machinery to apply this technology in the field.

Waterjet cutting technology is well suited to wider row spacings, where a given cutting capacity can be achieved with relatively less water per ha. Results from this research, undertaken by the Agricultural Machinery Research and Design Centre at the University of South Australia and funded by GRDC, indicate that a nominal 150 L/ha volume of water could sustain straw stem cutting capacities of up to 12.5 t/ha, 19 t/ha and 35 t/ha at 300 mm, 500 mm and 1000 mm row spacing respectively.

When used as a liquid coulter, an AquaTill unit is set up so the high-velocity cutting stream penetrates vertically downwards, slicing through surface residue to allow clean access the underlying soil (Figure 1). 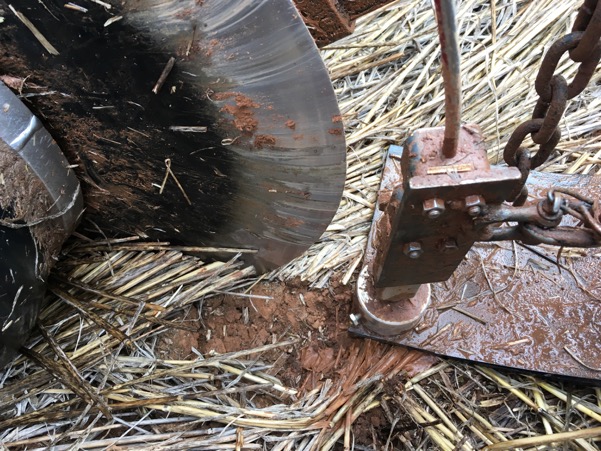 Residue cutting capacity is defined as the quantity of biomass residue (t/ha) able to be fully cut under a specific set of conditions. The project selected four machine factors (pressure, nozzle size, stand-off distance and speed) and three straw factors that could realistically be controlled in the field for evaluation in laboratory experiments.  The aim was to quantify residue loads that might be expected to be adequately cut under different conditions. The researchers then set out to evaluate the machine factor relationships affecting the efficacy of UHP waterjet nozzles cutting cereal stubble loads under conditions representative of no-till field conditions at seeding. This was done using multiple layers of uniform straw stems calibrated to a known stem load quantity (t/ha).  This provided a repeatable basis for generating data on the technology’s residue cutting capability.

The straw was laid in stubble-holding trays, designed and built by the research team, each with three separate chambers able to hold 25, 40 or 50mm depth of uniform stubble stems, between a top and bottom interlocking plate assembly (Figure 2). This configuration allowed a large number of cutting locations to be assessed in each test.

Once they were uniformly filled with straw stems, the chambers designed with open-ended longitudinal slots to accommodate the waterjet were able to be compressed to an adjustable level of up to 62%. 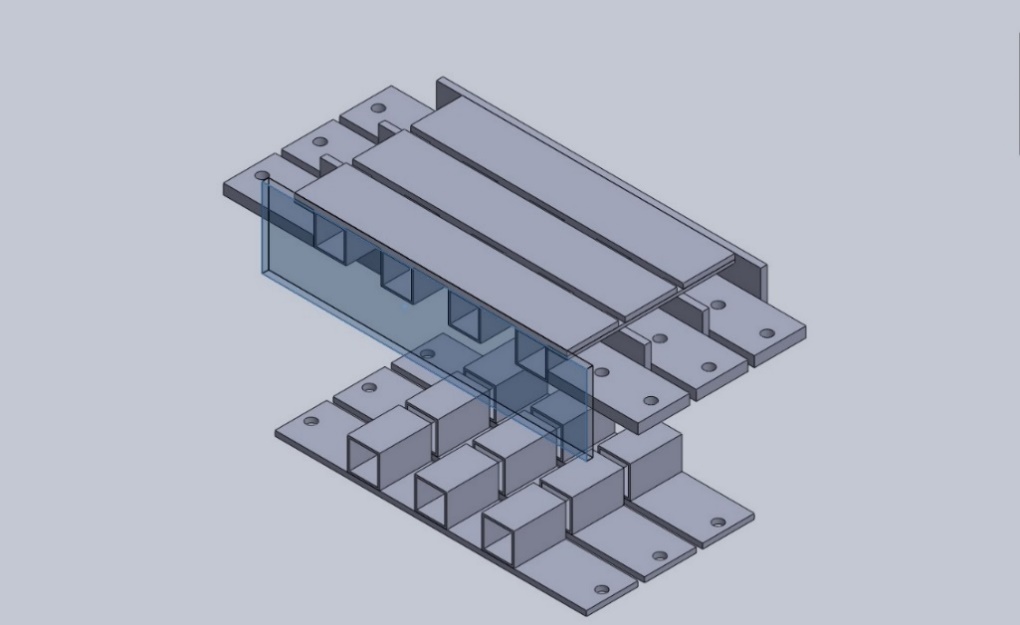 Figure 2. 3D view of the holding tray with interlocking plates for adjustable compression

Two trays were built, one that oriented straw at 30° to the line of cutting and one that held it at 90° to the direction of travel (Figure 3). Figure 3. Top view of holding tray after cutting with top plates fitted (left) and removed (centre). The bottom sections are designed to locate the straw stem axes at 90° (centre) and 30° (right)

The experiments were conducted using 2016-season baled wheat straw that had been stored under cover and which had not been subject to wetting. Internode stem portions of uniform width (diameter) were selected from loosened bale biscuits (disregarding any obvious ‘outlier’ sizes) and cut to a length of 125 mm to provide a source of uniform stems.  Nodes were excluded to maximise uniformity of the straw specimens.

The stem cross-sections were mainly ‘flattened’ due to the harvesting and baling process, but their physical uniformity was deemed suitable for laboratory evaluation.

An average of 33, 53 and 66 stems were required to uniformly fill the three chambers in each tray before any compression was applied. A constant number of straw stems per chamber depth was part of the methodology used to increase the uniformity of chamber samples and the efficiency of experimental runs. It also enabled assessment of cutting capacity based on a known number of stems.

An average stem unit weight (mass per unit of length) was calculated using measurements of the length and weight of 200 random stems in their dry state. This figure was used to convert the number of stems per chamber to a stem weight per chamber that was then used to estimate an equivalent residue stem load per ha. This provided a reference link between paddock stubble load (t/ha) and the number of stems in each experiment.

This residue load parameter was named ‘straw stem load’ and quantified in units of t/ha.

The cutting process was carried out by driving the straw-holding trays at a given speed through a stationary waterjet cutting nozzle operating at specific pressures and flow rates (Figure 4).

The height of each straw tray was accurately set to achieve a known nozzle stand-off distance - the distance between the nozzle and the residue – with the cutting slot carefully centred to the nozzle orifice and aligned to the travel direction.

The nozzle was powered by an ultra-high-pressure (UHP) triplex pump from Flow International rated to 60 thousand pounds per square inch (kpsi - 414 MPa). The pump used in the experiments had previously been modified by SANTFA to be driven by a tractor PTO, which was the power source for the research project (Figure 5).

The moisture content of the air-dried stems averaged around 8% (wet basis), which became the dry straw moisture reference. Wet straw was generated by immersing bunches of prepared stems in water for 45 minutes, allowing them to drain for 15 minutes then keeping them in a sealed container during the following 3-4 hour testing period. Test periods were minimised to lessen any interference from environmental factors such as relative humidity and temperature.

The wetting treatment increased the straw stem moisture content to 69% (wet basis) on average, which revealed the high capacity of wheat straw to absorb water (an average of 2.2 times its dry weight).

Compression treatments were applied by tightening the interlocking plate assembly against spacers set at pre-determined levels. In uncompressed treatments the top plate acted only as a lid over the straw stems with minimal compression (<3%) to minimise unwanted free movement of straw during cutting.

The effect of pressure on straw cutting capability was assessed using a response curve technique in which a simple curve-fitting procedure was applied to results from single replicate tests conducted at additional pressures (namely: 50, 45, 40, 35 and 25 kpsi).

The same response curve methodology, which enables a conclusion to be drawn from the results of randomised single-replication tests conducted over the targeted range, was also used to assess the impact of straw stem compression intensity.

This assessment was carried out with wet straw (moisture content (mc) = 69 %), with stubble angle to direction of travel (β) = 90° and percent of residue compression (Δ) = 50%; parameters considered to represent realistic field conditions.

The straw chamber depths were set at either 25, 40 and 50mm to ensure unaffected straw remained beyond the depth of cut achieved, with the range of nozzle capacities.

Figure 6 shows the relationships of cutting capacity with UHP water pressure for a subset of four stem conditions for stems oriented at 90° to the angle of travel at a given nozzle size (0.008” = 0.2mm), stand-off distance (5mm) and speed (6km/h).  The graphed data show: Figure 6. Cutting capacity relationships with water pressure for a subset of four stem conditions with the stems at 90° to the angle of travel and constant machine settings

These results, which are consistent with the literature knowledge (Ligocki and Harms, 2003), show that residue compression strongly influences cutting performance, with major implication for the design of machinery for field use of liquid coulter technology.

The impact of compression on cutting efficacy is explained by the fact that the gaps (spaces) between and within stubble diffuse the energy density and coherence of the UHP waterjet, resulting in significant loss in jet power. This effect is highest under loose stem conditions and least under tightly compressed stem conditions. Another mechanism likely to enhance waterjet cutting in compressed straw is the greater exposure efficiency of stems held under pressure with their flattened sides exposed to the jet and unable to move away during cutting.

These data also suggest that timing paddock use to target moist residue can significantly assist with maximising cutting capacity, especially under compressed residue conditions. This is explained by there being less power loss due to jet diffusion because there is less air between and within the stubble stems and greater stem inertia (wet mass = 3.2 x dry mass) which reduces straw movement under the water jet.

Its ability to perform better in damp conditions represents a critical advantage for this technology because wet residue typically poses the greatest seeding-time challenges to mechanical cutting such as by a coulter disc blade and is the common cause of residue hair-pinning that can result in significant crop establishment losses.

The data in Figure 7 shows: 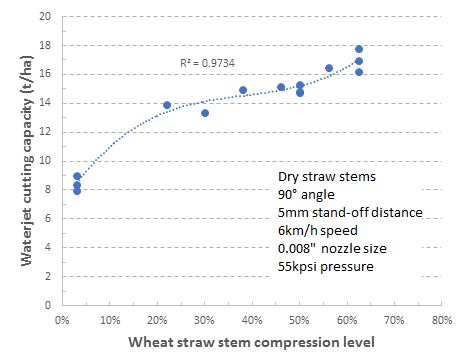 The main implication of these findings is that any machine using this technology in the field will need to be able to apply a certain amount of pressure to the straw at the point of cutting in order to maximise waterjet cutting efficiency. If this optimum pressure varies in different paddock environments, adjustability may be required, particularly since compressing beyond the optimum is likely to increase cost and may induce other stubble management issues such as raking.

While further investigation of interactions between compression level, speed and nozzle size is needed, these results reveal no detectable impact of nozzle stand-off within the 5-70 mm range under the experimental conditions. This finding is very positive, since a short stand-off distance could prove problematic in the field, while being able to set the nozzle further away from the stubble surface may open the way for simpler design options and reduced costs. 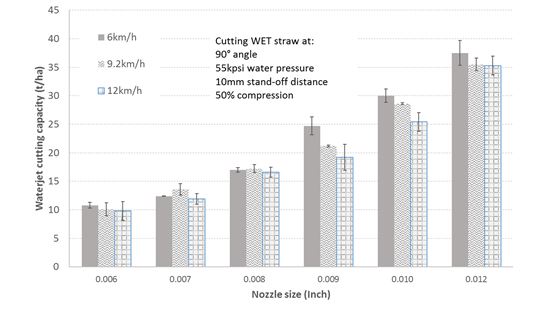 Figure 8. Cutting capacity of a range of nozzle sizes operating at different travel speeds
(NB: Error bars are ±1 standard error of the mean) Figure 9. Mapping of residue cutting capacity vs volume rate at three row spacings for a range of nozzle sizes and forward speeds

The water consumption per hectare for each nozzle was calculated based on their nominal flow rate of 55 kpsi /379 MPa (data supplied by Flow International) and the travel speed at 30 0mm, 500 mm and 1000 mm nozzle spacing to provide summer and winter crop planting contexts.

Importantly, more power is required to achieve the higher flow rates of the larger nozzles.

This graph can also be used to estimate the nozzle size and speed requirements to successfully operate in a particular quantity of crop residue in a field situation.

Also, as the Figure 9 graph originates from laboratory measurements of pre-arranged straw stems, it is expected that a field correction factor (yet to be developed) will be required to account for aspects such as randomness and material variability intrinsic to field residues.